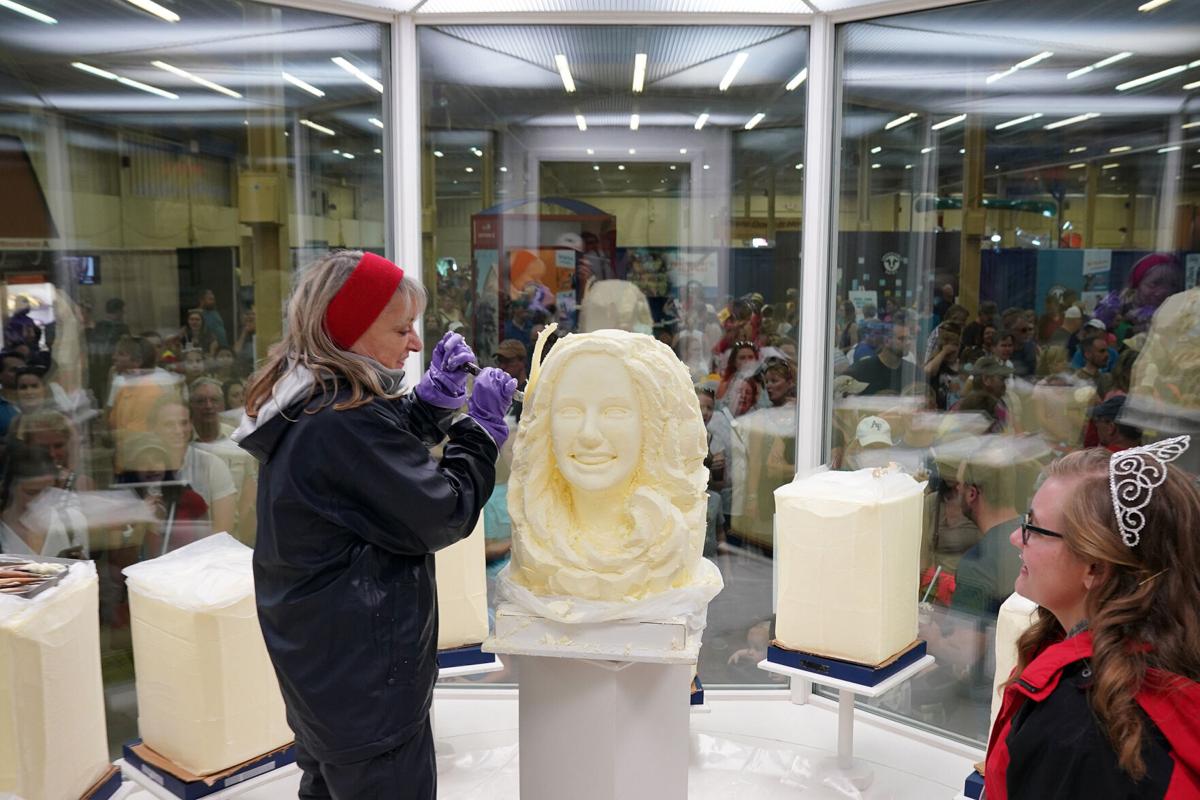 Princess Kay of the Milky Way Rebekka Paskewitz looks on as artist Linda Christensen carves her bust out of a solid block of butter in the Dairy Building at the 2018 Minnesota State Fair. 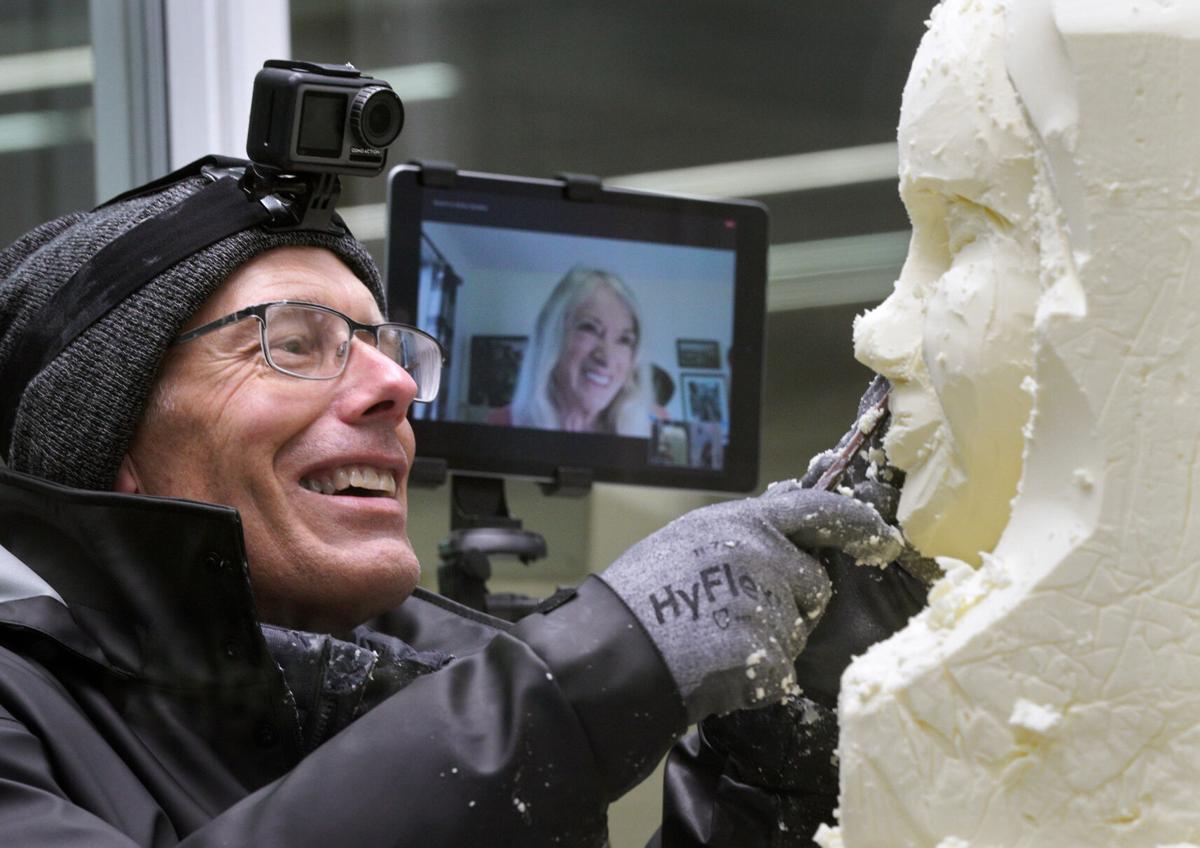 Longtime butter-princess sculptor Linda Christensen communicates via FaceTime to her apprentice, Gerry Kulzer, who was recently working on a butter sculpture.

Princess Kay of the Milky Way Rebekka Paskewitz looks on as artist Linda Christensen carves her bust out of a solid block of butter in the Dairy Building at the 2018 Minnesota State Fair.

Longtime butter-princess sculptor Linda Christensen communicates via FaceTime to her apprentice, Gerry Kulzer, who was recently working on a butter sculpture.

MINNEAPOLIS — For 48 years in a row, Linda Christensen spent each August at the Minnesota State Fair’s butter booth, carving the heads of the state’s dairy princesses out of 90-pound blocks of butter.

During that time, the butter heads evolved from foodstuff to cultural icon, much like Minnesota-made Spam. The golden-yellow princesses are equal parts nostalgic and wacky. They represent beauty, smarts and grit.

Christensen attributes the sculptures’ allure to a combination of factors: the astounding amount of butter that’s used; the material’s pretty, almost translucent glow; the live sculpting, in a cooler, in the middle of August; and the connection so many visitors feel to the state’s agrarian heritage.

“It’s the total package,” Christensen said. “Let me just say that if I was standing in a booth sculpting clay, no one would care.”

This year, the pandemic prohibited the 78-year-old California artist from visiting her former home state, so Christensen’s apprentice, Gerry Kulzer, sculpted in her stead.

Even though the fair was canceled, Kulzer took up Christensen’s traditional position in the rotating refrigerated case, shaping a creamy forehead and shoulder as a livestream audience looked on. After a few hours, he pointed a videoconferencing tablet at his butter bust and asked Christensen for advice.

Christensen noticed a spot where the symmetry was slightly off. “Cut the cheek back and lift the mouth on this side,” she suggested.

Next year, Christensen plans to celebrate 50 years of edible carving by sculpting one last Princess Kay of the Milky Way (the candidate selected as the state’s dairy ambassador). Then she’ll hand her butter knife to Kulzer, who will take over the storied role.

Butter sculpture displays have been a part of the Minnesota State Fair for more than a century, once famously including a life-size replica of Teddy Roosevelt, with his foot on a felled lion’s neck. While other state fairs have butter-carving traditions (Iowa always does cows; Ohio’s subjects have ranged from the Liberty Bell to Darth Vader), Minnesota’s buttery princesses have the most personality.

The Midwest Dairy Association began commissioning butter likenesses of its dairy princesses in 1965 to promote the state’s robust production. Since then, a dozen young women engaged in dairy farming spend a day sitting for their butter portrait each year at the fair.

Among the fair’s top attractions, the butter booth draws huge crowds to watch the carver at work. After the fair, the butter heads have been displayed at small-town restaurants, grocery stores and social clubs. They’ve traveled to speaking engagements and worked their way into local authors’ mystery and romance plots. They’ve even been featured on “Jeopardy” (host Alex Trebek has visited the booth).

In July 1972, Christensen had just graduated from the Minneapolis College of Art and Design when the school’s placement officer recommended her for an unusual sculpting gig: carving butter at the fair.

Her tryout took place a few weeks later, in the butter-booth cooler. The dairy association’s president had brought along his teenage neighbor to model; after a few hours of work, he told Christensen she was hired. “He said, ‘I think you’re going to do just fine,’” Christensen recalled. “I doubt if I was even halfway done with it.”

The first time Christensen carved in front of the fair crowds, she had no idea if she’d be able to finish a whole head in one day or not. “And that, believe me, is the trick,” she added. “The trick isn’t so much butter. The trick is being able to finish a sculpture a day for 12 days running.”

This was just one of the many bits of wisdom Christensen has imparted to her protege, a 51-year-old artist and educator from Litchfield, Minn.

In contrast to working with clay, an additive process, butter is sculpted by taking away. The first cuts into the butter block rough out the general features: brow ridges, cheekbones, eye sockets. The artists work with a kit of kitchen knives and clay tools, including stiff wires for slicing and metal loops for digging.

“It’s a lot like clay, but it’s completely different,” Kulzer said, noting that most people don’t realize that butter has a bit of a grain. Cold butter is also quite hard, Christensen added.

One 1980 butter head remains in storage after all these years, with no plans of going anywhere, said its owner, Donna Moenning (nee Schmidt). “This piece of personal and Minnesota history is at home next to the frozen beef, pork and vegetables in our freezer like it has been for 40 years.”

To some historians, the edible sculptures are a marriage of Minnesota’s creative and agricultural traditions.

“We have lots of music, theater and visual artists, and we also have a lot of cows and corn,” explained Linda Koutsky, co-author of “Minnesota State Fair: An Illustrated History.” “They came together at the State Fair with butter carving.”