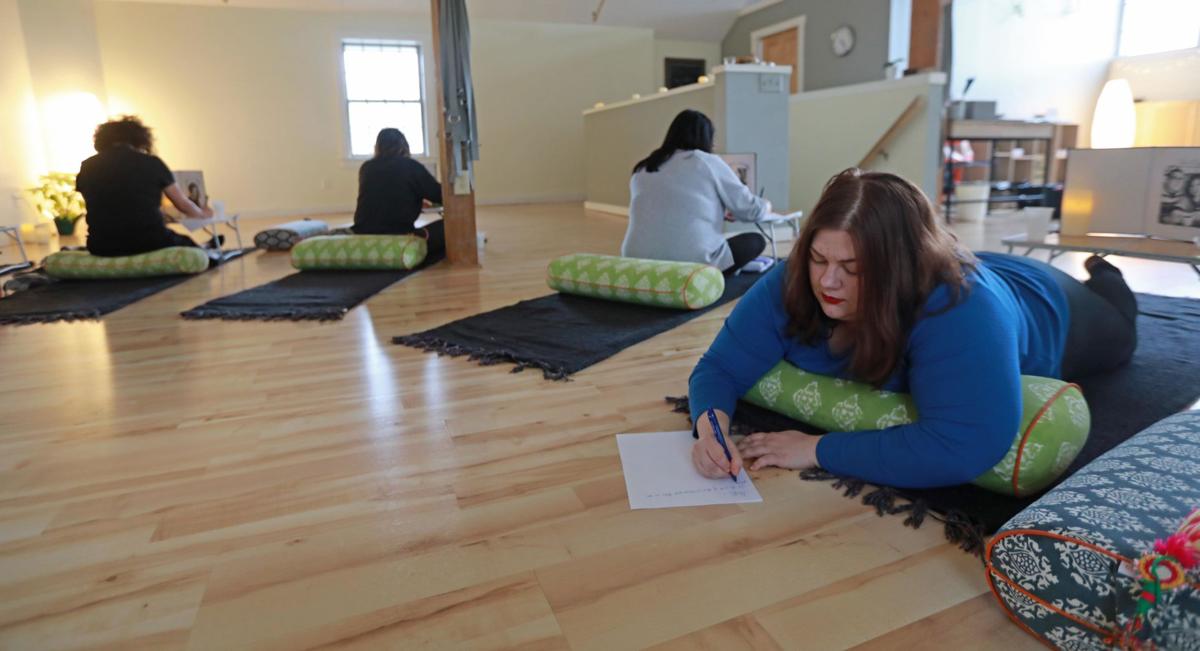 Tara Koger journals her last wishes as part of the living funeral experience. 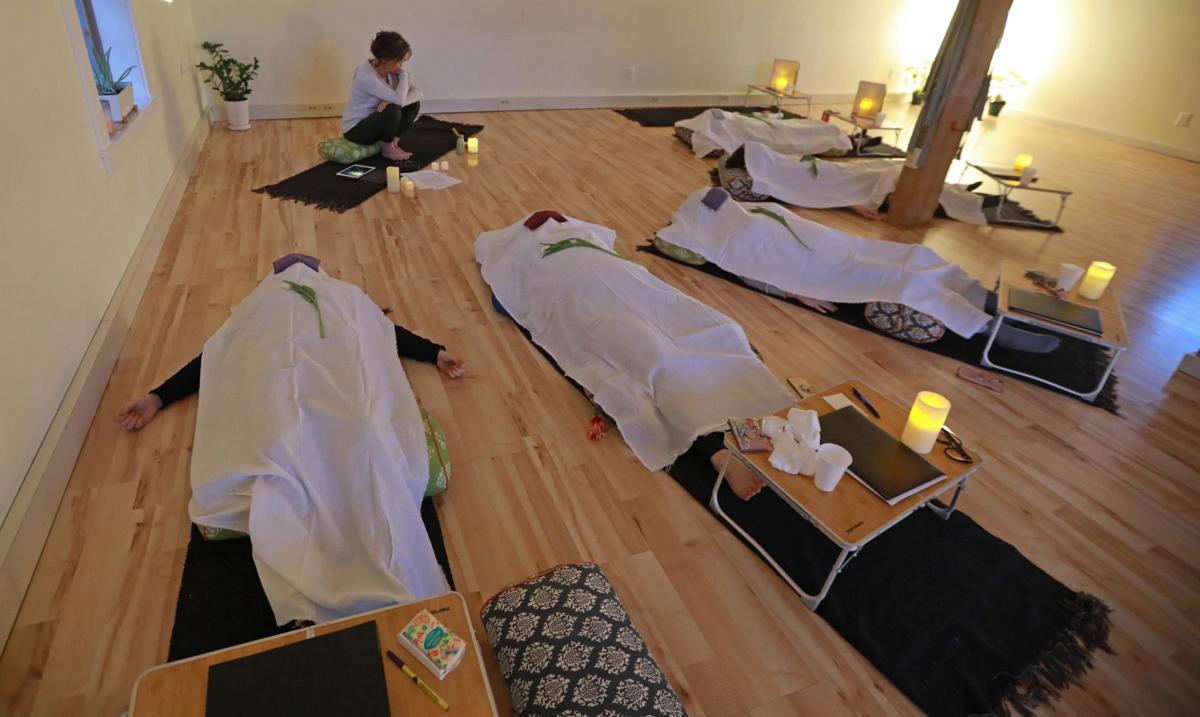 Death doula Donna Baker leads five 'living funeral' participants through one segment of the roughly two-hour guided meditation. Covered by shrouds, they are guided through what should feel like the emotions and physical experience of dying, and then coming back to life. 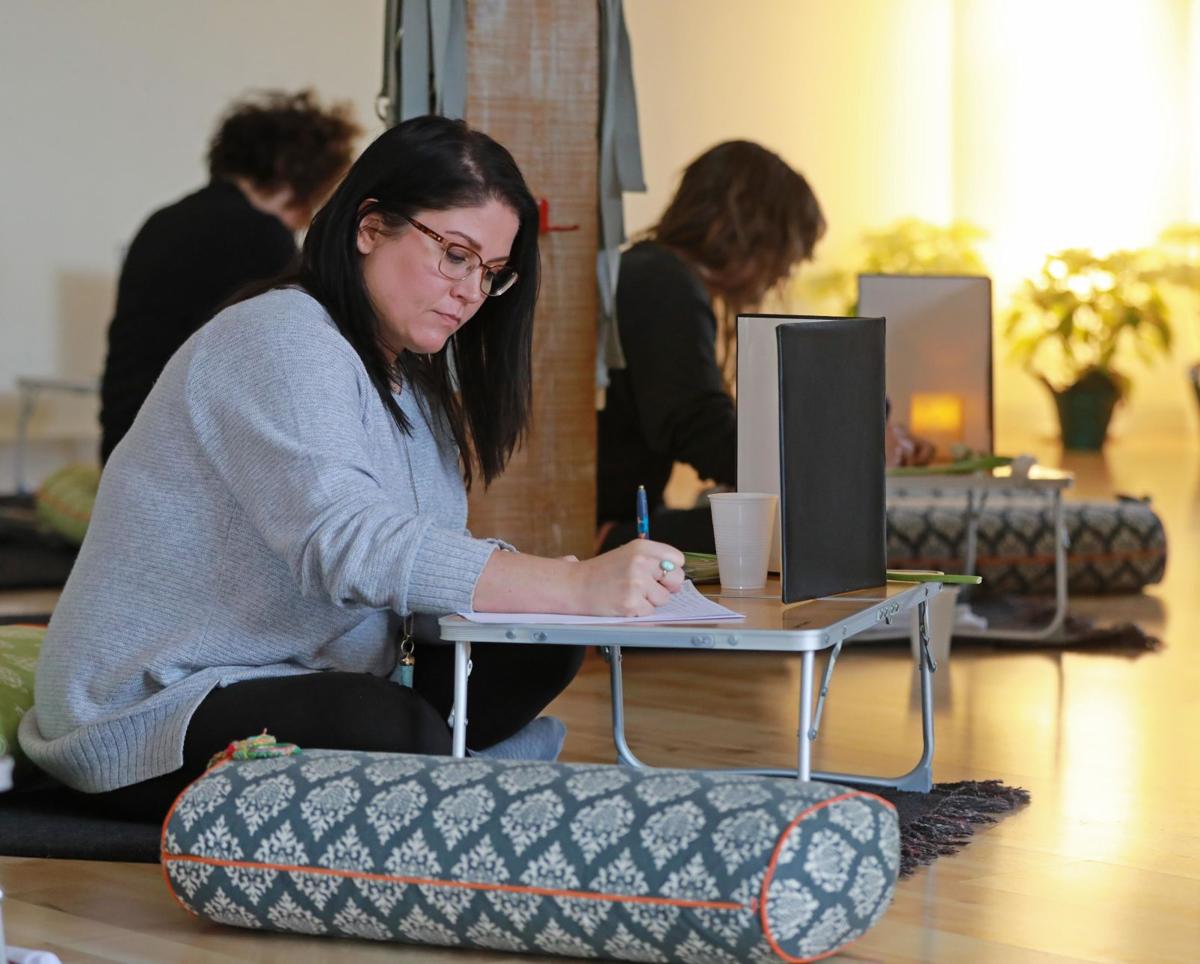 Tara Koger journals her last wishes as part of the living funeral experience.

Death doula Donna Baker leads five 'living funeral' participants through one segment of the roughly two-hour guided meditation. Covered by shrouds, they are guided through what should feel like the emotions and physical experience of dying, and then coming back to life.

Kristen Slangerup has heard about people getting a new perspective on life after a near-death experience.

For the 36-year-old Dublin, Ohio, resident, a living funeral came as close as possible to getting that experience, without the danger and trauma.

“You do get that new take and new approach,” she said.

Slangerup attended a “living,” or mock, funeral hosted by local death doula Donna Baker during her birthday-weekend celebrations in August.

“It was a great way to come into my 36th year, feeling alive and not taking anything for granted,” Slangerup said.

Living funerals, first conducted in South Korea in an effort to prevent suicides by helping people to see the value of their lives, are growing in popularity in the United States.

The about two-hour guided meditation hosted by Baker starts with participants writing last words to loved ones and reading them aloud to a handful of other participants if they so choose. They then lie down, and a shroud is placed over them as they are guided through what should feel like the emotions and physical experience of dying, and then coming back to life.

During a recent class, for instance, Baker had participants breathe as they stretched each limb, feeling their muscles and bones, and had them sink into their yoga, mimicking lifelessness.

“Let yourself be pressed down by the weight of death,” she said. “Lay still, relax. ... There’s no longer anything for you to do but listen to my voice and imagine you’re dying.”

Once she led participants through a simulation of their physical body dying, she guided them through them losing their consciousness.

“Imagine that this consciousness inside you is shrinking,” she said. “You now become completely inert, it’s time to guide your mind to a quiet place. ... Just say to yourself, ‘Yes, I am dying.’”

As they went through the class, a memorial photo sat in front of each participant, with the year of birth and the year of the so-called death: 2020.

Baker was partly inspired to begin hosting the ceremonies last summer after hearing about others’ near-death experiences. Death doulas such as Baker help people at the end of their lives with the process of dying, much as birth doulas help at the beginning of life.

“I just always thought, I wonder if we could sort of re-create that awakening where you feel like you’re done or you’ve lost everything, or you feel like you’ve died and been brought back to life,” said Baker, who founded her private service, Columbus Community Deathcare, in March. “Can we get into the mood where you can have a wake-up call without experiencing that trauma?”

Although contemplating mortality is a large part of the living funerals, those who host them say they are much more about living — and making the most out of life.

Death doula Emily Cross, founder of Steady Waves End of Life Services in Austin, Texas, searched for people hosting living-funeral ceremonies in the U.S. after hearing about the practice in South Korea.

Finding no one, Cross started hosting the ceremonies in Texas in 2017. Now, she trains others to be hosts. Baker is among 13 she has trained, and Cross is teaching four more.

Cross said she does it because she thinks contemplating mortality in a serious way is rare, but important.

“You hear quotes all the time like, ‘Live like it’s your last day’ or ‘You only live once,’ but to sit down and look at your memorial photograph as if you’re already gone and writing your last words, it’s a different experience,” she said. “I think it creates this impetus to live in alignment with your values and your ethics and your hopes and dreams, to feel deeply that it is all temporary.”

Baker said she has heard a variety of responses from participants. One woman decided she was going to leave her husband after the ceremony. Another man got so choked up that he couldn’t finish reading his final thoughts. He later decided to use what he had written as his actual final words, so he put them with his will.

“It’s not a morbid workshop; it’s not a mournful experience; it’s hard, but looking at your life in a really honest and deep way is hard,” Baker said.

One goal is to make death become part of life and not a crisis.

Baker hopes that people leave the ceremony with a fresh start or perspective and the added benefit of having thought about their death long before most people do.

Most of those who attend Baker’s ceremonies aren’t approaching death but are young, healthy people who want to think about death.

“Thinking about mortality can spur tremendous growth in a person,” Cross said.

For Slangerup, reading her final words aloud was cathartic, and, the experience helped her reprioritize her life.

When she “came back to life” during the exercise, Slangerup was overcome with gratefulness to be alive — so much so that she has recommended the living funeral to friends.

“You don’t get a second chance at life,” Slangerup said, “so it’s the closest you can come to that experience of ‘How would I live my life differently if I could do it over again?’”