You are the owner of this article.
Edit Article Add New Article
You have permission to edit this article.
Edit
Home
News
Sports
Opinion
Life
Obituaries
Calendar
Jobs & Classifieds
Lifestyles of Kankakee County
1 of 4 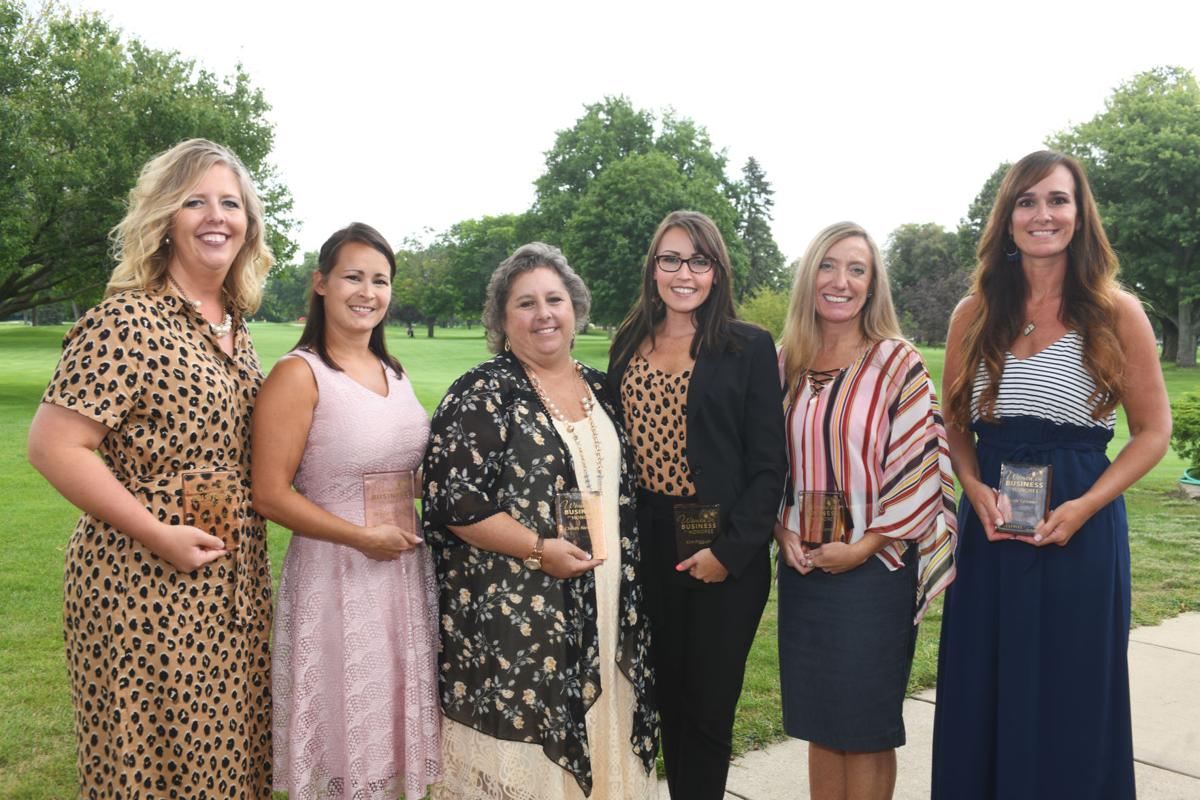 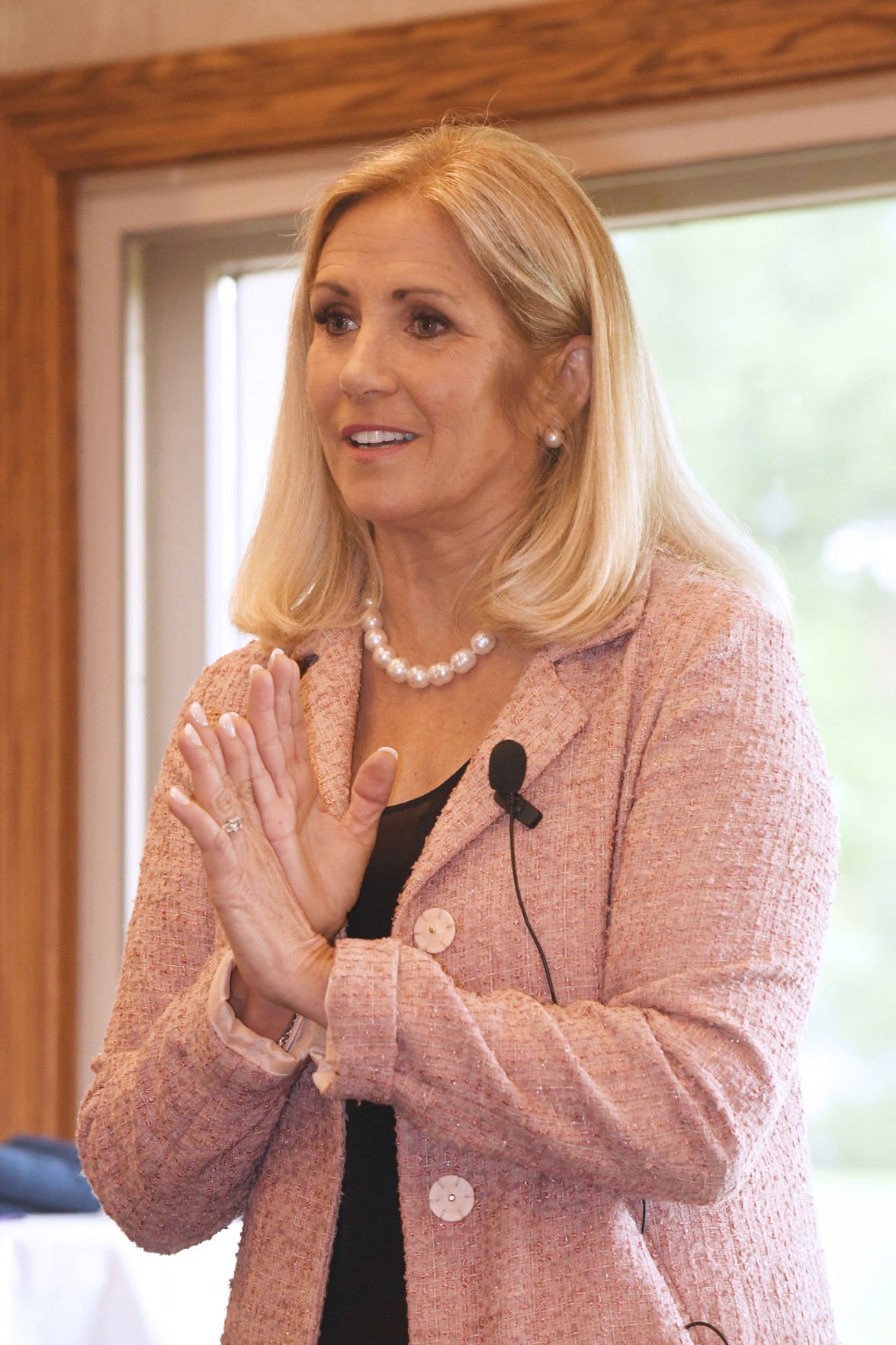 Jeanne Malnati, co-owner of Malnati's Pizzeria and founder of The Culture Group, was the guest speaker during the Daily Journal Lifestyles of Kankakee County Women in Business honoree luncheon Thursday at the Kankakee Country Club. 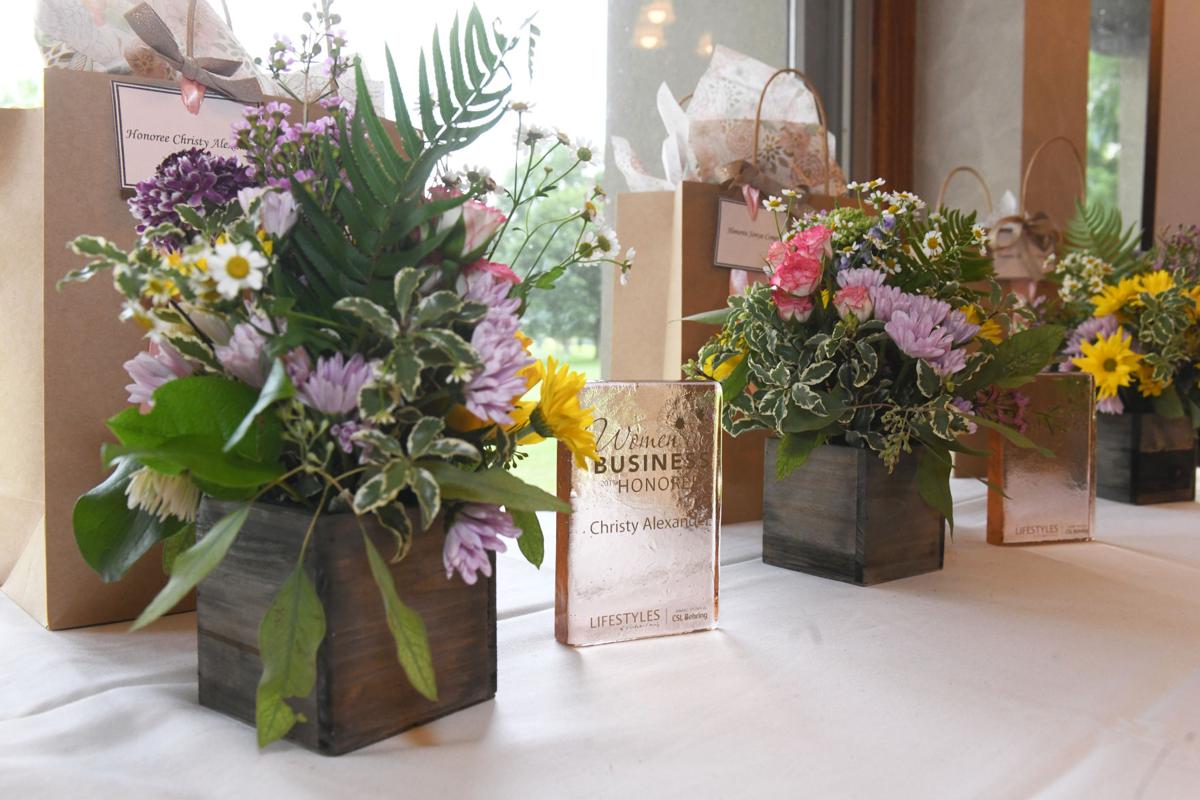 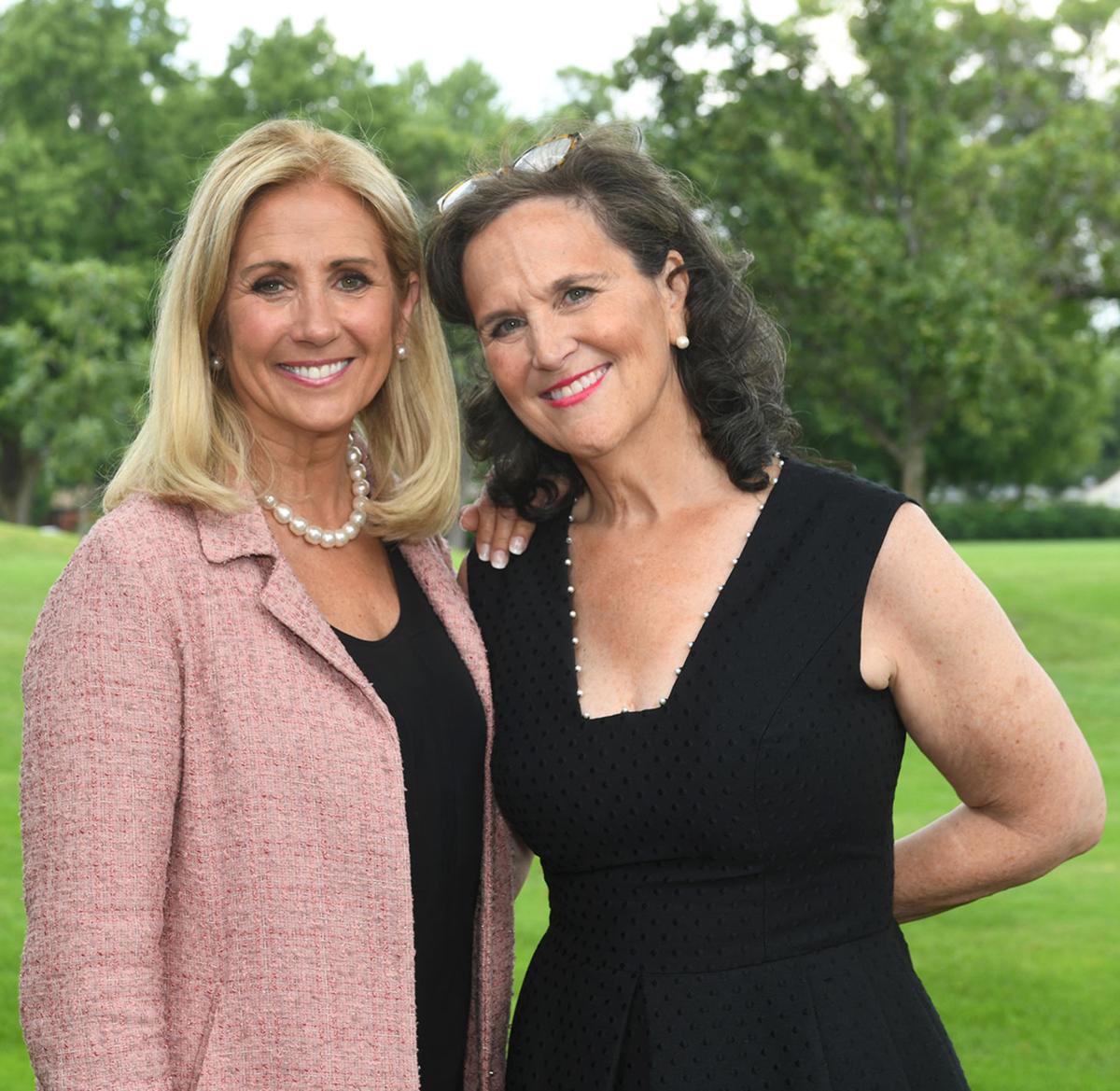 Jeanne Malnati, co-owner of Malnati's Pizzeria and founder of The Culture Group, was the guest speaker during the Daily Journal Lifestyles of Kankakee County Women in Business honoree luncheon Thursday at the Kankakee Country Club.

That was the message from guest speaker Jeanne Malnati during the Daily Journal’s Lifestyles of Kankakee County magazine Women in Business honoree luncheon Thursday at the Kankakee Country Club.

Malnati is co-owner of Malnati’s Pizzeria and founder of The Culture Group.

“Jeanne connects to the human psyche. It’s no surprise to me she would go on to share her inner wisdom,” said Sally Hendron, Daily Journal vice-president of finance, when she introduced Malnati. Malnati and Hendron met and became friends when both were attending Indiana University and in the Delta Gamma sorority together.

“You have the power to change someone’s life,” Malnati said. “Whether it’s someone you know or whether it’s a stranger. Everyone, really see one another. Everyday, let’s spread some love.”

In 2009, Malnati’s youngest daughter, Melissa, was in Africa on a college trip. Malnati and her daughter, Kelsey, went to visit Melissa in Africa, with Malnati bringing a small bag of hearts with her. Halfway across the Pacific Ocean, she had an idea — to hand out the hearts to those who looked as though they were struggling, to people caught doing something kind or to someone who just needed extra support.

On their flight home, the heart bag was empty, but Malnati decided to continue to share them. Today, more than 35,000 hearts have been spread across the world by the Malnati family and other “heart spreaders.”

During the luncheon, Malnati presented each guest with a pewter heart of their own and one to share.

“Take the heart as a reminder of today’s event and that you are loved,” Malnati said. “Take the other heart and spread a moment of joy.”

Malnati and her husband of 40 years, Marc, are owners of the oldest family name in Chicago pizza, Lou Malnati’s Pizzeria. She is founder and CEO of The Culture Group, helping businesses create and maintain thriving workplace environments.

She skillfully frames spaces for the difficult conversations required to build mutual respect and trust in relationships.

“Our honorees represent the community with the spirit they work in,” Hendron said. “You [honorees] are all a force for good. It’s was an honor for us to get to know you and your families.”

• Christy Alexander, a certified sexual assault nurse examiner (SANE) and forensic program coordinator with AMITA Health St. Mary’s Hospital, has been a nurse for 35 years and brought the SANE program to the local area. She is instrumental in forensic nursing, the bridge between the health care and legal systems.

She brought the concept of SANE nursing to the hospital in 2012 and now is implementing similar forensic programs at 14 other AMITA hospitals, where she is helping train others and build their forensic nursing programs. She and her husband, Jim, live in Chebanse and have six children: Craig, Henry, Jake, Eilish, Declan and Cade.

• Sonya Comer has been co-owner of FASTSIGNS of Kankakee with her husband, David, since 2014. She helps businesses solve their sign, graphic and visual communication challenges. Using their marketing and signage knowledge, FASTSIGNS uses custom signs, banners and graphics to help each individual customer increase their business visibility.

Previously, she taught music in her own music studio and at Olivet Nazarene University. She is involved in the Kankakee County Chamber of Commerce, Gathering Point Church and the Kankakee Valley Music Teachers Association. She and her husband live in Bourbonnais and have two daughters, Michaela, 21, and Madison, 19.

• Melanie Devore, owner of Bliss Bridal and Prom in Bourbonnais, has helped countless brides and grooms and their entire wedding party look their best on their biggest day and has assisted high-schoolers to find just the right dress or tuxedo for their special prom night. She and her husband, Casey, have two children, Devyn, 21, and Conner, 13, and live in Limestone. She is involved in the Kankakee County Chamber of Commerce, Women in Networking and the Kankakee Coyotes Hockey Club.

• Nicole Gessner, owner of Rumors Salon and Day Spa in Bradley, graduated from cosmetology school and began working in a salon at the age of 18. In 2004, she opened her own salon. Today, Gessner and the team at Rumors have created a business that provides top-notch customer service and employs professionals that celebrate women.

It’s more than a hair salon, as Rumors Salon and Day Spa offers a line of skin care services and packages, nail service, eyelash extensions, makeup and even spray tans. The business now has 16 women employees who keep up with the newest trends in the forefront of beauty and fashion. Gessner is married to Kankakee County sheriff’s police Lt. Chad Gessner, and they have two daughters, Ella, 14, and Meah, 11. They live in Limestone.

• Kim Piggush, COO of SA Piggush Financial Consultants in Manteno and a two-time cancer survivor, is instrumental in helping the business grow and thrive while also helping bring cancer awareness to younger generations. She and her husband, Scott, took a leap of faith to open the business in 2015. In 2012, Piggush was diagnosed with colon cancer at the age of 28. After two years being cancer free, she again was diagnosed with colon cancer.

After her second diagnosis and after completing chemotherapy, her and her husband’s entrepreneurial spirit continued, and they fulfilled their dream of opening the business in 2015. She began working at SA Piggush Financial Consultants just to “help out,” but it became such as good fit she now serves as COO. The couple has two daughters, Sophia, 8, and Faith, 11 months. They live in Bourbonnais.

• Erika Schultz, Riverside Senior Life Communities marketing coordinator, demonstrates commitment to the community and is a true team player and mentor. Ironically, she began her career at Riverside Senior Life when she and her family were looking for a senior living community for her grandparents. She was impressed with the facility and staff and the feeling was mutual.

In 2012, her husband, Darrin, was involved in a farming accident and spent a month in the hospital undergoing five reconstructive surgeries. Just eight months later, she was diagnosed with thyroid cancer. Today, her husband operates a crop insurance agency and continues to farm, and Schultz is cancer free. She is a Kankakee County Chamber of Commerce Ambassador, active member of Gathering Point Church, volunteers on the United Way allocations panel and is active in her children’s sports and activities. She and her husband live in Limestone and have three children: Landon, 15; Lydia, 12; and Liliana, 9.

Nancy Tholen of Tholens’ Landscape and Garden Center commented, “It was such a nice event overall. People enjoyed the guest speaker, meeting the honorees and visiting with each other. There were a lot of powerful women in the room.”

To read the full story on each Women in Business honoree, go to daily-journal.com/lifestyles/.