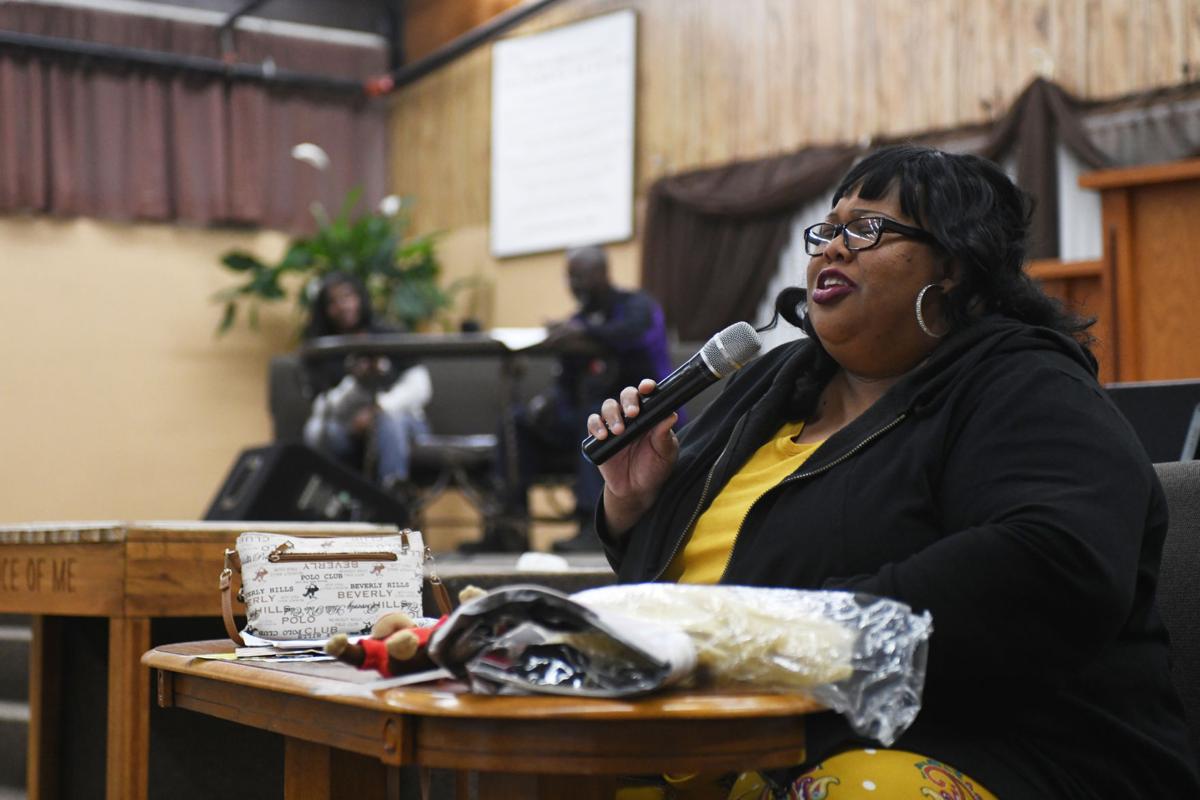 Church member Owaysha Williams, of Kankakee, reads lines from the play “Life is a Stem from Collard Greens,” written and directed by Williams, on a Friday ahead of The Free Christian Center’s second annual play. 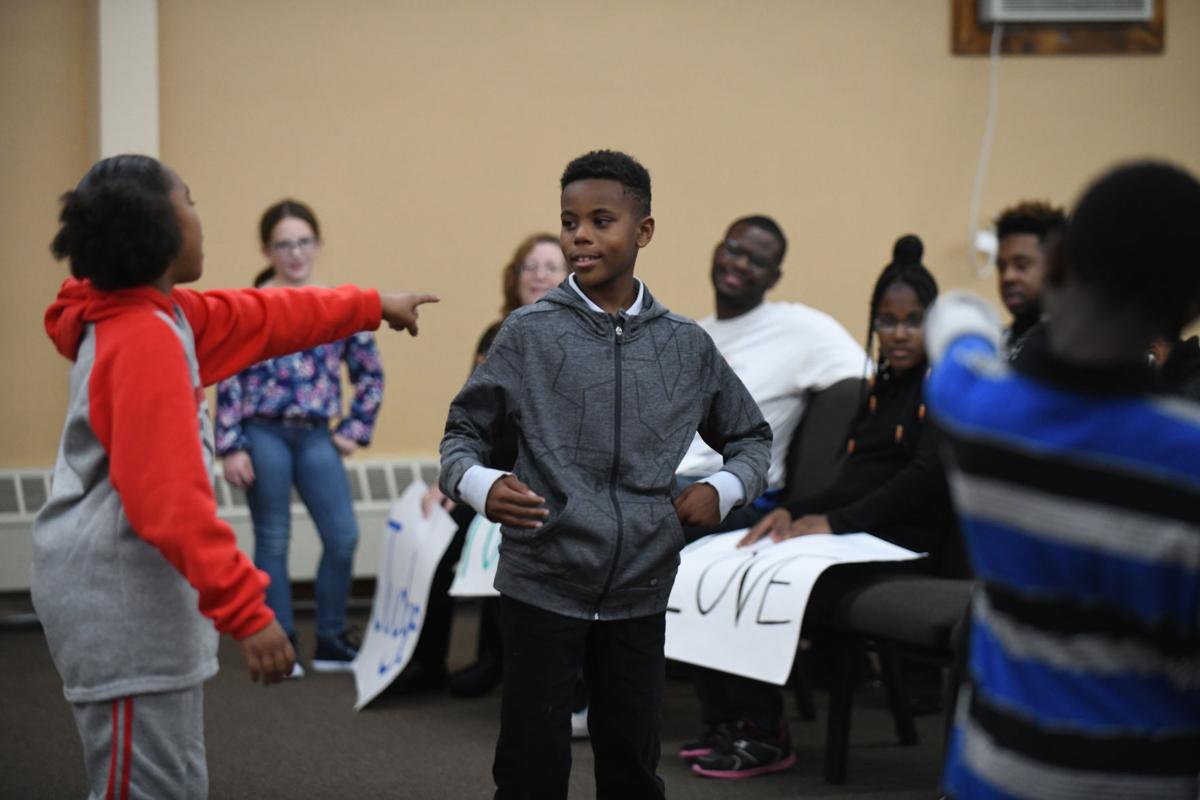 Braden Jordan, 10, center, of Kankakee, rehearses a scene with his peers on a Friday ahead of The Free Christian Center’s second annual play, “Life is a Stem from Collard Greens,” written and directed by church member Owaysha Williams, of Kankakee. 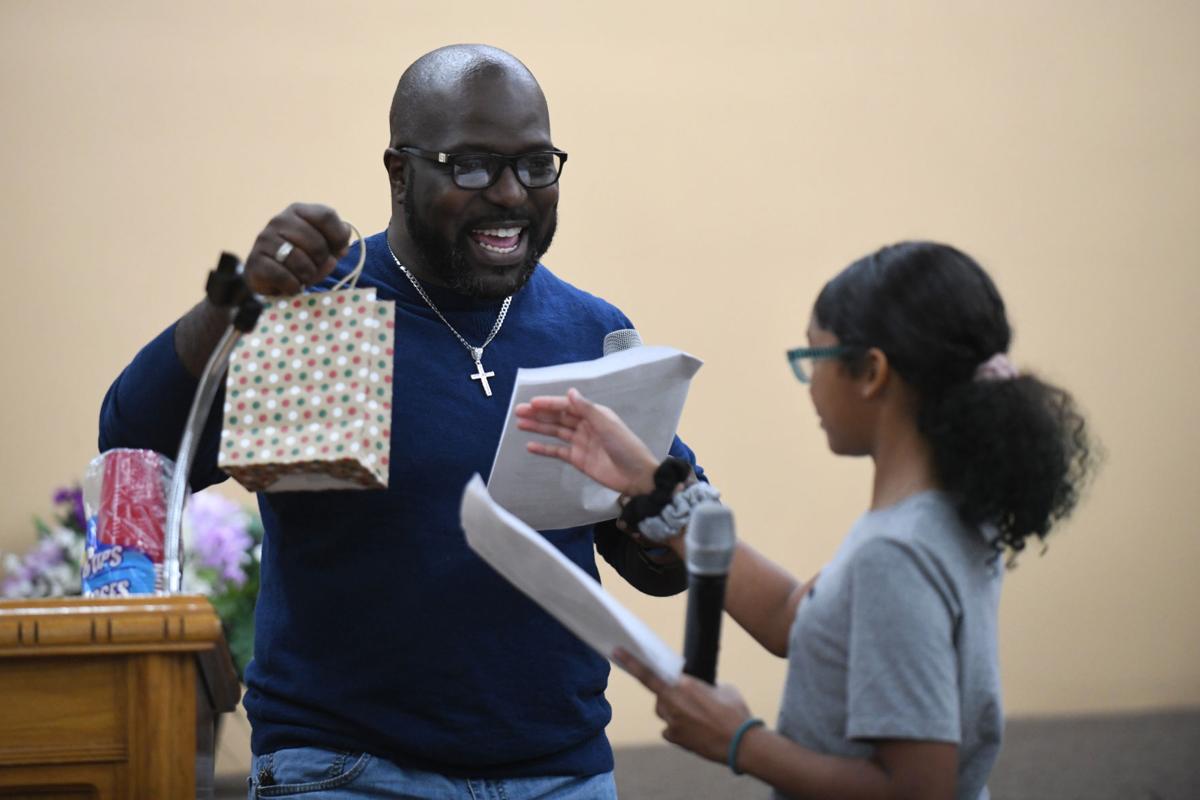 Pastor Christopher Clark Sr., left, rehearses a scene with Raygan Boyd, 11, of Kankakee, on a Friday ahead of The Free Christian Center’s second annual play, “Life is a Stem from Collard Greens,” written and directed by church member Owaysha Williams, of Kankakee. 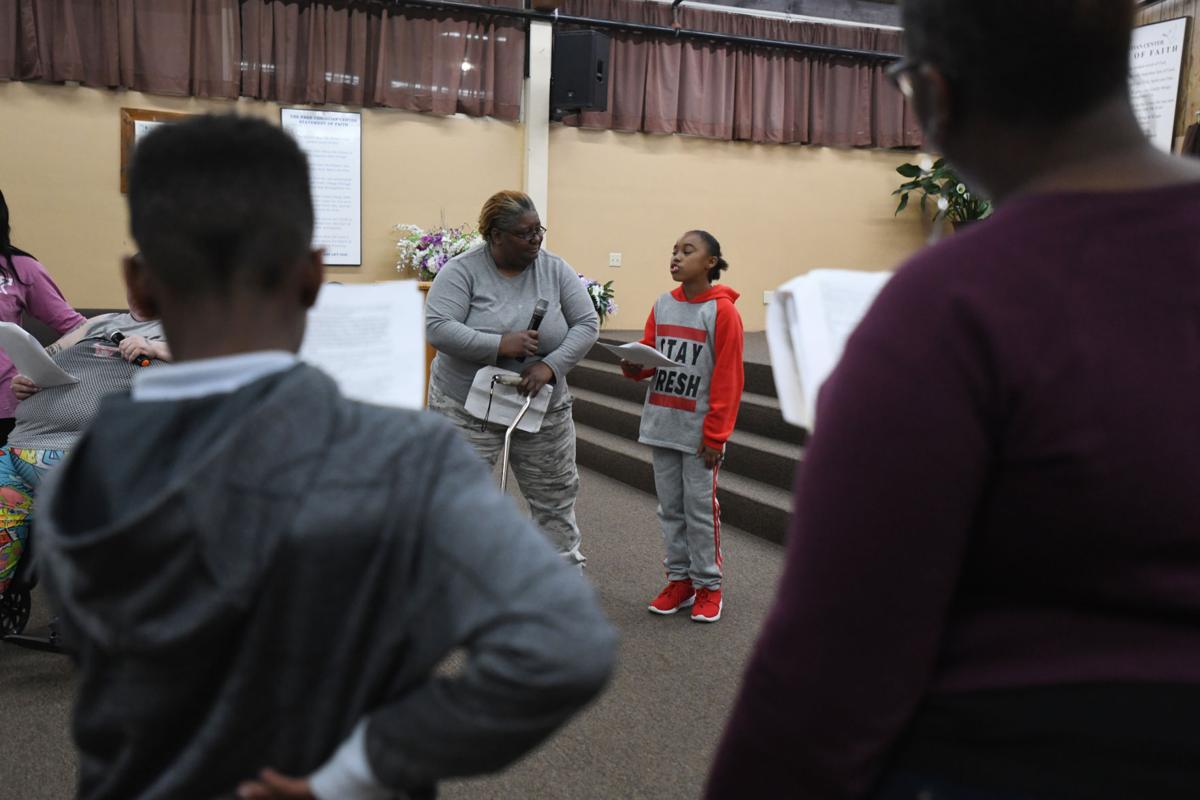 Sunceray Crawford, left center, plays grandmother Wilma to Hayli Martenez, 11, both of Kankakee, on a Friday ahead of The Free Christian Center’s second annual play, “Life is a Stem from Collard Greens,” written and directed by church member Owaysha Williams, of Kankakee.

Church member Owaysha Williams, of Kankakee, reads lines from the play “Life is a Stem from Collard Greens,” written and directed by Williams, on a Friday ahead of The Free Christian Center’s second annual play.

Pastor Christopher Clark Sr., left, rehearses a scene with Raygan Boyd, 11, of Kankakee, on a Friday ahead of The Free Christian Center’s second annual play, “Life is a Stem from Collard Greens,” written and directed by church member Owaysha Williams, of Kankakee.

That’s the meaning behind the name of Kankakee resident Owaysha Williams’ second original play, “Life is a Stem from Collard Greens.”

The play – which is about almost everything in life but includes no direct reference to collard greens – is set to be performed for free to the community on Saturday at The Free Christian Center in Kankakee, the church of which Williams is a member.

Though the play is faith-based and will be performed at the church, Williams urges her audience to know that her second play, just like last year’s “God Was Taking A Nap,” is being performed for the enjoyment of anyone and is not intended for any single religion, race, gender, background, etcetera.

“I didn’t want to just stick to my church,” said Williams, who wrote and directed the production. “I wanted a community play with everyone, whether you go to church or not. I’m not shutting the door on anyone.”

The play, which promotes inclusion and diversity both on and off stage, has a cast and crew of more than 30 local children and adults, including those of varying religious beliefs, races, ages and genders.

Williams will also be reprising her role of the character Miss Lydia from last year’s play, though her role will be smaller this time around.

Part of what Williams enjoys about her work is the fact that no character can be named as a lead or a major role.

The play is divided into several separate storylines, all of which focus on one particular theme, such as bullying, drug addiction and domestic violence.

Though the play does have comedic elements and is sure to entertain, it will also teach its audience immediately relevant lessons.

The play addresses real situations in a fictional environment, which can allow younger audience members to learn about some of the dark parts of life in a safe space.

The scene detailing domestic abuse, for example, was being so well performed during rehearsal by Rochelle Watson, of Kankakee, that her grandchildren actually rushed to the stage in an attempt to “save their Nana.”

“My character and the part Williams wrote for me is so believable that my grandchildren, at first, actually were crying for me, as well as wanting to hurt the guy that was hurting me,” admitted Watson, who portrays a character named Charlene in the production.

“Life is a Stem from Collard Greens” demonstratives the hard aspects of life in a family-friendly environment, which is exactly why Jill Osenga, of Kankakee, and Theresa Mitchell, of Chebanse, wanted to join in on the experience.

The pair saw Williams’ play last year, and though they are not members of TFCC, they enjoyed Williams’ production so much that they wanted to work within the team this year.

Osenga and Mitchell are both cast as sign holders, which will serve as introductions into each of the play’s individual scenes.

“It’s Christian-based, and we don’t get much of that around here,” Osenga said. “You can take the whole family because there’s nothing dirty in it. At the same time, it shows a lot of emotion and provides real-life lessons.”

“A lot of the different scenes hit home,” agreed Suncerary Crawford, of Kankakee, who is portraying the character Miss Wilma in the play. “They’re so realistic; they’re things that are happening in people’s everyday lives.”

Crawford, who enjoys acting, also said that despite the play’s sometimes somber subjects, rehearsals have been a great experience for all involved. The group, including some individuals who never met prior to the rehearsal dates, state that they’re now like a big family.

“We’ve been really good about working together, fixing what needs to be fixed, blending where it needs to blend,” Crawford said. “We put a lot of time and care into each character and each part, making sure the message of the play comes across.

“We’re a big family. Even for those who’ve never seen each other before, we’ve become family.”

The makeshift family consists of both seasoned actors and newcomers.

In Williams’ audition flyer, she specifically stated that no acting experience was necessary for any part, simply because she wanted the play to be all-inclusive and not leave out any willing prospective actors.

Then entered Wanda Clincy, of Kankakee, an acting enthusiast who was in plays “a lot of years ago in Mississippi,” and is just now making her area debut because she believes in the play’s underlying message.

Clincy agrees that the play is meant to be enjoyed, but there’s also much to learn.

Clincy’s character is a young woman named Felicia dealing with homosexuality and is estranged from her family. Clincy believes that her character’s purpose is to help the audience learn to “love people and accept them for who they are,” no matter if you agree with their choices or not.

“You can only love a person where they are,” Clincy said.

And the play is already doing just that, boasting a tight-knit, family-like atmosphere among its cast and crew members.

Though some of the cast has never met one another, three of its members are actual family.

Watson’s daughter, Brianna Trotter, of Kankakee, and her grandson, Braden Jordan, 10, are also performing in the play alongside Watson.

The family affair is a special one. Watson said she feels grateful that Jordan, who has Crohn’s disease, doesn’t let his diagnosis slow him down or stop him from fully enjoying life. Despite his hardships, Jordan is energetic, active and a perfect gentleman, Watson said of her grandson.

Jordan’s predicament exactly mirrors Williams’ production: Life is, in fact, a stem from collard greens, as audiences will learn on Saturday when the cast and crew perform the show for free at TFCC at 111 E. Oak St., Kankakee.

Donations made out to the church (not to Williams or any other one person) will be accepted, but Williams and her cast members just request that the public come as they are.

“You can be yourself,” Watson said. “You can come as you are and be accepted and welcomed.”

The night will also feature guest host DJ Miles Franklin from The King’s Highway Morning Show on 102.3, a gospel station of which Williams is a fan, who will be performing a set during the play’s intermission.

For anyone who cannot attend the event on Saturday, but could still like to view the play, Williams will livestream the night on TFCC’s Facebook page.

The event is completely free to all members of the public because Williams believes “the most fun you can have is broke fun.”

WHAT: “Life is a Stem from Collard Greens,” written and directed by Owaysha Williams

Donations directed to TFCC will be accepted in person or by mail.

For anyone who cannot attend the event on Saturday, but could still like to view the play, Williams will livestream the night on TFCC’s Facebook page.