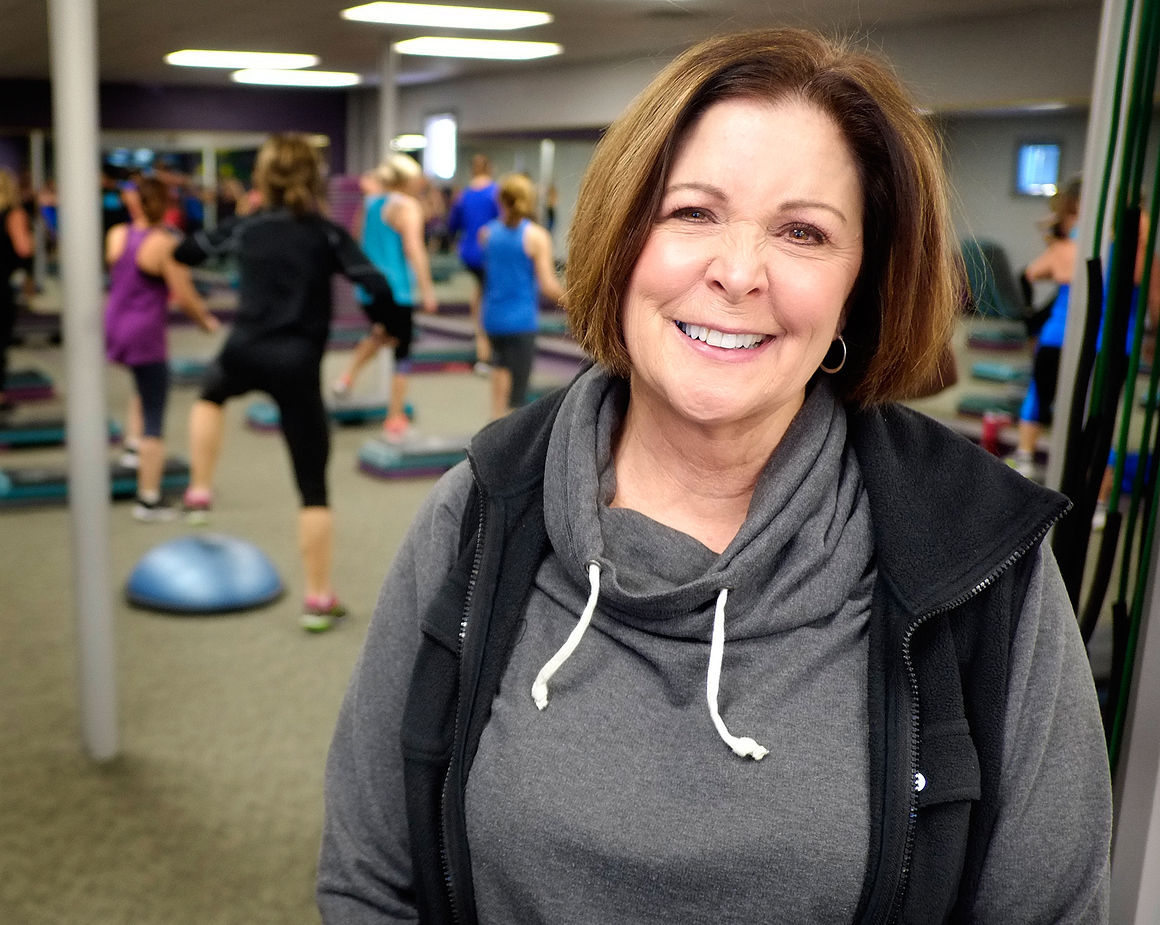 After three decades owning Body Works in Bradley, one of the area's first womens-only fitness centers, Cindi Whittington is retiring. She sold the gym to Kent and Leesa Frye, who will reopen it as Le Body Shop. 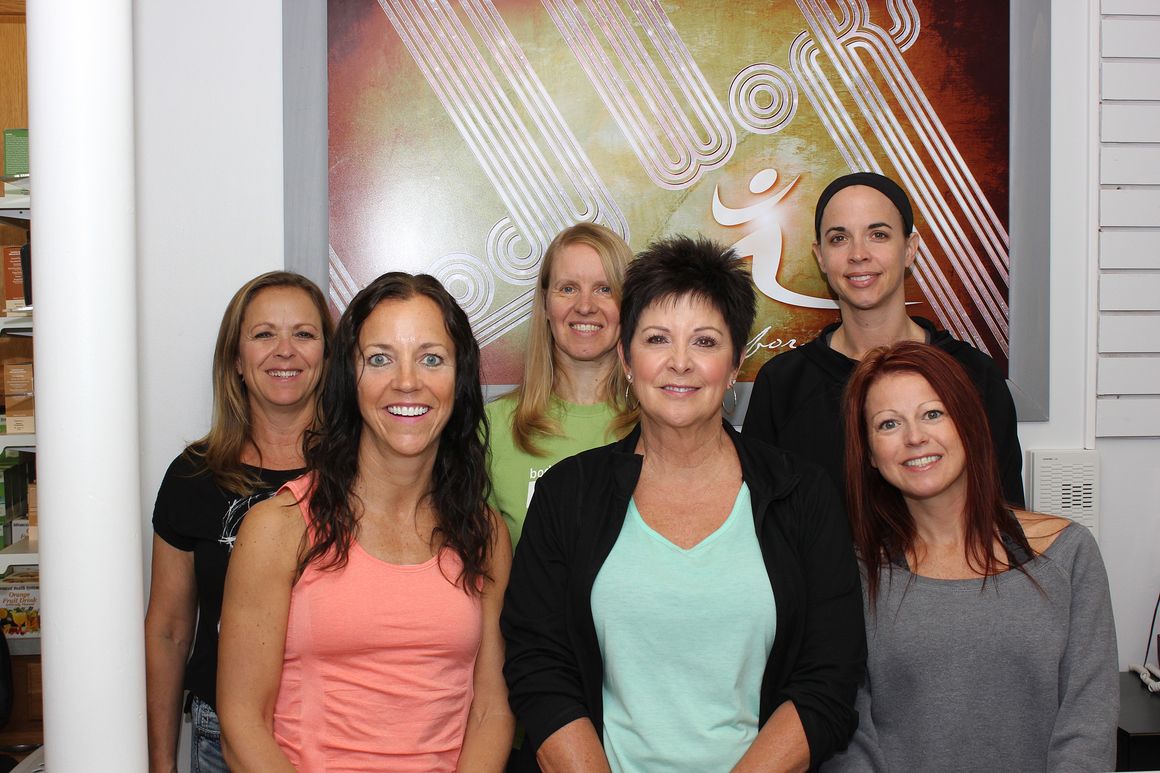 Cindi Whittington, front row center, poses with some of her fitness instructors who have taught throughout the years: back row, from left: Laurie Hovell, Rhonda Davis, and Stacy Spalding. Front row, Tania Lagesse, left, and Brandi Mullady. Whittington is closing Body Works Fitness Center, Inc. after more than 30 years as the area's premier womens-only gym.

After three decades owning Body Works in Bradley, one of the area's first womens-only fitness centers, Cindi Whittington is retiring. She sold the gym to Kent and Leesa Frye, who will reopen it as Le Body Shop.

Cindi Whittington, front row center, poses with some of her fitness instructors who have taught throughout the years: back row, from left: Laurie Hovell, Rhonda Davis, and Stacy Spalding. Front row, Tania Lagesse, left, and Brandi Mullady. Whittington is closing Body Works Fitness Center, Inc. after more than 30 years as the area's premier womens-only gym.

It was a stinging cold day, but Cindi Whittington was up at 5:30 a.m. shoveling snow at Body Works Fitness Center Inc. and getting ready for the early risers, many who have been members for decades.

It's been her routine for years, but after 32 as owner of the womens-only gym, she finally is stepping down and retiring. The womens-only fitness center that has been a focal point on Broadway Street in Bradley for 30 years is closing.

On Monday, Kent Freye, a urologist, and his wife, Leesa, will open Le Body Shop in its place. The new gym will continue to mostly be women-only, although two boot-camp style classes per week will be co-ed.

Whittington, who began working in fitness at 28, opened the gym at 31. She's a lifelong area resident and lives in Bourbonnais. At 63 now, Body Works is a place that's defined a huge part of her life in many ways. She often could be found at the front desk, leading a class or listening to members' stories about their families, the vacations they were planning or even just how their day was going — working long days from 4:30 a.m. to 10 p.m.

"I wanted a place where women would feel comfortable at all times," Whittington said. "There are so many women who are so self conscious." And with that, many of the hundreds of women who called the gym a "sanctuary" are looking back on the place they found family, camaraderie and friendship. "I'm here every morning, and I rarely miss," said Annette Zimbelman, of Manteno, who has been a member since Whittington open the doors 32 years ago. "It's been a family, and I love to work out here."

"I went through cancer five or six years ago, and this place was normal when nothing else was," said Diane Barber, who joined the gym in 1995. "When your life is work, home and the gym, the gym must be pretty special."

Whittington's daughters, Stephanie Whittington and Stacy Spaulding, lived their entire lives at the gym, from being in the nursery when Cindi taught classes, to working out in their teens, to eventually becoming teachers and fitness trainers in adulthood. Her grandkids were born and raised here, too, she said.

Her touch is easy to see, from showing members the proper way to do a circuit route to remembering names, dates and genuinely asking how people are doing. She greets everyone who walks in with a cheery hello and smile. That thoughtfulness kept "my ladies," as she calls her members, coming back through the years.

"[She's] someone who calls you by your name, asks you how you're doing whatever crisis is going on," said Lori-Ann Truer, of Herscher, who has been a member for 27 years. "It's therapeutic to talk it out and then go work it out."

Whittington opened Body Works after encountering a unique problem: Exercising as a young woman, she fell in love with cardio and weight lifting, but "the places I went to, the particular place I was at, didn't believe in weights for women and didn't believe in cardio."

Whittington worked to master every kind of certification in personal training, health and nutrition available. "ACE (American Council on Exercise), AFAA (Aerobics and Fitness Association of America), aerobics ... I got a ton of them," she said.

She started in a small building down the road, but quickly outgrew it. She bought out the area's first womens-only gym, Woman's World Fitness Center in Kankakee, in 1994.

During the years, Whittington and her daughters choreographed all the routines for their aerobic classes themselves, and changed them every three months. They ran as many as five different classes a day. She continued to teach classes until six months ago.

And while Whittington and her husband, Rick, have been considering selling for about a year, it wasn't a decision she took lightly.

"I worried what was going to happen with my ladies, because I wanted to make sure they had a place," she said with obvious emotion, "because no one really understands the camaraderie that's here.

"Like in that class alone," she added, referring to the 9 a.m. aerobic class booming music as we talked. "There are girls who have been married, have several kids. Their kids come here, their grandkids come here. Thirty-two years. ... The base clientele is an amazing factor in itself, how they've stuck with me, because there no place where they can get classes like this."

Le Body Shop's focus will be on high-intensity classes in a supportive, fun environment. Classes include group weight lifting with a personal trainer, circuit training, plyometrics, yoga, spin and Pilates. The Freyes plans to employ eight, including manager Lesley Hertz, who will also be the resident nutritionist. Find out more about the gym on Facebook.

As that 9 a.m. class ended and women filed out, collecting their coats and shoes or heading back to the weight room, Whittington began passing out charts many of the members had filled out 15 or 20 years ago — old paperwok Whittington has been sorting through in preparation of the change. "I'm the same weight, but I grew 2 inches," one woman said.

An old scrapbook was laid out on the reception desk, and as memories started flowing, so did the tears. As another woman said: "I feel like Meg Ryan in 'She's Got Mail,' when her bookstore closes."