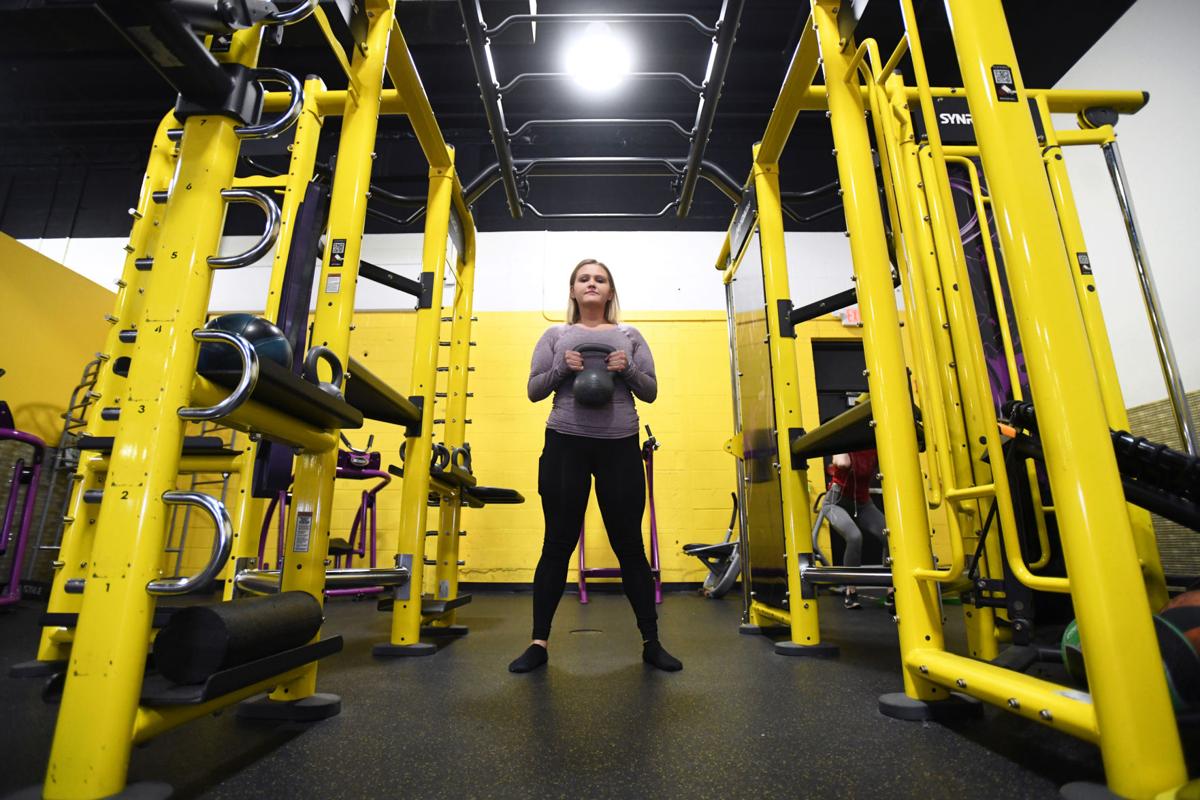 Kelsey Stauffer, of Ashkum, works out Tuesday at Planet Fitness in Kankakee, a routine part of her now-healthy lifestyle. Stauffer, 22, has lost 100 pounds during the past two years, which prompted an excess skin-removal surgery in November and an overall change in her habits and mindset. 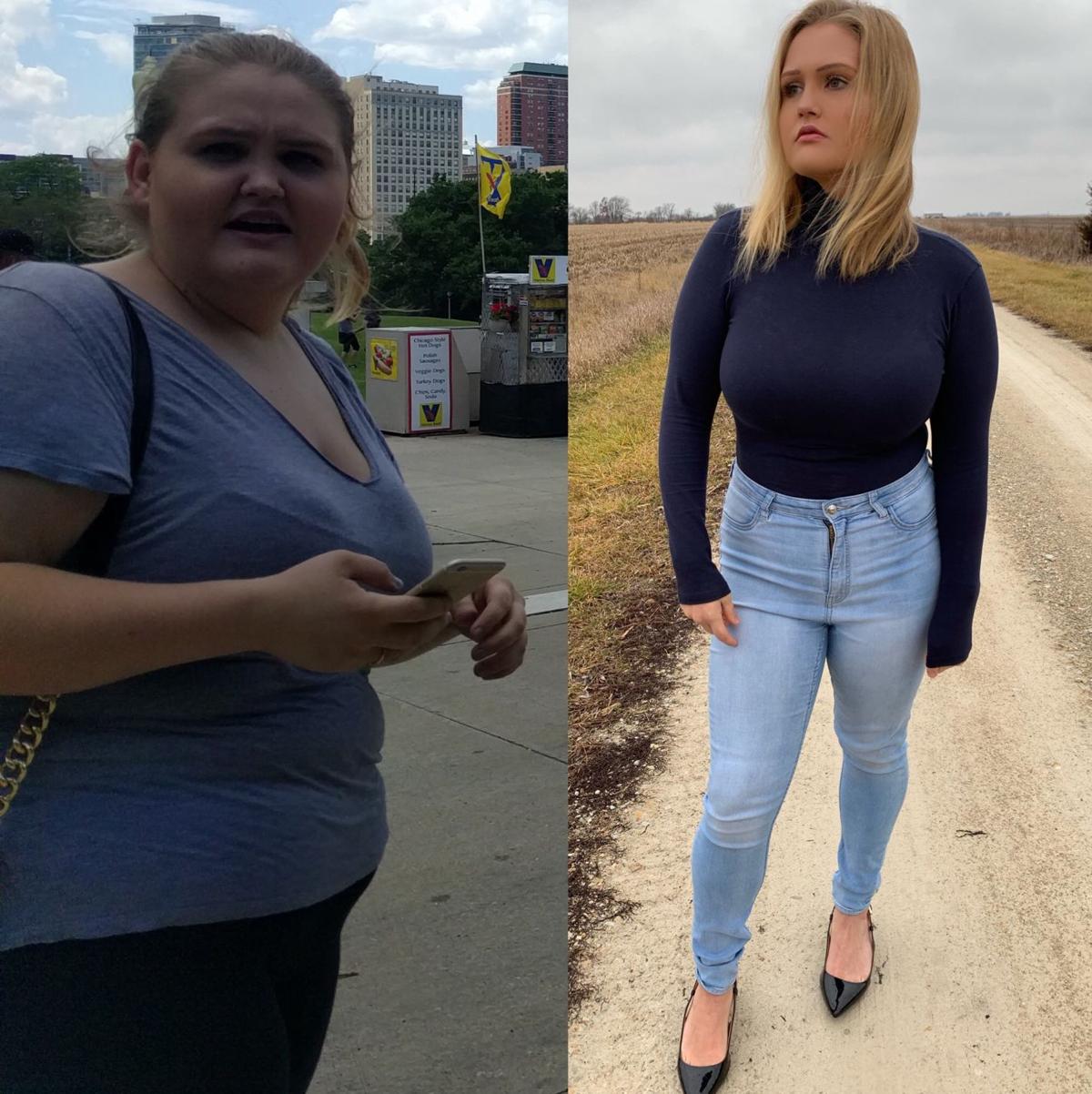 At her heaviest weight, Kelsey Stauffer weighed 250 pounds. She never felt connected to her physical self.

“In my daydreams I would make myself out to be strong and outgoing,” she said. “We all have an alter ego in our heads about who we want to be, right? Well I got tired of imagining and did my best to make it reality.”

“I lost the weight in less than two years,” she said. “Did societal standards of beauty play a role? 100 percent.”

Her earliest memory of being picked on for her size was when she was in the second grade.

“For most of my life all I wanted was to look normal,” Stauffer said. “When I first started working out that was what motivated me — being good enough for others. It’s hard to admit, but I’m only human.”

Now, at 147 pounds, Stauffer tries not to pay too much attention to the number on the scale.

“I judge my progress on how I feel and look,” she said. “It’s easy to obsess over your number, and I don’t want to have an unhealthy relationship with fitness.”

After realizing how much she truly enjoyed fitness and the empowerment that it brought her, she made a change.

She plans on becoming a personal trainer in the future.

“I want to use my experience to help others,” she said. “I can’t think of anything more rewarding.”

Stauffer joined Planet Fitness in Kankakee in April of 2016, but didn’t fully commit to the gym until January of 2017. She cleaned up her diet and made herself get into the routine of working out at least four days a week.

Currently, she works out five to six days a week starting with a 10-minute warm-up on the treadmill, then going into cardio and weightlifting, allowing herself one day of rest. Although she now eats healthier, she does allow herself to have cheat meals.

“I’m not a robot,” Stauffer said. “I love pizza and I’ll have some every once in a while.”

When she started working out, Stauffer worked 12 hour days as a nanny for two different families, and would frequently have to wake up at 4 a.m. to get a workout in for the day. Currently, she only works as a nanny for one family.

“I’m not nearly as stressed out,” Stauffer said. “I get in the gym after work everyday and I don’t feel completely drained.”

After a while, results started to show.

“People in my life would say, “You’re melting!” It’s strange because while it did happen rather quickly, anything before the weight loss feels like another lifetime for me,” Stauffer said. “I changed my entire lifestyle and I couldn’t imagine going back to who I used to be.”

After cutting out all unrealistic ideas on how to lose weight, Stauffer stuck to two things — eating right and exercising.

“No gimmicks, tricks, or expensive diet plans,” she said. “Instead of eating ice cream, I would have Greek yogurt or instead of French fries I would eat carrots.”

For her exercise, she stuck to high-intensity cardio in the beginning.

“I know cardio gets a bad rep, but I love it,” Stauffer said. “Cardio really allows me to get out of my head and just move my body. It’s freeing.”

Once she began to notice shrinkage of her body, she started lifting weights.

“For me, I wanted to focus on losing the fat and then I tackled building muscle,” she said. “I also created an Instagram (@kelseykillingit), dedicated to my journey to help hold myself accountable.”

Going under the knife

Stauffer turned to surgery after realizing that when you lose a significant amount of weight, you’ll be left with loose skin.

“The mental struggle that comes with weight loss is tough,” she said. “I had worked so hard to get to where I am now but was reminded every day of my former self by the skin still attached to my body. It was exhausting having to hide it.”

In order to hide the loose skin, she would wear compression garments.

“It would constantly be on my mind. I was always worried if my skin was on display or if I looked oddly shaped to any passerby that I encountered. The skin was like a prison for me and I couldn’t feel free until it was gone.”

Stauffer did her research on plastic surgery that resulted in finding a doctor, Dr. Paige C. Holt, in Bloomington and scheduled a consultation with her.

After meeting with her and discussing what all would happen in the operating room and going over financial costs, she was overwhelmed.

“I had to decide whether I’d get a standard tummy tuck or a fleur-de-lis (extended tummy tuck). I also had to come up with $8,700 before I could have it,” Stauffer said.

“I needed the extended tummy tuck due to having more excess skin in my upper abdomen, but I was apprehensive of the extra scarring. I felt I was trading in one insecurity for another,” she said. “I wanted to be able to show off my body and felt the scarring might hold me back. I realized the scarring would only hold me back if I chose to let it.”

Kelsey went forward with her extended tummy tuck on Nov. 27, 2018, just five months after her first meeting with Holt.

For Kelsey, recovering from surgery wasn’t a bed of roses. It was a mental battle. The first 24 hours were hell.

“I couldn’t stand up without feeling light headed or wanting to throw up because of all the medications I had pumping through me,” Stauffer said. “I slept the first few days away but after that, it was simply a mental battle of keeping myself from going insane.”

Kelsey also had two drains for the fluid connected to her incisions.

“That was gross,” Stauffer said.

During recovery, Kelsey was limited to what she could and couldn’t do.

“I went from working out six days a week, to not leaving my house for three weeks,” Stauffer said. “My doctor told me I wouldn’t feel like doing anything for a month but I guess I was a special patient. I was ready to hop on a treadmill after a week.”

Throughout her weight-loss journey, the only thing that Kelsey wishes she could do differently is start making a change sooner.

“We all have the ability to do great things and I let fear of failure keep me from doing them for most of my life,” Stauffer said.

“I was terrified when I first joined the gym, but I knew it was something I had to do for myself. For a while I didn’t feel like I belonged at the gym — I would think, “I probably look ridiculous to all these fit people.’ And maybe I did or maybe they didn’t care,” she said. “I made myself keep showing up regardless. Getting out of your comfort zone is crucial if you want to live your best life.”

Now, Kelsey feels like a better version of herself.

“I’m a much more confident person,” Stauffer said. “I’ll talk to people more openly and actually put myself out there. I’m still learning to love myself for who I am but it’s definitely gotten easier. My good days outweigh the bad. I have to remind myself how far I’ve come and how great I’m actually doing.

“I’m still a work in progress, but I’m much stronger than I once was — physically and mentally. I want to be the healthiest and happiest version of myself. I deserve it, and so does everyone else.”