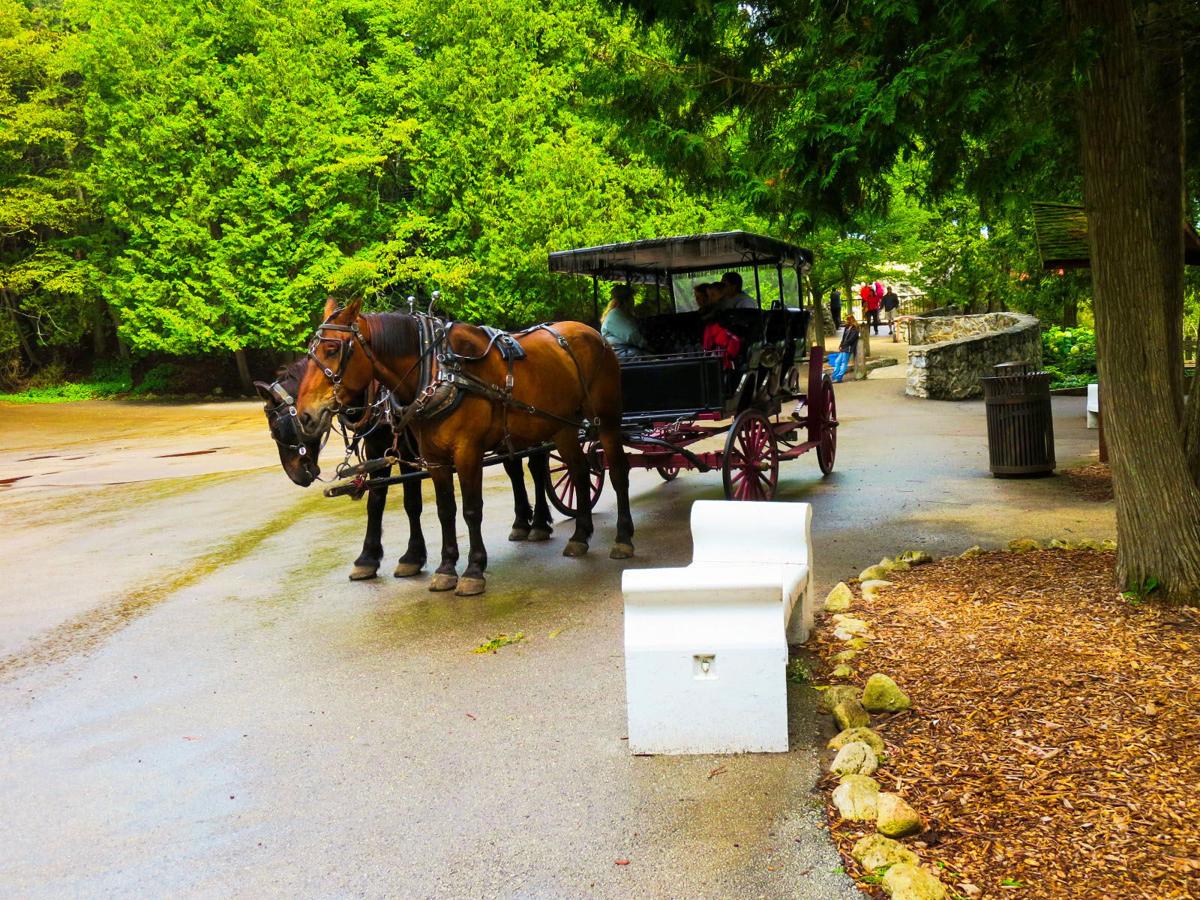 Carriages pulled by two Clydesdales serve as taxis on the island as an ordinance banning automobiles was passed in 1898 and stands today. 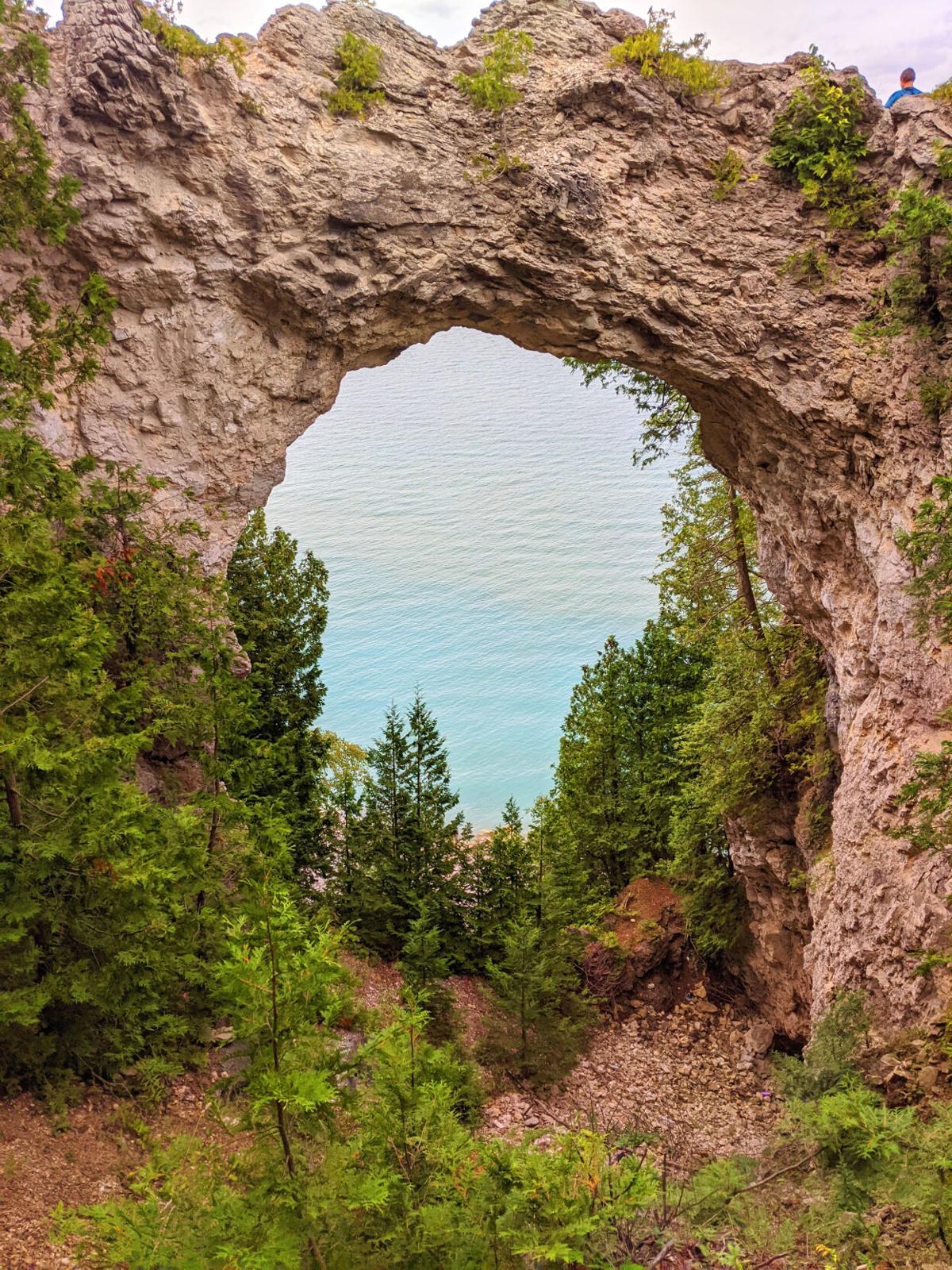 Arch Rock, one of Mackinac Island's most recognized and popular landmarks, stands 146 feet above the shoreline. 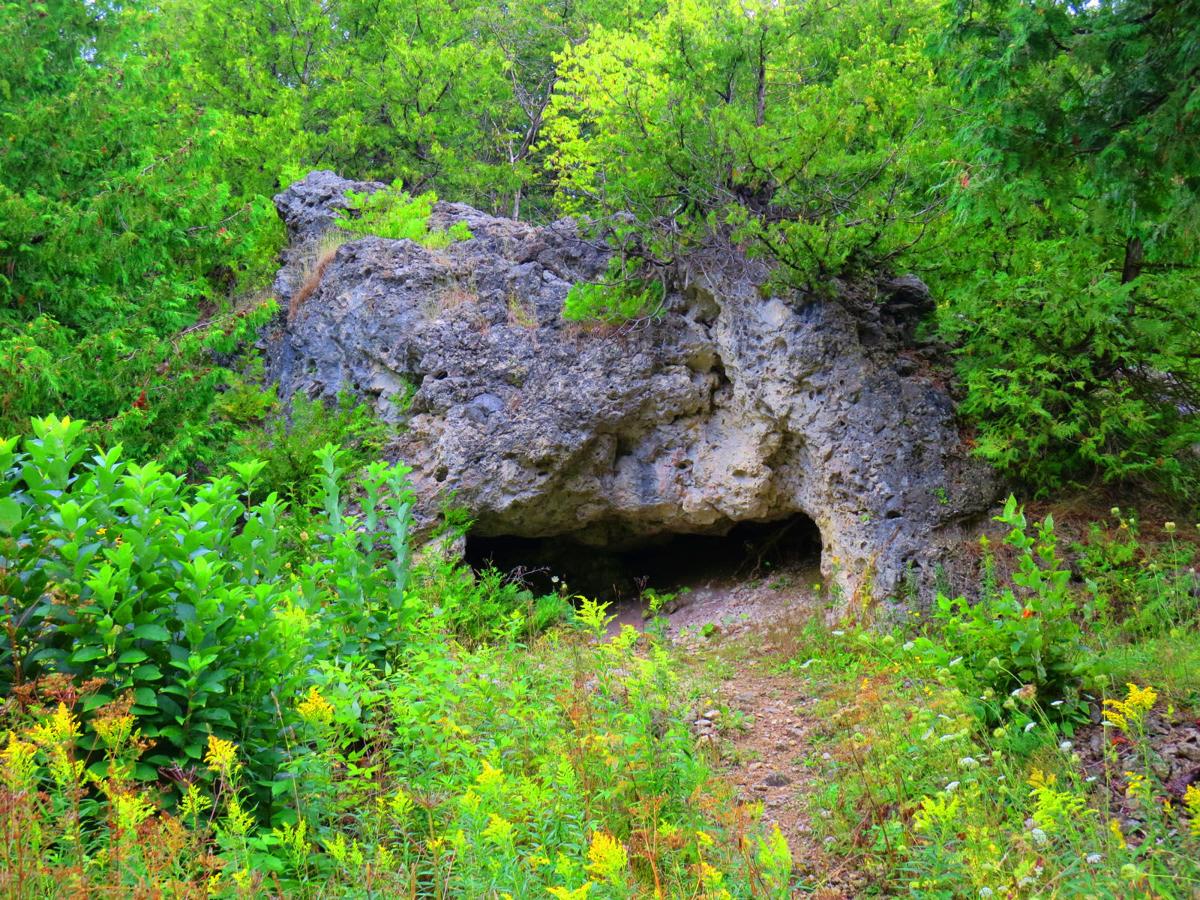 The Skull Cave was once used by Native Americans for burials. 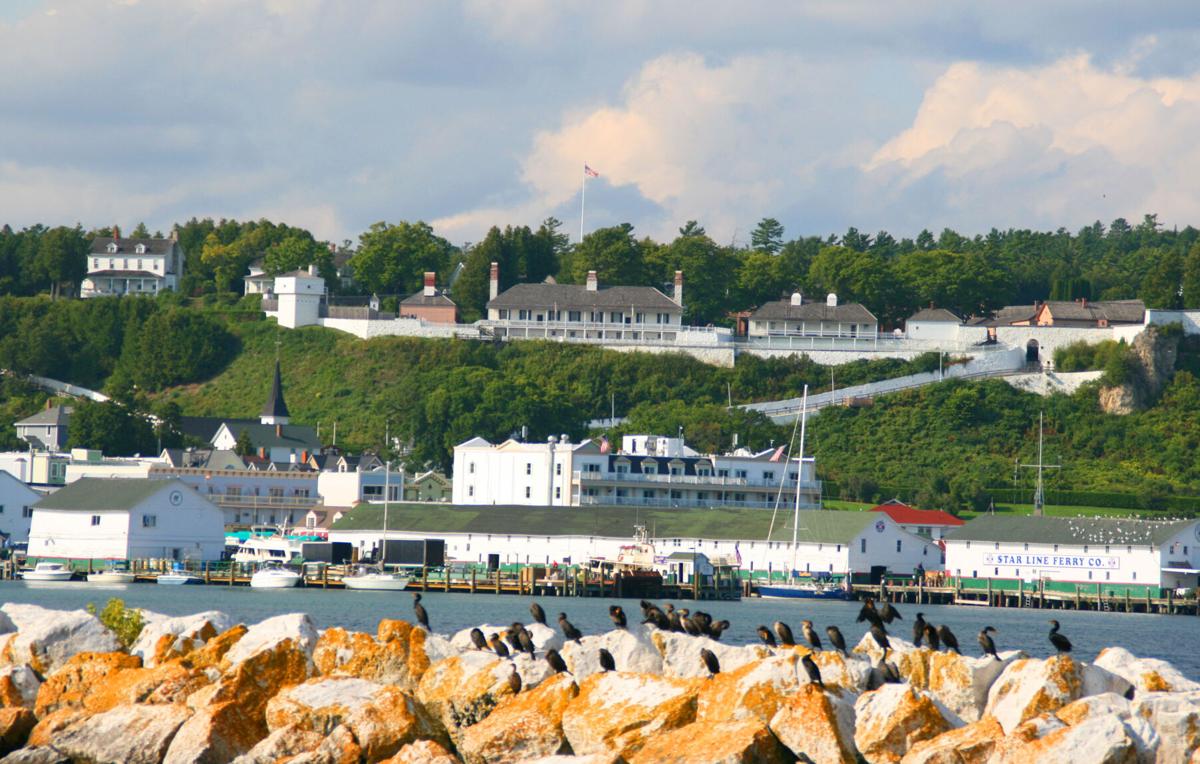 Stepping onto the island is like stepping into the 19th century. 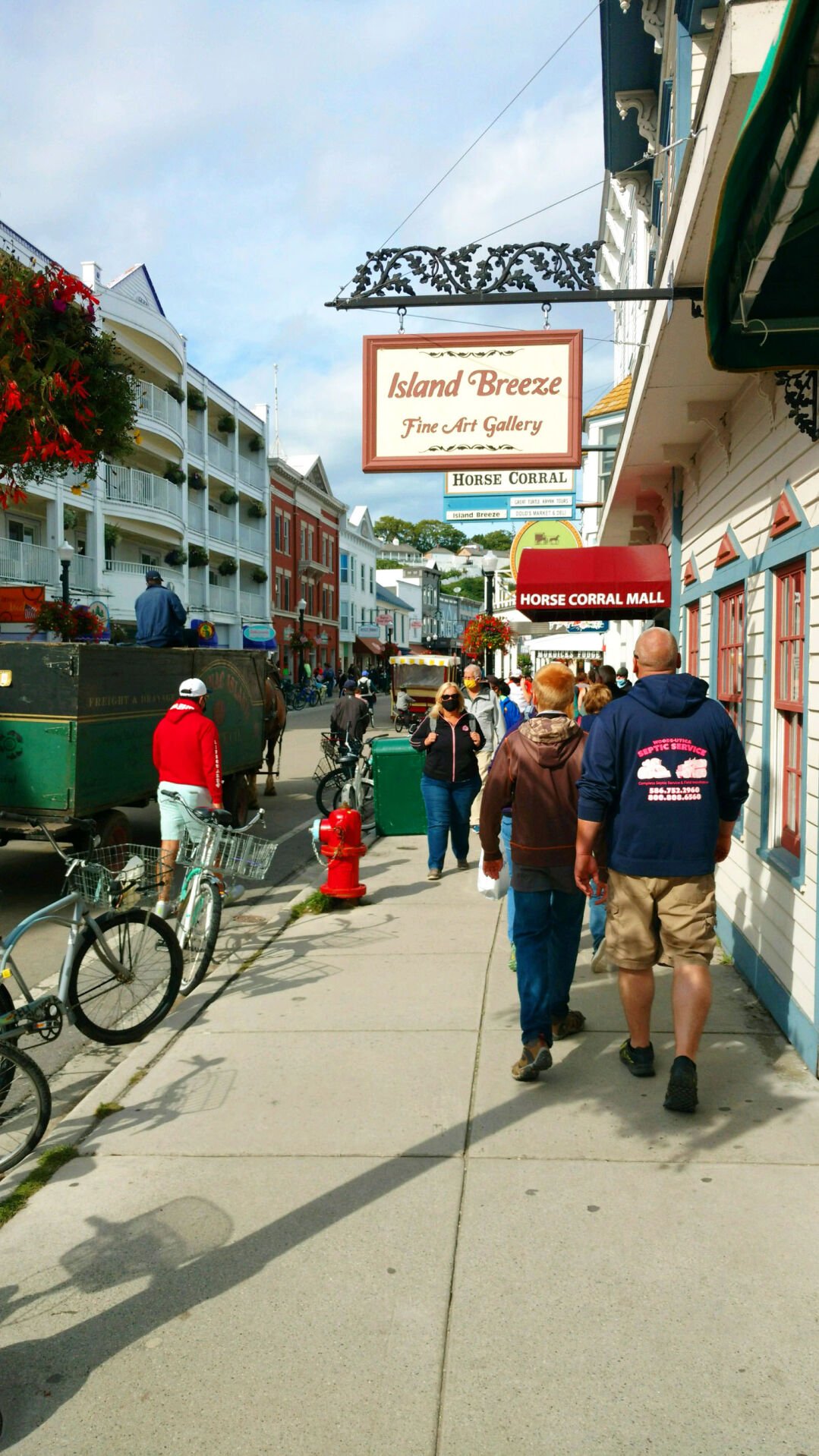 A stroll of Main Street is practically mandatory for visitors. 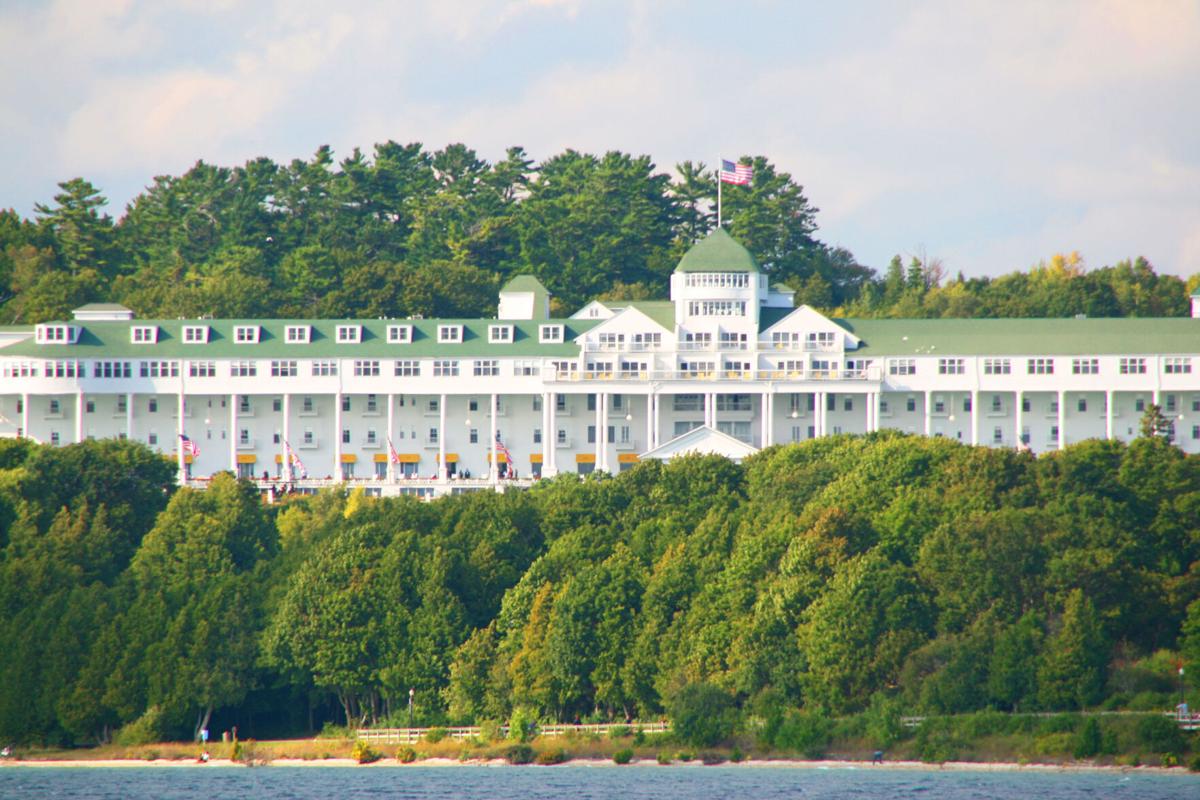 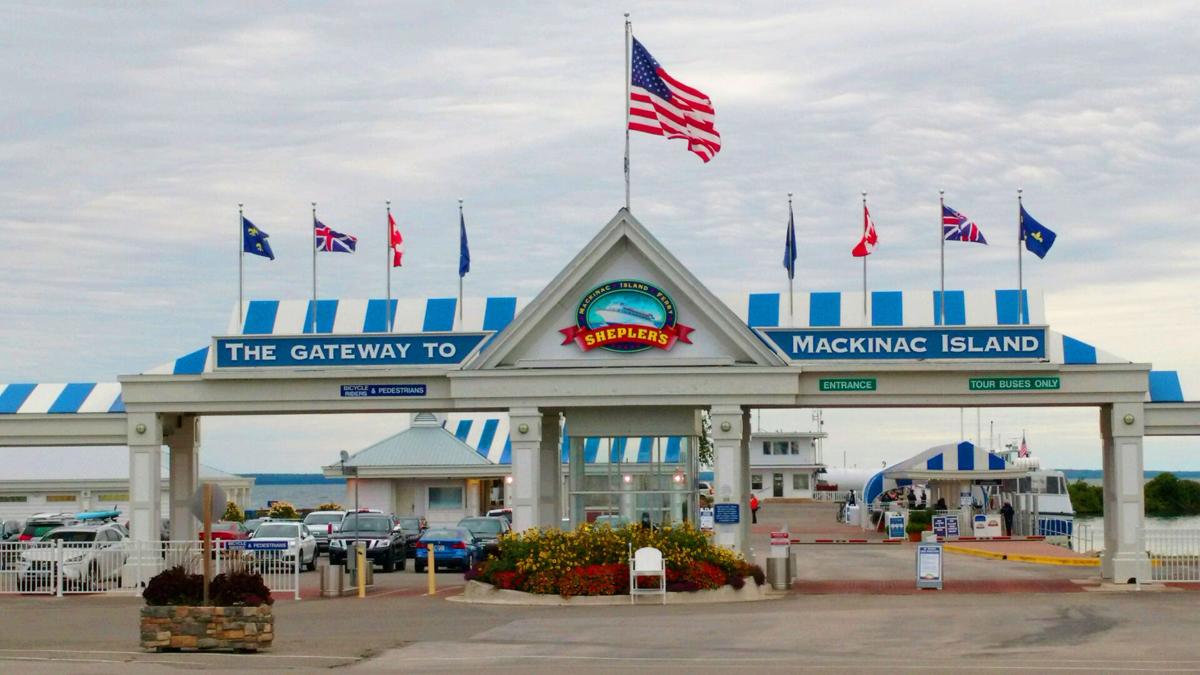 The Gateway to Mackinac Island.

Carriages pulled by two Clydesdales serve as taxis on the island as an ordinance banning automobiles was passed in 1898 and stands today.

Arch Rock, one of Mackinac Island's most recognized and popular landmarks, stands 146 feet above the shoreline.

The Skull Cave was once used by Native Americans for burials.

Stepping onto the island is like stepping into the 19th century.

A stroll of Main Street is practically mandatory for visitors.

The Gateway to Mackinac Island.

The first time I referred to the iconic island as Mack-i-NAC, I was roundly corrected by the young lady who was wrapping up my peanut butter fudge.

That was many summers ago. It was a linguistic lesson that has served me well.

Be forewarned, pronounce it Mack-i-nac, and you will give yourself away as a tourist who doesn’t know how to pronounce the place you’re visiting, and the residents take it to heart.

Whether it is spelled Mackinaw, as in Mackinaw City, or Mackinac, as in Mackinac Island, it is pronounced the same way: Mack-i-naw. A mish-mash of Native American, French and British heritage resulted in an eclectic spelling and pronunciation.

Having to revise travel plans on the fly because of the current coronavirus pandemic, we chose to explore the less-populated expanses of upper Michigan. Our first stop was Mackinac Island, which long has been a summertime destination for Midwesterners. In hopes of avoiding the crowds of summer’s last weekend, we chose to head north after Labor Day. Based on the bumper-to-bumper traffic southbound on I-75, it seemed a wise choice.

The 3.8-square-mile island has been a destination for centuries. Long before European explorers discovered its lush forests, bountiful waters and idyllic summer weather, Native Americans had journeyed to Michilimackinac, or “The Great Turtle,” as they referred to it. It was once a fur-trading post, eventually housed a fort for disparate nations before becoming a vacation spot in the late 1800s for the titans of industry.

Being an island, our visit began at Shepler’s Ferry, where we boarded one of their high-speed boats for a wind-whipped, 15-minute ride that sent a few of the top-side passengers scrambling for the warmer confines of the interior lower deck. Approaching the island, which straddles the confluence of lakes Huron and Michigan, it is difficult to ignore the stately, imposing countenance of the century-plus-old Grand Hotel and its 660-feet-long front porch. The majestic, white portico beckons guests with old-world hospitality and charm and portends a unique, and a bit of a throwback, experience.

Stepping onto the island is similar to stepping into the 19th century. Grand Victorian architecture that has been preserved and frozen in time can be seen everywhere. In addition, there are no cars on Mackinac; the island residents passed an ordinance banning automobiles in 1898 after the first “horseless carriage” spooked all of the horses and a few of the townsfolk. Here, a taxi literally is powered by horse, or more explicitly, it’s a carriage pulled by two Clydesdales. The alternative modes of conveyance are bicycling or walking. But getting around on foot, by bike or by horse here is all part of the fun of exploring the island of which 80 percent is state park.

As with everywhere now, the new normal had dictated practices to combat the spread of COVID-19 had been put in place as we were reminded by numerous and humorous equine-based posters dispersed about town.

Lunch beckoned us, so we headed to the famous, and sometimes infamous, Pink Pony. Located in the Chippewa Hotel, its tables look onto the water and, in fact, its patio hangs over it. Whitefish and crispy, crunchy, flavorful onion rings were enjoyed with a dose of sunshine and fresh air.

After that, we eschewed the throngs of Main Street and headed east toward Lake Shore Road. Feeling the need to hike, we passed by two historic churches. Ste. Anne’s Catholic Church, whose current building dates to 1878, has a museum with original stained-glass windows, paintings and records dating back to 1695. Two blocks farther stands the subdued presence of the Protestant Mission Church, the oldest surviving church building in all of Michigan.

Stepping past the Mission Point Resort, we came upon the Spring Trail and ascended its 206 steps to the top of a bluff, where we found ourselves under the cool canopy of a rich, green forest and overlooking the cherished Arch Rock. Framing a stunning water view of Lake Huron, Arch Rock, one of Mackinac Island’s most recognized and popular landmarks, stands 146 feet above the shoreline.

There are more than 70 miles of hiking trails running through the state park, so it’s just a matter of picking a trail and going. Hiking deeper into woods, we came upon Sugar Loaf, a 75-foot-high cylindrical rock formation that towers above the forest floor.

As we continued on, we noticed the silence around us — or, to be more precise, the lack of sounds of civilization. We hadn’t come upon another individual in more than 20 minutes. The hums of nature became more pronounced, and its “quietness” embraced us.

Another set of steps took us up to Fort Holmes, a small, fortified redoubt and blockhouse located on the highest point of Mackinac Island. The reconstructed fort provides excellent views of the Straits of Mackinac and the town below.

Nearby, we found Skull Cave. A small, shallow cave, it was used by Native Americans for burial and, on at least one occasion, the hideout of a fur trader during the Indian wars.

After hiking for several miles, we barely had touched the numerous trails and pathways intertwining the island, but we found it was time to head back down to heart of the island.

Emerging from the woods, we passed Fort Mackinac. The expansive limestone and palisade fort, built in the late 1700s, dominates the bluffs of the island. Originally constructed by the British, it was occupied by the Americans after the Revolutionary War and was the sight of two battles during the War of 1812. Today, visitors are greeted by costumed interpreters who describe life in the 1880s.

Located at the foot of Fort Mackinac, Marquette Park hosted appropriately distanced patrons as a talented duo entertained them with a rendition of Sweet Caroline.

Returning to Main Street, we stopped for refreshments at Mustang Lounge. The rustic interior and its laid-back ambiance was pleasant as we indulged in a couple of well-earned cold libations.

Afterward, strolling Main Street was mandatory before catching the final boat off the island. There is the usual T-shirt and trinket shops; however, there are some charming boutiques and artisanal jewelry shops also.

And, of course, there is no way to avoid one of the many fudge shops. As the decadent smells waft onto the street, confectioners pour out huge tubs of molten fudge onto marble slabs, working it into the most celebrated souvenir of the island.

We bid the island goodbye with a smile as our water-taxi chased the setting sun. We had visited Mackinac Island many times in the past, but this time, we explored its natural side and were charmed by its beauty.

Frank Hosek is a Bourbonnais resident and often shares his traveling adventures with Daily Journal readers.

Mackinac Island is located nearly seven hours northeast of Kankakee County in a journey that includes a ferry ride.

Here are some websites where you can start to plan your own trip: