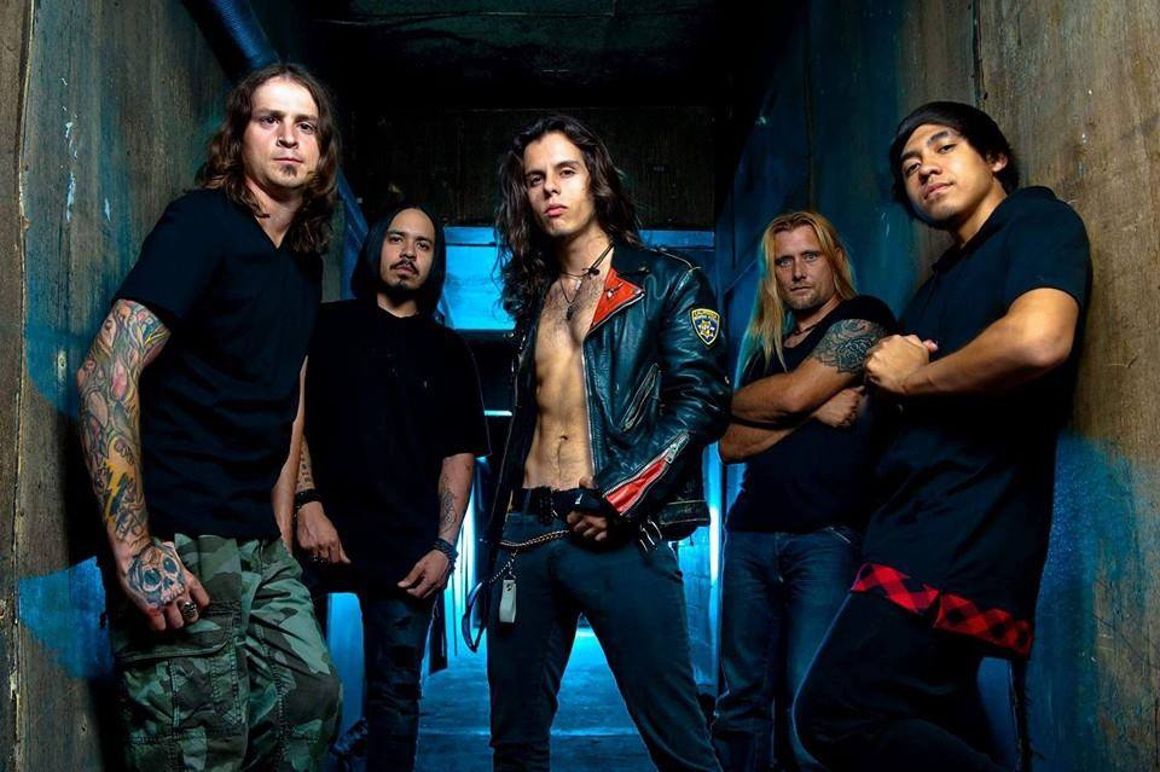 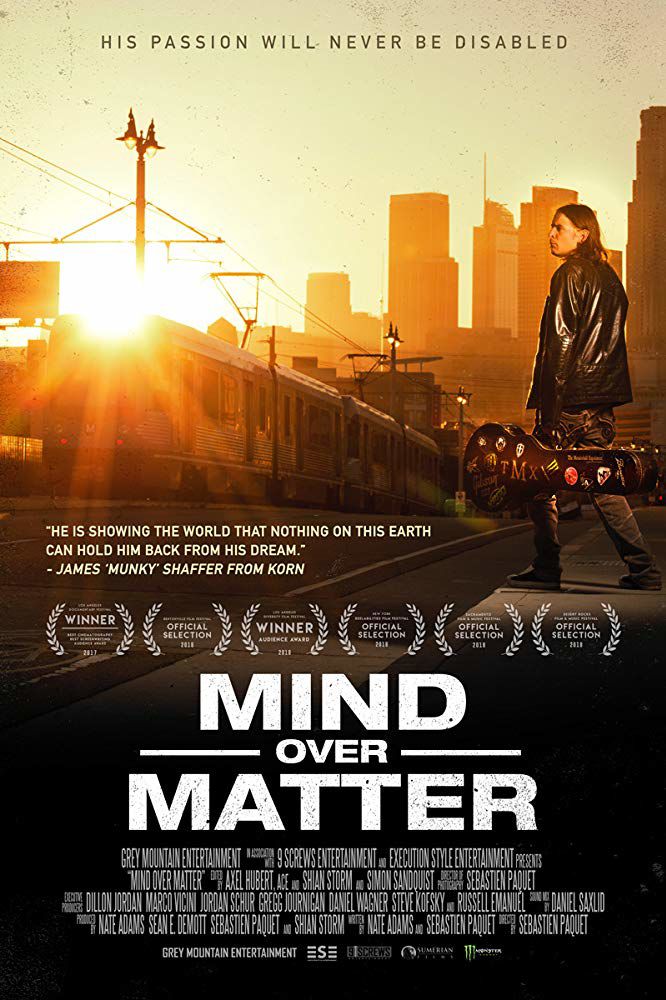 “Mind Over Matter,” directed by LA-based French filmmaker Sébastien Paquet, is a documentary detailing Brandon Mendenhall’s life as a guitarist with cerebral palsy. The PG-13 film can purchased digitally on iTunes and on DVD from Amazon and mindovermatterfilm.com. 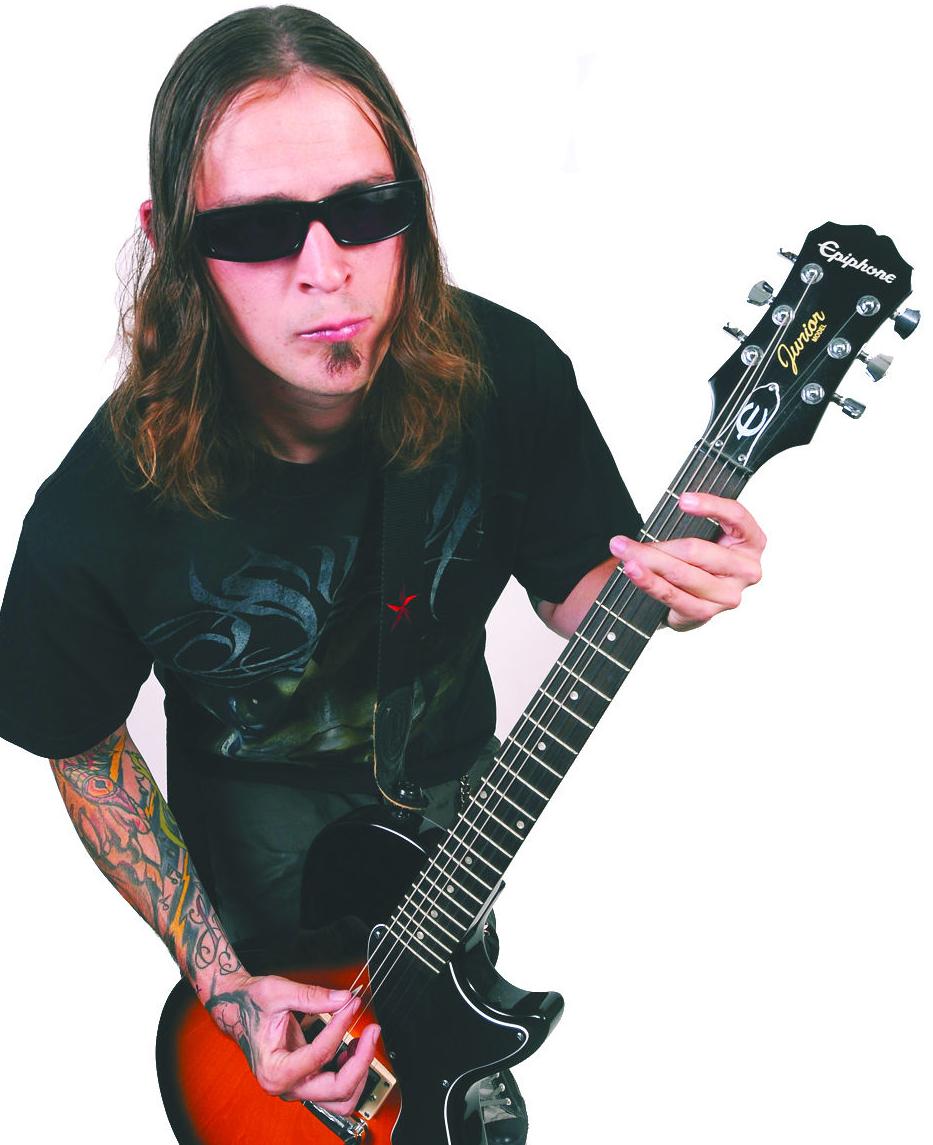 Bourbonnais native Brandon Mendenhall is the subject of the new documentary, “Mind Over Matter,” detailing his life as a musician with cerebral palsy.

“Mind Over Matter,” directed by LA-based French filmmaker Sébastien Paquet, is a documentary detailing Brandon Mendenhall’s life as a guitarist with cerebral palsy. The PG-13 film can purchased digitally on iTunes and on DVD from Amazon and mindovermatterfilm.com.

Bourbonnais native Brandon Mendenhall is the subject of the new documentary, “Mind Over Matter,” detailing his life as a musician with cerebral palsy.

“Music is the most powerful unexplainable force on Earth,” said Brandon Mendenhall in the beginning of “Mind Over Matter,” a documentary released Friday about the Bourbonnais native’s life as a musician with cerebral palsy.

Mendenhall, 35, was diagnosed with CP as a child, which affects the left side of his body, including his eye, hand and foot, as well as his speech.

Growing up, Mendenhall was told by his peers, teachers, doctors and even his grandfather, Ronnie Mendenhall, he couldn’t become a musician.

Mendenhall defied the odds of his illness to create his metal band The Mendenhall Experiment, known as TMX, in 2008. With Mendenhall on guitar, they’ve rocked through nearly every venue on Sunset Boulevard in Los Angeles, where Mendenhall now lives. TMX was included in the lineup of the annual Aftershock Festival in Sacramento, Calif., in 2013 and again in 2016, and they’ve played countless other shows across the U.S.

TMX played its first show at Paul’s Place in Kankakee on Aug. 16, 2008, and Mendenhall has come home to play in the Kankakee area several times since then, the most recent being at Bradley’s The Looney Bin in August for the band’s 10th anniversary show.

“Mind Over Matter” is directed by LA-based French filmmaker Sébastien Paquet, who primarily works to create digital productions with metal bands such as Korn. The documentary premiered in March 2018 at ReelAbilities, the 10th annual film festival in New York showcasing the work by, or about, people with disabilities.

The film received several awards from various film festivals, most notably the Los Angeles Documentary Film Festival, known as DOC LA. At the festival in June 2017, Paquet won for Best Cinematography; Paquet and co-writer Nate Adams won for Best Screenwriting; and the film itself won the Audience Award in the feature film category.

Several areas within Kankakee County appear in the film, including the trailer park where Mendenhall grew up; Bradley-Bourbonnais Community High School, where Mendenhall attended; Paul’s Place in Kankakee, where the band played its first show; and the Daily Journal office, where Mendenhall was interviewed by late reporter Dennis Yohnka in 2014 and 2015.

The Daily Journal spoke with Mendenhall and Paquet about the filmmaking process, the documentary's most memorable scenes and what metal music really means. Questions and answers have been edited for length and clarity.

Aryana Adkanian (AA): Can you tell me about the filmmaking process?

Sébastien Paquet (SP): [“Mind Over Matter”] started with two friends and a camera, and it turned into this big, epic Hollywood production.

We met about 15 years ago. I had moved from France, where I was born, to Los Angeles, and then Brandon moved pretty much at the same time from his town in Illinois to L.A., as well. We met at a show. We became friends right away, and 10 years deep into our friendship, we decided to build an alliance, him and I, to create this film. I had directed previous music videos and documentaries for bands and so forth, but I really wanted to hone in on my storytelling skills, and I was trying to find the best topic to do my first feature doc on.

On Christmas morning 2013, I wake up and I’m like, “Whoa. The best story ever — ever! — has been right under my nose this whole time. I’ve been friends with this guy for 10 years; I know everything about his life, and his is the most beautiful, inspiring underdog story ever. I have to call him right now, and we have to do a preproduction meeting right now to find out every single tiny detail of his entire life story to see if there’s really enough substance to do a feature doc on him.”

Brandon Mendenhall (BM): Sébastien told me, “Man, buckle up because I’m gonna be following you around with a camera in your face for the next few years.”

SP: After an eight-hour-long conversation, it definitely was apparent that was the case.

So, for the next few years, I followed him around everywhere, between rebuilding his band time and time again, limping his life away in the streets of L.A. trying to make it, trying to make connections, trying to pursue his musical endeavors and never taking “no” for an answer.

As I was following him around, it became apparent I was capturing everything in the “now,” but there, obviously, was 30 years of his life to document from before the cameras started moving.

So, we jumped on a plane [in 2014] and spent a week interviewing absolutely everyone in Bradley, Bourbonnais, Kankakee, all those towns — the high school teachers, the mayor of Bradley, the high school friends and Brandon’s grandmother, mother, — everyone and anyone.

AA: Did you film all scenes yourself with your personal camera?

SP: I shot 95 percent of it myself … with some help at some of the shows we documented, especially the Aftershock 2016 performance — arguably, the biggest live performance of Brandon’s career.

BM: It was most definitely the most memorable performance of my career.

BM: During Korn’s Aftershock performance, there’s a scene [in the documentary] where I have a conversation with [James] “Munky” [Shaffer, the guitarist of Korn] about my performance that day with my band. He told me how proud he is of me, and, of course, I said, “Thank you. I couldn’t have done this without you.” And he said to me, “You would. It’s truly in your heart to succeed.”

SP: And what’s even more amazing about it is it was completely unscripted. That was really something spontaneous that happened in between two songs in the middle of Korn’s performance in front of an ocean of people.

Luckily, I was ready with camera in hand to document the magical moment.

AA: Brandon, were there any parts of the documentary you found difficult to film?

BM: There were a few really tough parts. Obviously, the scenes about the death and passing of my beloved grandfather. Those were super personal and extremely hard for me. I actually break down and cry in one scene.

The scenes where I talk about my drug addiction and how I overcame that was [also] hard for me [to film] because that was something I kept close to myself, and I quietly went through that phase of my life and the recovery.

It wasn’t something that was public knowledge to a lot of people, so to be 100 percent transparent and to be honest about it was hard to do.

SP: It was very difficult for you to be an open book and to talk about it, but everything happens for a reason. You know, you had to go through that to actually tell your story. […] And you can inspire people to not fall through those traps.

BM: Yeah, I’m really proud — well, I’m not proud of it — but I’m happy the negative stuff I went through can be turned into a positive.

And I think that’s an underlying theme of this entire film — someone who has been dealt a difficult hand in life constantly turns a negative into a positive and keeps going and never gives up. Because he keeps going and continues to preserve through anything, he grows through it and becomes a source of inspiration for almost anybody that sees the film.

AA: What type of person do you think would enjoy watching the film?

BM: I personally think this film is for anybody.

It’s a musical-based documentary, but the story goes for anybody trying to overcome obstacles.

SP: We completed this film in very late 2017, and spent the entire year of 2018 traveling around the U.S., going to many, many film festivals — even some outside of the country — and every single time at every single screening, we would get [positive feedback.]

There was even an old lady [at one festival] who was like, “I don’t know who those Korn people are, and I don’t really understand that noise you call music, but I cried five times.”

The story is about never taking “no” for an answer, whether or not you listen to rock’n’roll or any similar type of music.

BM: Those are always the best stories. The older people that come up to us, or even young people that would never listen to that kind of rock music, and say, “I don’t prefer your style of music, and I don’t understand it — it’s not my thing — but your story is so powerful that you’ve inspired me.”

Musicians, especially hard rock musicians, they get typecasted because, you know, they have long hair and tattoos and society as a whole, I think, looks at these people and thinks they’re criminals or bad people and to be completely honest, most of the people in the rock ‘n’ roll community have the biggest hearts.

AA: Brandon, have your family and the band watched the film? If so, what do they think?

BM: We actually had a private friends-and-family screening this past August at The Looney Bin in Bradley [the day after the band’s 10th anniversary performance]. By the end of the film, the whole room was in tears.

I cannot say how much it means to me to move away from my hometown with this big dream and all these big aspirations to be a rock star […] and then be able to come back as this “hometown hero” to a lot of people… it’s just mind-blowing. I mean, I grew up in a trailer park. I spent most of my life there, and I had this crazy dream to go to L.A. and I ended up working hard enough to be successful and bring it back home.

“Mind Over Matter” can be purchased digitally on iTunes or in DVD format (with three deleted scenes) from Amazon and mindovermatterfilm.com.

From pain to persistence: Black Lives Matter rally at courthouse