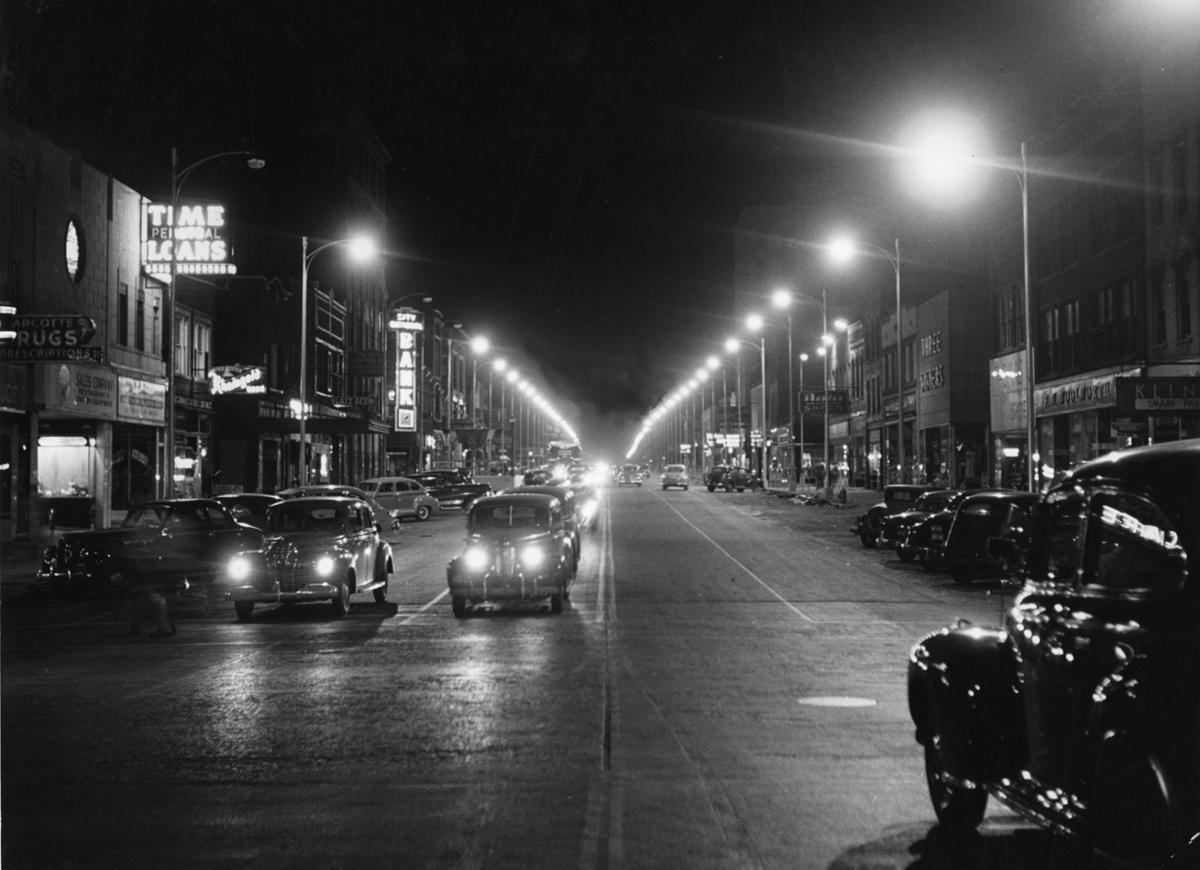 Bright new lighting in downtown Kankakee greeted shoppers in 1949. This photo, looking eastward on Court Street from East Avenue, was taken soon after the new light fixtures were installed in the summer of 1949. 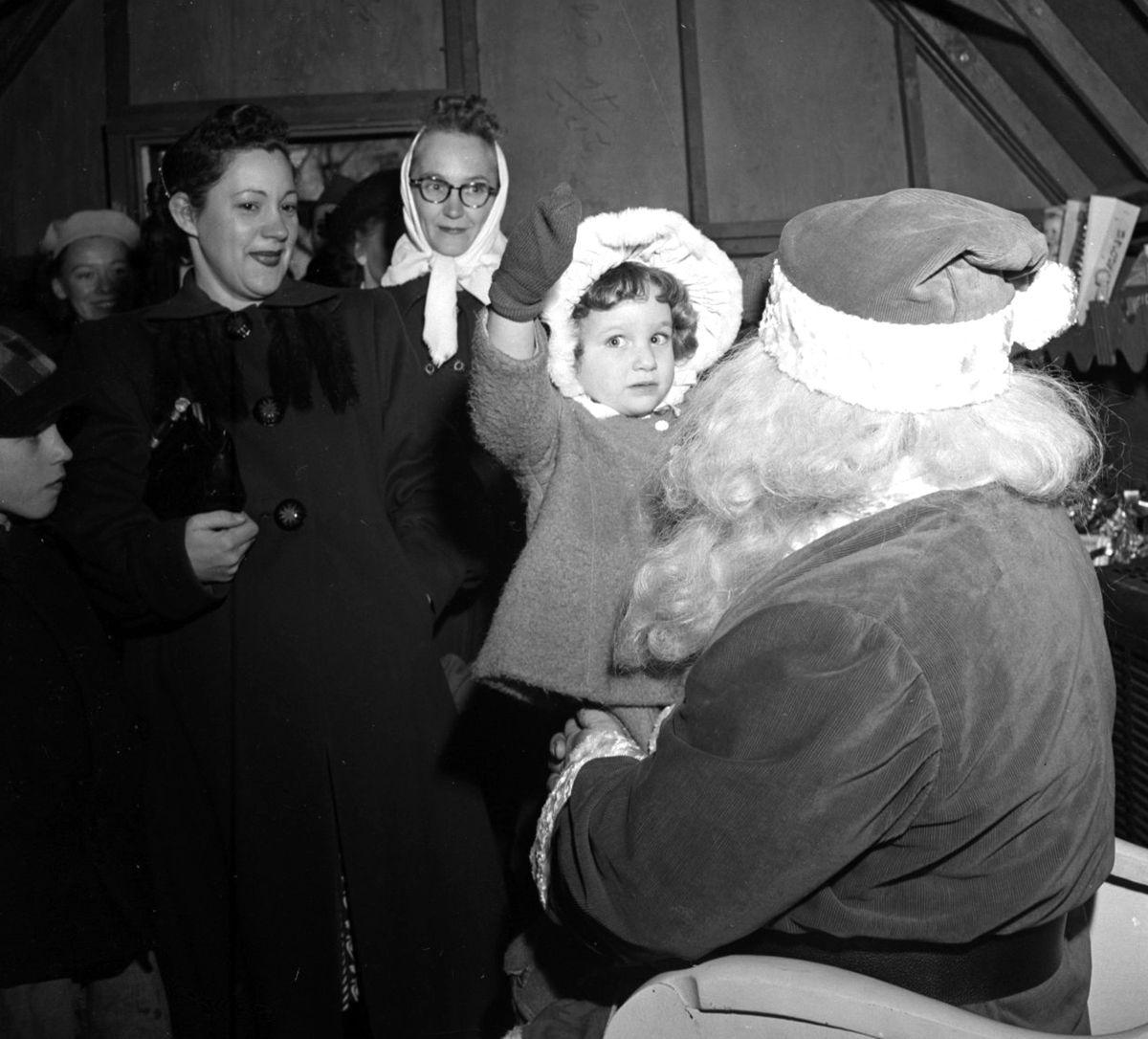 This young lady seems more interested in posing for the camera than confiding in Santa. In the weeks preceding Christmas, hundreds of youngsters visited with Santa in his “gingerbread house” on the lawn of the Kankakee County Courthouse.

Bright new lighting in downtown Kankakee greeted shoppers in 1949. This photo, looking eastward on Court Street from East Avenue, was taken soon after the new light fixtures were installed in the summer of 1949.

This young lady seems more interested in posing for the camera than confiding in Santa. In the weeks preceding Christmas, hundreds of youngsters visited with Santa in his “gingerbread house” on the lawn of the Kankakee County Courthouse.

The year 1949 was a good one for Kankakee County — the austerity and uncertainty of World War II had faded away and the local economy was booming with new industries creating jobs, hundreds of homes being built and plenty of merchandise on the shelves of stores.

Families were ready to spend money, especially at Christmas time. In an era before shopping centers and enclosed malls, the place to shop was downtown Kankakee.

Literally hundreds of businesses, from large department stores such as Aldens and The Fair Store, to storefronts such as the Petite Shop and Clara Mae’s Confectionery, lined the streets of downtown, drawing crowds of shoppers from across Kankakee County and adjoining areas.

In 1949, the “Christmas Shopping Season” began quite a bit later than it does today: Store displays and the first advertisements began to appear a week or so before Thanksgiving. On Nov. 14, a newspaper ad invited shoppers to “Visit Swannell’s Toyland,” which offered “The biggest, most complete stock of toys we have ever had!” The toy department was located in the basement of Swannell’s Hardware Store at Court Street and Dearborn Avenue.

A pre-Christmas trip downtown with the children was a “must,” so they could scout the possible items to list in their letters to Santa Claus. By early December, it seemed as if every store in town offered a large selection of toys. In addition to the department stores, toys were sold by the Blue Star Auto Store at 281 E. Court, Paul Lang Motor Sales on North Harrison (which offered “Nationally known Shelby Bicycles featuring Donald Duck”) and many other retailers.

An interesting combination gift was advertised on Dec. 2 by Samuels clothing store, located on Schuyler Avenue, just north of Merchant Street. It was a line of colorful “Mary Jane” brand dresses for little girls; each dress was accompanied by a doll with a matching outfit, described as “a cuddly copycat companion.”

The same day that advertisement appeared, Santa Claus arrived in Kankakee aboard a helicopter that landed at Alpiner Park. Accompanied by a police escort and the St. Patrick (now McNamara) High School band, he proceeded down Court Street to his “gingerbread house” headquarters on the lawn of the Kankakee County Courthouse. For the next three weeks, he would receive young visitors there and listen to their gift requests (there also was an oversized mailbox outside the gingerbread house for those who wanted to drop off a written list for Santa Claus).

For serious shopping (without the children), downtown stores would remain open until 9 p.m. from Dec. 16 through Dec. 23. Shoppers also would enjoy a more inviting, brightly-lit business district than in previous years. In June 1949, Kankakee’s downtown had become one of the most well-lit in the entire country, when 198 powerful new mercury vapor streetlights were switched on.

Other downtown streets — Court, Merchant and Station, as well as East, Dearborn and Indiana Avenue — also were lined with a variety of stores.

While most Christmas gift shopping was (and probably still is) done by women, at least one Kankakee retailer mounted an effort to get males involved.

On Dec. 14, The Fair Store advertised that on the following evening, the store would host its second annual Men’s Night “to acquaint the men of Kankakeeland with this store and its helpful services.” The ad noted that “Those of you who came to our party last year will remember how easy this Christmas shopping business becomes in a store like The Fair … you will recall also that you spent a very pleasant evening.” Attendees were assured that the store would arrange “special charge accounts to keep gifts secret” and would handle gift wrapping and delivery.

In 1949, cash still was king for most retail transactions. For larger purchases, such as a television set (many households were buying their first TV that year), stores offered “time payment” plans that allowed you to enjoy your purchase while paying for it in monthly installments. Aldens advertised, “No money down; 24 months to pay,” on a $299.95 Raytheon TV with a 16-inch circular screen.

When downtown stores closed their doors at 5:30 p.m. Saturday, Dec. 24, the 1949 Christmas shopping season officially came to an end.

In the Christmas Eve issue of the Kankakee Daily Journal, however, there was a glimpse of the future: a large advertisement from The Fair Store, announcing that its “great annual, after-Christmas Apparel Clearance” would begin at noon Tuesday, Dec. 27.

Jack Klasey came to Kankakee County as a young Journal reporter in 1963, and quickly became “hooked” on local history. In 1968, he co-authored “Of the People: A Popular History of Kankakee County.” Now retired from a career in the publishing industry, he remains active in the history field as a volunteer and board member at the Kankakee County Museum. He can be contacted at jwklasey@comcast.net.