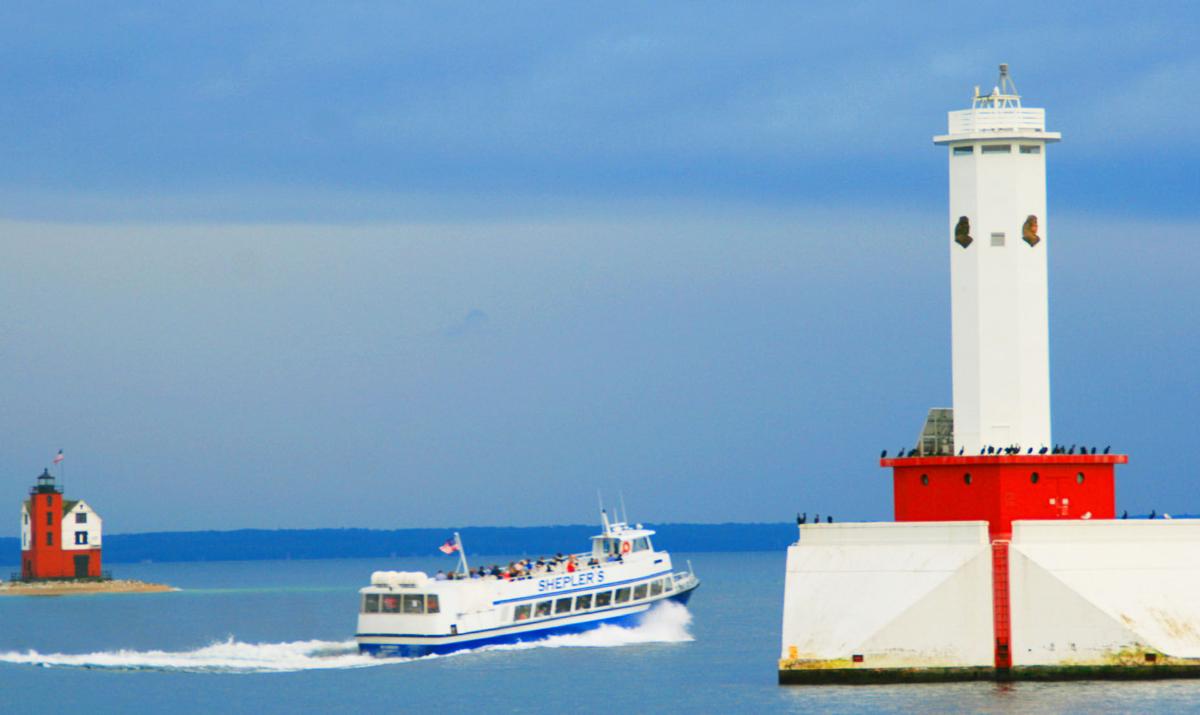 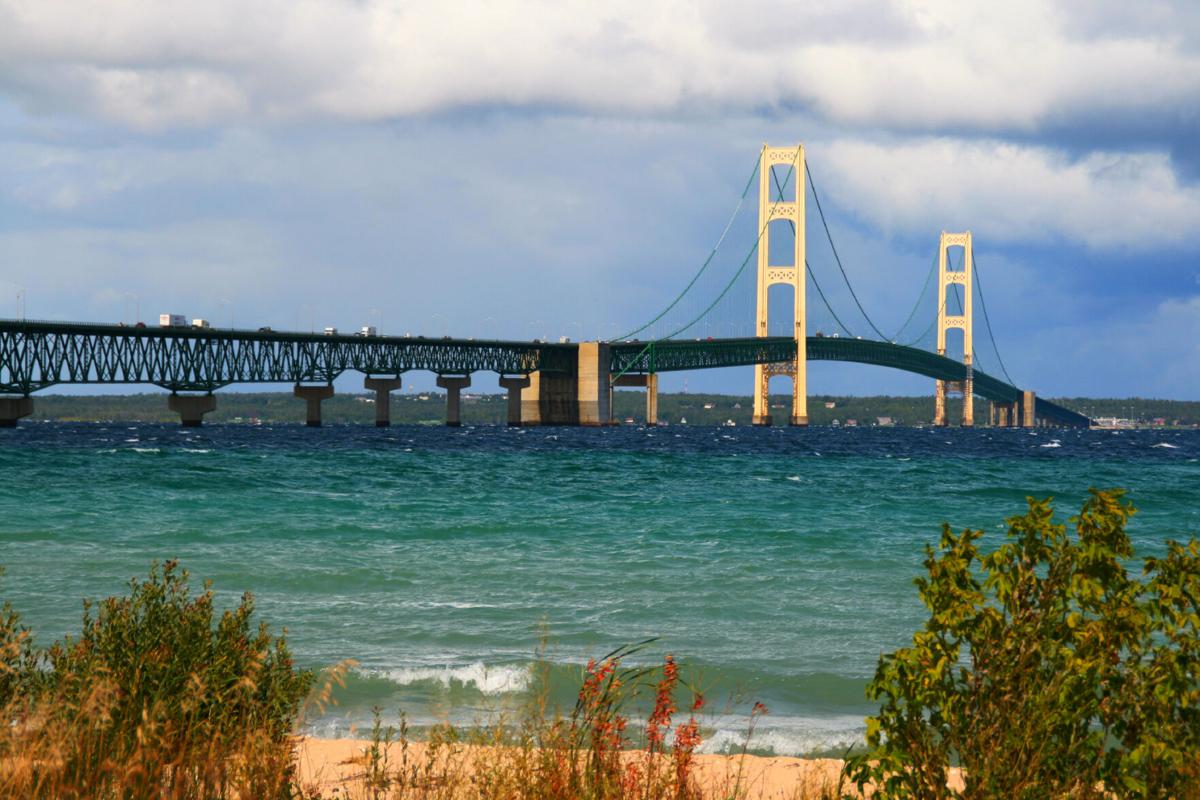 There is a stylish beauty to the foliage-green spans that gracefully curve above the rich aqua-blue waters below. 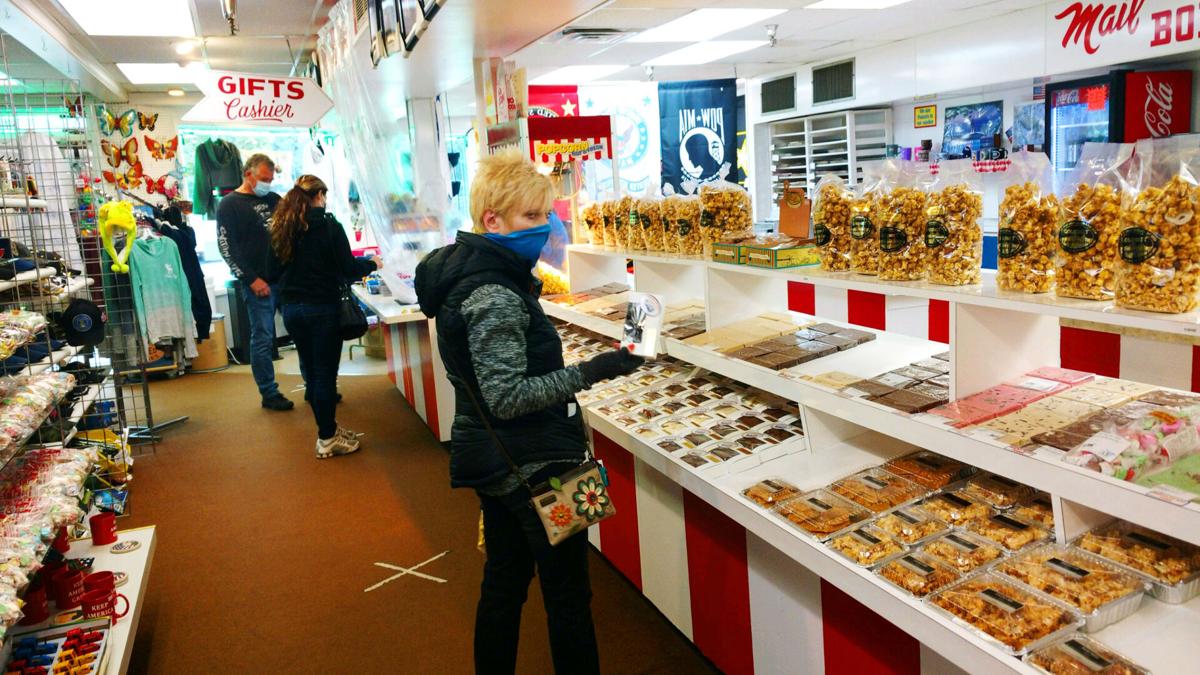 Touristy items you really don’t need but absolutely can’t leave without are aplenty. 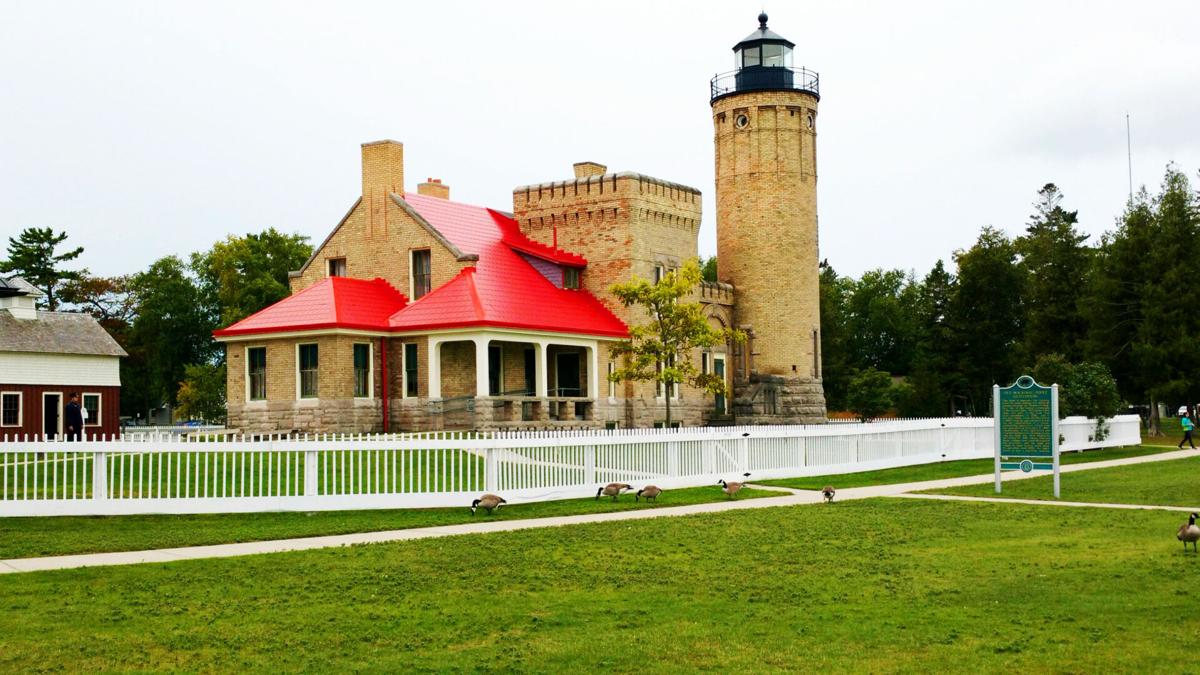 The cream-colored brick castle provides insight into the lives of its keepers and their families. 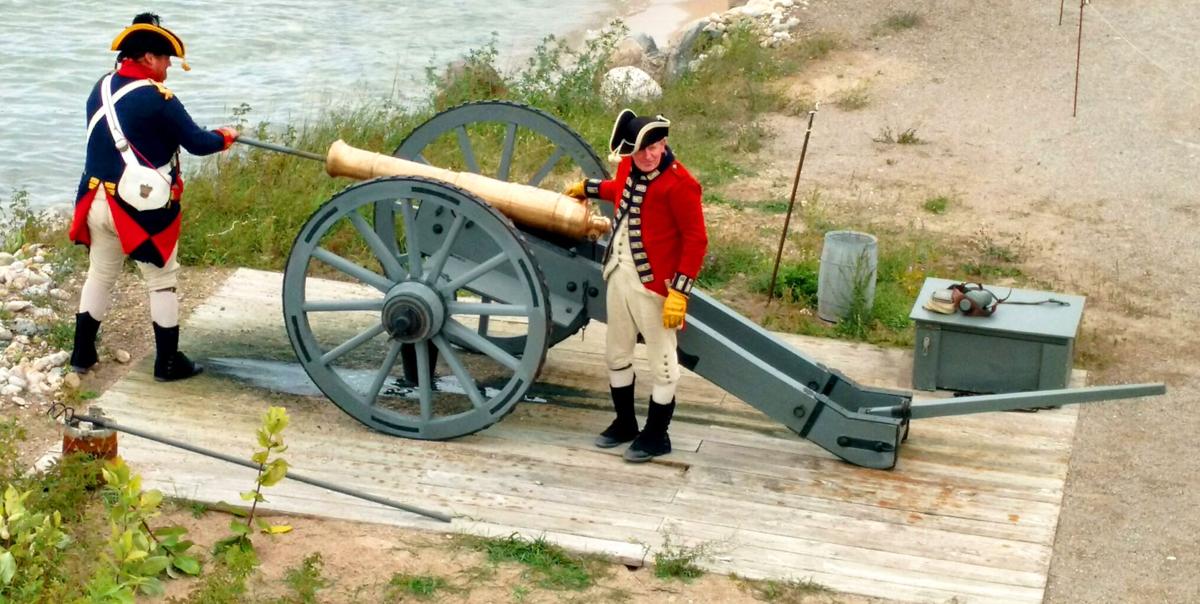 Having some explosive fun at Fort Michilimackinac in Mackinaw City. 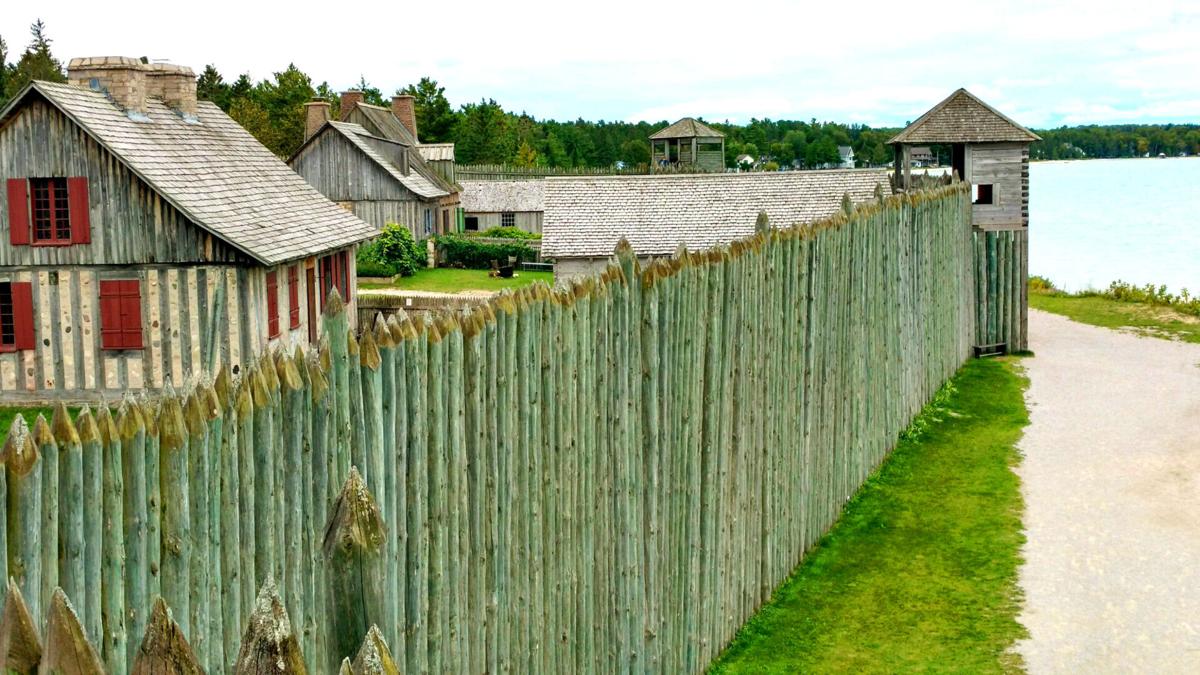 Fort Michilimackinac is a a reconstructed 18th-century fort and fur trading village. 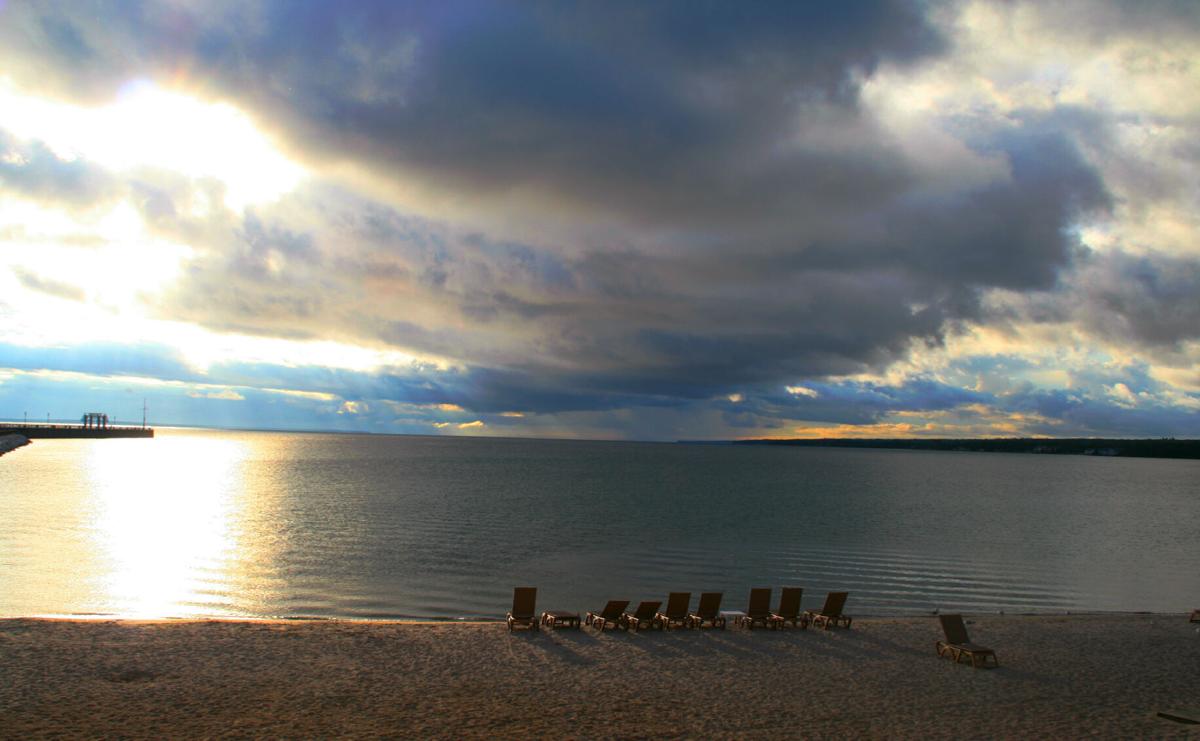 The sun trying hard to push back the overcast skies of fall.

There is a stylish beauty to the foliage-green spans that gracefully curve above the rich aqua-blue waters below.

Touristy items you really don’t need but absolutely can’t leave without are aplenty.

The cream-colored brick castle provides insight into the lives of its keepers and their families.

Having some explosive fun at Fort Michilimackinac in Mackinaw City.

Fort Michilimackinac is a a reconstructed 18th-century fort and fur trading village.

The sun trying hard to push back the overcast skies of fall.

I can’t help but wonder if the good folk of Mackinaw City don’t feel just a bit slighted at times. Usually mentioned as an afterthought, if mentioned at all, when it’s more famous sister, Mackinac Island, is spoken of, the city seldom gets its due. Maybe that’s why it seems a little more laid-back. Even the city’s phonetically spelled name seems a bit less pretentious.

However, as any one of the 800 residents of The Village of Mackinaw City would tell you, it has a lot to offer.

We settled into one of many chain hotels located on the beach of Lake Huron. Decidedly a summer time draw, the beach provides access to the cool waters on a warm, sunny day and are an inviting relief. However, on a cool early fall day, they were quite empty except for the ubiquitous gulls.

After slipping on our walking shoes, we set out to explore the very walkable community. Mackinaw City juts into the Straits of Mackinac, which connects the Great Lakes of Huron & Michigan. It also is the gateway to Michigan’s Upper Peninsula and its conveyance is the Mighty Mac.

The Mackinac Bridge is a suspension bridge that spans the Straits of Mackinac connecting the Upper and Lower Peninsulas. Opened in 1957, the 5-mile long bridge is the longest suspension bridge in the Western Hemisphere. It is hard to ignore. Dominating the village’s northern skyline, its ivory painted towers rise above the Straights 552’. There is a stylish beauty in its 24” thick cables weighing in at 11,840 tons that cradle the foliage-green spans that gracefully curve above the rich aqua-blue waters below. As the sun sets, festooned with dozens of navigational lights, it becomes a festival of illumination.

Nearby, on the pebble-strewn shores of the Straits, stands Old Mackinac Point Lighthouse. Built in 1892, it remained in operation until 1957, when the construction of the nearby Mackinac Bridge provided a readymade stanchion for navigational lights and made the lighthouse obsolete.

Situated within the boundaries of Michilimackinac State Park, the cream-colored brick “castle” offers insight into the lives of its keepers and their families. Guided tours Keepers’ Quarters which have been restored to their 1910 appearance are hosted by a costumed “Keeper.” The grounds also include the fog-signal building which provides an ear-straining demonstration of the steam-driven siren and a reconstructed warehouse featuring displays and original artifacts that tell the story of the numerous shipwrecks that dot the Straits of Mackinac.

The Straits see quite a bit of freighter traffic during the shipping season. These “boats” can be upward of a 1,000 feet long. Based on the several camera toting “boat-nerds” joining me at water’s edge, photographing a freighter passing under the bridge is a favorite activity.

A few hundred yards further down the shore-line path and passing underneath the bridge, you will find Fort Michilimackinac, a reconstructed 18th-century fort and fur trading village.

As you walk into the site, you are stepping back in time to 1777. We explored over a dozen buildings which provide a historical representation of early Mackinaw life. Costumed interpreters reenact daily life and are happy to answer any questions and explain in depth life on the frontier in the 1700’s. Young and old alike enjoyed the explosive demonstration of the fort’s cannon.

After indulging my historical curiosities, we headed to Central Avenue to satisfy my wife’s bargain hunting itch. The many emporiums lining downtown offer a varied selection of those touristy items you really don’t need but absolutely can’t leave without; bags of popcorn coated in an assortment of flavors, T-shirts touting your visit to Mackinaw City and, of course, fudge boxed in all of its varieties.

For those items you might actually need such as fishing lures, camping equipment or replacing the odd loose screw, there’s Coffman Hardware. Housed in a nearly century-and-half old building, Coffman’s also has the largest pocket knife collection I’ve ever seen.

There are a great many options for dining. For dinner, we ate at Audie’s Family Restaurant. Established in 1972, this iconic supper club is a throwback. From the fresh-baked bread laid-out on white table cloths to the stuffed animal heads lining the wood-paneled walls, it exudes up-country warmth. And the fresh-caught baked Almondine whitefish and beer-battered perch placed before us were all that we could ask and then some.

The following morning we awoke to the sun trying hard to push back the overcast skies as we walked into the warm embrace of Mackinaw Bakery & Tea Company. Leaving with a bag of fresh baked cookies and donuts, we passed a line of early morning denizens that extended out the door who stood in patient anticipation.

For a nautical adventure there is the United States Coast Guard icebreaker Mackinaw, located at the old railroad docks on Lake Huron, and is open for self-guided tours. The largest Great Lakes icebreaker ever built, it was constructed as part of the war effort during World War II and retired in 2006. Unfortunately, the day we stopped by it was not open.

Besides Old Mackinac Point Lighthouse, Michigan has more lighthouses than any other state (at nearly 120) and the Straits area is home to more than a dozen of these historic navigational aids. Shepler’s Ferry offers two different lighthouse tours, one each eastbound or westbound. Besides providing wonderful views of various lighthouses, you’ll learn their history and maritime lore. You’ll even get to pass underneath The Mackinac Bridge.

Keyhole Bar and Grill rounded out the day. Good pub food and 45 years of keys and locks cover the walls, bars, and tables. As we walked back to our room along the shore, we were serenaded by waves lapping against the beach and the occasional mournful cry of a gull.

Driving out of town the next morning, I had to rethink my original supposition. Although the Village of Mackinaw City is beyond the Island, I don’t think they have anything to feel slighted about.

Frank Hosek is a Bourbonnais resident and often shares his traveling adventures with Daily Journal readers.