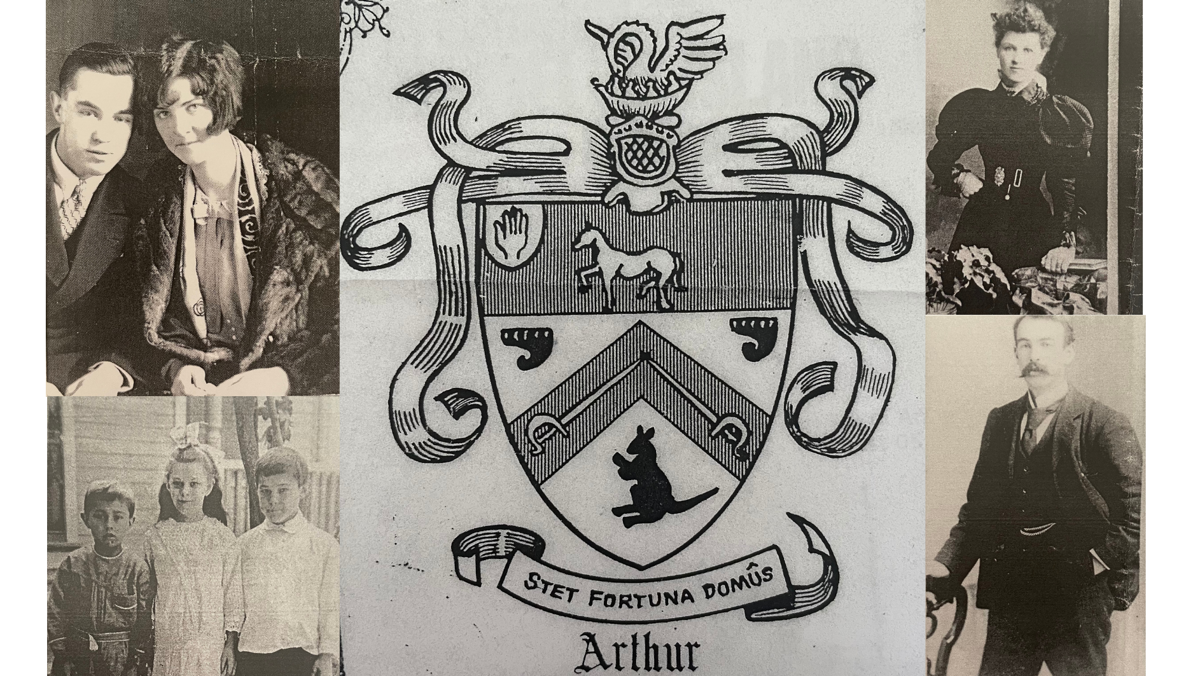 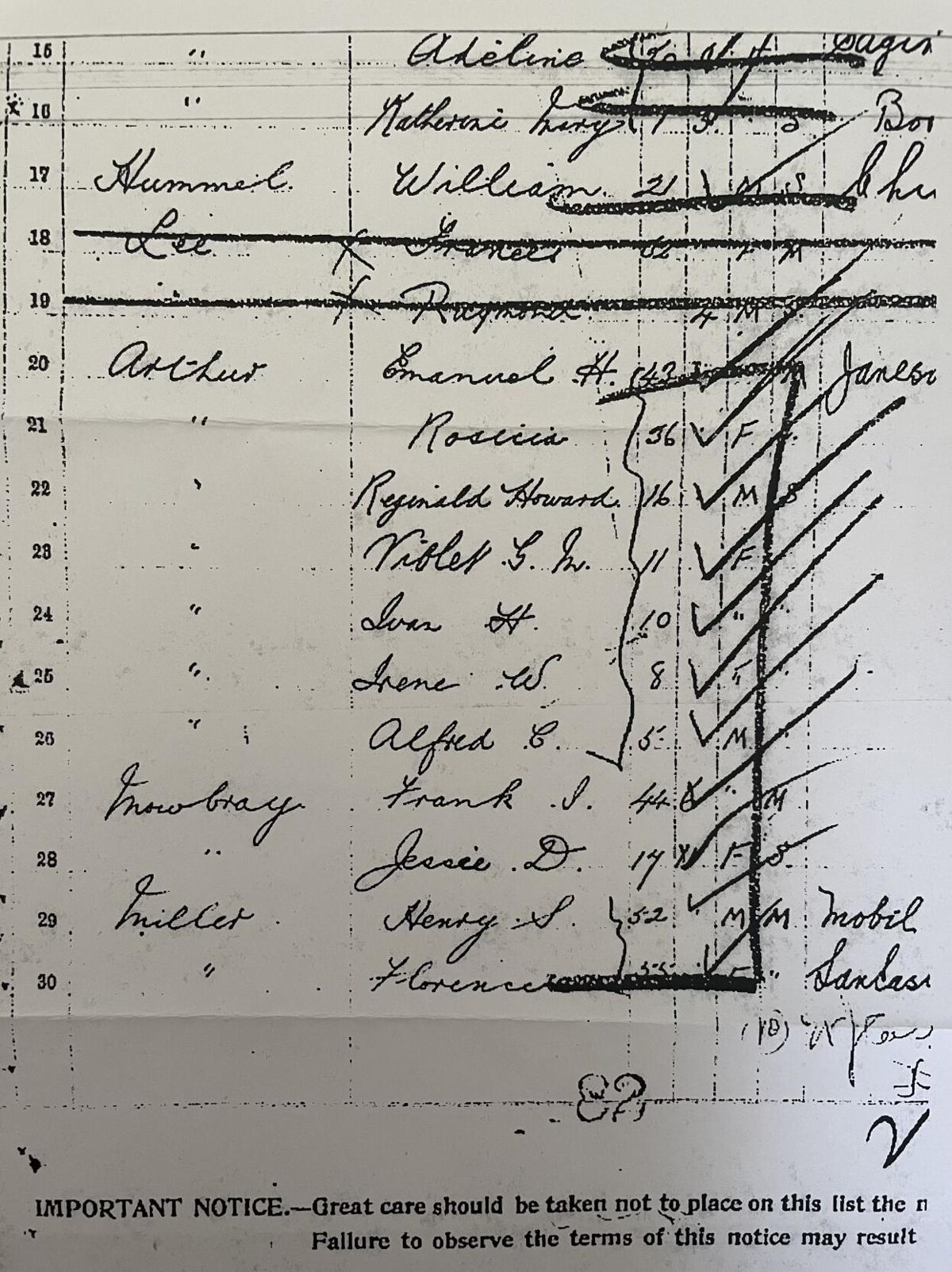 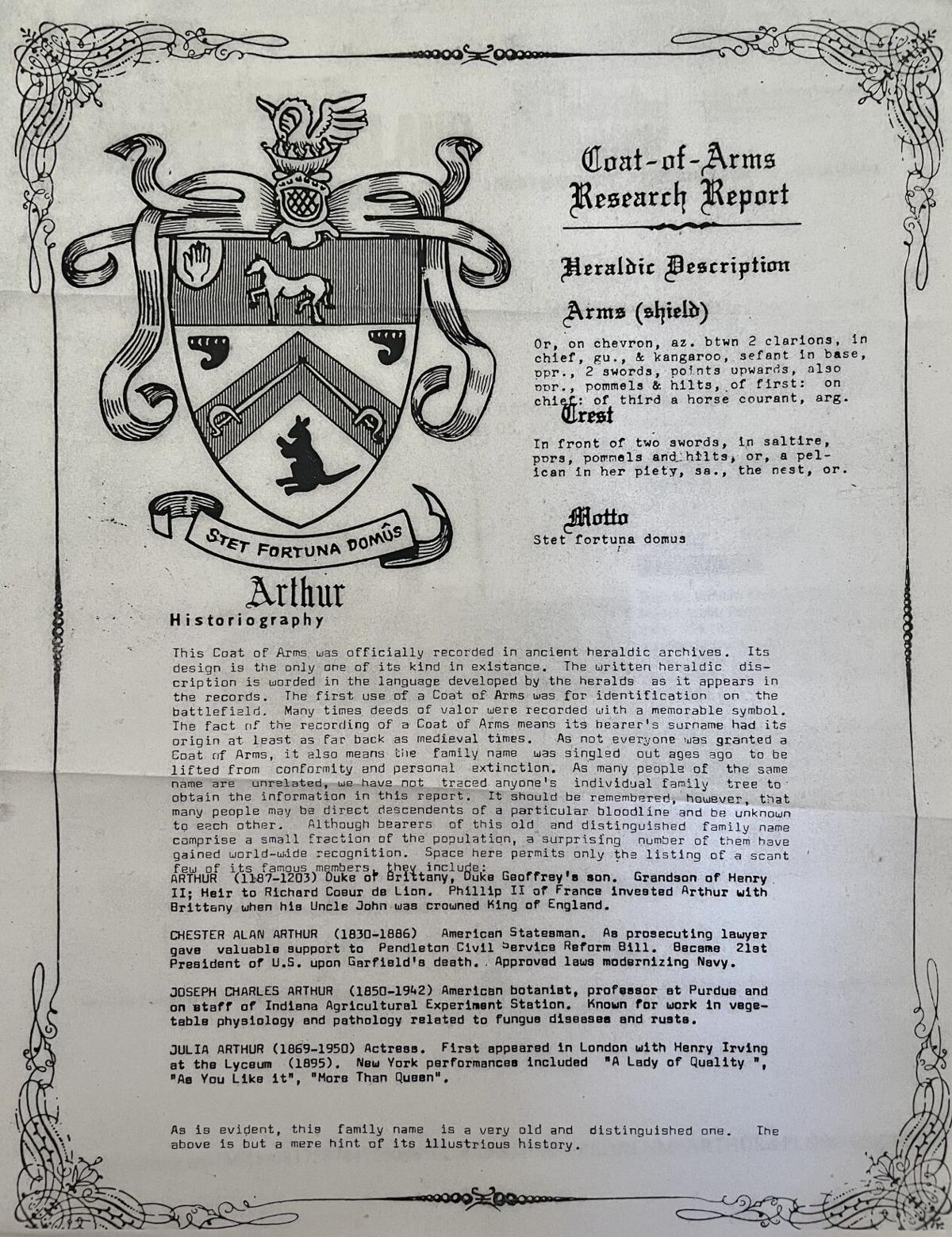 Gladys Fowler, an 80-year-old Bradley resident, came across a research report on her family’s Coat of Arms. The document details the history of the Arthur family, Fowler’s maiden name, which includes the 21st President of the United States, Chester A. Arthur. READ MORE.

Gladys Fowler, an 80-year-old Bradley resident, came across a research report on her family’s Coat of Arms. The document details the history of the Arthur family, Fowler’s maiden name, which includes the 21st President of the United States, Chester A. Arthur. READ MORE.

While moving and cleaning out dressers and closets, it’s common to come across keepsakes, such as photos or ticket stubs that have been forgotten. In the case of Gladys Fowler, she came across a keepsake she never had seen before.

The 80-year-old Bradley resident came across a research report on her family’s Coat of Arms. The document details the history of the Arthur family, Fowler’s maiden name, which includes the 21st President of the United States, Chester A. Arthur.

“I found that shield of arms in my stuff when I was moving into this nursing home,” Fowler said. “I have never seen it before in my life. I have no idea where it came from, but it is my family. But, I’m the only one left.”

Fowler shared her first thoughts when coming across the document were, “I don’t believe it. Nobody ever told me about it. I didn’t even know it existed.”

The research report details a “Heraldic Description,” and the Coat’s motto reads “Stet Fortuna Domus,” which roughly translates to “Let the fortune of the house stand.” The arms (shield) are detailed as, “Or, on chevron, az. btwn 2 clarions, in chief, gu., & kangaroo, sefant in base, ppr., 2 swords, points upwards, also ppr., pommels & hilts, of first: on chief: of third a horse courant, arg.”

The crest is described as, “In front of two swords, in saltire, pprs, pommels and hilts, or, a pelican in her piety, sa., the nest, or.” The document states “This Coat of Arms was officially recorded in ancient heraldic archives.

Notable Arthurs on the document include: Arthur (1187-1203), the Duke of Brittany; Chester Alan Arthur (1830-86), an American Statesman who became 21st president after the death of President Garfield; Joseph Charles Arthur (1850-1942), an American botanist and professor at Purdue; and Julia Arthur (1869-1950), a theater actress who performed in “A Lady of Quality” and “As You Like It.”

When sharing the Coat of Arms, Fowler also shared the Ellis Island papers documenting her father’s trek across the ocean with Fowler’s grandparents. She has had the documents in her possession for years.

The Arthur family traveled by ship from England to America in August 1912 — just four months after the sinking of the Titanic. Fowler’s father, Alfred Arthur, was 5 years old at the time. He and Fowler’s grandfather traveled aboard the ship, The St. Louis, and settled in Kankakee shortly after their arrival to North America.

Fowler recalls her father discussing what the Atlantic Ocean looked like four short months after the now-iconic Titanic struck an iceberg and sank on April 14, 1912.

“My dad said there was all kinds of stuff in the water where it had gone down, and he never had forgotten that,” Fowler said. “His father told him that the ship named ‘Titanic’ had just sunk there a few months before.”

Records from Ellis Island arrivals at that time detail a passenger’s name, age, place of residence, mode of travel, gender, marital status, port of departure and citizenship. A scan of the file shows the signature of Fowler’s grandfather, aged 43 at the time of arrival. Arthur also signed for his wife and five children.

Fowler also found a variety of family photos and shared the Arthur family owned the very first theater in Kankakee, the Lyrica. She also is related to the owners of Arthur Motor Works.

“There were six of us kids, and I was the youngest, but it’s hard to be the youngest one and be left with all five of them gone,” Fowler said. “Because you have all of your memories from your whole life.”

Crest: “In front of two swords, in saltire, pprs, pommels and hilts, or, a pelican in her piety, sa., the nest, or.”

"As evident, this family name is a very old and distinguished one. The above is a mere hint of its illustrious history."

The village of Bourbonnais uncovered a significant piece of its past in 2011 when trustees acquired a parcel of land at the corner of South Main and Coyne streets.