You are the owner of this article.
Edit Article Add New Article
You have permission to edit this article.
Edit
Home
News
Sports
Opinion
Life
Obituaries
HomeFinder
Jobs & Classifieds
Lifestyles of Kankakee County
1 of 5 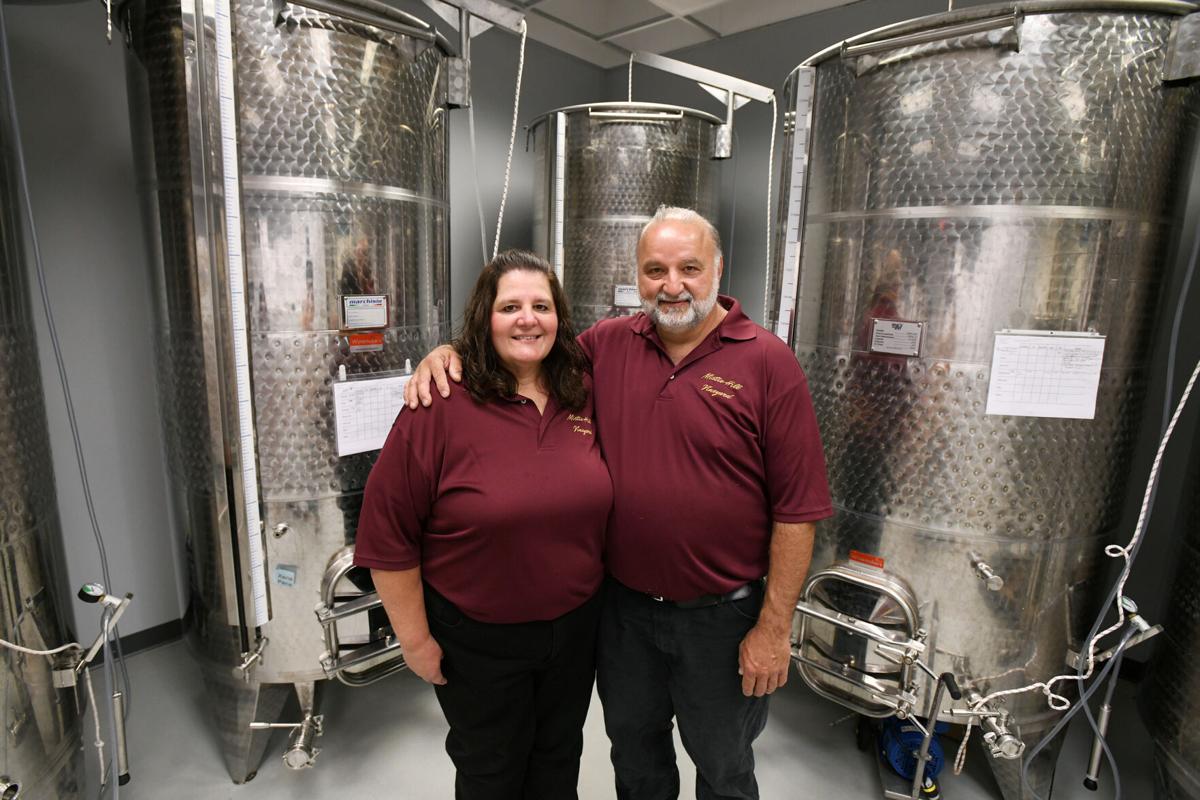 Rich and Debbie Strylowski, owners of Mistie Hill Vineyard in Custer Park, stand by the wine fermentation tanks on their property. 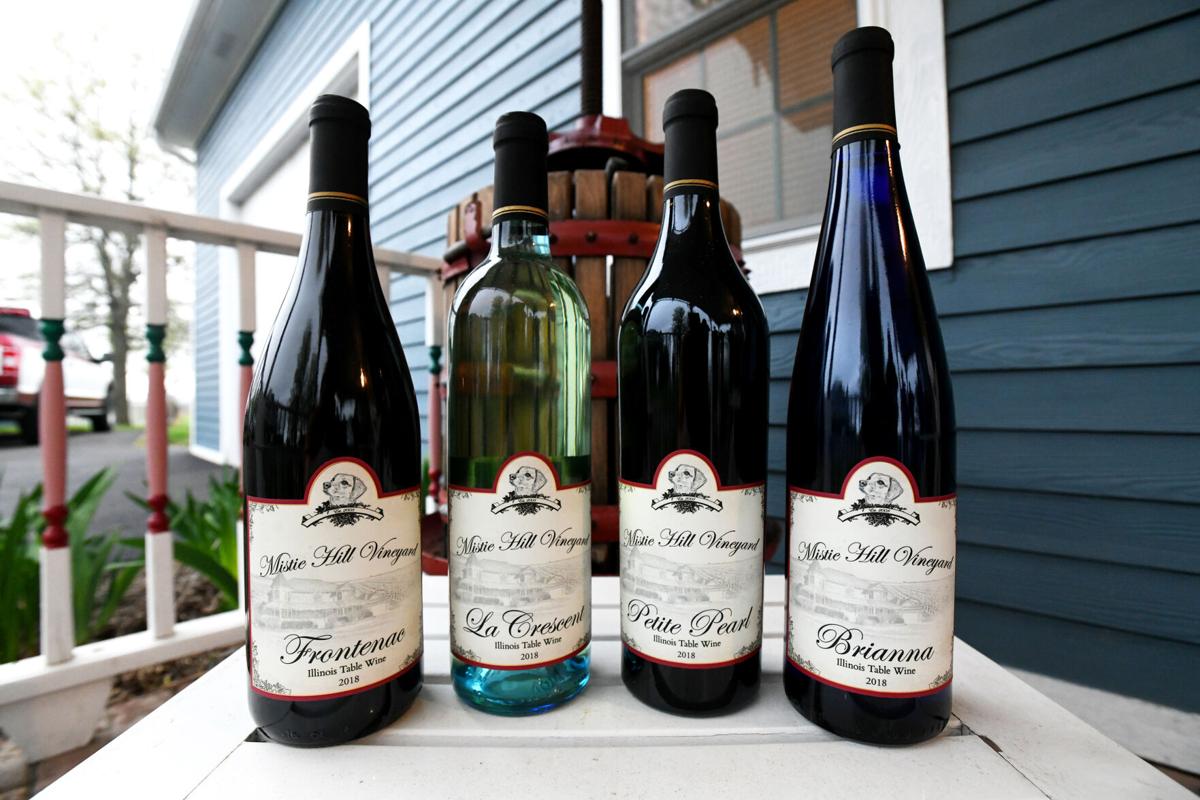 A few of the most popular Mistie Hill Vineyard wines are displayed outside the Strylowski home in Custer Park. 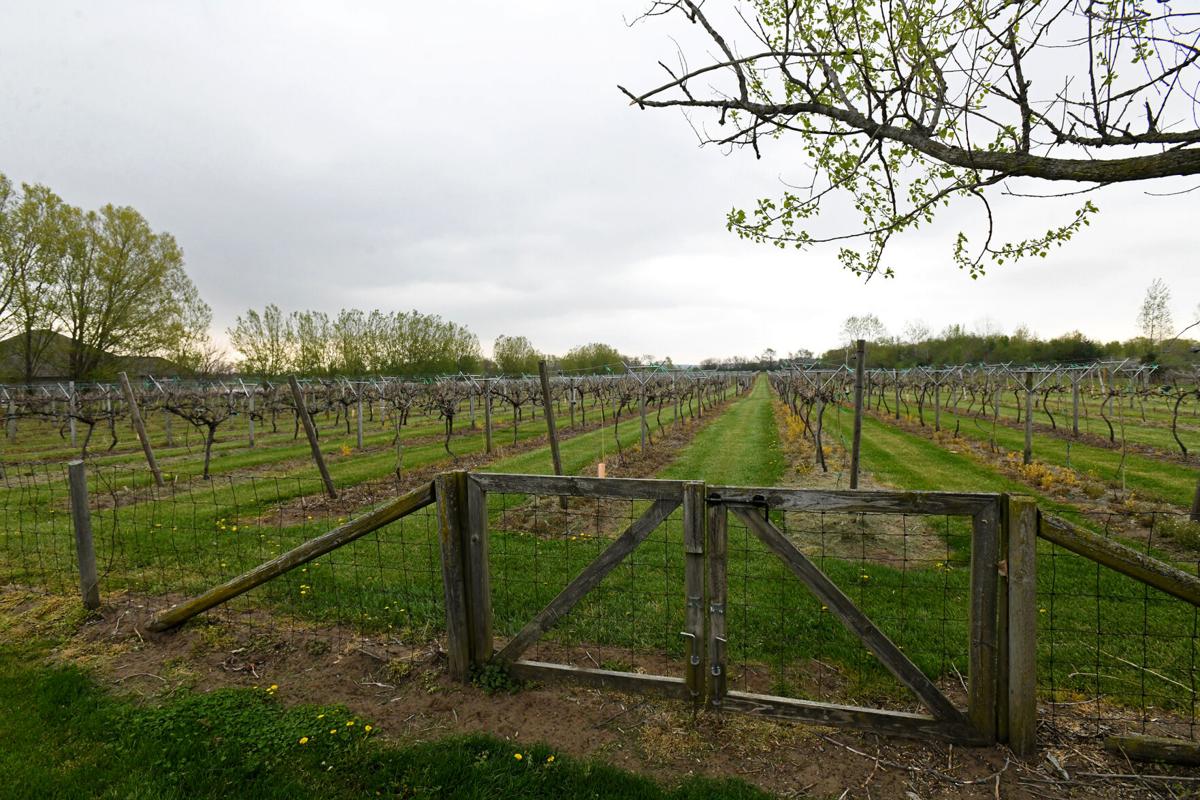 Mistie Hill Vineyard, owned by Rich and Debbie Strylowski, backs up to the couple's Custer Park home, taking up 5 acres of the 22-acre estate. What began as an experiment with a few vines from Walmart has grown to 1,100 vines with plans to expand by 800 more, Rich said. 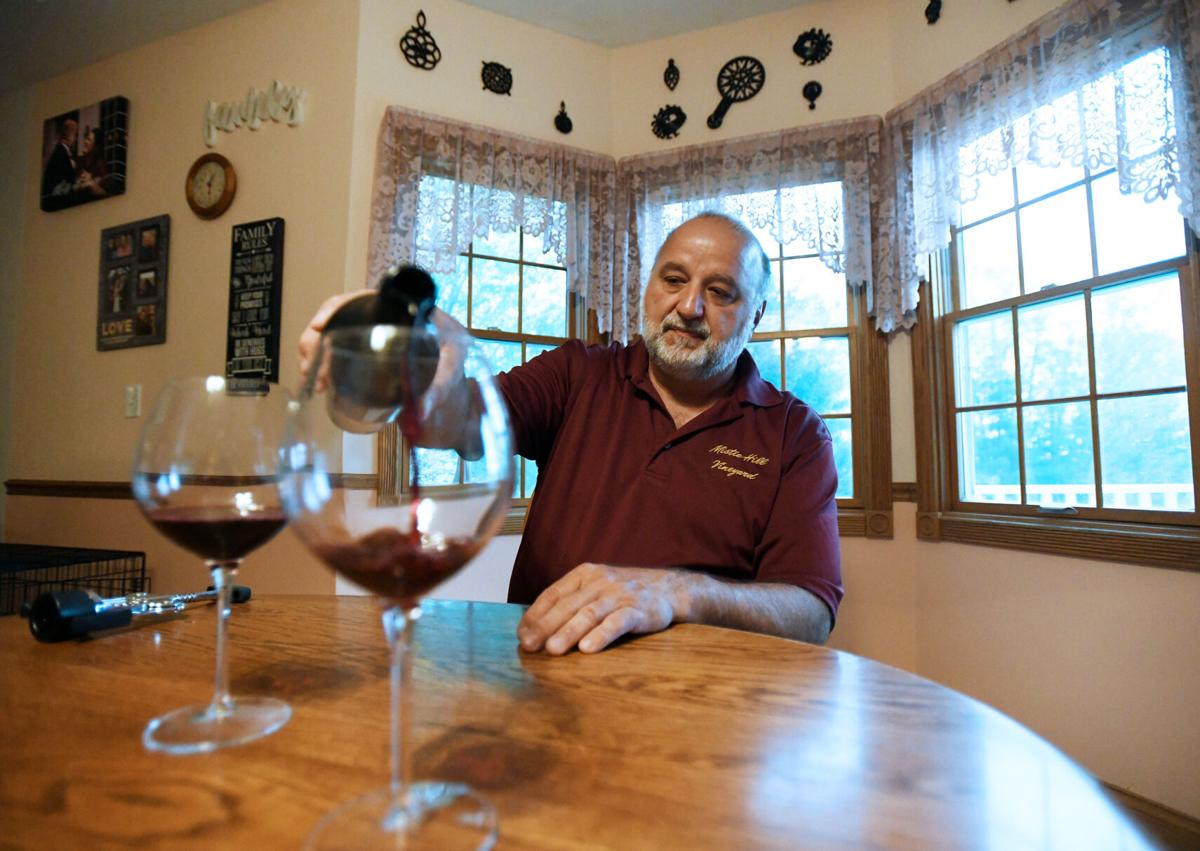 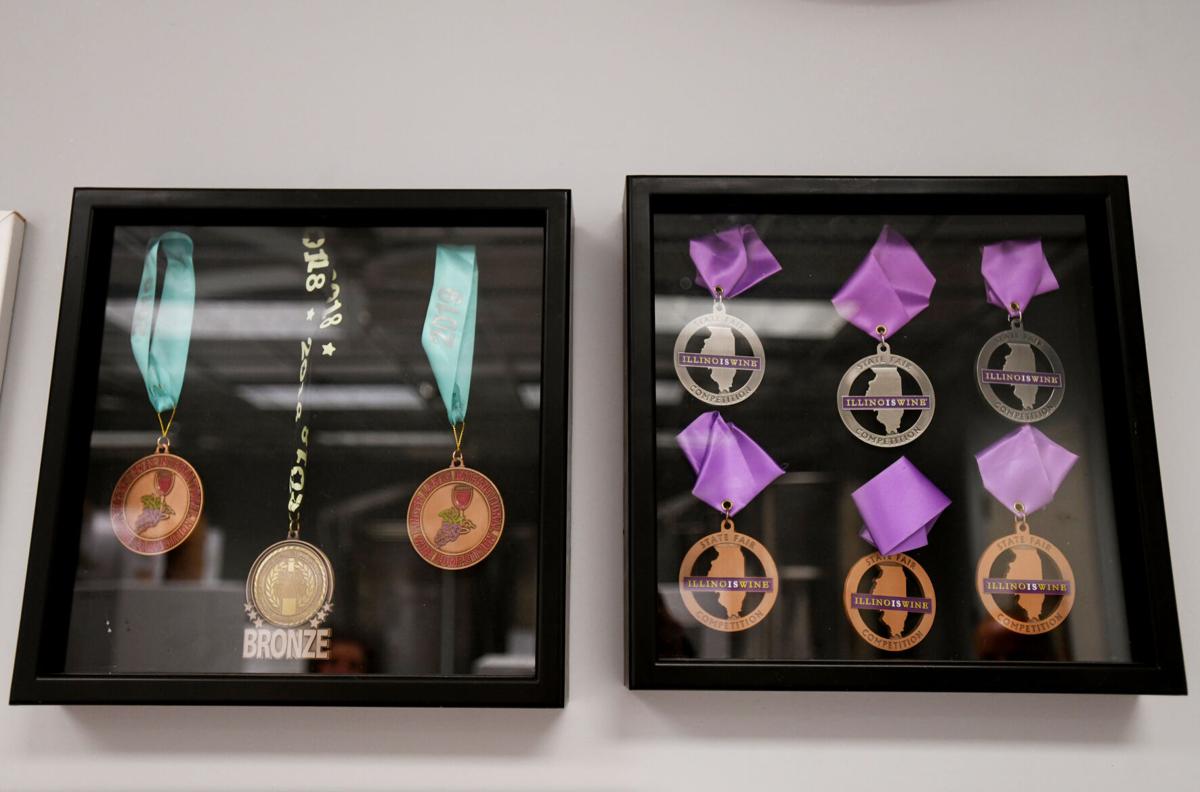 Many of the awards Mistie Hill Vineyard wines have won.

Rich and Debbie Strylowski, owners of Mistie Hill Vineyard in Custer Park, stand by the wine fermentation tanks on their property.

A few of the most popular Mistie Hill Vineyard wines are displayed outside the Strylowski home in Custer Park.

Mistie Hill Vineyard, owned by Rich and Debbie Strylowski, backs up to the couple's Custer Park home, taking up 5 acres of the 22-acre estate. What began as an experiment with a few vines from Walmart has grown to 1,100 vines with plans to expand by 800 more, Rich said.

Many of the awards Mistie Hill Vineyard wines have won.

Owned by Rich and Debbie Strylowski, the vineyard backs up to their home and takes up 5 acres of the 22-acre estate. They moved into their home in 2001 and bought the property for something completely different that didn’t pan out.

“I usually tell this story during every tasting because everyone’s always curious,” Rich said. “I found out that the soils here are perfect for growing grapes.”

The property and the soil used to be part of the Kankakee River many years ago, which made the soil ideal for not only grapes but blueberries as well. When the couple’s initial plan didn’t move forward, they decided to buy a few vines from Walmart on a whim.

“We planted them on the fence and they took off, and we thought, ‘Huh, this is something,’” recalled Rich, who said they then put in another 150 vines that also took off. “A couple years later, we had our first harvest out of it. We took a sip and were like, ‘Wow!’”

Being that the couple was already wine lovers, they decided to go ahead with the vineyard to see where it took them. The next year, they planted another 150 vines, and then a couple years later, they planted 400.

Being in Illinois presents environmental challenges, such as humidity and fungus. The wines are all French-American hybrids, giving them the ability to sustain in cold climates.

Eventually, they brought the vineyard up to 1,100 vines. They hoped to expand it by 800 more vines, but COVID changed their plans and created a stockpile of wine.

“Last year was supposed to be our breakout year because we had the most product ever,” Rich said. “We expanded our products — the year before that, we only had six wines, and we have 13 now. But then everything got shut down.”

Their Petite Pearl Table Wine won double-gold, best in class in the Illinois State Wine Competition. Each bottle of wine has a label on the back that suggests foods to pair with each wine.

On the vineyard’s logo — which is included on all of their front-facing wine labels — is the sketch of a dog. This is their former pup Mistie, who used to love lounging on the deck and looking out at the vineyard. Also on the label is a sketch of the Strylowskis’ home.

The couple said they often get requests for sweet wine, which Rich explains is “heartbreaking in the world of a wine maker because wine is not supposed to be sweet.” However, with the mindset of “the customer is always right,” they began making sweet wines, including Sweet Sami, which they said has been a hit.

Sweet Sami was named after one of their dogs. They have another dog, Bacchus, named after the Greek god of wine, and they have a new puppy named Pearl. Debbie said they enjoy the winery life, and Rich joked the wines pair well with Alpo.

Last year, they also were planning to triple their client base and expand the restaurants and banquet halls where their wines are offered, as well as stores. Customers cannot buy bottles directly from the property but can order online and have it shipped to them. This is because of licensing and zoning. They can sell wholesale with their manufacturer’s license and retail with the shipping license.

Will County had to create a special ordinance for Mistie Hill, as there is nothing existing that recognizes vineyards in the county.

“So, after about a year, we finally got our license three-and-a-half years ago, and we started being a legit commercial winery.”

Rich said at this point, it was worth all the struggle.

The Strylowskis are able to have tastings on their property and have their wines available in a number of local liquor stores, including Liquor Zone in Bourbonnais and Liquor World in Kankakee. Their wine also is served at The Library Bar in Bourbonnais, and the couple is hoping to host an event there in the near future.

“We don’t have any employees; it’s just family and some extended family who help. They all love working out there with us,” Rich said.

Now that they are both retired, the couple is able to put all of their focus on the vineyard.

“It’s been great; we love spending time with each other, and now that we’re retired, we’re more excited about it because we can actually spend more time out there,” Debbie said.

For more information on Mistie Hill Vineyard and for upcoming tasting events, go to mistiehillvineyard.com.

Husband and wife duo, Adam and Rebecca Emling, always had the dream of opening their own restaurant, but finding the right time and place was the challenge.

A TAYLOR-MADE LIFE: The wisdom of laughter

A TAYLOR-MADE LIFE: The wisdom of laughter

View reader-submitted photos of local celebrations and events in May.