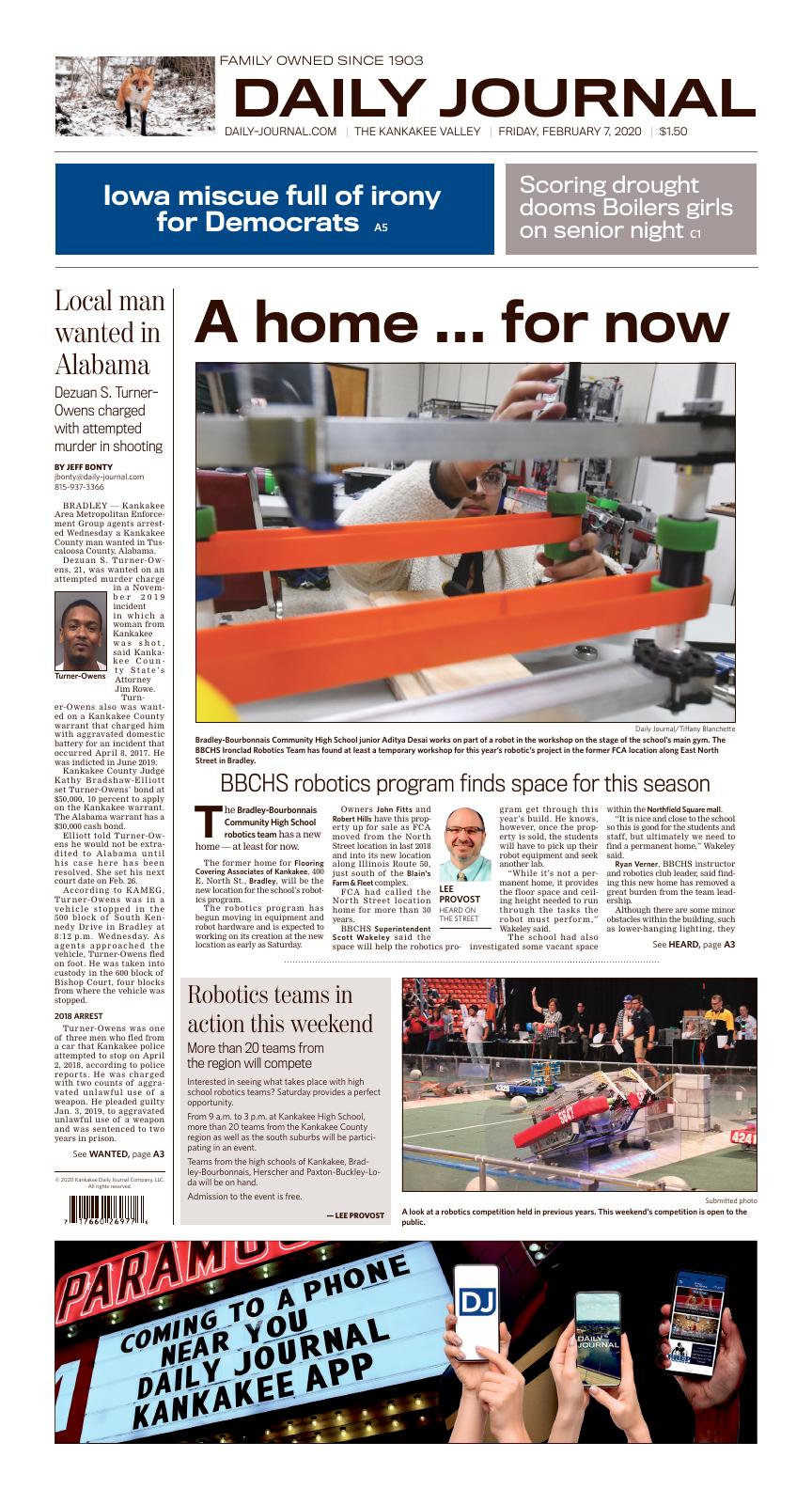 Bradley-Bourbonnais Community High School junior Aditya Desai works on part of a robot in the workshop on the stage of the school’s main gym. The BBCHS Ironclad Robotics Team has found at least a temporary workshop for this year’s robotic’s project in the former FCA location along East North Street in Bradley.

The Bradley-Bourbonnais Community High School robotics team has a new home — at least for now.

The former home for Flooring Covering Associates of Kankakee, 400 E. North St., Bradley, will be the new location for the school’s robotics program.

The robotics program has begun moving in equipment and robot hardware and is expected to work on its creation at the new location as early as Saturday.

Owners John Fitts and Robert Hills have this property up for sale as FCA moved from the North Street location in last 2018 and into its new location along Illinois Route 50, just south of the Blain’s Farm & Fleet complex.

FCA had called the North Street location home for more than 30 years.

BBCHS Superintendent Scott Wakeley said the space will help the robotics program get through this year’s build. He knows, however, once the property is sold, the students will have to pick up their robot equipment and seek another lab.

“While it’s not a permanent home, it provides the floor space and ceiling height needed to run through the tasks the robot must perform,” Wakeley said.

The school had also investigated some vacant space within the Northfield Square mall.

“It is nice and close to the school so this is good for the students and staff, but ultimately we need to find a permanent home,” Wakeley said.

Although there are some minor obstacles within the building, such as lower-hanging lighting, they are more than pleased. He noted this new home offers heating and restrooms — something the Roper location did not have.

“This will get us through this year for sure. We feel very grateful, but we are still concentrating on finding a permanent place.”

Due to the various tasks the robot must perform, the students need a location with high ceilings as its arms are extended.

The BBCHS students have been participating in the FIRST Robotics Competitions for the past five years. Like sports or theater productions, robotics is an extra curricular activity.

Serafini, who replaced Melissa Kahoun as the water company’s area manager, has been in this new role since December. Kahoun had been area manager since 2010.

A 1998 graduate of Bradley-Bourbonnais Community High School and a 2001 graduate of Illinois State University where she earned a criminal justice degree, Serafini had served for nearly eight years as executive director of administration at Olivet Nazarene University’s School of Graduate & Continuing Studies.

She was most recently employed at Capital Education as vice president of enrollment services. She also taught as an adjunct professor in Olivet’s Bachelor of Business Administration program and Bachelor of Applied Science program. She has also taught at Kankakee Community College.

Serafini earned a master’s degree in organizational leadership in 2007 and a master’s of business administration in 2010.

Kahoun remains with Aqua, but serves in the environmental controls division.

“I’m really enjoying the work and being locally based,” Serafini noted. “It’s nice to serve this entire community and the residents. It’s nice to be a part of this.”

A lifelong Kankakee County resident, Serafini will oversee the day-to-day operations of the Kankakee-based water plant and its 46 employees. In her role, she focuses on maintenance issues, customer service, the water treatment plant — basically the plant’s entire network.

One of the most well-known employees throughout his Journal career, Ahrens, 85, died on Jan. 23. A public memorial service is being held Saturday at St. Paul’s Lutheran Church in Kankakee.

During his career, Ahrens helped the newspaper win numerous national awards for the color photographs he processed.

From 9 a.m. to 3 p.m. at Kankakee High School, more than 20 teams from the Kankakee County region as well as the south suburbs will be participating in an event.

Teams from the high schools of Kankakee, Bradley-Bourbonnais, Herscher and Paxton-Buckley-Loda will be on hand.

Admission to the event is free.

Dezuan S. Turner-Owens, 21, was wanted on an attempted murder charge in a November 2019 incident in which a woman from Kankakee was shot, said Kankakee County State’s Attorney Jim Rowe.

Turner-Owens also was wanted on a Kankakee County warrant that charged him with aggravated domestic battery for an incident that occurred April 8, 2017. He was indicted in June 2019.

Kankakee County Judge Kathy Bradshaw-Elliott set Turner-Owens’ bond at $50,000, 10 percent to apply on the Kankakee warrant. The Alabama warrant has a $30,000 cash bond.

Elliott told Turner-Owens he would not be extradited to Alabama until his case here has been resolved. She set his next court date on Feb. 26.

According to KAMEG, Turner-Owens was in a vehicle stopped in the 500 block of South Kennedy Drive in Bradley at 8:12 p.m. Wednesday. As agents approached the vehicle, Turner-Owens fled on foot. He was taken into custody in the 600 block of Bishop Court, four blocks from where the vehicle was stopped.

Turner-Owens and other two men were in a vehicle that police were following after receiving a weapons tip. There was a chase that officers called off for safety concerns for residents.

A loaded AK-47 was found in the car’s trunk. A semi-automatic gun was found in a nearby park. A third gun, a Mac 11, was recovered from a roof of a nearby home after investigators watched home surveillance video from the area. That is the gun Turner-Owens admitted to having and throwing on the roof, according to court documents.

No other arrests have been made in the case. 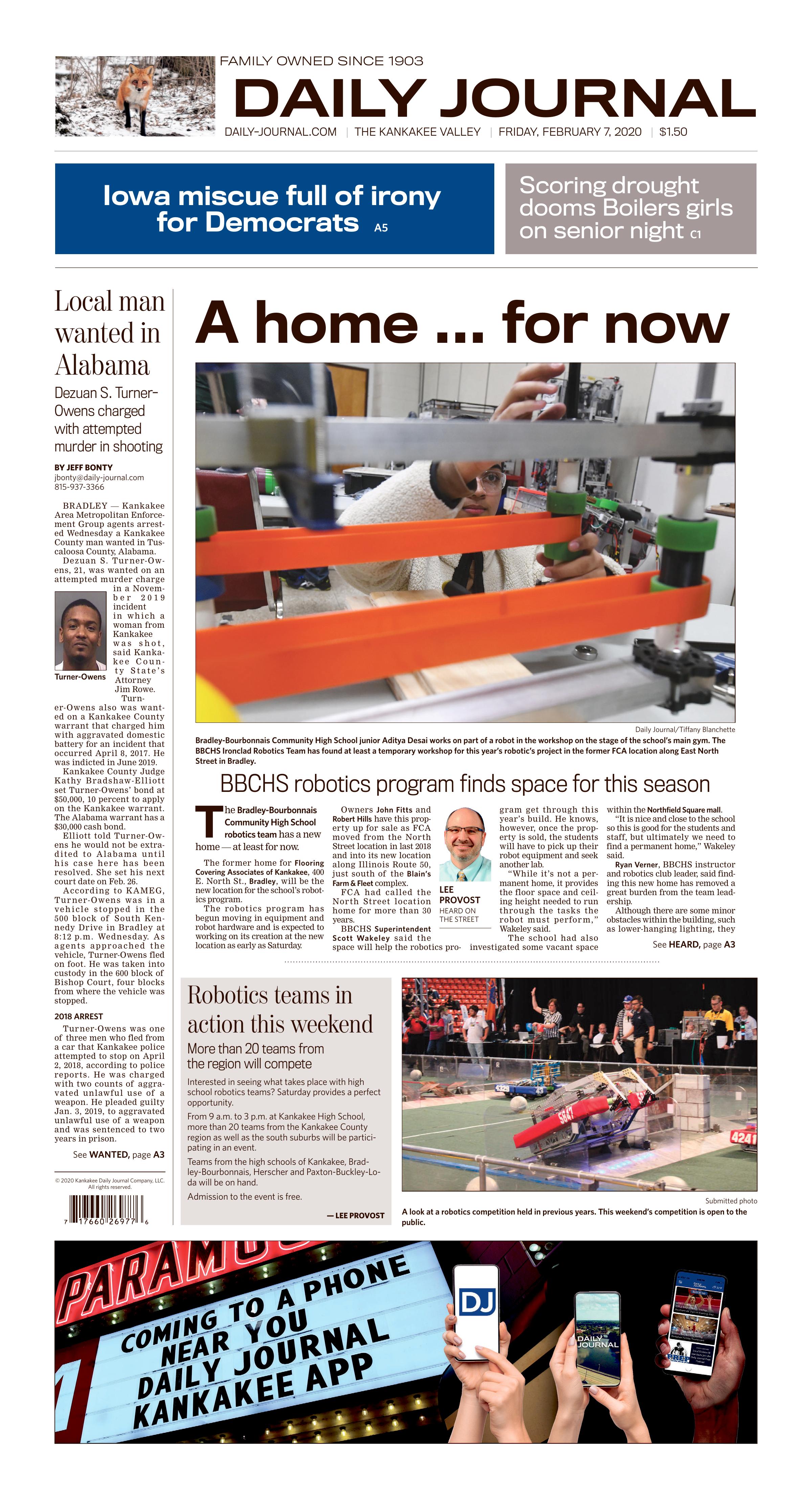