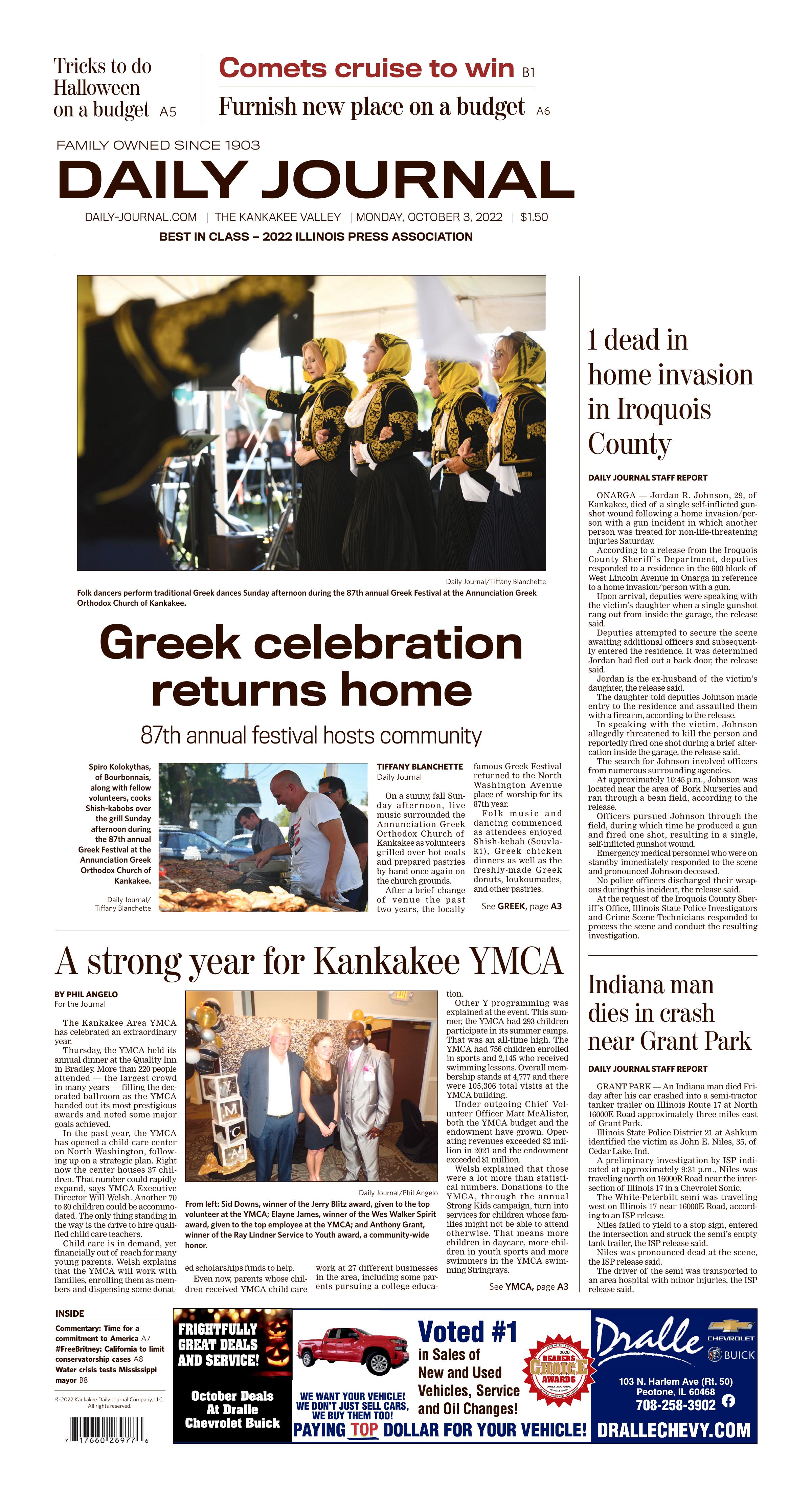 Spiro Kolokythas, of Bourbonnais, along with fellow volunteers, cooks Shish-kabobs over the grill Sunday afternoon during the 87th annual Greek Festival at the Annunciation Greek Orthodox Church of Kankakee.

Angella Cotsones-Stavrakis, left, of Orland Park, scoops up fresh-made loukoumades as Steve Case, of Kankakee, hand drops the batter Sunday afternoon during the 87th annual Greek Festival at the Annunciation Greek Orthodox Church of Kankakee. Following a machine malfunction, volunteers kept the Greek donut in production by dropping dollops of the dough by hand. “They’re made with extra love this year,” Cotsones-Stavrakis said. READ MORE.

Folk dancers perform traditional Greek dances Sunday afternoon as the crowd watches, clapping along at times, as attendees waited in long lines for the Shish-kebab (Souvlaki) and Greek chicken dinners as well as the freshly-made Greek donuts, loukoumades and other pastries. READ MORE.

Attendees visit the Greek Pastry Stand for freshly-made Greek donuts, loukoumades, and other pastries Sunday afternoon during the 87th annual Greek Festival at the Annunciation Greek Orthodox Church of Kankakee.

On a sunny, fall Sunday afternoon, live music surrounded the Annunciation Greek Orthodox Church of Kankakee as volunteers grilled over hot coals and prepared pastries by hand once again on the church grounds.

After a brief change of venue the past two years, the locally famous Greek Festival returned to the North Washington Avenue place of worship for its 87th year.

Parish pastor Father Nick Greanias facilitated neighbors greeting each other and also gave tours of the church and explanations of the Orthodox faith.

Approaching its centennial celebration in 2025, Annunciation Greek Orthodox Parish was founded and built 97 years ago at its historic location, at 296 N. Washington Ave., Kankakee, by an enterprising group of Greek immigrant business owners and their families.

Once home to hundreds of immigrant and first-generation families, Annunciation now carries on as a loving body of descendants of those pioneers. All parishioners, of Greek heritage or not, work together for several months to plan and execute the festival.

Even as the founders passed away and most of their children moved away, about 10 restaurants remain part of the local Greek community, passing on delicious know-how to the new members and keeping the festival returning year after year.

The Kankakee Area YMCA has celebrated an extraordinary year.

Thursday, the YMCA held its annual dinner at the Quality Inn in Bradley. More than 220 people attended — the largest crowd in many years — filling the decorated ballroom as the YMCA handed out its most prestigious awards and noted some major goals achieved.

In the past year, the YMCA has opened a child care center on North Washington, following up on a strategic plan. Right now the center houses 37 children. That number could rapidly expand, says YMCA Executive Director Will Welsh. Another 70 to 80 children could be accommodated. The only thing standing in the way is the drive to hire qualified child care teachers.

Child care is in demand, yet financially out of reach for many young parents. Welsh explains that the YMCA will work with families, enrolling them as members and dispensing some donated scholarships funds to help.

Even now, parents whose children received YMCA child care work at 27 different businesses in the area, including some parents pursuing a college education.

Other Y programming was explained at the event. This summer, the YMCA had 293 children participate in its summer camps. That was an all-time high. The YMCA had 756 children enrolled in sports and 2,145 who received swimming lessons. Overall membership stands at 4,777 and there were 105,306 total visits at the YMCA building.

Welsh explained that those were a lot more than statistical numbers. Donations to the YMCA, through the annual Strong Kids campaign, turn into services for children whose families might not be able to attend otherwise. That means more children in daycare, more children in youth sports and more swimmers in the YMCA swimming Stringrays.

Named for the late Ray Lindner, longtime YMCA volunteer, the award is not necessarily given to someone affiliated with the YMCA. It can be won by anyone who provides exemplary service to youth in the community.

Grant has been a coach for soccer, basketball, t-ball, hockey and flag football. Starting with his own sons, Anthony Jr. and Travis, he now coaches grandson Ashton and granddaughter Leylah. Grant has coached junior football with the Kankakee Colts for 25 years.

Grant was an accomplished athlete in high school, participating in track and football. In football, he won the Kankakee Kays Spirit Award. A Marine vet, he is active with the usher board at Morning Star Missionary Baptist Church in Kankakee.

The late Wes Walker first got him involved at the YMCA by recruiting him to sell watermelons to raise funds for the volunteer charitable Y’s Men’s Club.

Grant said it still moves him when former players see him and call him “coach.” He gets “thanks” too, and appreciates that. Grant tried to be a mentor in more ways than just sports. He said that he sees many former players who have excelled as adults.

Sid Downs of Johnson-Downs Construction received the Jerry Blitz Award, emblematic of the leading volunteer at the YMCA.

The late Jerry Blitz, Joe Giaccchino said, was a man who “lived, laughed and even died with effervescence.” Blitz’s determination was to stop talking about a project and go get it done.

Downs has been active at the YMCA for 48 years and a volunteer board member for many of those years. He’s a decades-long supporter of the Strong Kids campaign.

“When you see all the kids at summer camp, you know why you’re here,” he told the many YMCA donors and supporters.

Johnson-Downs Construction has played a lead role in many renovations at the YMCA. The YMCA, he said, is the best thing for the community.

Downs still exercises at the YMCA. His wife Diane was a volunteer soccer and basketball coach. Their children and their grandchildren constitute three generations at the YMCA.

Elayne James received the Wes Walker Spirit award, which is given to an employee for professionalism, integrity, respect, intellect and trust.

The award is named for the late Wes Walker, who died in 2016. Walker directed the Kankakee Area YMCA from 1971 to 1995. The YMCA’s Aquatic Center is named in his honor.

James, the daughter of Sandra James, is a Kankakee native who was hired at the YMCA 15 years ago by Pam Gall. James started working the front reception desk, but moved through the ranks and is now a program specialist, helping out whenever and wherever needed.

Though always in the background, she is described as indispensable.

ONARGA — Jordan R. Johnson, 29, of Kankakee, died of a single self-inflicted gunshot wound following a home invasion/person with a gun incident in which another person was treated for non-life-threatening injuries Saturday.

According to a release from the Iroquois County Sheriff’s Department, deputies responded to a residence in the 600 block of West Lincoln Avenue in Onarga in reference to a home invasion/person with a gun.

Upon arrival, deputies were speaking with the victim’s daughter when a single gunshot rang out from inside the garage, the release said.

Deputies attempted to secure the scene awaiting additional officers and subsequently entered the residence. It was determined Jordan had fled out a back door, the release said.

Jordan is the ex-husband of the victim’s daughter, the release said.

The daughter told deputies Johnson made entry to the residence and assaulted them with a firearm, according to the release.

In speaking with the victim, Johnson allegedly threatened to kill the person and reportedly fired one shot during a brief altercation inside the garage, the release said.

The search for Johnson involved officers from numerous surrounding agencies.

At approximately 10:45 p.m., Johnson was located near the area of Bork Nurseries and ran through a bean field, according to the release.

Officers pursued Johnson through the field, during which time he produced a gun and fired one shot, resulting in a single, self-inflicted gunshot wound.

Emergency medical personnel who were on standby immediately responded to the scene and pronounced Johnson deceased.

No police officers discharged their weapons during this incident, the release said.

At the request of the Iroquois County Sheriff’s Office, Illinois State Police Investigators and Crime Scene Technicians responded to process the scene and conduct the resulting investigation.

Editor's note: The story has been updated with the correct spelling of John E. Nilles' last name.

A preliminary investigation by ISP indicated at approximately 9:31 p.m., Nilles was traveling north on 16000R Road near the intersection of Illinois 17 in a Chevrolet Sonic.

The White-Peterbilt semi was traveling west on Illinois 17 near 16000E Road, according to an ISP release.

Nilles failed to yield to a stop sign, entered the intersection and struck the semi’s empty tank trailer, the ISP release said.

Nilles was pronounced dead at the scene, the ISP release said.

The driver of the semi was transported to an area hospital with minor injuries, the ISP release said.