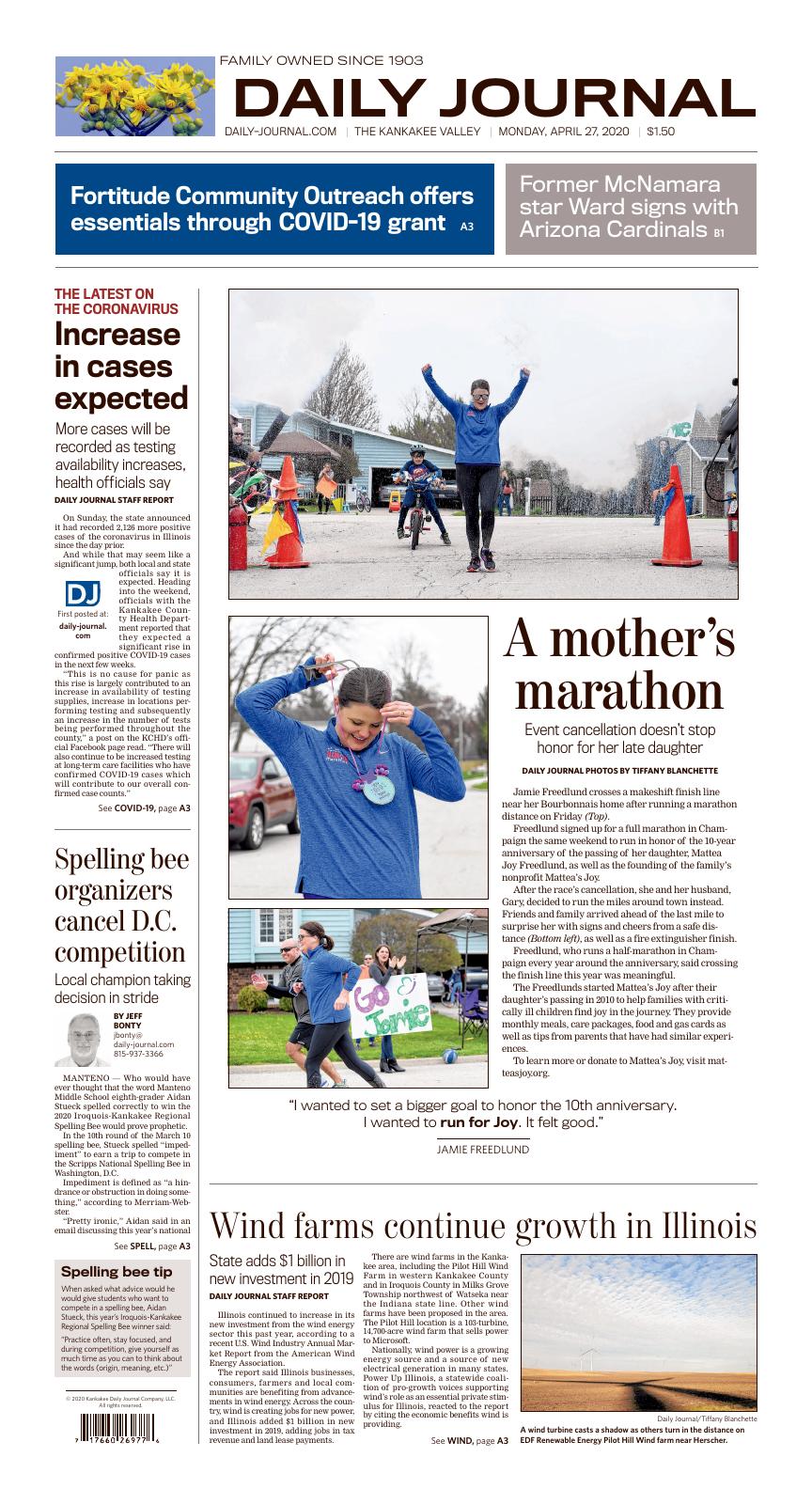 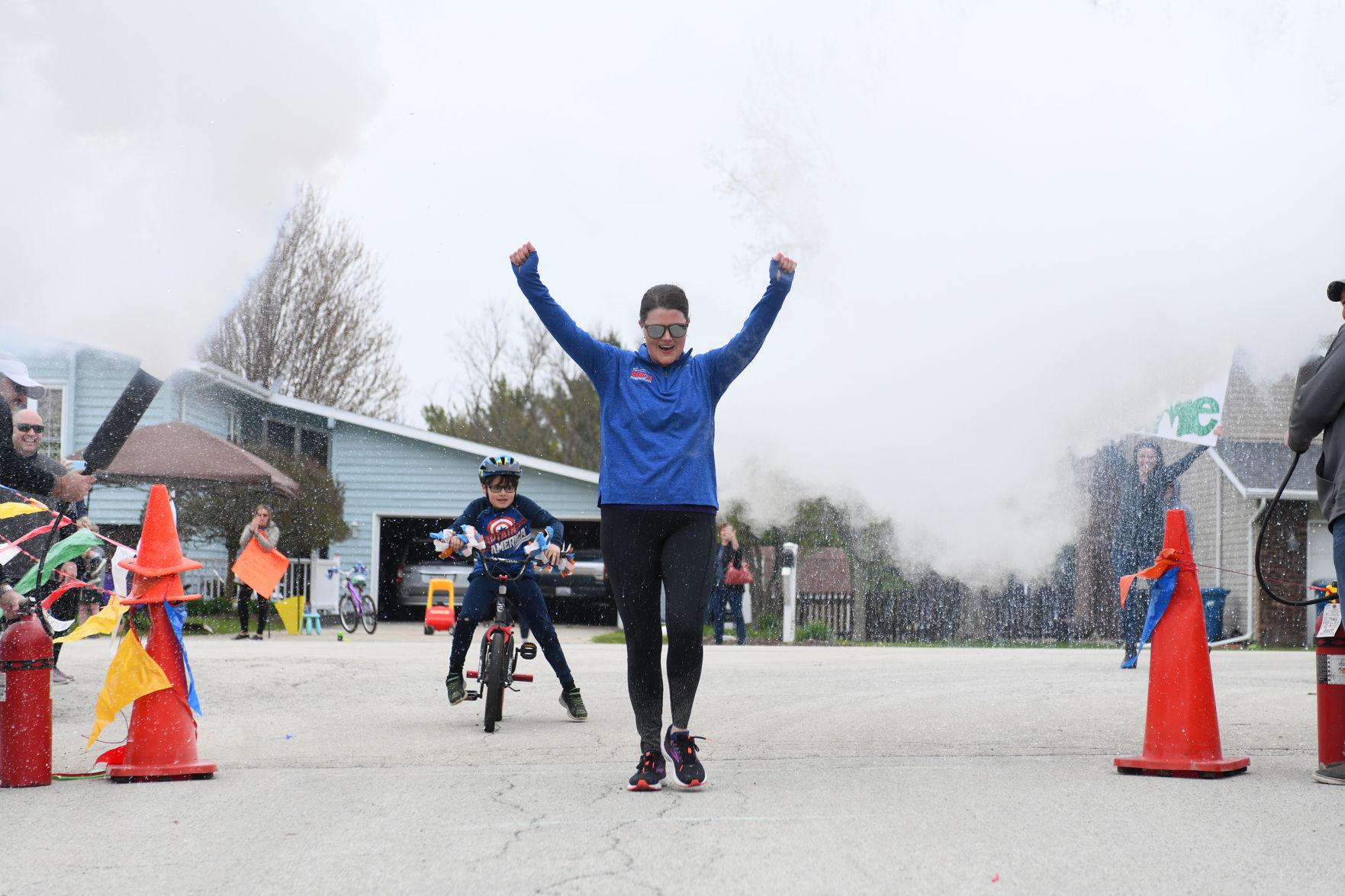 Jamie Freedlund crosses a makeshift finish line near her Bourbonnais home after running a marathon distance on Friday. Freedlund signed up for a full marathon in Champaign the same weekend to run in honor of the 10-year anniversary of the passing of her daughter, Mattea Joy Freedlund, as well as the founding of the family’s non-profit Mattea’s Joy. After the race’s cancellation, she and her husband, Gary, decided to run the miles around town instead. Friends and family arrived ahead of the last mile to surprise her with signs and cheers from a safe distance, as well as a fire extinguisher finish. Freedlund, who runs a half-marathon in Champaign every year around the anniversary, said crossing the finish line this year was meaningful. The Freedlunds started Mattea’s Joy after their daughter’s passing in 2010 to help families with critically ill children find joy in the journey. They provide monthly meals, care packages, food and gas cards as well as tips from parents that have had similar experiences. To learn more or donate to Mattea’s Joy, visit matteasjoy.org. 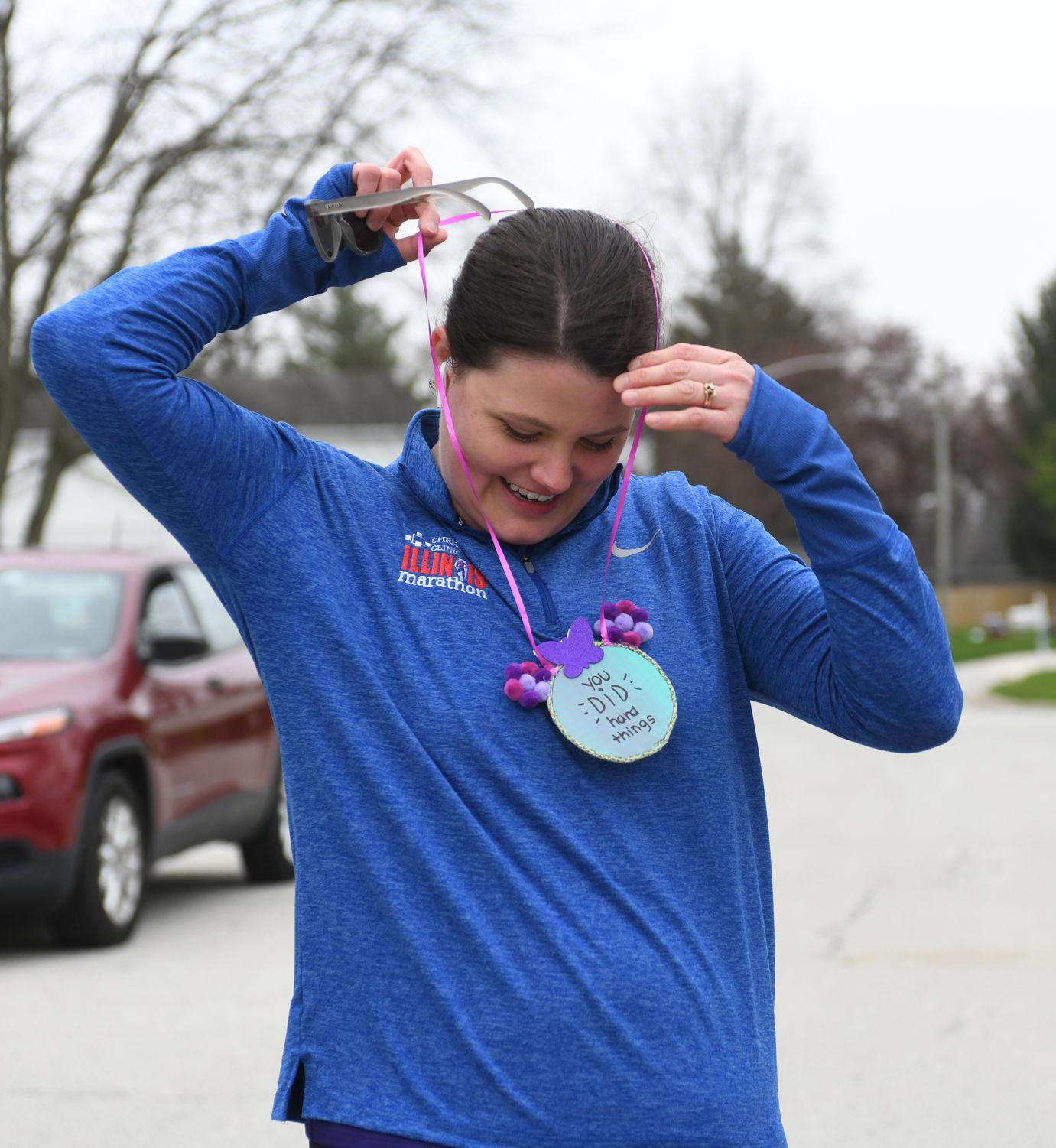 Jamie Freedlund, of Bourbonnais, puts on a medal, homemade by her 13-year-old daughter Reese, after running a marathon distance on Friday in honor of her late daughter, Mattea. 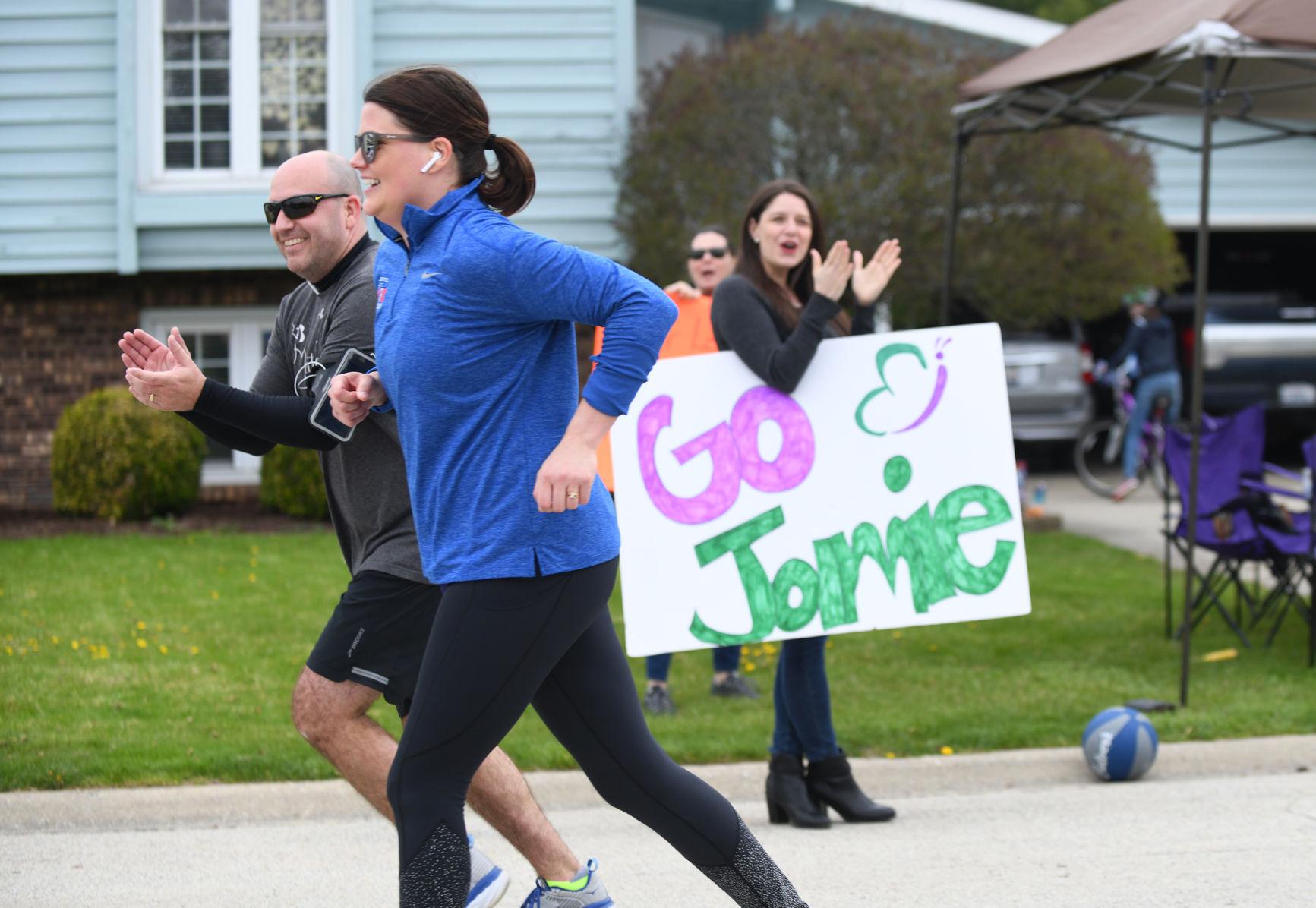 Friends and family cheer on Jamie Freedlund, of Bourbonnais, as runs the final mile of a marathon distance with her husband, Gary, left, on Friday in honor of the 10-year anniversary of the passing of their daughter, Mattea.

A wind turbine casts a shadow as others turn in the distance on EDF Renewable Energy Pilot Hill Wind farm near Herscher.

Illinois continued to increase in its new investment from the wind energy sector this past year, according to a recent U.S. Wind Industry Annual Market Report from the American Wind Energy Association.

The report said Illinois businesses, consumers, farmers and local communities are benefiting from advancements in wind energy. Across the country, wind is creating jobs for new power, and Illinois added $1 billion in new investment in 2019, adding jobs in tax revenue and land lease payments.

There are wind farms in the Kankakee area, including the Pilot Hill Wind Farm in western Kankakee County and in Iroquois County in Milks Grove Township northwest of Watseka near the Indiana state line. Other wind farms have been proposed in the area. The Pilot Hill location is a 103-turbine, 14,700-acre wind farm that sells power to Microsoft.

Nationally, wind power is a growing energy source and a source of new electrical generation in many states. Power Up Illinois, a statewide coalition of pro-growth voices supporting wind’s role as an essential private stimulus for Illinois, reacted to the report by citing the economic benefits wind is providing.

Wind does more than power Illinois’ communities and businesses, the organization says. The ripple effects of surging wind investment are providing a needed boost to Illinois’ economy and local governments, according to Power Up Illinois. In addition to wind investment in Illinois increasing by $1 billion last year to $10.9 billion, wind energy workforce levels grew to 8,000-9,000 jobs supported by the wind supply chain, making Illinois third in the country for wind employment.

State and local tax revenue from wind projects grew 22% in 2019, or $9 million, to $49 million annually. And annual land lease payments more than doubled to $37 million.

“It offers the opportunity for folks who don’t even really understand the sustainability of renewable energy to come out and put it into practice,” said Paul Carlson, KCC’s associate dean of business and technology, at ATEC’s opening last year.

On Sunday, the state announced it had recorded 2,126 more positive cases of the coronavirus in Illinois since the day prior.

And while that may seem like a significant jump, both local and state officials say it is expected. Heading into the weekend, officials with the Kankakee County Health Department reported that they expected a significant rise in confirmed positive COVID-19 cases in the next few weeks.

“This is no cause for panic as this rise is largely contributed to an increase in availability of testing supplies, increase in locations performing testing and subsequently an increase in the number of tests being performed throughout the county,” a post on the KCHD’s official Facebook page read. “There will also continue to be increased testing at long-term care facilities who have confirmed COVID-19 cases which will contribute to our overall confirmed case counts.”

With the state reporting Sunday that 13,335 test results were recorded in the last 24 hours, the local health department it won’t yet be able to report testing numbers “due to the complex nature of multiple facilities conducting, processing and reporting testing which makes reporting timely and accurate statistics difficult.”

Gov. JB Pritzker has said that meeting the 10,000 per-day threshold gives medical professionals and state officials a more accurate understanding of COVID-19’s impact on communities across Illinois. That threshold was reached Sunday for the third day in a row, state officials say.

The governor said at his daily briefing in Chicago Sunday that any resident who has COVID-19-related symptoms, as well as first responders who are in any state of health, can receive a test.

The Illinois Department of Public Health announced 59 more lives lost from the virus since Saturday as residents died in six counties. That brings Illinois’ total COVID-19 impact to 43,903 confirmed cases in 96 of 102 counties and 1,933 total deaths. Of the 4,595 COVID-19 patients hospitalized in the state as of midnight Sunday, Pritzker said, 1,267 are in an intensive care unit, with 772 on ventilators.

In Kankakee County, the last coronavirus-related death was reported on April 23. The county’s death count has stood at 26 since.

Pritzker also said at his Sunday briefing that social distancing remains an important prevention strategy. By standing in large groups not wearing masks, “you’re literally putting everyone around you in danger,” the governor said.

In response to reports of a large party in the Chicago area, he added those who refuse to shelter at home “have violated not only the intention of the order that we’ve put out, but also they’ve violated the trust of their friends and family.”

Local law enforcement has the authority to enforce the orders. Pritzker said he asked police departments to first remind residents who are not social distancing or wearing a mask that they must do so. If residents refuse, officers can arrest them for reckless conduct.

When questioned about schooling in the state, Pritzker said school administrators and teachers should spend time this summer preparing for in-person education and improving their e-learning curriculum.

“It is still unclear what things will look like over the summer and the fall,” he said. “But without knowing the answer, e-learning is an important thing for us to develop either way.”

Pritzker said the pandemic highlighted how many districts were unprepared to administer e-learning. In response, the State Board of Education has financial resources available to assist them in bulking up their programs.

“I think that in the future, we’ll be using e-learning more and more, even in the absence of a pandemic,” the governor added.

Rebecca Anzel of Capitol News Illinois contributed to this report.

Manteno Middle School’s Aidan Stueck celebrates as he correctly spelled “impediment’’ in the 10th round to win the 2020 Iroquois-Kankakee Regional Spelling Bee in March.

MANTENO — Who would have ever thought that the word Manteno Middle School eighth-grader Aidan Stueck spelled correctly to win the 2020 Iroquois-Kankakee Regional Spelling Bee would prove prophetic.

In the 10th round of the March 10 spelling bee, Stueck spelled “impediment” to earn a trip to compete in the Scripps National Spelling Bee in Washington, D.C.

Impediment is defined as “a hindrance or obstruction in doing something,” according to Merriam-Webster.

“Pretty ironic,” Aidan said in an email discussing this year’s national contest being canceled. “I was disappointed; I was really looking forward to the competition and seeing Washington, D.C.”

Aidan had been preparing for the bee as well as competing in this year’s Kan-Will Spelling Bee, which also was canceled.

This year’s national competition was scheduled for May 26-28. The Daily Journal and AMITA Health St. Mary’s Hospital, the sponsors of the local Bee, sponsor the all-expenses-paid trip. This is not the first time the bee has been canceled since its inception is 1925. The bee was not held from 1943-45 because of World War II.

“I was sad,” Aidan’s mother Melanie Senerchia said. “We were really excited for Aidan, and looking forward to the experience. With the shelter-in-place mandates, we’ve had a lot of disappointments (canceled band concerts, eighth-grade promotion ceremony, etc.) and we were holding out hope this would still go on.”

Aidan’s father is Alex Pod of Chicago and his stepfather is John Senerchia.

Scripps had postponed the bee in March and was looking to stage it later in the year. Then, on April 21, organizers announced their decision to cancel.

“The bee has determined there is no clear path to safely set a new date in 2020,” Scripps said in a statement, noting “uncertainty around when public gatherings will be possible or advisable.”

The bee will return next year, Scripps officials said. Scripps will not change eligibility requirements for the next bee, which is scheduled for June 1-3, 2021.

The bee’s executive director, Paige Kimble, said they considered the idea of a virtual bee. She said they concluded logistically it would be difficult and it would not be in the true spirit of the competition, according to an Associated Press story.

There is still a chance Aidan may get to compete at the national level.

SpellPundit is a company that provides online spelling and vocabulary bee preparation materials.

It plans on conducting a virtual contest on the same dates set for this year’s Scripps bee. Several top spellers from around the U.S. are planning to compete.

“I am looking into it,” Aidan said. “It’s an interesting format for this kind of contest.”

“I know he’s disappointed about it, but he’s trying hard to not let it get to him,” she said. “He did say, ‘I still got front page of the paper, no one else in the family can say that!’ so there’s at least that small victory.”

When asked what advice would he would give students who want to compete in a spelling bee, Aidan Stueck, this year's Iroquois-Kankakee Regional Spelling Bee winner said:

"Practice often, stay focused, and during competition give yourself as much time as you can to think about the words (origin, meaning, etc.)" 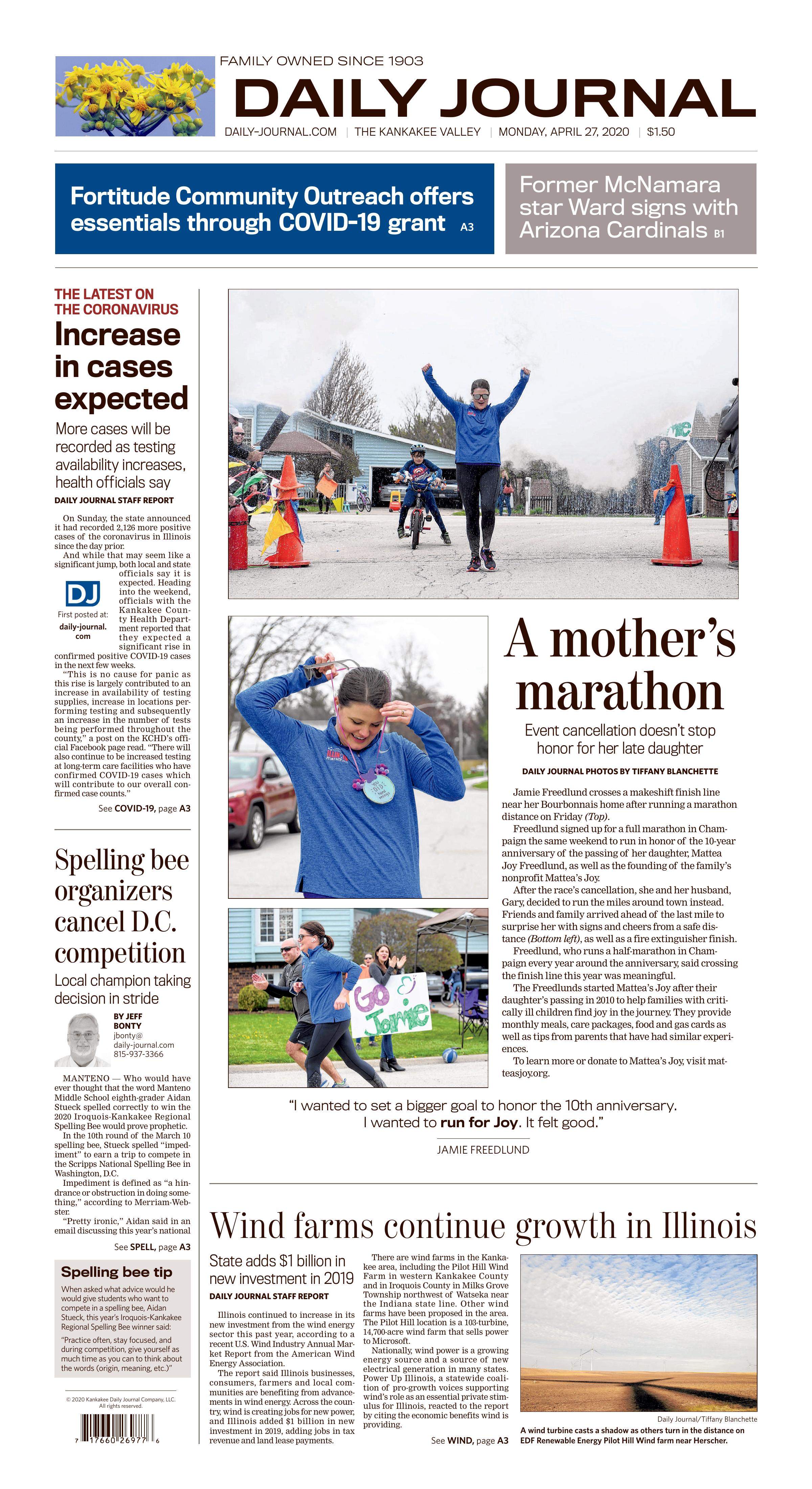