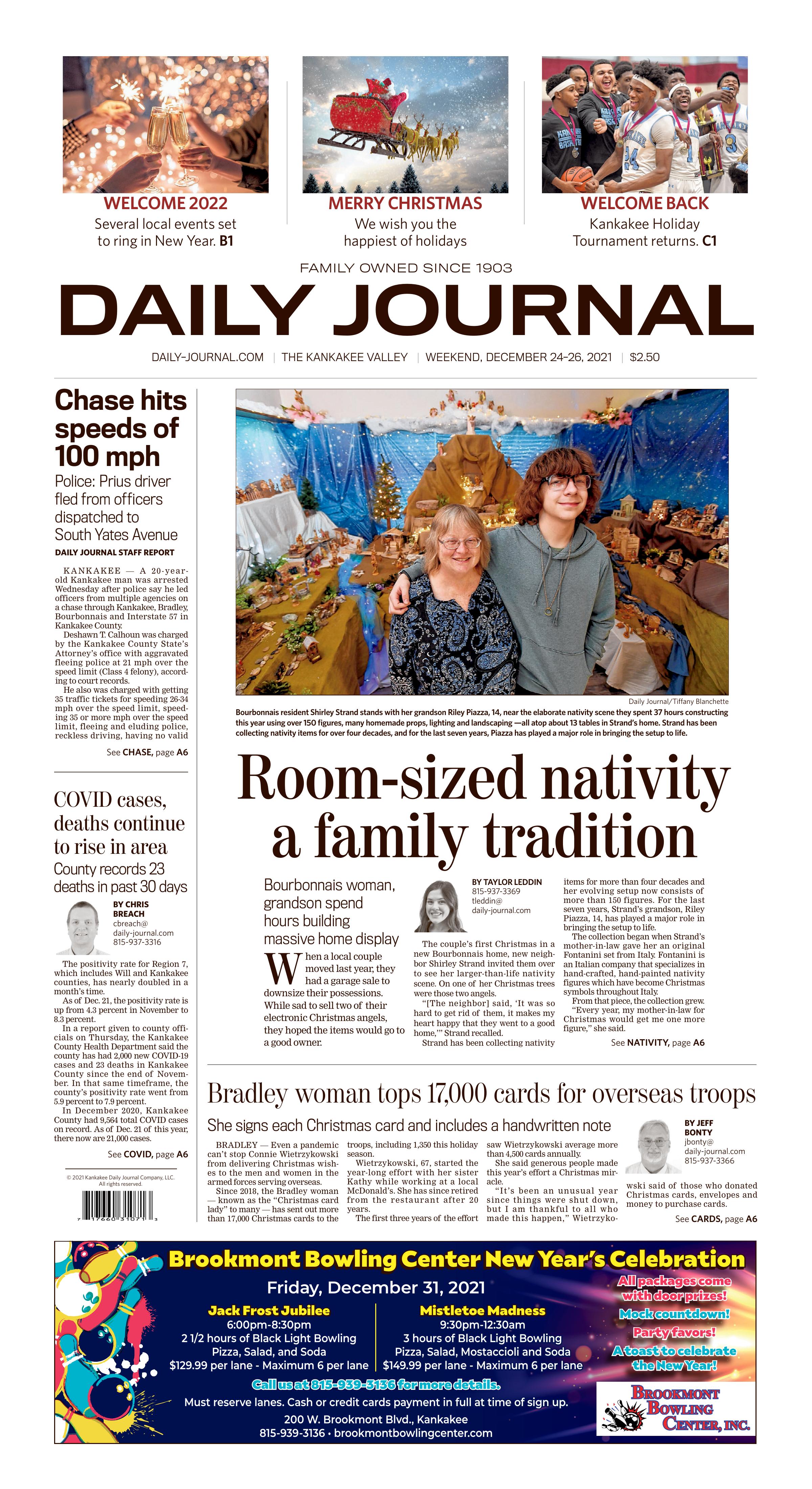 Bourbonnais resident Shirley Strand stands with her grandson Riley Piazza, 14, near the elaborate nativity scene they spent 37 hours constructing this year using over 150 figures, many homemade props, lighting and landscaping —all atop about 13 tables in Strand’s home. Strand has been collecting nativity items for over four decades, and for the last seven years, Piazza has played a major role in bringing the setup to life. READ MORE.

The Star of Bethlehem hangs above the cave where the nativity scene displays the figures representing the infant Jesus, his mother, Mary, and her husband, Joseph.

A river, portrayed by blue tulle fabric and string lights, runs through the nativity scene surrounded by figures and homemade structures. Other water features included running fountains and blue-colored ponds made with Elmer's glue.

One of Shirley Strand’s most meaningful figures is this one of a grandmother holding a baby, which was given to her by her mother-in-law when Strand became a grandma.

The elaborate nativity display constructed by Bourbonnais resident Shirley Strand and her 14-year-old grandson, Riley Piazza. The 37 hours they spent creating this year's display does not include planning or teardown after the holidays. READ MORE.

When a local couple moved last year, they had a garage sale to downsize their possessions. While sad to sell two of their electronic Christmas angels, they hoped the items would go to a good owner.

The couple’s first Christmas in a new Bourbonnais home, new neighbor Shirley Strand invited them over to see her larger-than-life nativity scene. On one of her Christmas trees were those two angels.

“[The neighbor] said, ‘It was so hard to get rid of them, it makes my heart happy that they went to a good home,’” Strand recalled.

Strand has been collecting nativity items for more than four decades and her evolving setup now consists of more than 150 figures. For the last seven years, Strand’s grandson, Riley Piazza, 14, has played a major role in bringing the setup to life.

The collection began when Strand’s mother-in-law gave her an original Fontanini set from Italy. Fontanini is an Italian company that specializes in hand-crafted, hand-painted nativity figures which have become Christmas symbols throughout Italy.

From that piece, the collection grew.

“Every year, my mother-in-law for Christmas would get me one more figure,” she said.

The display really took off several years back when the Strands moved to their current home — and discovered eBay. The set-up has more than doubled in size since 2020 due to the items she has found on the e-commerce site — a few of which are still in transit.

“She went on a shopping spree [this year] and it grew to about 13 tables,” Piazza said of the room-sized display.

With a laugh, Strand added, “As a matter of fact, about three weeks before Christmas, Riley cut me off [from eBay].”

Anything not found on eBay or given as a gift is purchased through garage sales.

“We hunt for treasures,” Strand said of seeking items.

While they put a limit on their spending, they appraised the collection at around $4,000.

Because last year’s display wasn’t very structurally sound, they spent all summer planning how they would build a better foundation. With the help of another of Strand’s grandchildren, Zakary Strand, construction of that foundation began in October.

It moves to new locations in the home every year. This year, Strand’s husband offered up his “man cave,” which is typically used to display his collection of car models.

“Every year, our thing is that we don’t repeat, we change it,” Shirley Strand said.

They invite neighbors, teachers and friends to come by and check out the display. Many share ideas for future scenes, and the grandma-and-grandson duo of Shirley and Riley are already brainstorming for next year’s display. One thing they want to do is incorporate more live greenery.

When discussing the amount of time spent this year on setting up the entire display, Piazza said they logged 37 hours. He knows the exact amount because they began keeping a ledger.

Strand said that a lot of additional time is spent getting “real estate” — or the foundation of the display — in order. She noted that it also takes quite a while to deconstruct. The display is typically left up until mid-January.

When they take it down this year, they are going to label each piece with the proper Fontanini name as they’ve started a log for each item in their stable. That way, when they go shopping on eBay, they won’t double up on items.

The figure that has the most meaning to Strand is one of a grandmother holding a baby, which was given to her by her mother-in-law when Strand became a grandma.

Strand and Piazza also have “hidden” figures of a cat and two Boston terriers to remember pets — and pet owners — who are no longer with them. All of these items are part of the center display.

To the left of the center display is Bethlehem and to the right is Jerusalem. Many of the buildings are homemade, including a drawbridge made out of popsicle sticks.

Additionally, three Christmas trees line the entrance to the display and all are decorated with the theme of nativity and angels. This is where the new neighbors’ angels are displayed.

Because Fontanini names all of its pieces, Strand tries to buy any that share names with her five children and 10 grandchildren. The nativity collection is a major part of the family’s Christmas traditions.

“To me, the emphasis [of Christmas] was always Jesus’ birthday,” Strand said. “So, when the kids were little, we always had a birthday cake, we always lit a candle and sang ‘Happy Birthday’ to baby Jesus.”

While the Strands haven’t done the birthday cake since the kids were at home, Shirley has no plans of stopping the nativity tradition as it has allowed plenty of bonding time for her and Piazza.

Piazza said his favorite part of the process is “being able to spend time with [grandma]. We have the same taste in music and we listen to the older stuff and then we play cards after.”

Strand shared the sentiment, saying, “My favorite part is just the interaction between us. The time that we get to spend together is priceless.”

BRADLEY — Even a pandemic can’t stop Connie Wietrzykowski from delivering Christmas wishes to the men and women in the armed forces serving overseas.

Since 2018, the Bradley woman — known as the “Christmas card lady” to many — has sent out more than 17,000 Christmas cards to the troops, including 1,350 this holiday season.

Wietrzykowski, 67, started the year-long effort with her sister Kathy while working at a local McDonald’s. She has since retired from the restaurant after 20 years.

She said generous people made this year’s effort a Christmas miracle.

“It’s been an unusual year since things were shut down, but I am thankful to all who made this happen,” Wietrzykowski said of those who donated Christmas cards, envelopes and money to purchase cards.

Signed “Connie and family,” she writes a personal message in each card. Her husband of more than 30 years, Vince, helps her pack the finished cards in bundles.

Vince served in the National Guard for 20 years.

After preparing the cards, she takes them to the American Legion in Beecher which sends the cards overseas. To reach the troops in time for the holidays, the cards must be delivered to Amvets before Halloween.

While she has taken time off before starting work on Christmas 2022’s batch, Wietrzykowski said she has come up with the message she will write in those cards: “Here we are, another year has passed. All my family is thankful for joy on Earth. Plus, thank you very kindly for all you do in keeping us safe and out of harm’s way.”

Wietrzykowski said anyone wanting to donate cards for military personnel can drop them off at her home at 371 N. Wabash Ave. in Bradley.

KANKAKEE — A 20-year-old Kankakee man was arrested Wednesday after police say he led officers from multiple agencies on a chase through Kankakee, Bradley, Bourbonnais and Interstate 57 in Kankakee County.

Deshawn T. Calhoun was charged by the Kankakee County State’s Attorney’s office with aggravated fleeing police at 21 mph over the speed limit (Class 4 felony), according to court records.

He also was charged with getting 35 traffic tickets for speeding 26-34 mph over the speed limit, speeding 35 or more mph over the speed limit, fleeing and eluding police, reckless driving, having no valid driver’s license, disregarding a traffic signal, disregarding a stop sign, conducting an improper turn at an intersection, changing lanes without signal and headlight violation.

According to Kankakee Police Department reports, Kankakee police were dispatched to the 600 block of South Yates Avenue at 8:40 p.m. Monday for an unknown incident.

As officers approached the area, a 2006 Toyota Prius left the area at a high rate of speed, police said.

Officers were able to identify Calhoun as the driver, according to reports.

Speeds during the chase reached between 80 and 100 mph before police terminated the chase, according to police.

The positivity rate for Region 7, which includes Will and Kankakee counties, has nearly doubled in a month’s time.

In a report given to county officials on Thursday, the Kankakee County Health Department said the county has had 2,000 new COVID-19 cases and 23 deaths in Kankakee County since the end of November. In that same timeframe, the county’s positivity rate went from 5.9 percent to 7.9 percent.

Since June 2021, as vaccination efforts were in full swing, the county recorded 70-plus deaths. Those were mostly among unvaccinated individuals, according to data from the Illinois Department of Public Health and the Centers for Disease Control and Prevention.

There are 51,100 Kankakee County residents who are fully vaccinated. The county’s vaccination rate stands at 46.58 percent. That’s up from 44.56 percent in November. That number is well behind both state and national vaccination rates.

The state of Illinois stands at 64 percent while neighboring Indiana is at 51.8 percent. The national vaccination rate is 61.7 percent.