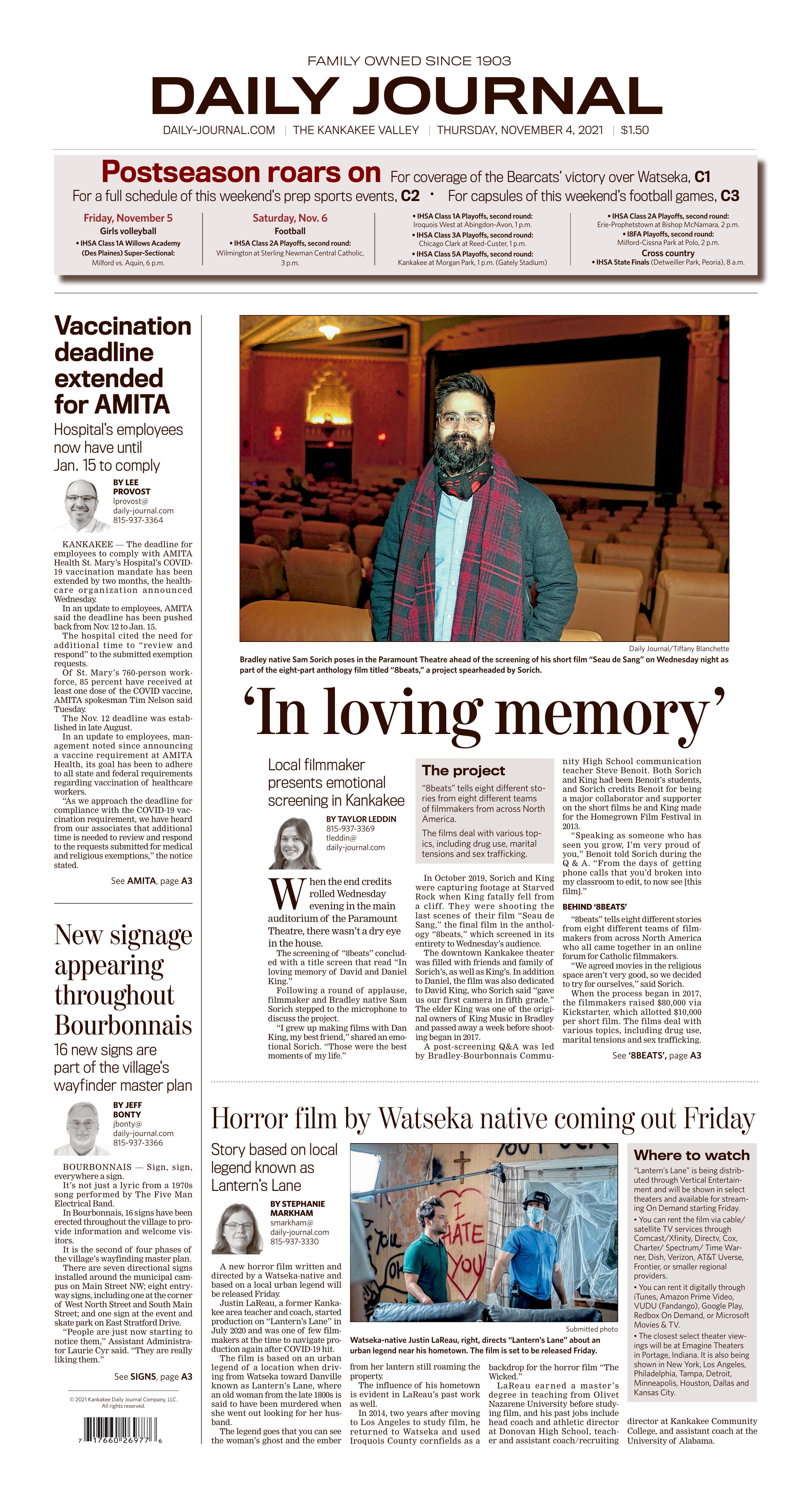 Bradley native Sam Sorich poses in the Paramount Theatre ahead of the screening of his short film “Seau de Sang” on Wednesday night as part of the eight-part anthology film titled “8beats,” a project spearheaded by Sorich.

KANKAKEE — When the end credits rolled Wednesday evening in the main auditorium of the Paramount Theatre, there wasn’t a dry eye in the house.

The screening of “8beats” concluded with a title screen that read “In loving memory of David and Daniel King.”

Following a round of applause, filmmaker and Bradley native Sam Sorich stepped to the microphone to discuss the project.

“I grew up making films with Dan King, my best friend,” shared an emotional Sorich. “Those were the best moments of my life.”

In October 2019, Sorich and King were capturing footage at Starved Rock when King fatally fell from a cliff. They were shooting the last scenes of their film “Seau de Sang,” the final film in the anthology “8beats,” which screened in its entirety to Wednesday’s audience.

The downtown Kankakee theater was filled with friends and family of Sorich’s, as well as King’s. In addition to Daniel, the film was also dedicated to David King, who Sorich said “gave us our first camera in fifth grade.” The elder King was one of the original owners of King Music in Bradley and passed away a week before shooting began in 2017.

A post-screening Q&A was led by former Bradley-Bourbonnais Community High School communication teacher Steve Benoit. Both Sorich and King had been Benoit’s students, and Sorich credits Benoit for being a major collaborator and supporter on the short films he and King made for the Homegrown Film Festival in 2013. Benoit now teaches at Kankakee High School.

“Speaking as someone who has seen you grow, I’m very proud of you,” Benoit told Sorich during the Q & A. “From the days of getting phone calls that you’d broken into my classroom to edit, to now see [this film].”

“We agreed movies in the religious space aren’t very good, so we decided to try for ourselves,” said Sorich.

When the process began in 2017, the filmmakers raised $80,000 via Kickstarter, which allotted $10,000 per short film. The films deal with various topics, including drug use, marital tensions and sex trafficking.

These eight films were Volume One of what Sorich hopes to be a continuing series. He said that the goal is to continue every year and include filmmakers from around the world.

The title “8beats” comes from the eight blessings, or “beatitudes,” listed by Jesus in the Sermon on the Mount. They present a counterintuitive approach to leading a meaningful life.

“Screening ‘8beats’ at the Paramount is a homecoming of sorts as both Danny and I had learned to love films and filmmaking in this theater at each other’s side,” shared Sorich, who was reminiscing with friends prior to the screening about having seen iconic films such as “Lord of the Rings” at Paramount.

“It’s challenging to make and distribute a film, but I am thankful for all of the support we got,” he said.

Sorich currently lives in Chicago with his wife, Ellie, and runs Glass Darkly Films, a Chicago-based film production company engaging the Catholic intellectual and artistic tradition through the cinematic arts.

For more information about “8beats” and to view the films on demand, go to 8beatsmovie.com.

The films deal with various topics, including drug use, marital tensions and sex trafficking.

Watseka-native Justin LaReau, right, directs “Lantern’s Lane” about an urban legend near his hometown. The film is set to be released Friday.

A new horror film written and directed by a Watseka-native and based on a local urban legend will be released Friday.

Justin LaReau, a former Kankakee area teacher and coach, started production on “Lantern’s Lane” in July 2020 and was one of few filmmakers at the time to navigate production again after COVID-19 hit.

The film is based on an urban legend of a location when driving from Watseka toward Danville known as Lantern’s Lane, where an old woman from the late 1800s is said to have been murdered when she went out looking for her husband.

The legend goes that you can see the woman’s ghost and the ember from her lantern still roaming the property.

The influence of his hometown is evident in LaReau’s past work as well.

In 2014, two years after moving to Los Angeles to study film, he returned to Watseka and used Iroquois County cornfields as a backdrop for the horror film “The Wicked.”

“Lantern’s Lane” is being distributed through Vertical Entertainment and will be shown in select theaters and available for streaming On Demand starting Friday.

The closest select theater viewings will be at Emagine Theaters in Portage, Indiana. It is also being shown in New York, Los Angeles, Philadelphia, Tampa, Detroit, Minneapolis, Houston, Dallas and Kansas City.

AMITA Health St. Mary’s Hospital in Kankakee has extended it vaccination deadline from Nov. 12 to Jan. 15.

In an update to employees, AMITA said the deadline has been pushed back from Nov. 12 to Jan. 15.

The hospital cited the need for additional time to “review and respond” to the submitted exemption requests.

The Nov. 12 deadline was established in late August.

In an update to employees, management noted since announcing a vaccine requirement at AMITA Health, its goal has been to adhere to all state and federal requirements regarding vaccination of healthcare workers.

“As we approach the deadline for compliance with the COVID-19 vaccination requirement, we have heard from our associates that additional time is needed to review and respond to the requests submitted for medical and religious exemptions,” the notice stated.

AMITA noted no new exemption submissions will be permitted with the exception of a new medical condition that would make vaccine use potentially harmful.

The organization’s announcement concluded by noting it hopes these two additional months will “resolve and communicate exemption decisions” and time for reflection on receipt of the vaccine will help bring all associates into compliance with the requirement.

The AMITA announcement comes on the heels of Riverside Healthcare’s unpaid suspension of 62 full-time equivalent employees on Monday for failure to comply with the mandate.

Riverside also has 57 employees involved in an injunction seeking to block the hospital from suspending and/or firing workers for failure to receive the vaccination. The injunction is slated to be heard in Kankakee County court on Jan. 11.

Nelson said the timing of St. Mary’s new deadline of Jan. 15 was not set in relation to the Riverside court date.

“This was a system-wide decision taking into account many factors,” he said.

He said the AMITA leadership team has closely monitored the recommendations of the Centers for Disease Control and Prevention and other regulatory agencies regarding vaccination.

“All decisions are made with a focus on supporting what’s best for our patients, our communities and our associates,” he said. “... We continue to encourage all associates and contractors to receive their vaccination for the good of our patients, their families and one another.”

It’s not just a lyric from a 1970s song performed by The Five Man Electrical Band.

In Bourbonnais, 16 signs have been erected throughout the village to provide information and welcome visitors.

It is the second of four phases of the village’s wayfinding master plan.

There are seven directional signs installed around the municipal campus on Main Street NW; eight entryway signs, including one at the corner of West North Street and South Main Street; and one sign at the event and skate park on East Stratford Drive.

“People are just now starting to notice them,” Assistant Administrator Laurie Cyr said. “They are really liking them.”

The signs feature the village’s logo, which is a letter B and a fleur-de-lis. Translated as “flower of the lily,” the fleur-de-lis is symbolic on French heritage.

“This is keeping with our French-Canadian heritage,” Mayor Paul Schore explained.

The first phase of the wayfinder project occurred more than a year ago with the erection of three large signs located at Bourbonnais Parkway and U.S. Route 45/52; at the intersection of South Main Street and Main Street NW (Illinois Route 102); and at the village’s administration building, also on Main Street NW.

“We did a complete planning process three years ago,” Cyr said. “It is a four-year plan. These are directional signs to key attractions that are strategically placed.”

Depending on the location of the sign, they are paid for through TIF and business district tax revenue, as well as general fund taxes, Cyr said.

Planning for the third phase of the project will begin in May 2022. The village’s budget will set the project cost, which is expected to range from $95,000 to $153,000, Cyr said. This phase will see an additional 29 signs placed throughout the village. There are eight signs in Phase 4.

When completed, there will be 62 signs in all.

That plan includes the Community Campus proposal which would turn the Municipal Center grounds into a community gathering point for concerts, festivals, playground and a splash pad.

“This is just part of the process of bringing in the aesthetics, the [village’s] branding,” Van Mill said. “Tying it all into the village.”

Here are the sites where the latest Wayfinding signs have been placed: