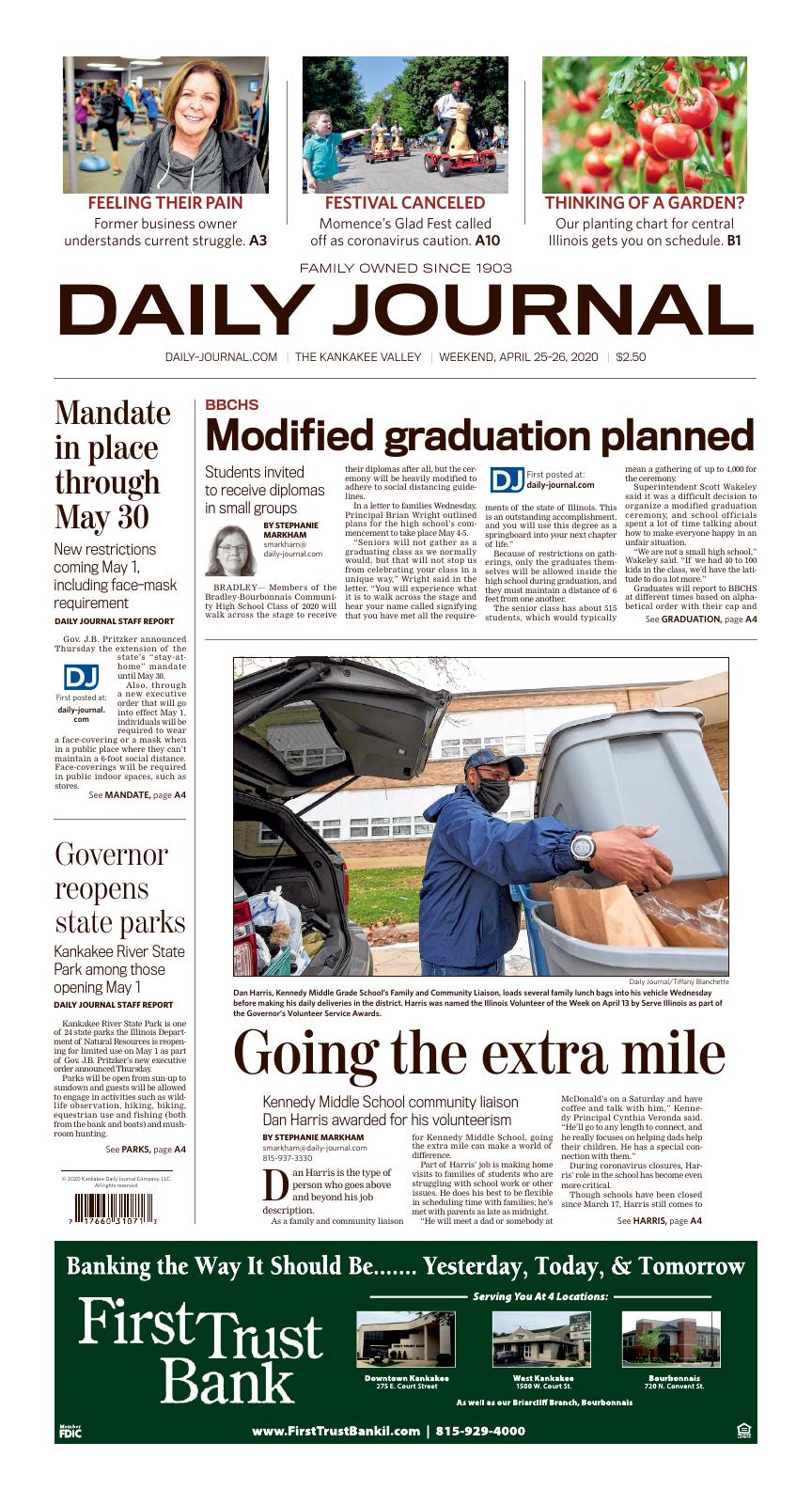 BRADLEY— Members of the Bradley-Bourbonnais Community High School Class of 2020 will walk across the stage to receive their diplomas after all, but the ceremony will be heavily modified to adhere to social distancing guidelines.

In a letter to families Wednesday, Principal Brian Wright outlined plans for the high school’s commencement to take place May 4-5.

“Seniors will not gather as a graduating class as we normally would, but that will not stop us from celebrating your class in a unique way,” Wright said in the letter. “You will experience what it is to walk across the stage and hear your name called signifying that you have met all the requirements of the state of Illinois. This is an outstanding accomplishment, and you will use this degree as a springboard into your next chapter of life.”

Because of restrictions on gatherings, only the graduates themselves will be allowed inside the high school during graduation, and they must maintain a distance of 6 feet from one another.

The senior class has about 515 students, which would typically mean a gathering of up to 4,000 for the ceremony.

Superintendent Scott Wakeley said it was a difficult decision to organize a modified graduation ceremony, and school officials spent a lot of time talking about how to make everyone happy in an unfair situation.

Graduates will report to BBCHS at different times based on alphabetical order with their cap and gown, cords, medals, etc. These items will be distributed at the high school April 30.

Groups of graduates will be called in and wait in the hall at an appropriate distance from one another before having their individual names called to walk across the stage and receive their diploma.

Each senior will be recorded walking across the stage, and a professional video production of the ceremony will be available for viewing at 7:30 p.m. May 16, which was the original date and time of graduation. A link to view the ceremony will be emailed to families closer to that date.

Wakeley said it is unfortunate families will not be able to view the ceremony in person, but this seemed like the best option to honor graduates given the circumstances.

“It would be a matter of playing Russian Roulette with 4,000 people [with a traditional ceremony],” he said. “You can’t social distance 4,000 people.”

Wakeley said the option to push graduation back later in the year was also considered, but the reality is that many seniors will have moved away from home by late summer or August. Even then, large gatherings may still be restricted.

The school district will purchase a 5-by-7-inch portrait of each senior as a token of appreciation. The district also has purchased congratulatory signs for families to display in their yards which will be distributed at graduation.

Students who do not wish to take part in the ceremony will have the option to submit a picture of themselves in their cap and gown or a senior picture to be included in the video.

Wright went on to say in the letter that he is proud of the Class of 2020.

“I do not want this ceremony to diminish the four years of hard work and dedication that each senior has accomplished,” Wright said. “You have experienced something that will not define you, and you will leave BBCHS having made an impact.”

Dan Harris, Kennedy Middle Grade School’s Family and Community Liaison, loads several family lunch bags into his vehicle Wednesday before making his daily deliveries in the district. Harris was named the Illinois Volunteer of the Week on April 13 by Serve Illinois as part of the Governor’s Volunteer Service Awards.

Dan Harris, Kennedy Middle Grade School's Family and Community Liaison, holds a delivery of school work and snacks for a student Wednesday at Kennedy Middle School before making his daily deliveries in the district.

KANKAKEE — Dan Harris is the type of person who goes above and beyond his job description.

As a family and community liaison for Kennedy Middle School, going the extra mile can make a world of difference.

Part of Harris’ job is making home visits to families of students who are struggling with school work or other issues. He does his best to be flexible in scheduling time with families; he’s met with parents as late as midnight.

“He will meet a dad or somebody at McDonald’s on a Saturday and have coffee and talk with him,” Kennedy Principal Cynthia Veronda said. “He’ll go to any length to connect, and he really focuses on helping dads help their children. He has a special connection with them.”

During coronavirus closures, Harris’ role in the school has become even more critical.

Though schools have been closed since March 17, Harris still comes to work every day to greet families picking up meals. He and school administrators have been making home visits to check on students who have lost touch with their teachers and to deliver technology.

Additionally, Harris has been delivering daily meals to seven families who don’t have transportation to Kankakee schools where grab-and-go breakfasts and lunches are served.

“I have some real good connections with children and families because I see them a lot,” he said. “I know their stories. I know what they’ve struggled with.”

He said it is especially important for him to maintain connections with students because some families don’t have a strong male presence.

“They may see me as kind of a dad or as a grandpa,” he said. “I have a couple girls who call me granddad.”

Veronda said everyone in the school community knows Harris. A running joke among colleagues is that Harris is causing a “road block” out by the parent pick-up lane because everyone wants to stop and chat with him.

“[Families] look forward to seeing him on a daily basis,” Veronda said.

Harris was recently recognized by the state volunteer organization Serve Illinois for his dedication to his work that often extends outside of what is required of him as a part-time employee. The organization featured him on its website as the Volunteer of the Week for the week of April 13.

Harris admits he works longer hours than he should because he feels it is necessary.

His position is funded by a grant that only budgets part-time hours. Despite his value to the school community, Harris is humble about receiving praise.

He said he felt “unworthy” to receive the recognition, as he is only “part of the puzzle” when it comes to looking after students’ needs.

“I’m just doing my part,” Harris said. “It’s not necessarily the job, but it’s my duty, because a lot of the families that we serve in the community, oftentimes they live in the same community that I live, so I see them often and I know how they’re living.”

During the regular school year, he helps students with their social/ emotional balance, family concerns and academic progress. He will often have talks with students in the halls when teachers notice they are having issues.

For the entire seven years he’s worked at Kankakee School District, Harris has also run a chess club, which he uses as a tool to relate to students.

As for advice to parents who find themselves overwhelmed with managing their children’s schoolwork at home right now, Harris has two bits of advice: have fun, and have a routine.

“For one, I would say take the time to enjoy your family. Two, have a routine,” Harris said. “Sometimes not having a routine is kind of chaotic, but a lot of our children miss school or have a better time at school than at home because we have a routine that they follow, and that’s consistent.”

Gov. J.B. Pritzker announced Thursday the extension of the state’s “stay-at-home” mandate until May 30.

Also, through a new executive order that will go into effect May 1, individuals will be required to wear a face-covering or a mask when in a public place where they can’t maintain a 6-foot social distance. Face-coverings will be required in public indoor spaces, such as stores.

This new requirement applies to all individuals over the age of 2 who are able to medically tolerate a face-covering or a mask.

Also in the press release, Pritzker said that decision to extend the “stay at home” mandate was made “based on data from scientists and health experts and after consulting with stakeholders across the state.” He said the extension and new requirements will “continue the life-saving progress made over the last month.”

“Make no mistake, Illinois has saved lives,” Pritzker said. “By staying home and social distancing, we have kept our infection and death rates for the months of March and April thousands below the rates projected had we not implemented these mitigation strategies.

In conjunction with the announcement, Pritzker released modeling that shows the state is projected to see a peak or plateau of deaths per day between late April and early May.

Golf will be permitted under strict safety guidelines provided by the Illinois Department of Commerce and Economic Opportunity and when ensuring that social distancing is followed.

• Non-essential retail: Retail stores not designated as non-essential businesses and operations may re-open to fulfill telephone and online orders through pick-up outside the store and delivery.

A couple strolls on a Kankakee River State Park west of the swinging bridge over Rock creek.

Kankakee River State Park is one of 24 state parks the Illinois Department of Natural Resources is reopening for limited use on May 1 as part of Gov. J.B. Pritzker’s new executive order announced Thursday.

Parks will be open from sun-up to sundown and guests will be allowed to engage in activities such as wildlife observation, hiking, biking, equestrian use and fishing (both from the bank and boats) and mushroom hunting.

Fishing and boating in groups of no more than two people will be permitted.

At the direction of the Illinois Department of Public Health, restrooms, shower buildings (for restroom and handwashing use only) and flush toilet buildings with hand-washing facilities will be open.

In March, he had ordered all state parks closed as an effort curb spread of the coronavirus.

If you do choose to visit one of the state parks re-opening on May 1, the Illinois Department of Natural Resources asks residents to remember the following:

• Practice social distancing by keeping at least six feet of distance between yourself and others;

• Please stay home if you are sick or feeling any symptoms, such as fever, coughing, troubled breathing, and/or other flu-like symptoms;

• Visit alone or with members of your household;

• Stay local and visit parks that are closest to where you live;

• If you arrive at a park and crowds are forming, please move to another area or return another time/day to visit; and 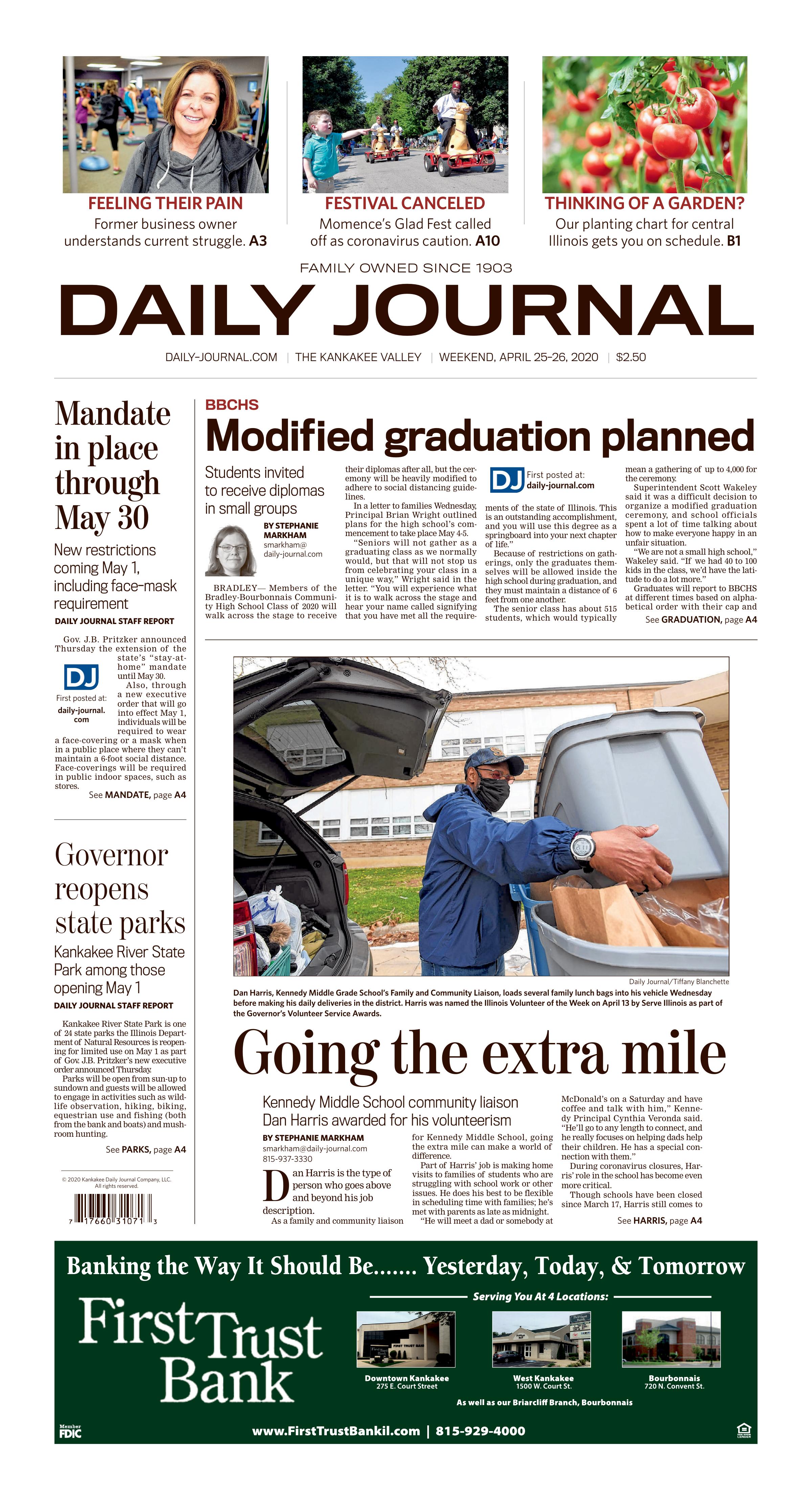