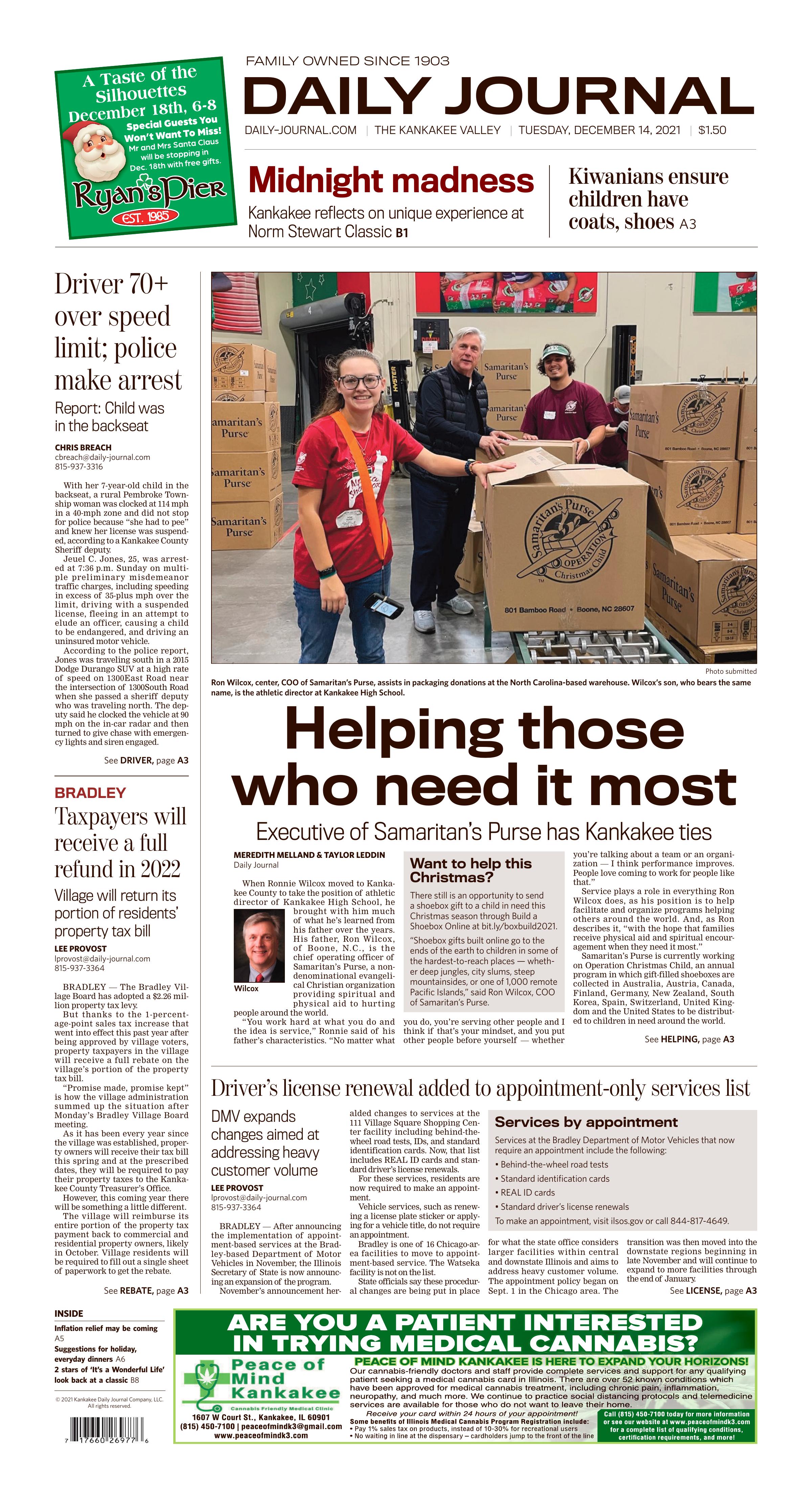 Ron Wilcox, right, accepts a donation for Samaritan's Purse in 2012.

When Ronnie Wilcox moved to Kankakee County to take the position of athletic director of Kankakee High School, he brought with him much of what he’s learned from his father over the years. His father, Ron Wilcox, of Boone, N.C., is the chief operating officer of Samaritan’s Purse, a nondenominational evangelical Christian organization providing spiritual and physical aid to hurting people around the world.

“You work hard at what you do and the idea is service,” Ronnie said of his father’s characteristics. “No matter what you do, you’re serving other people and I think if that’s your mindset, and you put other people before yourself — whether you’re talking about a team or an organization — I think performance improves. People love coming to work for people like that.”

Service plays a role in everything Ron Wilcox does, as his position is to help facilitate and organize programs helping others around the world. And, as Ron describes it, “with the hope that families receive physical aid and spiritual encouragement when they need it most.”

Samaritan’s Purse is currently working on Operation Christmas Child, an annual program in which gift-filled shoeboxes are collected in Australia, Austria, Canada, Finland, Germany, New Zealand, South Korea, Spain, Switzerland, United Kingdom and the United States to be distributed to children in need around the world.

“We have nearly 575,000 volunteers worldwide — with more than 270,000 of those in the U.S. — who are actively involved in collecting, shipping and distributing shoebox gifts so that children can hear the hope of the gospel,” Ron said.

Families around the world pack shoeboxes with toys, school supplies and hygiene items to send worldwide. Ron shared that, in addition to the gift itself, a gift box provides an opportunity to share about Jesus Christ and God’s love.

Since 2009, more than 26.5 million children who have received a shoebox gift have participated in The Greatest Journey — a 12-lesson discipleship program. Children learn from trained, local volunteers what it means to follow Jesus and share their faith with friends and family.

This year, shoebox gifts were dropped off at more than 4,500 locations around the country during National Collection Week. The organization has a goal of sending 10 million shoebox gifts to children around the world, “but we know the incredible, and sometimes eternal, impact that a shoebox gift can have on even one child,” Ron shared.

An impact was made on a local level this year, as Faith Reformed Church in Kankakee (a small congregation of less than 100) donated 1,283 boxes, with Sylvia Boozer of St. Anne donating 253 boxes.

“That’s how I spend my time,” said Boozer of packing boxes. “I pray for the box as I’m packing and buying for it … I think of those children. I don’t know who’s going to get it, but it warms my heart to know that they will [receive it].”

“We are incredibly grateful to Kankakee families as they help us further the gospel through Operation Christmas Child,” Ron said. “Without local volunteers and church partners, we wouldn’t be able to reach millions of children around the world with the gift of hope this Christmas season.”

There still is an opportunity to send a shoebox gift to a child in need this Christmas season through Build a Shoebox Online at bit.ly/boxbuild2021.

“Shoebox gifts built online go to the ends of the earth to children in some of the hardest-to-reach places — whether deep jungles, city slums, steep mountainsides, or one of 1,000 remote Pacific islands,” said Ron.

Ron Wilcox has served with Samaritan’s Purse since March 2004. He began his career with the ministry as internal auditor and currently serves as the chief operating officer, assisting Franklin Graham with the daily operations of the ministry. Prior to coming to Samaritan’s Purse, he worked as a certified public accountant for 29 years and was a partner with CapinCrouse for 18 years.

A native of Illinois, Ron graduated from Eastern Illinois University. He and his high school sweetheart, Susan, have been married for 46 years. They have four grown children and 13 grandchildren.

“My dad has always been a servant leader … I believe that’s why he’s been elevated to the position he’s at now in his life, especially with an organization like Samaritan’s Purse, because of how he loves and cares about people,” Ronnie said.

In her 21st year of participating in Operation Christmas Child, Sylvia Boozer, of St. Anne, put together and donated 253 boxes during last month’s collection at Faith Reformed Church. These boxes will be given to children in need all around the world.

Want to help this Christmas?

There still is an opportunity to send a shoebox gift to a child in need this Christmas season through Build a Shoebox Online at bit.ly/boxbuild2021.

“Shoebox gifts built online go to the ends of the earth to children in some of the hardest-to-reach places — whether deep jungles, city slums, steep mountainsides, or one of 1,000 remote Pacific Islands,” Ron Wilcox, COO of Samaritan’s Purse.

“Without local volunteers and church partners, we wouldn’t be able to reach millions of children around the world with the gift of hope this Christmas season.”

An example of an Illinois driver's license

BRADLEY — After announcing the implementation of appointment-based services at the Bradley-based Department of Motor Vehicles in November, the Illinois Secretary of State is now announcing an expansion of the program.

For these services, residents are now required to make an appointment.

Vehicle services, such as renewing a license plate sticker or applying for a vehicle title, do not require an appointment.

Bradley is one of 16 Chicago-area facilities to move to appointment-based service. The Watseka facility is not on the list.

State officials say these procedural changes are being put in place for what the state office considers larger facilities within central and downstate Illinois and aims to address heavy customer volume. The appointment policy began on Sept. 1 in the Chicago area. The transition was then moved into the downstate regions beginning in late November and will continue to expand to more facilities through the end of January.

Letters will be mailed to those who qualify to renew their driver’s license and ID cards online, by phone or by mail. The state office will send out the online renewal letters 90 days before cards expire.

Senior citizens, veterans, persons with disabilities and expectant mothers will continue to be served as walk-ins at all designated appointment facilities, including Bradley.

For quicker access to available appointments, the state says, customers should visit ilsos.gov as new appointments are available each day. Appointments can also be made by calling the appointment hotline at 844-817-4649.

The Secretary of State's Department of Motor Vehicles office in Bradley will be following a new directive when it comes to those seeking driver's examinations.

The Bradley Village Board OK'd the move of the Secretary of State's office from 1111 Blatt Boulevard to 111 Village Square.

Services at the Bradley Department of Motor Vehicles that now require an appointment include the following:

With her 7-year-old child in the backseat, a rural Pembroke Township woman was clocked at 114 mph in a 40-mph zone and did not stop for police because “she had to pee” and knew her license was suspended, according to a Kankakee County Sheriff deputy.

Jeuel C. Jones, 25, was arrested at 7:36 p.m. Sunday on multiple preliminary misdemeanor traffic charges, including speeding in excess of 35-plus mph over the limit, driving with a suspended license, fleeing in an attempt to elude an officer, causing a child to be endangered, and driving an uninsured motor vehicle.

According to the police report, Jones was traveling south in a 2015 Dodge Durango SUV at a high rate of speed on 1300East Road near the intersection of 1300South Road when she passed a sheriff deputy who was traveling north. The deputy said he clocked the vehicle at 90 mph on the in-car radar and then turned to give chase with emergency lights and siren engaged.

The deputy pulled in behind the Durango and observed someone run to the east side of the house. He ordered all occupants to remain in the vehicle. Jones then returned and said she was driving the vehicle, according to the police report. The vehicle is owned by the front-seat passenger, a 22-year-old Pembroke Township man.

Jones said she “was speeding because she had to pee” and knew her license was suspended, according to the police report.

Police say there were two passengers in the backseat: a 19-year-old St. Anne resident and Jones’ 7-year-old child.

Jones was taken to Jerome Combs Detention Center following the incident on Sunday and remained in custody as of Monday afternoon.

BRADLEY — The Bradley Village Board has adopted a $2.26 million property tax levy.

But thanks to the 1-percentage-point sales tax increase that went into effect this past year after being approved by village voters, property taxpayers in the village will receive a full rebate on the village’s portion of the property tax bill.

“Promise made, promise kept” is how the village administration summed up the situation after Monday’s Bradley Village Board meeting.

As it has been every year since the village was established, property owners will receive their tax bill this spring and at the prescribed dates, they will be required to pay their property taxes to the Kankakee County Treasurer’s Office.

However, this coming year there will be something a little different.

The village will reimburse its entire portion of the property tax payment back to commercial and residential property owners, likely in October. Village residents will be required to fill out a single sheet of paperwork to get the rebate.

The paperwork will basically confirm the addresses/property identification numbers, the owner’s name and mailing address, and the amount of village taxes paid.

The rebate has no impact on other taxes paid by a Bradley resident such as those going to school districts.

Once the information is confirmed, the village will then issue a single check to the owner for the village’s share of the taxes paid.

It was in March 2020 when village voters — by a 2-1 margin — approved raising the sales tax rate by 1 percentage point from 6.25 to 7.25. A large portion of the taxes generated are being used to fully fund the village’s police and fire pensions, according to village officials.

Bradley Mayor Mike Watson said the money will come in 2022 at a time when residents may be starting to think about purchasing Christmas gifts.

“This will be just in time for Christmas 2022. Then residents can spend that money right here in Bradley,” he said.

With many governmental bodies struggling to make ends meet, Bradley is bucking the trend and village officials say the just-completed Fiscal Year 2021 audit proves it.

Recreational-use marijuana will be available in Bradley perhaps within the next five to six months.