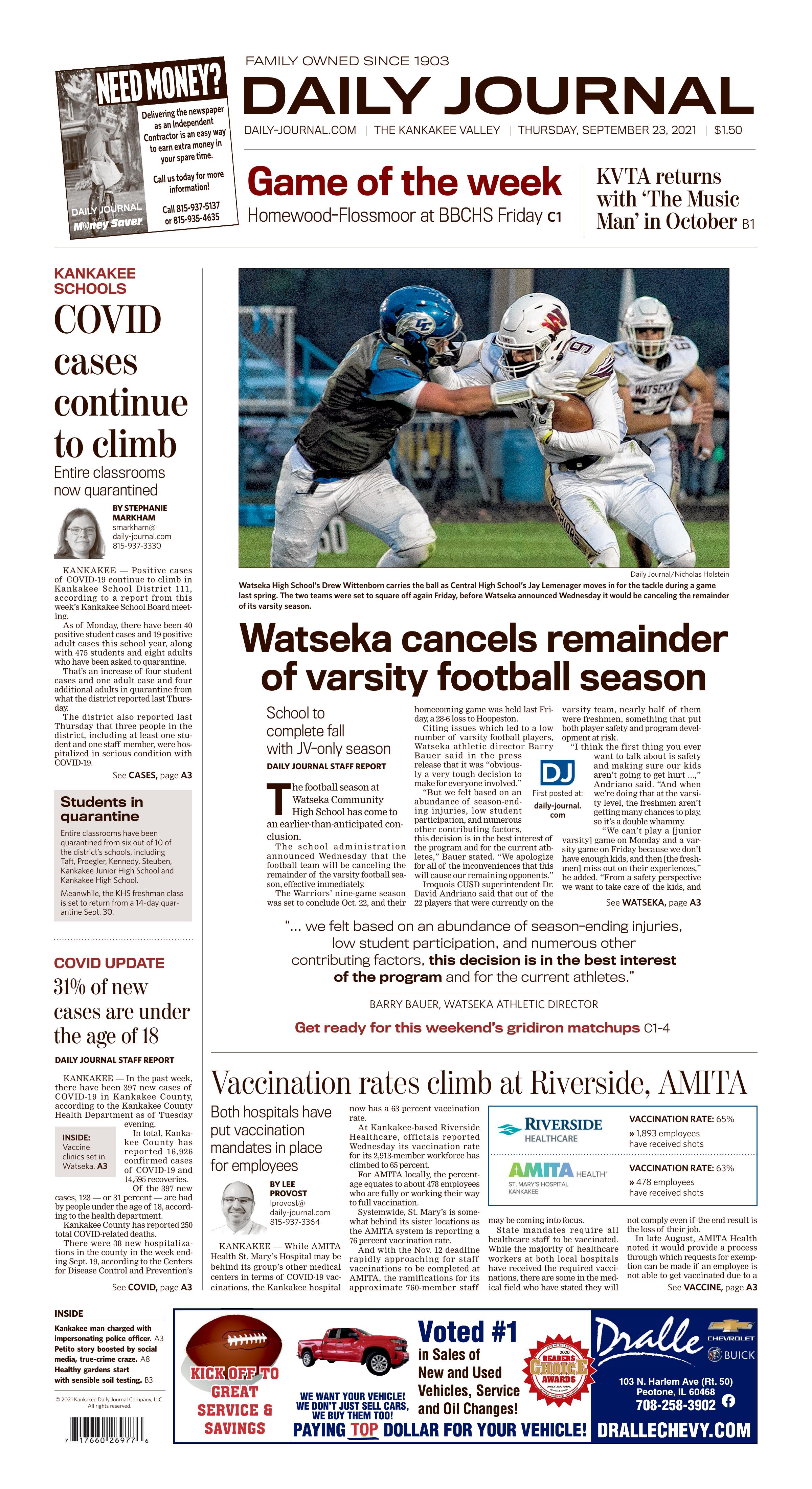 Watseka High School’s Drew Wittenborn carries the ball as Central High School’s Jay Lemenager moves in for the tackle during a game last spring. The two teams were set to square off again Friday, before Watseka announced Wednesday it would be canceling the remainder of its varsity season.

WATSEKA — The football season at Watseka Community High School has come to an earlier-than-anticipated conclusion.

The school administration announced Wednesday that the football team will be canceling the remainder of the varsity football season, effective immediately.

The Warriors’ nine-game season was set to conclude Oct. 22, and their homecoming game was held last Friday, a 28-6 loss to Hoopeston.

Citing issues which led to a low number of varsity football players, Watseka athletic director Barry Bauer said in the press release that it was “obviously a very tough decision to make for everyone involved.”

“But we felt based on an abundance of season-ending injuries, low student participation, and numerous other contributing factors, this decision is in the best interest of the program and for the current athletes,” Bauer stated. “We apologize for all of the inconveniences that this will cause our remaining opponents.”

Iroquois CUSD superintendent Dr. David Andriano said that out of the 22 players that were currently on the varsity team, nearly half of them were freshmen, something that put both player safety and program development at risk.

“I think the first thing you ever want to talk about is safety and making sure our kids aren’t going to get hurt ...,” Andriano said. “And when we’re doing that at the varsity level, the freshmen aren’t getting many chances to play, so it’s a double whammy.

Football teams across the state have smaller roster sizes than in past years, which along with COVID-19, has helped lead to at least nine forfeits in each of the first four weeks of the football season.

Andriano said that there were no COVID-19 outbreaks or contact tracing issues that led to low numbers, but he did note that the pandemic, along with the 2020-21 season being played in the spring, might show the pandemic had an indirect impact on the current situation.

Former Watseka football coach Aaron Hilgendorf left for Mascoutah at the end of the season, and former assistant Stephen Rigsby was promoted late in the summer. Also last year, the team lost 19 seniors.

This season’s roster featured four seniors — Kage Brault, Chase Walwer, David Netzband and Shannon Woods — all of whom saw their prep football careers come to a premature end with the decision.

“They’ve gone through the program and are the backbone, and it’s supposed to be their time to shine,” Andriano said. “That’s heartbreaking to have to tell a senior that their season is over.”

And as someone with football deeply entwined into his background in administration, he said he understands how much the Watseka community might be hurting with Wednesday’s announcement.

“Those kids that are in the program are building character, not just on the field, but every day — you live it, you walk it and you show it with your actions,” Andriano said. “It makes a huge difference in their lives, and they have people like coach Rigsby, [assistant coach] John Anderson, quality people that I would love for my kids to be under and to have been coached by.

“They’re great people that care about the kids, not just football, and that’s how you build a program.”

While the varsity season has been canceled, the junior varsity team will finish the final four games on its schedule, as the school hopes to continue rebuilding a program that first began football in 1897, according to IHSA records.

"... we felt based on an abundance of season-ending injuries, low student participation, and numerous other contributing factors, this decision is in the best interest of the program and for the current athletes."

AdventHealth and Ascension will end their partnership, with St. Mary's Hospital Kankakee once again becoming part of Ascension.

KANKAKEE — While AMITA Health St. Mary’s Hospital may be behind its group’s other medical centers in terms of COVID-19 vaccinations, the Kankakee hospital now has a 63 percent vaccination rate.

At Kankakee-based Riverside Healthcare, officials reported Wednesday its vaccination rate for its 2,913-member workforce has climbed to 65 percent.

For AMITA locally, the percentage equates to about 478 employees who are fully or working their way to full vaccination.

Systemwide, St. Mary’s is somewhat behind its sister locations as the AMITA system is reporting a 76 percent vaccination rate.

And with the Nov. 12 deadline rapidly approaching for staff vaccinations to be completed at AMITA, the ramifications for its approximate 760-member staff may be coming into focus.

State mandates require all healthcare staff to be vaccinated. While the majority of healthcare workers at both local hospitals have received the required vaccinations, there are some in the medical field who have stated they will not comply even if the end result is the loss of their job.

In late August, AMITA Health noted it would provide a process through which requests for exemption can be made if an employee is not able to get vaccinated due to a medical condition or strongly held religious belief.

These exemption requests are being reviewed by members of the Associate and Occupational Health, Human Resources and Mission teams, according to the hospital.

Tim Nelson, an AMITA spokesman, said this week he did not have figures yet as to how many employees may be seeking a religious or other exemption from the vaccination.

Chris Shride, president of AMITA Health St. Mary’s, said in an email response to the Journal, the pandemic has taken a toll on all parts of our community and those in health care have “born a heavier burden than most.”

He said as in prior circumstances, healthcare professionals are needed and called on to lead, even when it’s difficult for the individuals and the organization.

“Authentic caring is never the easiest path. It is, however, our call and our core mission,” he said. “Vaccination against COVID-19 is the most basic step we as a united community can take to best protect one another. In this, healthcare professionals will answer the call.”

He added the hospital has seen a dramatic increase in the number of employees vaccinated in recent days.

Riverside Healthcare notified what could be hundreds of employees by email on Friday that their religious exemption request regarding the COVID-19 vaccination has been denied.

KANKAKEE — In the past week, there have been 397 new cases of COVID-19 in Kankakee County, according to the Kankakee County Health Department as of Tuesday evening.

There were 38 new hospitalizations in the county in the week ending Sept. 19, according to the Centers for Disease Control and Prevention’s COVID data tracker.

As of Tuesday, the hospital bed availability in Region 7, which is comprised of Kankakee and Will counties, was at 23 percent and its seven-day rolling average of COVID-19 patients in the hospital was 124, according to IDPH.

Community transmission of the virus was most recently tracked on Tuesday at 330 positive cases in the past week per 100,000 people in the county, according to the CDC’s COVID data tracker. More than 100 cases per 100,000 is considered high.

The Illinois Department of Public Health reported that the seven-day rolling average of positive tests out of total tests taken in Kankakee County was 6.9 percent on Sept. 19, a decrease from the recent high of 8.9 percent on Sept. 13. Region 7 had 4.8 percent average test positivity on Sept. 19.

There are 2,081 cases currently active in Kankakee County, according to the health department.

In that time, two individuals with COVID-19 have died, the health department said.

There have been 3,282 confirmed cases and 665 probable cases of COVID-19 in total, ICPHD reported.

Iroquois County has seen seven new COVID hospitalizations in the week ending on Sept. 19, according to the CDC’s data tracker.

The seven-day rolling average of test positivity in Iroquois County was 5.8 percent on Sept. 19, according to IDPH data.

The delta variant of COVID-19 has been identified in Kankakee and Iroquois county individuals.

No appointment needed, walk-ins welcome between 9 a.m. and 4 p.m.

For registration at any CVS location, visit cvs.com/minuteclinic/covid-19-testing

For registration at any Walgreens location, walgreens.com/findcare/covid19/testing?ban=covid_vanity_testing