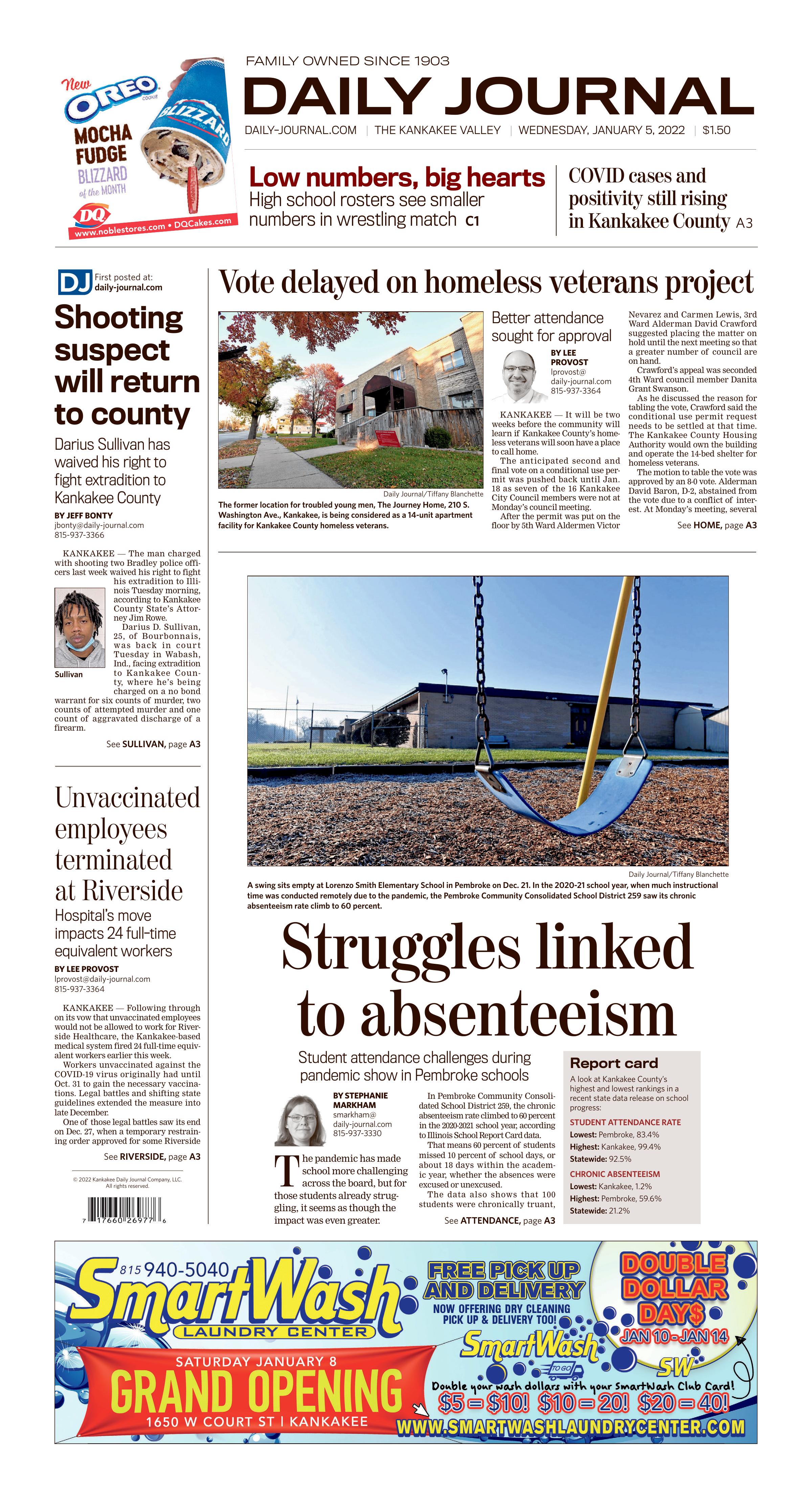 KANKAKEE — It will be two weeks before the community will learn if Kankakee County’s homeless veterans will soon have a place to call home.

The anticipated second and final vote on a conditional use permit was pushed back until Jan. 18 as seven of the 16 Kankakee City Council members were not at Monday’s council meeting.

After the permit was put on the floor by 5th Ward Aldermen Victor Nevarez and Carmen Lewis, 3rd Ward Alderman David Crawford suggested placing the matter on hold until the next meeting so that a greater number of council are on hand.

As he discussed the reason for tabling the vote, Crawford said the conditional use permit request needs to be settled at that time. The Kankakee County Housing Authority would own the building and operate the 14-bed shelter for homeless veterans.

The motion to table the vote was approved by an 8-0 vote. Alderman David Baron, D-2, abstained from the vote due to a conflict of interest. At Monday’s meeting, several council members were absent. Those absent were Carl Brown, D-7; Mike Cobbs, D-6; Larry Osenga, R-4; Mike O’Brien, D-2; and Cherry Malone-Marshall, D-1.

At the conclusion of the meeting, 4th Ward Alderman Lance Marczak left no doubt where he stood on this permit request.

“This should not be a question at all. These people were willing to sacrifice for our country,” he said, making it clear he will support the permit request at the next meeting.

After the meeting, KCHA attorney Eric Hanson said he was OK with the vote being delayed. He noted the Illinois Housing Development Authority, which is funding a large portion of the purchase and development of the property at 210-214 S. Washington Ave., in the city’s 5th Ward, would not be meeting on its final approval of the project until Jan. 21.

IHDA has given initial approval to invest $2.9 million into the purchase and redevelopment of the property.

The property has been vacate for more than a year. It had been the longtime location for Senesac Funeral Home & Cremation and most recently an off-site residence for troubled young men known as the Nexus-Indian Oaks Academy.

A swing sits empty at Lorenzo Smith Elementary School in Pembroke on Dec. 21. In the 2020-21 school year, when much instructional time was conducted remotely due to the pandemic, the Pembroke Community Consolidated School District 259 saw its chronic absenteeism rate climb to 60 percent.

PEMBROKE — The pandemic has made school more challenging across the board, but for those students already struggling, it seems as though the impact was even greater.

That means 60 percent of students missed 10 percent of school days, or about 18 days within the academic year, whether the absences were excused or unexcused.

The data also shows that 100 students were chronically truant, meaning they missed 5 percent of school days, or about nine days.

The daily attendance rate was 83.4 percent.

“Most of those students were already truant,” Superintendent Marcus Alexander said. “They didn’t just start [missing school] during the pandemic. Those are students we have been working with prior to, so it wasn’t really a surprise.”

The district, which consists only of Lorenzo R Smith Elementary School, had the highest chronic absenteeism rate in Kankakee County. The statewide average last year was 21 percent.

Attendance figures under the circumstances of remote learning may be an outlier when it comes to year-to-year statistics, as the Illinois State Board of Education points out in the data; however, the numbers highlight an area in which many students clearly struggled.

Alexander said the district works with the I-KAN Regional Office of Education to address truancy and had been seeing improvements in recent years.

“We have been making progress on it, but with the pandemic, it just exacerbates everything,” he said.

The pandemic certainly put pressure on existing issues, he noted.

According to the report card data, 90 percent of students are low income, and 5.5 percent were homeless last year.

Alexander said the district had difficulty keeping in contact with some students last year. For one reason or another, some never logged on to class.

Overall, one of the biggest challenges was internet connectivity, he said.

“We provided every student and family with a hotspot, but in a rural environment, depending on where you live, that hotspot may not work,” he explained. “A hotspot is nothing more than a cell phone. If your cell phone doesn’t work, nor will a hotspot.”

The district had to switch internet providers for the hotspots mid year because they were not working, but for some families, neither company worked.

“Some of our diligent students would drop on and off 20 times in one day,” he said.

Alexander said that looking ahead, he is optimistic to see the numbers turn back around, especially since school has been in session for face-to-face learning all year.

The district has been hit minimally with COVID-19 this school year, he said, with only two students testing positive at school. Fortunately, the district has not had to shut down the entire school or full classrooms.

While attendance rates so far are looking good, Alexander said he is also mindful that one surge of COVID-19 could shut everything down again.

“We’re just trying to do as much as we can while we have the students available,” he said.

Identifying learning gaps and the necessary interventions to address them were at the forefront of school leaders’ minds when going into the first semester, he explained.

“We knew we had students who really needed intensive support, because they really hadn’t had instruction for over a year,” he said.

Some of the online learning games that proved to help students master concepts during remote learning were incorporated into the in-person curriculum this year, he said.

Testing data from the end of the first semester will be used to inform coursework for the rest of the year, he added.

“In reality, every student needed something extra, not just the students who you knew were struggling, but those students who had just been home not receiving that level of attention they had in the past.”

KANKAKEE — Following through on its vow that unvaccinated employees would not be allowed to work for Riverside Healthcare, the Kankakee-based medical system fired 24 full-time equivalent workers earlier this week.

Workers unvaccinated against the COVID-19 virus originally had until Oct. 31 to gain the necessary vaccinations. Legal battles and shifting state guidelines extended the measure into late December.

One of those legal battles saw its end on Dec. 27, when a temporary restraining order approved for some Riverside employees expired, clearing the way for the hospital’s action.

In mid-December, Riverside’s administration extended the vaccination deadline until Jan. 2 and anyone who was notified they were an employee with enough face-to-face contact with patients would be terminated if they did not move toward gaining the vaccine.

Workers were notified last week that if they did not take the necessary steps they would no longer be a Riverside employee as of Monday.

Phil Kambic, Riverside’s president and CEO, said Tuesday that 99 percent of the approximate 2,900-member staff are vaccinated. The remaining 1 percent have hospital-approved exemptions.

The 24 full-time equivalents referred to 49 workers, who worked either full- or part-time.

AMITA Health St. Mary’s Hospital had a similar vaccination deadline as Riverside, but backed away from that stance a couple weeks ago stating it was waiting on pending court rulings.

Kambic said this was the only decision his health system could make. He stressed every decision is made with the mindset of how it impacts patient safety and care.

“This isn’t ‘us vs. them,’” he said. “This is about our patients. We are healthcare professionals.”

Kambic noted while other organizations may have eased deadlines on mandates, Riverside was not in that frame of mind.

The hospital administration noted they were initially facing the firing of 31 FTEs, but 11th hour vaccinations reduced the figure to 24.

Daniel Shur, the attorney representing the Riverside workers who were seeking exemptions from the mandate, said Tuesday the fight is far from over. Many employees sought relief from the mandate by filing for a religious exemption with the hospital administration.

“We will keep fighting to vindicate the rights of these health care heroes and every American to ensure no one has to choose between their job and their conscience,” he wrote in an email response to The Journal.

“This case will continue as we seek monetary damages from Riverside for illegally firing these nurses,” he concluded.

Neelie Panozzo, the Riverside nurse who has been at the front of the fight against vaccinations as a term of employment, described the action as “disappointing.”

“This fight for faith and freedom must continue in order to preserve our constitutional rights that were created by our forefathers,” she said in an email response. “I am proud of everyone who stood up and refused to comply with government and employer overreach and stayed true to their faith and beliefs.”

A group of five now-former Riverside employees gathered at a Bradley diner Tuesday to express their frustration with the hospital’s decision. Within the group of five, they accounted for nearly 85 years of service at Riverside.

They said they could not believe this situation had led to them seeking either new employment or unemployment benefits. They also wonder how the hospital will make up for the loss of so many experienced and dedicated staff members.

“If we are in a pandemic and patient care is the priority, then letting go of dedicated staff is nonsensical,” said 32-year nurse Beth Norwick.

Fellow registered nurse Tina Irvin said if employers can mandate the vaccination, then it is likely they will soon be mandating the booster in coming weeks.