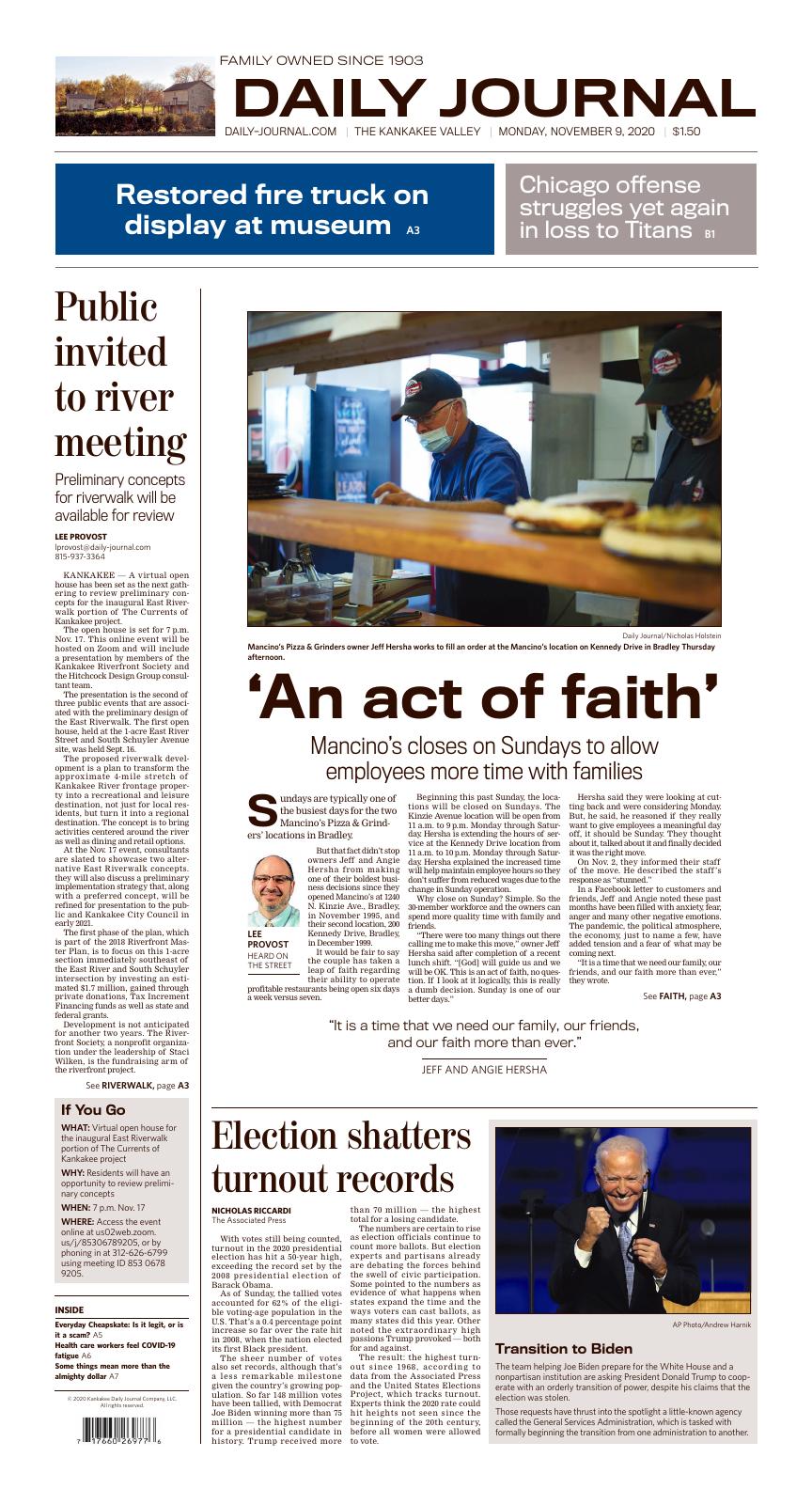 Sundays are typically one of the busiest days for the two Mancino’s Pizza & Grinders’ locations in Bradley.

But that fact didn’t stop owners Jeff and Angie Hersha from making one of their boldest business decisions since they opened Mancino’s at 1240 N. Kinzie Ave., Bradley, in November 1995, and their second location, 200 Kennedy Drive, Bradley, in December 1999.

It would be fair to say the couple has taken a leap of faith regarding their ability to operate profitable restaurants being open six days a week versus seven.

Why close on Sunday? Simple. So the 30-member workforce and the owners can spend more quality time with family and friends.

“There were too many things out there calling me to make this move,” owner Jeff Hersha said after completion of a recent lunch shift. “[God] will guide us and we will be OK. This is an act of faith, no question. If I look at it logically, this is really a dumb decision. Sunday is one of our better days.”

Hersha said they were looking at cutting back and were considering Monday. But, he said, he reasoned if they really want to give employees a meaningful day off, it should be Sunday. They thought about it, talked about it and finally decided it was the right move.

On Nov. 2, they informed their staff of the move. He described the staff’s response as “stunned.”

In a Facebook letter to customers and friends, Jeff and Angie noted these past months have been filled with anxiety, fear, anger and many other negative emotions. The pandemic, the political atmosphere, the economy, just to name a few, have added tension and a fear of what may be coming next.

“It is a time that we need our family, our friends, and our faith more than ever,” they wrote.

“... It is a time for my wife and I, along with our employees, to use this day for rest and to be around the people that are important to us. My hope is that you, our special customers, will understand and continue to support us as you have in the past. All of us at Mancino’s are so grateful for your business and in many cases your friendship and support.”

Since that post went out, Jeff said they have been overwhelmed by the positive feedback regarding this decision.

“Not one negative comment,” he said. “We’ve been humbled by the comments we’ve received. We have the upmost confidence this will work.

“Sometimes there are some things more important than money. It will be an expensive decision. I’d be lying if I said I wasn’t nervous. But it will be fine. I have been assured.”

He added: “We will make it. It’s just the right thing to do.”

But what if it doesn’t work? What if they find they cannot make the business a success without Sunday’s receipts?

That is a bridge they will cross if they are forced to. Until then, if you’re in need of a Mancino’s grinder or pizza, the remaining six days of the week can satisfy that desire.

"It is a time that we need our family, our friends, and our faith more than ever."

As of Sunday, the tallied votes accounted for 62% of the eligible voting-age population in the U.S. That’s a 0.4 percentage point increase so far over the rate hit in 2008, when the nation elected its first Black president.

The numbers are certain to rise as election officials continue to count more ballots. But election experts and partisans already are debating the forces behind the swell of civic participation. Some pointed to the numbers as evidence of what happens when states expand the time and the ways voters can cast ballots, as many states did this year. Other noted the extraordinary high passions Trump provoked — both for and against.

The result: the highest turnout since 1968, according to data from the Associated Press and the United States Elections Project, which tracks turnout. Experts think the 2020 rate could hit heights not seen since the beginning of the 20th century, before all women were allowed to vote.

“It’s hard to imagine we can get higher than this,” said Michael McDonald, a political scientist at the University of Florida who runs the Elections Project.

Texas, which did not expand mail voting but gave voters extra time to cast early ballots in person, saw a whopping more than 9 percentage point increase in turnout, moving from 50% to 59% of its citizen voting-age population going to the polls.

Many of the states with the biggest turnout increases — including Arizona, Texas and Georgia — were new battlegrounds in the presidential race, places where Democrats sought to mobilize new voters and shift Republican strongholds. Some analysts noted the number proved the efficacy of voter outreach and organization efforts.

But the record high participation, to Democrats’ surprise, did not always help them. The party lost House seats and failed to win enough Senate seats outright to take control of the upper chamber — that now rests on runoffs in Georgia. They also failed to turn a single state Legislature from Republican control.

Those results undermine the longtime conventional wisdom that Democrats benefit most from high turnout. It’s a theory even Trump espoused this year, when he warned of “levels of voting” so high that “you’d never have a Republican elected in this country again.”

Democrats were excited about massive early voting in places with normally underperforming electorates, like Texas, “Our position in Texas was always that, we’re not a red state, we’re a non-voting state,” said Gilbert Hinojosa, chairman of the Texas Democratic Party, which had hoped to take control of the Texas House of Representatives.

Instead, Texas Democrats didn’t even come close, despite the jump in voting, losing the presidential vote by 5.5 percentage points, failing to gain any congressional seats or make up ground in the state legislature.

The results had some Democrats second-guessing the party’s decision to idle its door-knocking and in-person voter outreach for months, out of concern about spreading the coronavirus.

“Perhaps we were not reaching the people we needed to for persuasion,” Hinojosa said. “I’ve got to believe that’s just much more effective face-to-face.”

The team helping Joe Biden prepare for the White House and a nonpartisan institution are asking President Donald Trump to cooperate with an orderly transition of power, despite his claims that the election was stolen.

Those requests have thrust into the spotlight a little-known agency called the General Services Administration, which is tasked with formally beginning the transition from one administration to another.

The view from the initial 1-acre development site for the Kankakee Riverwalk at the southeast corner of East River Street and South Schuyler Avenue just outside of downtown Kankakee.

KANKAKEE — A virtual open house has been set as the next gathering to review preliminary concepts for the inaugural East Riverwalk portion of The Currents of Kankakee project.

The open house is set for 7 p.m. Nov. 17. This online event will be hosted on Zoom and will include a presentation by members of the Kankakee Riverfront Society and the Hitchcock Design Group consultant team.

The presentation is the second of three public events that are associated with the preliminary design of the East Riverwalk. The first open house, held at the 1-acre East River Street and South Schuyler Avenue site, was held Sept. 16.

The proposed riverwalk development is a plan to transform the approximate 4-mile stretch of Kankakee River frontage property into a recreational and leisure destination, not just for local residents, but turn it into a regional destination. The concept is to bring activities centered around the river as well as dining and retail options.

At the Nov. 17 event, consultants are slated to showcase two alternative East Riverwalk concepts. They will also discuss a preliminary implementation strategy that, along with a preferred concept, will be refined for presentation to the public and Kankakee City Council in early 2021.

The first phase of the plan, which is part of the 2018 Riverfront Master Plan, is to focus on this 1-acre section immediately southeast of the East River and South Schuyler intersection by investing an estimated $1.7 million, gained through private donations, Tax Increment Financing funds as well as state and federal grants.

Development is not anticipated for another two years. The Riverfront Society, a nonprofit organization under the leadership of Staci Wilken, is the fundraising arm of the riverfront project.

The city of Kankakee recently acquired three parcels of property in this location. This properties will provide the area where development will take place.

“From our community survey, we heard loud and clear that implementation of the 2018 Riverfront Master Plan is either ‘very’ or ‘somewhat important’ to the city’s future,” Wilken said.

She said this upcoming event is the best way for the public to see what the group has already accomplished and to visualize the transformation of the East Riverwalk properties.

WHAT: Virtual open house for the inaugural East Riverwalk portion of The Currents of Kankakee project

WHY: Residents will have an opportunity to review preliminary concepts 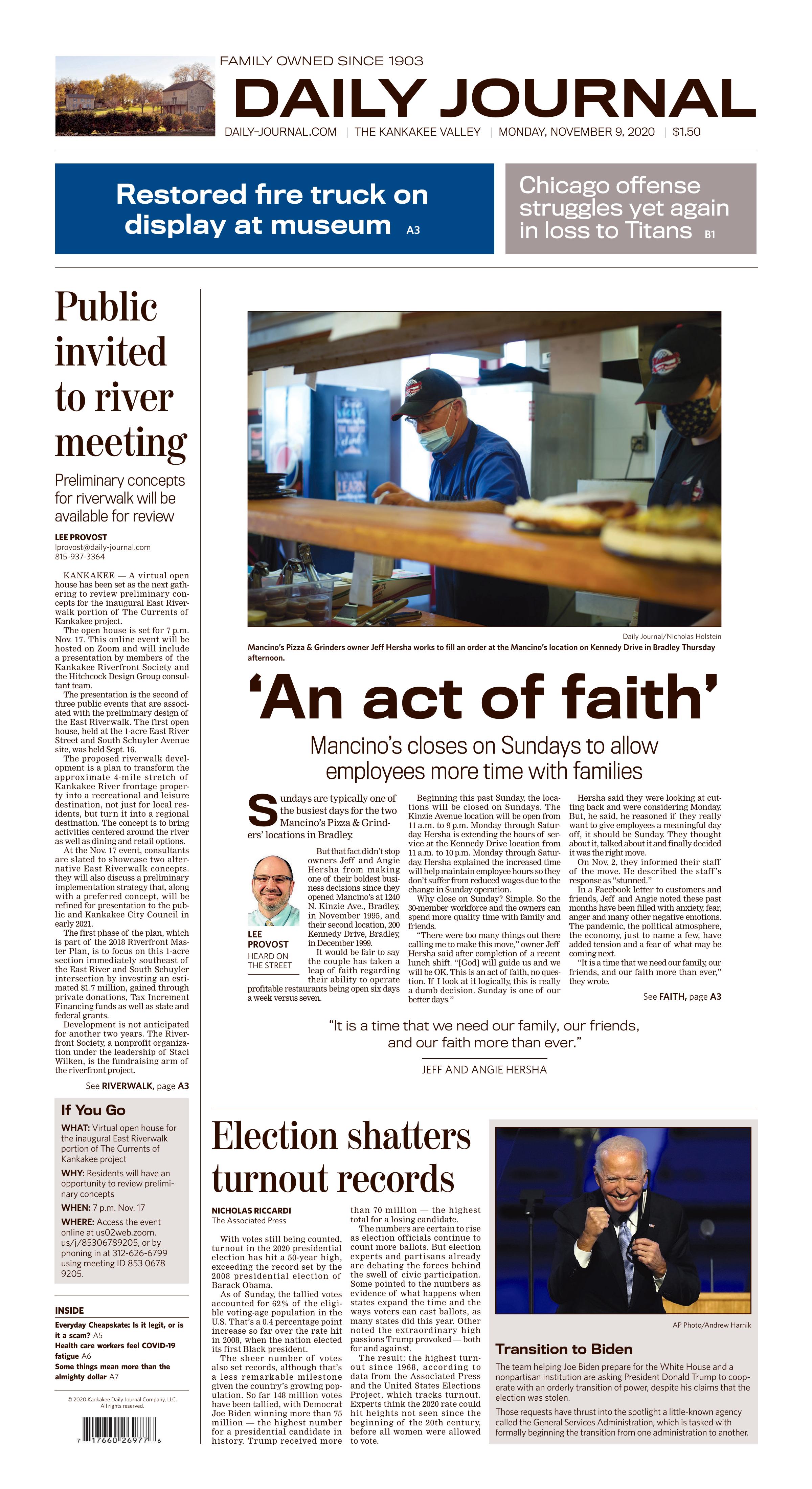