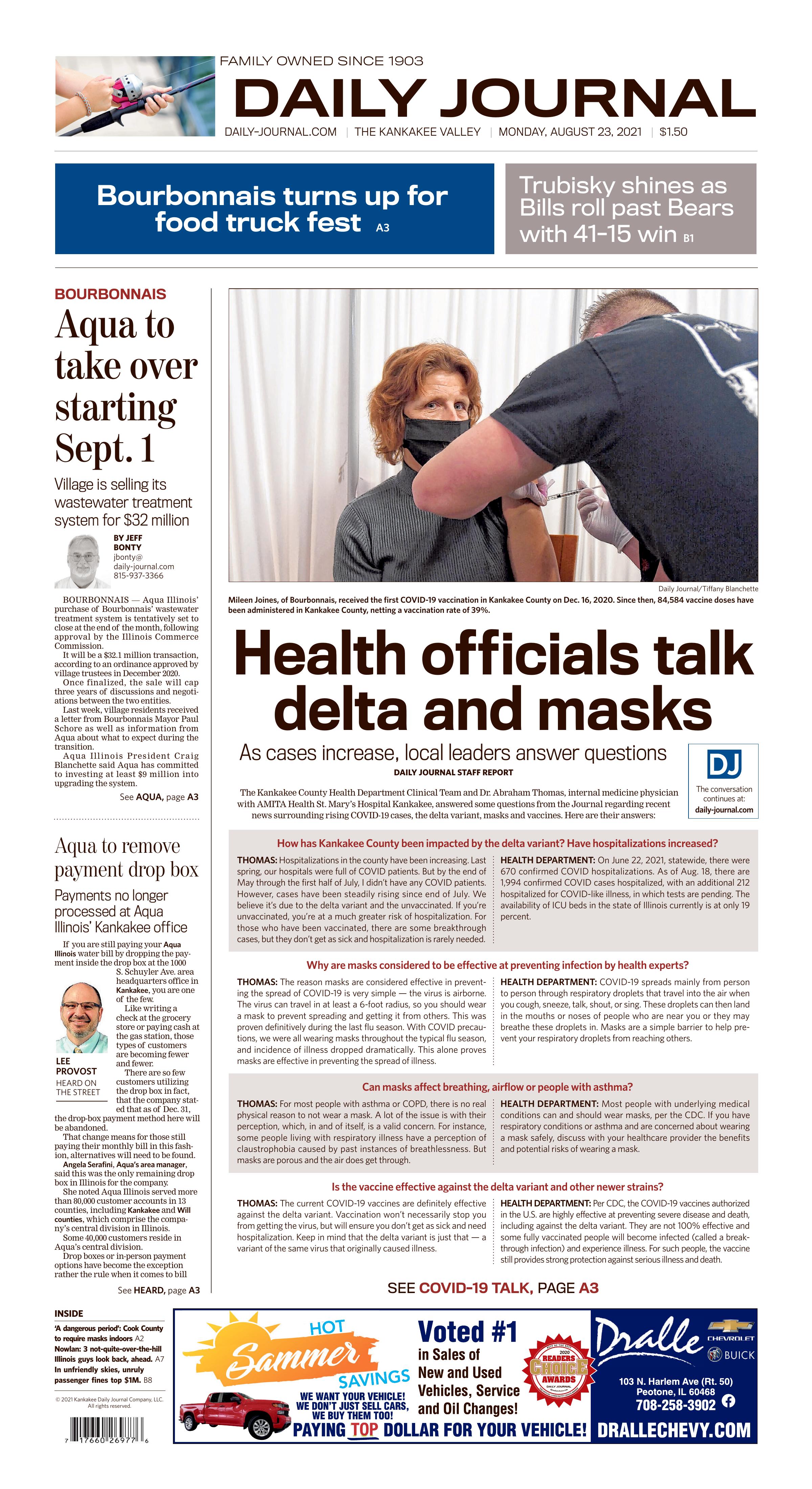 BOURBONNAIS — Aqua Illinois’ purchase of Bourbonnais’ wastewater treatment system is tentatively set to close at the end of the month, following approval by the Illinois Commerce Commission.

It will be a $32.1 million transaction, according to an ordinance approved by village trustees in December 2020.

Once finalized, the sale will cap three years of discussions and negotiations between the two entities.

Last week, village residents received a letter from Bourbonnais Mayor Paul Schore as well as information from Aqua about what to expect during the transition.

“After several months of planning and coordination with the Village of Bourbonnais, Aqua Illinois is prepared to take ownership of the Bourbonnais sewer system on Sept. 1,” Blanchette said.

“On behalf of all of Aqua’s employees, we value the village’s partnership and are eager to get to work as a trusted service provider. With our customers front and center, our dedicated team of professionals looks forward to providing Bourbonnais homes and businesses with quality wastewater service for years to come.”

According to the agreement, when the sale is complete, Aqua will charge customers a monthly base rate of $29.25.

Currently, single-home customers pay a flat monthly but Aqua will switch to a consumption-based rate. Effective May 1, 2022, that monthly rate would be $40.02, which includes 1,000 gallons of usage. A customer would pay more for amounts over 1,000 gallons.

Rates will be calculated on four months (December to March) of water usage in winter.

When the Bourbonnais trustees adopted the ordinance allowing the sale, Trustee Angie Serafini recused herself since she is employed by Aqua Illinois.

Blanchette said Serafini was not involved in the negotiations involving the sewer system transaction.

The payment drop box outside Aqua Illinois office in Kankakee will be removed. After Dec. 31, payments will no longer be accepted at the location. READ MORE.

The payment drop box outside AQUA Illinois office in Kankakee will be removed.

If you are still paying your Aqua Illinois water bill by dropping the payment inside the drop box at the 1000 S. Schuyler Ave. area headquarters office in Kankakee, you are one of the few.

Like writing a check at the grocery store or paying cash at the gas station, those types of customers are becoming fewer and fewer.

There are so few customers utilizing the drop box in fact, that the company stated that as of Dec. 31, the drop-box payment method here will be abandoned.

That change means for those still paying their monthly bill in this fashion, alternatives will need to be found.

Angela Serafini, Aqua’s area manager, said this was the only remaining drop box in Illinois for the company.

She noted Aqua Illinois served more than 80,000 customer accounts in 13 counties, including Kankakee and Will counties, which comprise the company’s central division in Illinois.

Drop boxes or in-person payment options have become the exception rather the rule when it comes to bill payments in today’s world and this is just the latest example of how few people use that option.

Aqua once processed bill payments at the Kankakee office, but that practice ended several years ago, Serafini said, so payments placed in the drop box were simply sent along to the company’s headquarters in Bryn Mawr, Pa.

There are several payment options available. There is still the good ol’ U.S. Post Office, but customers can also pay by phone or online.

However, for those committed to making a payment in person, they can go to an area Currency Exchange.

Because the Schuyler Avenue location no longer processes payments, dropping a payment in the box there actually causes the payment to take longer to reach its destination.

Sunny Singh and his wife, Tajinder Kaur, of Kankakee, will soon be opening a six-station video gaming lounge, a “grab-and-go”-style restaurant, and small grocery and liquor store at 1612-1620 E. Maple St., Kankakee.

The couple received their conditional use permit within the commercially zoned district on Kankakee’s eastside, immediately east of the Gas Depot station at the intersection of South Nelson Avenue and East Maple Street.

The Kankakee Planning Board approved the request by a 6-0 vote last week.

There was not a definitive time for the opening of the 3,900-square-foot location, but Singh hopes to be open by late September or early October. The owners have not yet gained a Kankakee liquor license.

The couple explained approximately 1,000 square feet of the building is intended to be used as a cafe/restaurant with six video gaming machines. The remaining space will be used for the convenience-type store with packaged liquor sales.

The 6th Ward property has been vacant for several years. It was last used as a dry cleaning business.

The couple purchased the property in April. They plan to have the business open daily from 6 a.m. to 10 p.m.