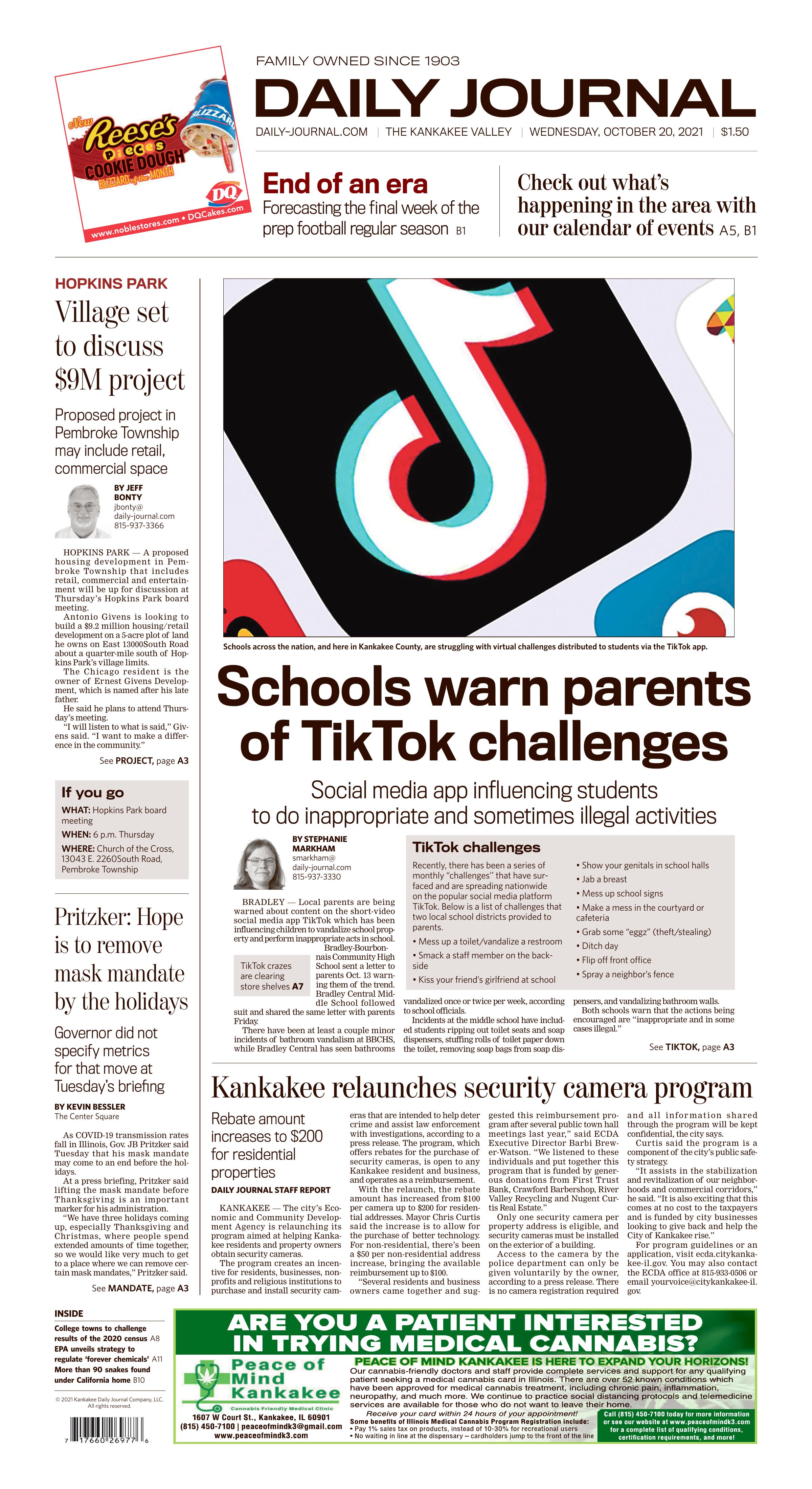 Schools across the nation, and here in Kankakee County, are struggling with virtual challenges distributed to students via the TikTok app.

BRADLEY — Local parents are being warned about content on the short-video social media app TikTok, which has been influencing children to vandalize school property and perform inappropriate acts in school.

There have been at least a couple minor incidents of bathroom vandalism at BBCHS, while Bradley Central has seen bathrooms vandalized once or twice per week, according to school officials.

Incidents at the middle school have included students ripping out toilet seats and soap dispensers, stuffing rolls of toilet paper down the toilet, removing soap bags from soap dispensers, and vandalizing bathroom walls.

Both schools warn that the actions being encouraged are “inappropriate and in some cases illegal.”

“They will not be tolerated within our building and will be followed with the appropriate consequence which may include legal action,” the letter states.

The letter lists monthly challenges that have been circulating on the app.

These include vandalize school restrooms, smack a staff member on the backside, kiss your friend’s girlfriend at school, expose your private area in school halls, jab a breast, mess up school signs, make a mess in the courtyard or cafeteria, grab some “eggz” (theft/ stealing), ditch day, flip off the front office, and spray a neighbor’s fence.

School officials say their goal is to open a transparent conversation and bring awareness to the situation.

“We encourage you to take this opportunity to speak to your student(s) about the appropriate and respectful use of social media and cell phones,” the letter states. “Being socially responsible, kind, and mindful on these platforms is becoming increasingly important.”

Bradley Central Principal Mark Kohl said he has never in his 11 years as principal seen bathroom vandalism to this extent.

He noted that the school has not had issues with attempts at other challenges on the list, but students have informed the administration about the monthly themes being shared on the app.

Just this week, the school had to shut down two of its bathrooms due to vandalism.

“It’s frustrating for sure as a building principal to deal with this,” Kohl said.

Fortunately, students have been good about reporting incidents when they see them occur, he said.

The school has been asking teachers to monitor bathrooms and keep track of when students leave to use the bathroom so there is a record when an incident occurs. Hallway security footage also gets reviewed.

Bathroom doors are being left open during passing periods, and some bathrooms are staying closed, neither of which the school has ever had to do before.

Kohl said that since sending the letter to parents last week, he has gotten emails from multiple parents thanking the school for informing them of what was going on.

“A lot of them aren’t even aware of the situation because their child is doing what’s right in school,” he said. “But parents are aware now. They can have conversations with their kids.”

Kohl said he brought all 160 eighth-graders down to the auditorium for a talk about responsibility and doing the right thing at school.

The school has also used the concept of “restorative justice” in some instances when students were caught in the act.

The students’ parents were consulted and agreed that the students would have to clean the bathrooms they messed up instead of the traditional detention or in-school suspension as punishment.

“A lot of our students, they are starving for attention at this age. They really want that attention, whether it’s negative or positive attention,” Kohl said. “That negative peer pressure is real and it happens in all facets of middle school. … I think we have a pretty good grasp on it now, we just need to continue to educate our kids on doing what’s right.”

Recently, there has been a series of monthly “challenges'' that have surfaced and are spreading nationwide on the popular social media platform, TikTok. Below is a list of challenges that two local school districts provided to parents.

• Mess up a toilet/vandalize a restroom

• Smack a staff member on the backside

• Kiss your friend’s girlfriend at school

• Show your genitals in school halls

• Make a mess in the courtyard or cafeteria

The program creates an incentive for residents, businesses, nonprofits and religious institutions to purchase and install security cameras that are intended to help deter crime and assist law enforcement with investigations, according to a press release. The program, which offers rebates for the purchase of security cameras, is open to any Kankakee resident and business, and operates as a reimbursement.

Access to the camera by the police department can only be given voluntarily by the owner, according to a press release. There is no camera registration required and all information shared through the program will be kept confidential, the city says.

Curtis said the program is a component of the city’s public safety strategy.

“It assists in the stabilization and revitalization of our neighborhoods and commercial corridors,” he said. “It is also exciting that this comes at no cost to the taxpayers and is funded by city businesses looking to give back and help the City of Kankakee rise.”

HOPKINS PARK — A proposed housing development in Pembroke Township that includes retail, commercial and entertainment will be up for discussion at Thursday’s Hopkins Park board meeting.

Antonio Givens is looking to build a $9.2 million housing/retail development on a 5-acre plot of land he owns on East 13000South Road about a quarter-mile south of Hopkins Park’s village limits.

The Chicago resident is the owner of Ernest Givens Development, which is named after his late father.

He said he plans to attend Thursday’s meeting.

“I will listen to what is said,” Givens said. “I want to make a difference in the community.”

The development would have 31 townhomes, each with three bedrooms, two bathrooms and a two-car garage.

Of the 31 townhomes, 20 percent (six units) would be dedicated to low-income subsidized housing.

The development — which Givens said would be solar-powered — would also include a community center, a small bank, restaurant and retail store. Givens, 39, says he has secured a loan and federal grants to finance the project.

Hopkins Park Mayor Mark Hodge said he would like to see the development built but on the east side of the village. He has in mind the former site of a prison that the state pulled the plug on due to the state’s budget troubles nearly 20 years ago. The village is leasing the 137-acre site, which already has sewer and water service, from the state.

Hodge said discussion of Givens’ proposed development would take place during the “Mayor’s Remarks” portion of the meeting.

“Before that, I have to see if the trustees would like to move forward,” Hodge said. “If so, then we need to contact [Illinois Department of Corrections] to see what we can do with the land, and if we can build on it.

“Nothing has been approved or disapproved at this point.”

Some village residents have stated concerns about infrastructure, saying they would like the board to address problems with the sewer system.

What: Hopkins Park board meeting

Coronavirus-local
Pritzker hopes his mask mandate ends before the holidays

As COVID-19 transmission rates fall in Illinois, Gov. JB Pritzker said Tuesday that his mask mandate may come to an end before the holidays.

At a press briefing, Pritzker said lifting the mask mandate before Thanksgiving is an important marker for his administration.

“We have three holidays coming up, especially Thanksgiving and Christmas, where people spend extended amounts of time together, so we would like very much to get to a place where we can remove certain mask mandates,” Pritzker said.

Pritzker did not offer any specific metrics the state will use to determine when to lift the mask mandate. The statewide mandate has been in place since Aug. 30 and requires people to wear a mask in indoor public places, regardless of their vaccination status.

At the time the mandate was issued, Pritzker pointed to the recommendation from the Centers for Disease Control and Prevention that people wear masks indoors in areas of “substantial” or “high” coronavirus transmission.

As of Tuesday, all 102 counties in Illinois are classified as substantial- or high-transmission areas, according to the CDC. There were two areas of “moderate” transmission, both of which are located downstate.

State health officials on Tuesday reported 2,071 new confirmed and probable cases of COVID-19. That’s up from Monday’s 1,327 cases, which was the lowest one-day total since July 26.

Also, the state is making a push for those 65 and older and other vulnerable residents to get booster shots of the COVID-19 vaccines.

IDPH is partnering with the Illinois Emergency Management Agency and the Illinois Department on Aging to increase education around boosters and provide support to skilled nursing facilities as they work to administer boosters to residents.

“AARP Illinois urges all eligible residents to get vaccines and booster shots to ensure they stay protected from the deadly coronavirus and put an end to this pandemic once and for all,” AARP Illinois President Bob Gallo said.

The CDC recommended a booster shot for the Pfizer vaccine on September 23. The CDC is set to review booster recommendations for the Moderna and Johnson & Johnson vaccines this week.

As of Oct. 12, IDPH reported 18% of Illinois residents aged 65 and older had received a booster shot.