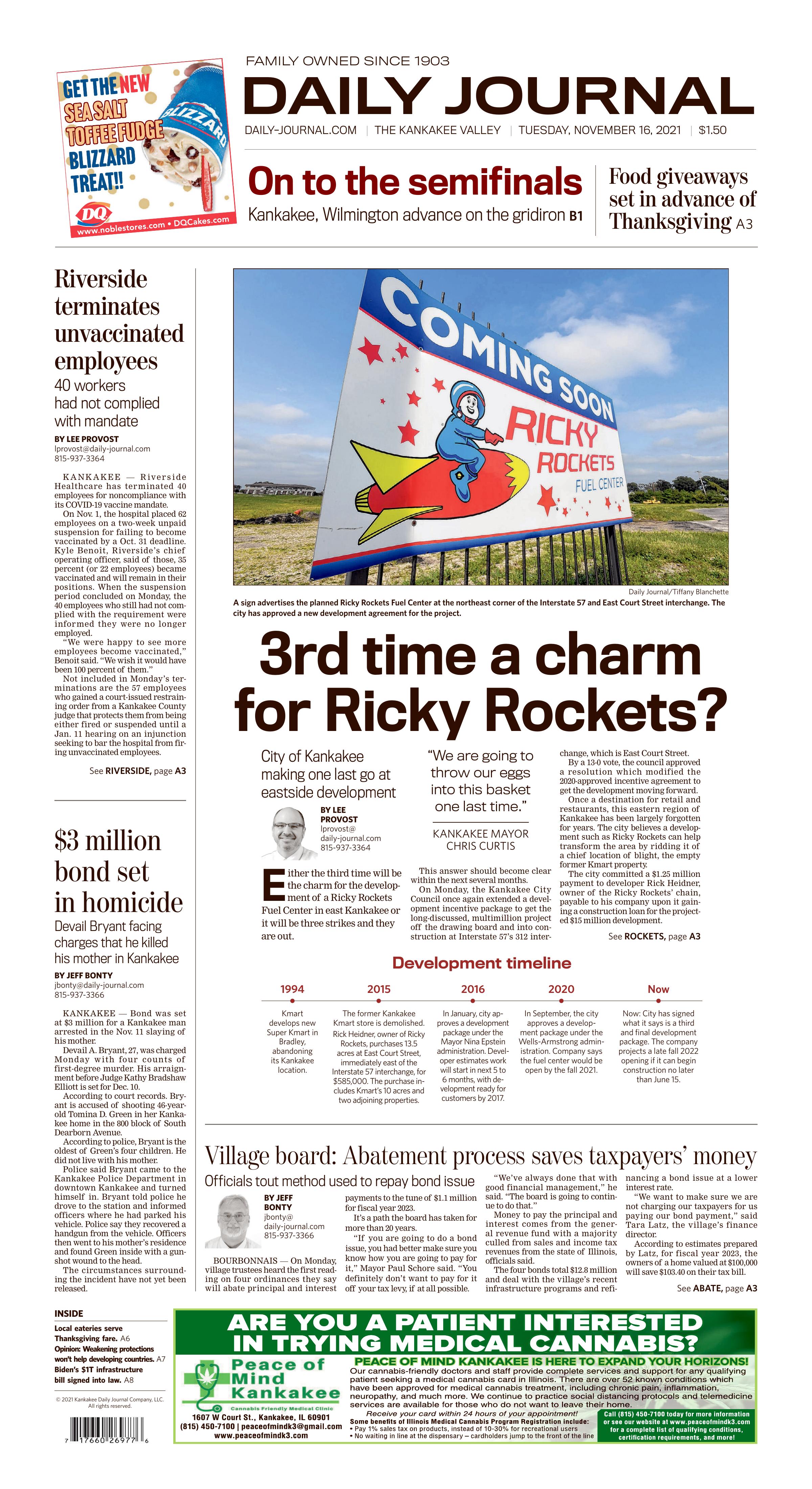 A sign advertises the planned Ricky Rockets Fuel Center at the northeast corner of the Interstate 57 and East Court Street interchange. The city has approved a new development agreement for the project.

KANKAKEE — Either the third time will be the charm for the development of a Ricky Rockets Fuel Center in east Kankakee or it will be three strikes and they are out.

This answer should become clear within the next several months.

On Monday, the Kankakee City Council once again extended a development incentive package to get the long-discussed, multimillion project off the drawing board and into construction at Interstate 57’s 312 interchange, which is East Court Street.

By a 13-0 vote, the council approved a resolution which modified the 2020-approved incentive agreement to get the development moving forward.

Once a destination for retail and restaurants, this eastern region of Kankakee has been largely forgotten for years. The city believes a development such as Ricky Rockets can help transform the area by ridding it of a chief location of blight, the empty former Kmart property.

The city committed a $1.25 million payment to developer Rick Heidner, owner of the Ricky Rockets’ chain, payable to his company upon it gaining a construction loan for the projected $15 million development.

The city would contribute another $250,000 to Heidner once the development gains an occupancy permit.

The company projects a late fall opening if it can begin construction no later than June 15.

The city is not committed to any sharing of real estate, gaming or sales taxes. Based upon the potential of the location having a truck stop, restaurant and convenience-type store, the site could have up to 22 gaming stations.

“We are going to throw our eggs into this basket one last time,” Curtis said.

Curtis said he met with Heidner only three days after being sworn into office in May. He said Heidner still had great interest in Kankakee and since some of Heidner’s other projects were nearing completion, more attention could be devoted to this development.

Carl Brown, an alderman in the 7th Ward — where the project will be based — said this can has been kicked down the road long enough.

If the project does not begin by June 15, the city’s penalizes the developer by deducting $50,000 from the incentive package. This deduction would repeat itself every 30 days until construction begins.

The city administration only modified the development agreement it had with Heidner from the Mayor Chasity Wells-Armstrong administration.

Curtis said the project remains critical to Kankakee’s eastern entrance being significantly upgraded. The several-acre lot has been in a state of blight since Kmart closed its 104,000-square-foot store in 1994.

When the second incentive package was approved by the city council in September 2020, the company said the fuel center would be open by the fall 2021.

To date, not one ounce of concrete has been poured to begin construction at the site.

Initially announced as a $12 million to $13 million development, the project’s value was increased to $20 million in late 2020. The project is now expected to require an investment of $15 million.

"We are going to throw our eggs into this basket one last time."

2016: In January, city approves a development package under the Mayor Nina Epstein administration. Developer estimates work will start in next 5 to 6 months, with development ready for customers by early 2017.

2020: In September, the city approves a development package under the Wells-Armstrong administration. Company says the fuel center would be open by the fall 2021.

Now: City has signed what it says is a third and final development package. The company projects a late fall 2022 opening if it can begin construction no later than June 15.

BOURBONNAIS — On Monday, village trustees heard the first reading on four ordinances they say will abate principal and interest payments to the tune of $1.1 million for fiscal year 2023.

It’s a path the board has taken for more than 20 years.

“We’ve always done that with good financial management,” he said. “The board is going to continue to do that.”

Money to pay the principal and interest comes from the general revenue fund with a majority culled from sales and income tax revenues from the state of Illinois, officials said.

The four bonds total $12.8 million and deal with the village’s recent infrastructure programs and refinancing a bond issue at a lower interest rate.

“We want to make sure we are not charging our taxpayers for us paying our bond payment,” said Tara Latz, the village’s finance director.

The village’s portion of a resident’s property tax bill amounts to about 5 percent, Schore said.

Trustees heard the first reading of an ordinance setting the tax levy rate at $1.7 million for fiscal year 2022. It is about $84,000 more than last year, Latz said, adding the village is requesting a tax rate of .4703 on a resident’s tax bill they will receive in May 2022.

If a homeowner’s property value stays the same as last year, their contribution to the village’s property taxes will stay the same.

“We’re a growing community,” she said. “However, that is merely a factor from [Equalized Assessed Value]. The EAV of the entire village continues to rise each year, which we are thankful for.”

The EAV number is the result of a process applying increases and decreases to assessed values in a jurisdiction area to create a total property value.

KANKAKEE — Riverside Healthcare has terminated 40 employees for noncompliance with its COVID-19 vaccine mandate.

On Nov. 1, the hospital placed 62 employees on a two-week unpaid suspension for failing to become vaccinated by a Oct. 31 deadline. Kyle Benoît, Riverside’s chief operating officer, said of those, 35 percent (or 22 employees) became vaccinated and will remain in their positions. When the suspension period concluded on Monday, the 40 employees who still had not complied with the requirement were informed they were no longer employed.

“We were happy to see more employees become vaccinated,” Benoit said. “We wish it would have been 100 percent of them.”

Not included in Monday’s terminations are the 57 employees who gained a court-issued restraining order from a Kankakee County judge that protects them from being either fired or suspended until a Jan. 11 hearing on an injunction seeking to bar the hospital from firing unvaccinated employees.

That number now stands at 56 as one of the employees covered by the order has voluntarily left her position at the hospital.

The employees are required to follow the same strict safety protocols as those who gained religious/strongly held beliefs or medical exemptions. Any employee denied an exemption by a review panel was required to become vaccinated or face termination.

When the Oct. 31 deadline was reached, the hospital administration said 97 percent of its 2,900-person workforce had been vaccinated.

Editor's note: This story was updated to correct that Tomina D. Green was the mother of three children.

KANKAKEE — Bond was set at $3 million for a Kankakee man arrested in the Nov. 11 slaying of his mother.

Devail A. Bryant, 27, was charged Monday with four counts of first-degree murder. His arraignment before Judge Kathy Bradshaw Elliott is set for Dec. 10.

According to court records. Bryant is accused of shooting 46-year-old Tomina D. Green in her Kankakee home in the 800 block of South Dearborn Avenue.

According to police, Bryant is the oldest of Green’s three children. He did not live with his mother.

Police said Bryant came to the Kankakee Police Department in downtown Kankakee and turned himself in. Bryant told police he drove to the station and informed officers where he had parked his vehicle. Police say they recovered a handgun from the vehicle. Officers then went to his mother’s residence and found Green inside with a gunshot wound to the head.

The circumstances surrounding the incident have not yet been released.