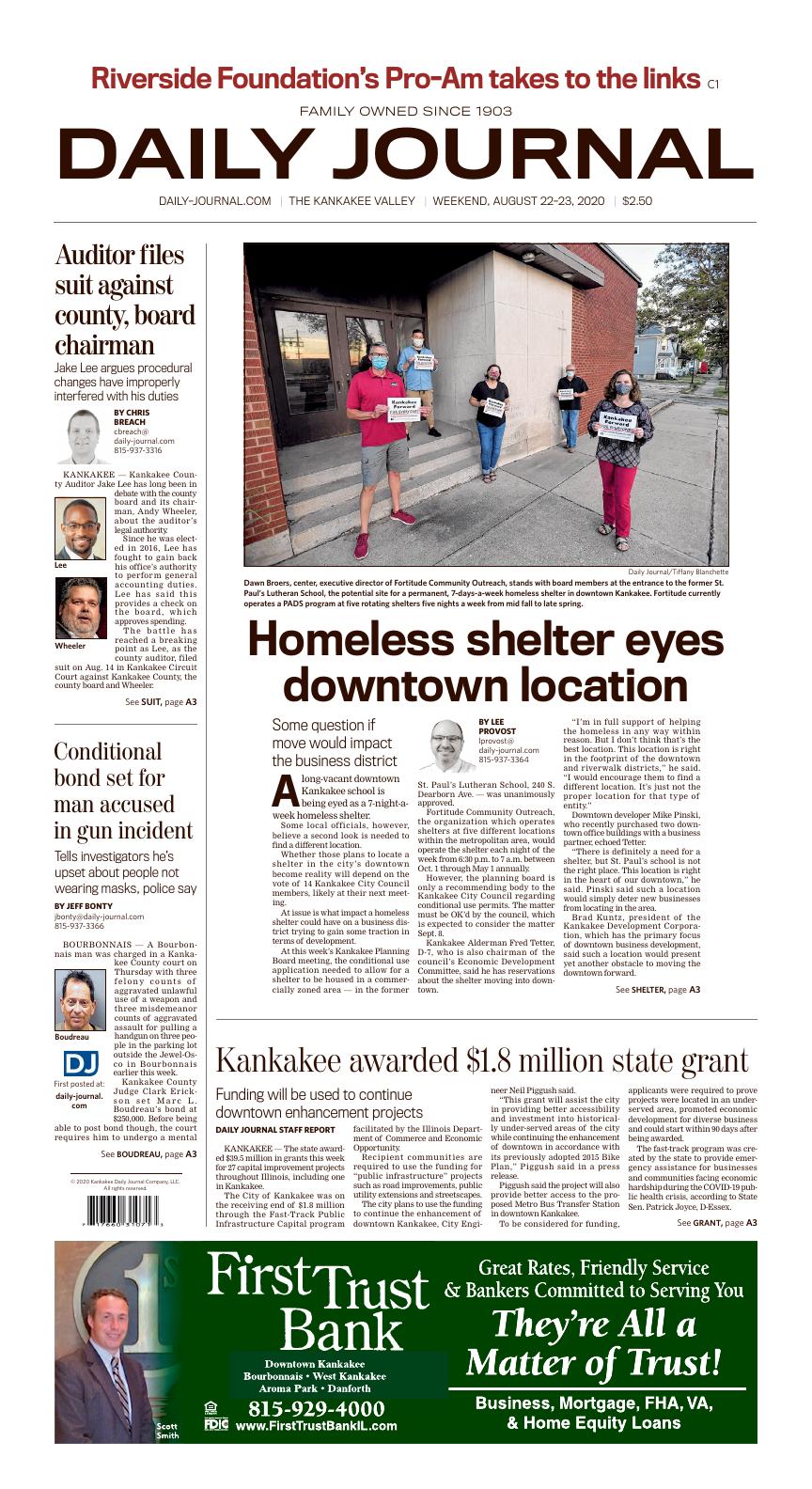 KANKAKEE — A long-vacant downtown Kankakee school is being eyed as a 7-night-a-week homeless shelter.

Some local officials, however, believe a second look is needed to find a different location.

Whether those plans to locate a shelter in the city’s downtown become reality will depend on the vote of 14 Kankakee City Council members, likely at their next meeting.

At issue is what impact a homeless shelter could have on a business district trying to gain some traction in terms of development.

At this week’s Kankakee Planning Board meeting, the conditional use application needed to allow for a shelter to be housed in a commercially zoned area — in the former St. Paul’s Lutheran School, 240 S. Dearborn Ave. — was unanimously approved.

Fortitude Community Outreach, the organization which operates shelters at five different locations within the metropolitan area, would operate the shelter each night of the week from 6:30 p.m. to 7 a.m. between Oct. 1 through May 1 annually.

However, the planning board is only a recommending body to the Kankakee City Council regarding conditional use permits. The matter must be OK’d by the council, which is expected to consider the matter Sept. 8.

Kankakee Alderman Fred Tetter, D-7, who is also chairman of the council’s Economic Development Committee, said he has reservations about the shelter moving into downtown.

“I’m in full support of helping the homeless in any way within reason. But I don’t think that’s the best location. This location is right in the footprint of the downtown and riverwalk districts,” he said. “I would encourage them to find a different location. It’s just not the proper location for that type of entity.”

“There is definitely a need for a shelter, but St. Paul’s school is not the right place. This location is right in the heart of our downtown,” he said. Pinski said such a location would simply deter new businesses from locating in the area.

Brad Kuntz, president of the Kankakee Development Corporation, which has the primary focus of downtown business development, said such a location would present yet another obstacle to moving the downtown forward.

He said the KDC would be reaching out to city leadership regarding its concerns.

Currently, Fortitude operates a PADS program — meaning not a permanent locations for its overnight shelter — at five rotating shelters five nights a week.

The 27,550-square-foot former school would offer the Fortitude a permanent location and one centrally located for the majority of individuals it helps. The location would provide a place for up to 17 people to eat dinner and breakfast and sleep, said Dawn Broers, Fortitudes executive director.

The site would house about 18 people per night, mostly men. The number would be similar to the total being housed in the PADS program.

Broers said Fortitude and St. Paul’s have been having discussions about this site since March. She said on July 25, the church board approved the agreement with Fortitude.

“All our services would be here. This site makes sense,” she said. Broers conceded the organization has no other shelter site in mind.

“If there was a better possibility, we would be looking at it,” she said.

“Improving care for homeless is part of the Kankakee Forward program,” she said. She added that meeting the needs of all members of the community makes Kankakee stronger.

St. Paul’s would maintain ownership of the property.

While only those supporting Fortitude, the not-for-profit social service agencies incorporated in April 2018, addressed the planning board on Tuesday, business and political leadership within the downtown area, largely located in the 2nd Ward, have expressed reservations regarding the operation of a shelter here.

At a meeting held the previous week where city municipal and business leaders discussed Fortitude’s plans, there was not overwhelming support, according to planning board documents.

Stacy Gall, who represents the 2nd Ward along with Mike O’Brien, stated that while she appreciates St. Paul’s stepping forward and offering its location for a shelter, she has concerns the facility could be a problem in this key location — located directly east of the Farmer’s Market area.

“I certainly support what Fortitude is doing. But there is more homework to be done on this matter. We’re trying to develop downtown. Is this good or bad for that development?” he asked.

St. Paul’s has not operated the school in this location for more than 40 years. In 1976, the church opened its new school at 1580 Butterfield Court in west Kankakee. In 2009, St. Paul’s opened a new school site at 1780 Career Center Road in Bourbonnais.

KANKAKEE — The state awarded $39.5 million in grants this week for 27 capital improvement projects throughout Illinois, including one in Kankakee.

The City of Kankakee was on the receiving end of $1.8 million through the Fast-Track Public Infrastructure Capital program facilitated by the Illinois Department of Commerce and Economic Opportunity.

Recipient communities are required to use the funding for “public infrastructure” projects such as road improvements, public utility extensions and streetscapes.

The city plans to use the funding to continue the enhancement of downtown Kankakee, City Engineer Neil Piggush said.

“This grant will assist the city in providing better accessibility and investment into historically under-served areas of the city while continuing the enhancement of downtown in accordance with its previously adopted 2015 Bike Plan,” Piggush said in a press release.

To be considered for funding, applicants were required to prove projects were located in an under-served area, promoted economic development for diverse business and could start within 90 days after being awarded.

The fast-track program was created by the state to provide emergency assistance for businesses and communities facing economic hardship during the COVID-19 public health crisis, according to State Sen. Patrick Joyce, D-Essex.

“It’s critical that we continue to update our infrastructure to meet the needs of our residents,” Joyce said. “Making streets more accessible is a vital step toward improving safety and mobility in our community.”

The program is funded through a portion of the $45 billion Rebuild Illinois program that state lawmakers approved in 2019.

“Investment aimed toward building modern infrastructure and fostering stronger and better-connected communities are at the center of our historic $45 billion capital plan,” Gov. JB Pritzker said. “While COVID-19 continues to present extraordinary economic challenges, our planned infrastructure projects should not have to wait.”

Kankakee Mayor Chasity Wells-Armstrong said she was appreciative for Pritzker’s prioritization of capital funds during the pandemic.

“Not only do these funds support infrastructure projects, but they create jobs,” she said.

DCEO’s acting director Michael Negron said there is a strong connection between infrastructure and economic development.

“Infrastructure is an enabler of economic development,” he said.

Wells-Armstrong thanked Piggush for leading the team that prepared the grant application and the DCEO “for believing in our vision.”

KANKAKEE — Kankakee County Auditor Jake Lee has long been in debate with the county board and its chairman, Andy Wheeler, about the auditor’s legal authority.

Since he was elected in 2016, Lee has fought to gain back his office’s authority to perform general accounting duties. Lee has said this provides a check on the board, which approves spending.

The battle has reached a breaking point as Lee, as the county auditor, filed suit on Aug. 14 in Kankakee Circuit Court against Kankakee County, the county board and Wheeler.

The complaint asks for the “court’s intervention to declare the present financial policies of the county to be in contravention of the law, to establish that the office of auditor is being improperly interfered with and effectively occupied by other county officials, and otherwise cease the interference with plaintiff executing the lawful duties and obligations of the Kankakee County auditor.”

In 2003 the county split the auditor and finance departments because it said the federal government required more checks and balances. If the county violated the federal directive, it would have jeopardized millions in grants, Wheeler told the Daily Journal in 2019.

In his complaint, Lee also contends, “the defendants have interfered with the ability of Plaintiff to operate as the ‘general accountant’ and ‘keeper of accounts’ without providing (or having) any expressed legal basis, and are openly refusing to allow him to perform his statutory duties.”

Also in the complaint, Lee says the board’s creation of the finance department on Oct. 14, 2003, was ‘vague’ and the separating of the auditor and finance departments acts to “segregate” their duties. Steve McCarty is the current finance director for Kankakee County.

Further, the lawsuit contends, “It is not lawful to separate the duties of an elected official and transfer them to a newly created appointed office, in this case the Finance Department. As such, this Resolution must be declared void.”

In March 2019 Wheeler supported a bill in the state Legislature, introduced by state Rep. Tom Bennett, R-Gibson City, that would make it optional for counties to have auditors handle accounting duties. The proposal never gained enough support in the Legislature to gain passage. With its failure, the accounting responsibilities were to transfer back to the auditor on Dec. 1, 2019.

Wheeler declined to comment further on the lawsuit other than to say, “The county will be making a statement by our attorney at the next county board meeting.”

That meeting is Sept. 8.

Kankakee County Judge Clark Erickson set Marc L. Boudreau’s bond at $250,000. Before being able to post bond though, the court requires him to undergo a mental evaluation as Boudreau told investigators that his head is “screwed up.” If he passes the evaluation, he will be allowed to post bail at 10 percent but be ordered to pretrial service supervision with the county’s probation department.

Boudreau is also not to have any contact with the victims or come within 100 feet of the store.

Boudreau’s next court date is Sept. 3.

Bourbonnais police said the 60-year-old Boudreau encountered a man and two women at the store who were not wearing masks on Tuesday.

Kankakee County State’s Attorney Jim Rowe said Boudreau waited outside and confronted them, asking them why they were not wearing masks inside.

Rowe said per a police report, one of the victims told Boudreau that they did not have to wear a mask.

Standing 6 feet away from the victims, Boudreau then pulled a Glock semi automatic handgun and chambered a bullet, Rowe said. Boudreau asked them “how would you like to get shot in the head?”

Boudreau has a valid FOID card and concealed carry permit.

According to Rowe, Boudreau told investigators he was upset that people are not wearing masks.

Bourbonnais officers responded to the parking lot at 10:46 p.m. Tuesday after KanComm dispatch received a call about a person threatening to shoot them.

Officers arrived and saw two vehicles leaving the parking lot. They stopped both.

The three victims were in one vehicle, while Boudreau was the driver of the second.

In 1998, Boudreau pleaded guilty to illegal possession of a firearm. He received conditional discharge (non-reporting probation).

Rowe said Boudreau failed and was resentenced to probation, which terminated in July 1999. 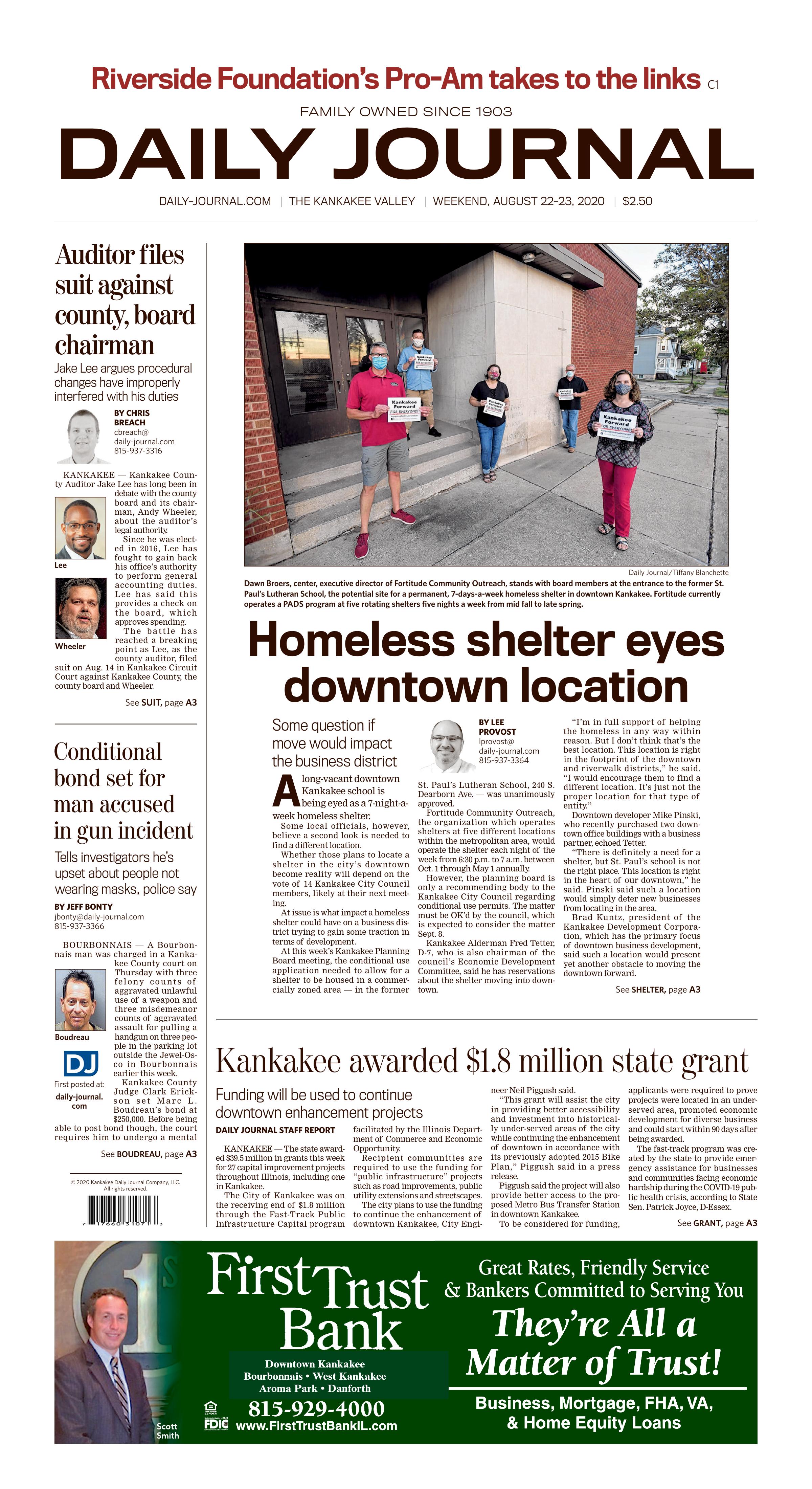