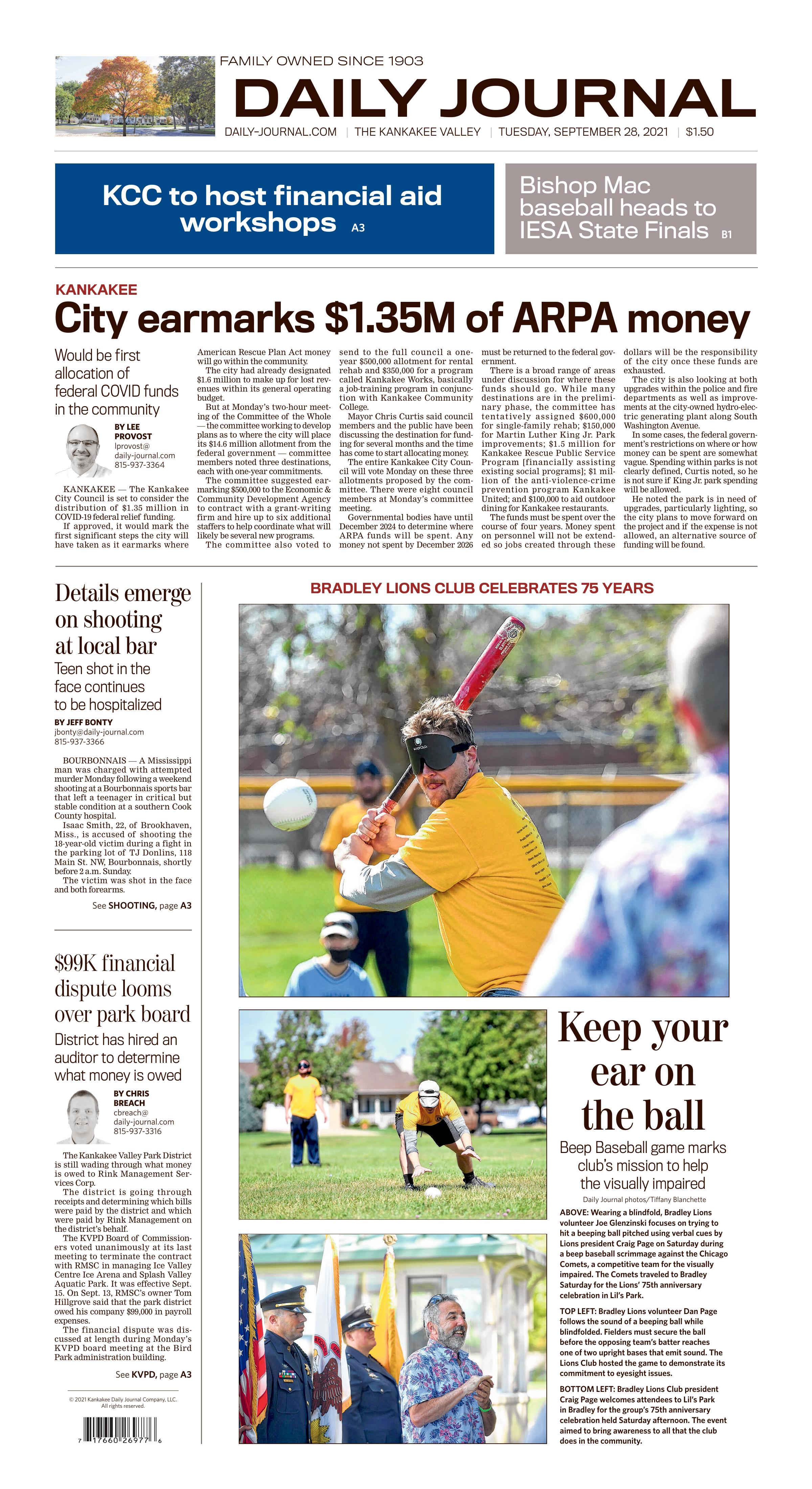 KANKAKEE — The Kankakee City Council is set to consider the distribution of $1.35 million in COVID-19 federal relief funding.

If approved, it would mark the first significant steps the city will have taken as it earmarks where American Rescue Plan Act money will go within the community.

The city had already designated $1.6 million to make up for lost revenues within its general operating budget.

But at Monday’s two-hour meeting of the Committee of the Whole — the committee working to develop plans as to where the city will place its $14.6 million allotment from the federal government — committee members noted three destinations, each with one-year commitments.

The committee suggested earmarking $500,000 to the Economic & Community Development Agency to contract with a grant-writing firm and hire up to six additional staffers to help coordinate what will likely be several new programs.

The committee also voted to send to the full council a one-year $500,000 allotment for rental rehab and $350,000 for a program called Kankakee Works, basically a job-training program in conjunction with Kankakee Community College.

Mayor Chris Curtis said council members and the public have been discussing the destination for funding for several months and the time has come to start allocating money.

The entire Kankakee City Council will vote Monday on these three allotments proposed by the committee. There were eight council members at Monday’s committee meeting.

Governmental bodies have until December 2024 to determine where ARPA funds will be spent. Any money not spent by December 2026 must be returned to the federal government.

There is a broad range of areas under discussion for where these funds should go. While many destinations are in the preliminary phase, the committee has tentatively assigned $600,000 for single-family rehab; $150,000 for Martin Luther King Jr. Park improvements; $1.5 million for Kankakee Rescue Public Service Program [financially assisting existing social programs]; $1 million of the anti-violence-crime prevention program Kankakee United; and $100,000 to aid outdoor dining for Kankakee restaurants.

The funds must be spent over the course of four years. Money spent on personnel will not be extended so jobs created through these dollars will be the responsibility of the city once these funds are exhausted.

The city is also looking at both upgrades within the police and fire departments as well as improvements at the city-owned hydro-electric generating plant along South Washington Avenue.

In some cases, the federal government’s restrictions on where or how money can be spent are somewhat vague. Spending within parks is not clearly defined, Curtis noted, so he is not sure if King Jr. park spending will be allowed.

He noted the park is in need of upgrades, particularly lighting, so the city plans to move forward on the project and if the expense is not allowed, an alternative source of funding will be found.

Crime
Man charged with attempted murder in shooting at bar

BOURBONNAIS — A Mississippi man was charged with attempted murder Monday following a weekend shooting at a Bourbonnais sports bar that left a teenager in critical but stable condition at a southern Cook County hospital.

Isaac Smith, 22, of Brookhaven, Miss., is accused of shooting the 18-year-old victim during a fight in the parking lot of TJ Donlins, 118 Main St. NW, Bourbonnais, shortly before 2 a.m. Sunday.

The victim was shot in the face and both forearms.

According to police, video from the bar showed Isaac Smith, his cousin, Dajon M. Smith, 24, of Bradley, another male and a female walking to their vehicle after leaving the bar when two vehicles approached. Occupants exited both vehicles and a fight broke out. After punches were exchanged by two men, according to police, Isacc Smith fired a weapon three times, striking the teen.

The Smiths and their two companions then fled the scene, according to police. An officer stopped their vehicle in the 300 block of South Schuyler Avenue in Kankakee. All four people were arrested and taken to Jerome Combs Detention Center.

Dajon Smith is also facing a charge of mob action. Elliott set his bond at $5,000.

The two others have not been charged by the Kankakee County State’s Attorney’s office.

The Kankakee Valley Park District is still wading through what money is owed to Rink Management Services Corp.

The KVPD Board of Commissioners voted unanimously at its last meeting to terminate the contract with RMSC in managing Ice Valley Centre Ice Arena and Splash Valley Aquatic Park. It was effective Sept. 15. On Sept. 13, RMSC’s owner Tom Hillgrove said that the park district owed his company $99,000 in payroll expenses.

The financial dispute was discussed at length during Monday’s KVPD board meeting at the Bird Park administration building.

Dayna Heitz, executive director of KVPD, said the district would pay RMSC any money it is owed by Oct. 15.

Board member Bill Spriggs asked why is there a discrepancy. Heitz said there’s a lot more to it than just the payroll expenses, and the auditors are trying to figure it out.

“We paid for this, they paid for that,” Heitz said. “We’re collecting the revenue from the credit card and then transferring, and that is a lag time. We’re always a month behind with that. There’s a lot of different aspects that are going into these financials.

“[Hillgrove] is stating specifically that we owe him $99,000 for April,” she said. “Payroll is an element to the financials as a whole. So we do not know what we do owe or do not owe at this point.”

The park district has hired the accounting firm Lauterbach & Amen LLC, of Naperville, to do an audit.

Board member Don Palmer, who is a CPA, said he’s seeing a lot of noise around the transactions.

“I just want to be straight up,” he said. “... I’m seeing deficiencies on both sides. I’m just going to call it like that.”

Heitz said she didn’t disagree with him on the matter.

“Once the report is done before the 30 days are up, you’ll get a clearer picture,” he said of the timeframe the district gave to resolve any outstanding payments to RMSC.

The board will incur a yet-to-be-determined cost for Lauterbach & Amen to do the audit.

“I have no idea how much time they’re going to put in,” said David Freeman, park district attorney. “I can only guess that this is going to be a fairly significant project for them to get all this information from April to date and put it all together. We’ll have a little bit of additional legal fees, but it’s not going to be substantial.

“It’s gonna be Lauterbach & Amen that is going to be the wild card here. ... I’m sure it’s going to be a lot of work for them to put this together, to do an effective, complete audit within 30 days of all of this information.”

Heitz said she would have a full status report for the board by the next meeting on Oct. 25