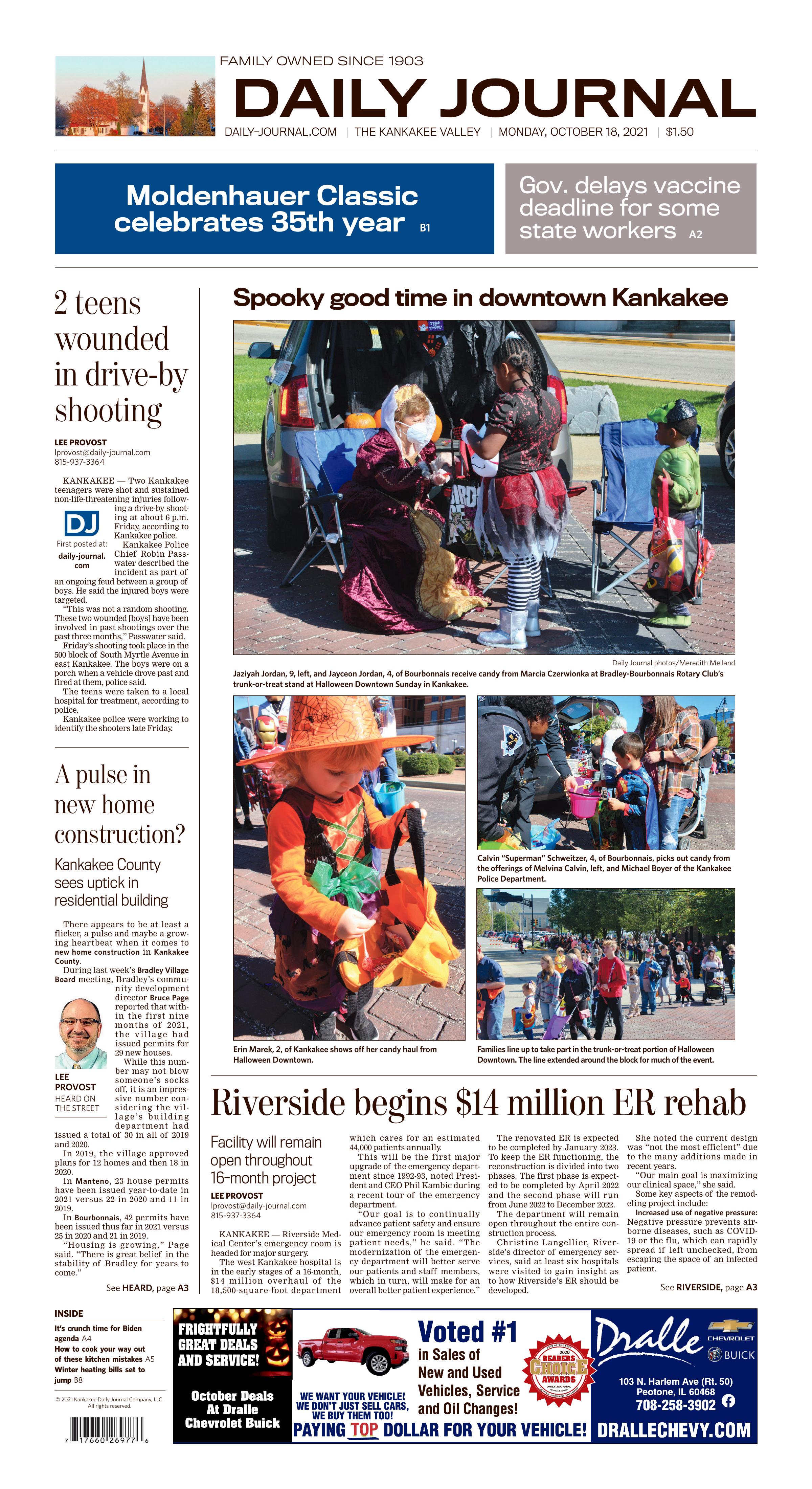 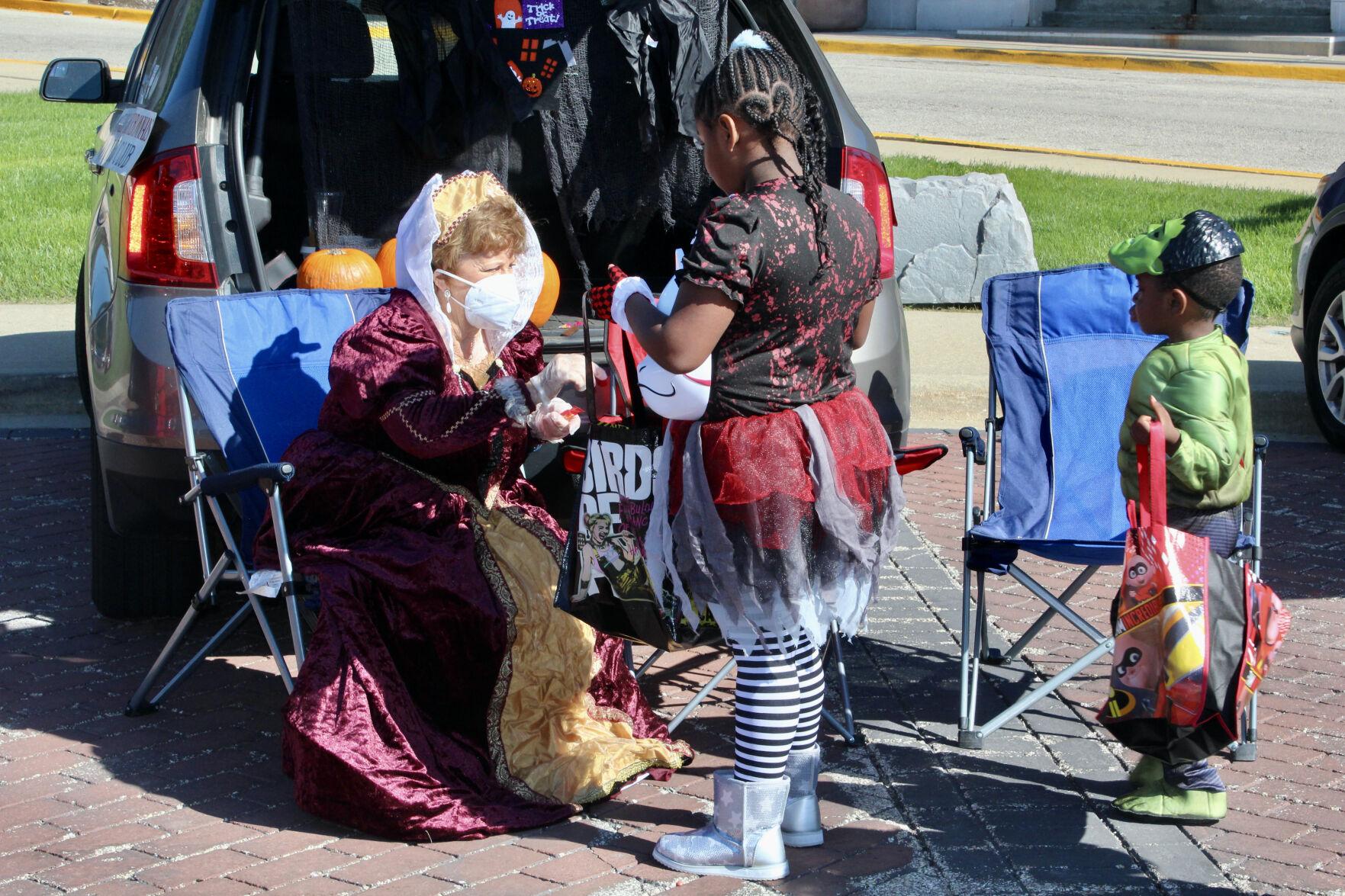 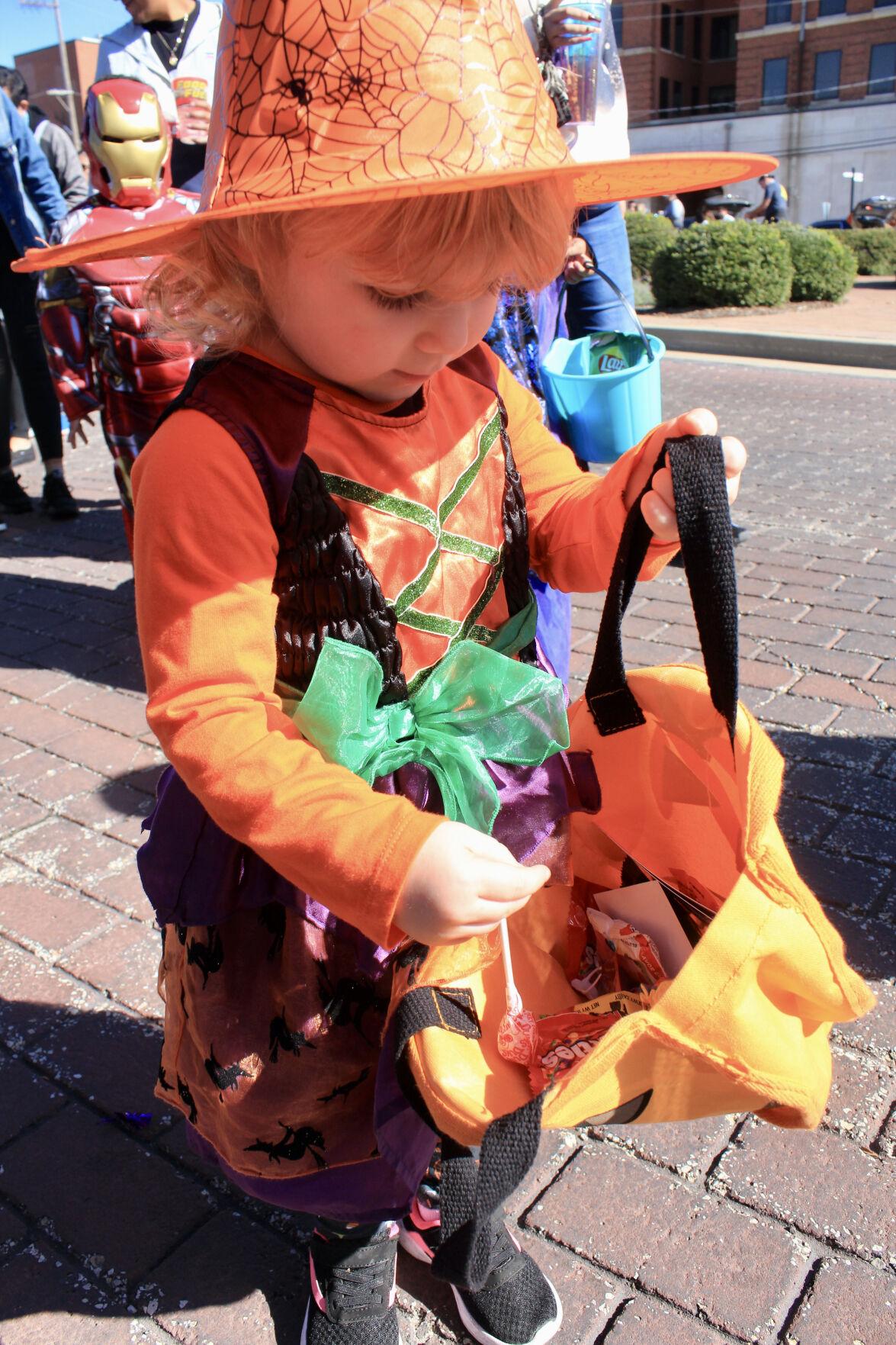 Erin Marek, 2, of Kankakee shows off her candy haul from Halloween Downtown.

An employee walks toward the Riverside Medical Center emergency room entrance, which will undergo a 16-month, $14 million renovation project.

Kyle Benoit, Riverside Healthcare's senior vice president and COO, gives a tour of an existing space that will serve as part of the hospital's new emergency department following a $14 million renovation project.

The west Kankakee hospital is in the early stages of a 16-month, $14 million overhaul of the 18,500-square-foot department which cares for an estimated 44,000 patients annually.

“Our goal is to continually advance patient safety and ensure our emergency room is meeting patient needs,” he said. “The modernization of the emergency department will better serve our patients and staff members, which in turn, will make for an overall better patient experience.”

The department will remain open throughout the entire construction process.

Christine Langellier, Riverside’s director of emergency services, said at least six hospitals were visited to gain insight as to how Riverside’s ER should be developed.

She noted the current design was “not the most efficient” due to the many additions made in recent years.

“Our main goal is maximizing our clinical space,” she said.

Some key aspects of the remodeling project include:

Increased use of negative pressure: Negative pressure prevents airborne diseases, such as COVID-19 or the flu, which can rapidly spread if left unchecked, from escaping the space of an infected patient.

All 34 of the patient emergency rooms will have negative pressure capabilities.

Improve treatment spaces: The new layout will include six rapid treatment spaces to help lower wait times for patients. The department currently has two such rooms. These spaces provide opportunities for less extreme cases to be treated in a quicker fashion.

Additionally, the new emergency department will offer two trauma rooms. The ER currently has one. This design will allow the 140-member ER to continue to serve the area as a Level II Trauma Center and treat severe cases more quickly.

More behavioral health rooms: In looking at the needs of the community, it became essential to Riverside that the safety of emergency patients with behavioral health concerns was critical. The new department will provide a secure area for these patients, allowing staff the flexibility to convert from treating physical ailments to behavioral concerns.

Enhanced privacy: “We want to make sure patients are as comfortable as possible and privacy is a significant part of a patient’s level of comfortability,” Kambic said. “This remodel allows us to improve the privacy patients and their loved ones experience throughout their entire experience in the emergency department.”

Technology: New technology in the emergency department will play an increased role in patient safety and monitoring. A new command central will allow physicians and nurses to monitor patient safety through video and respond to department needs quickly and efficiently. 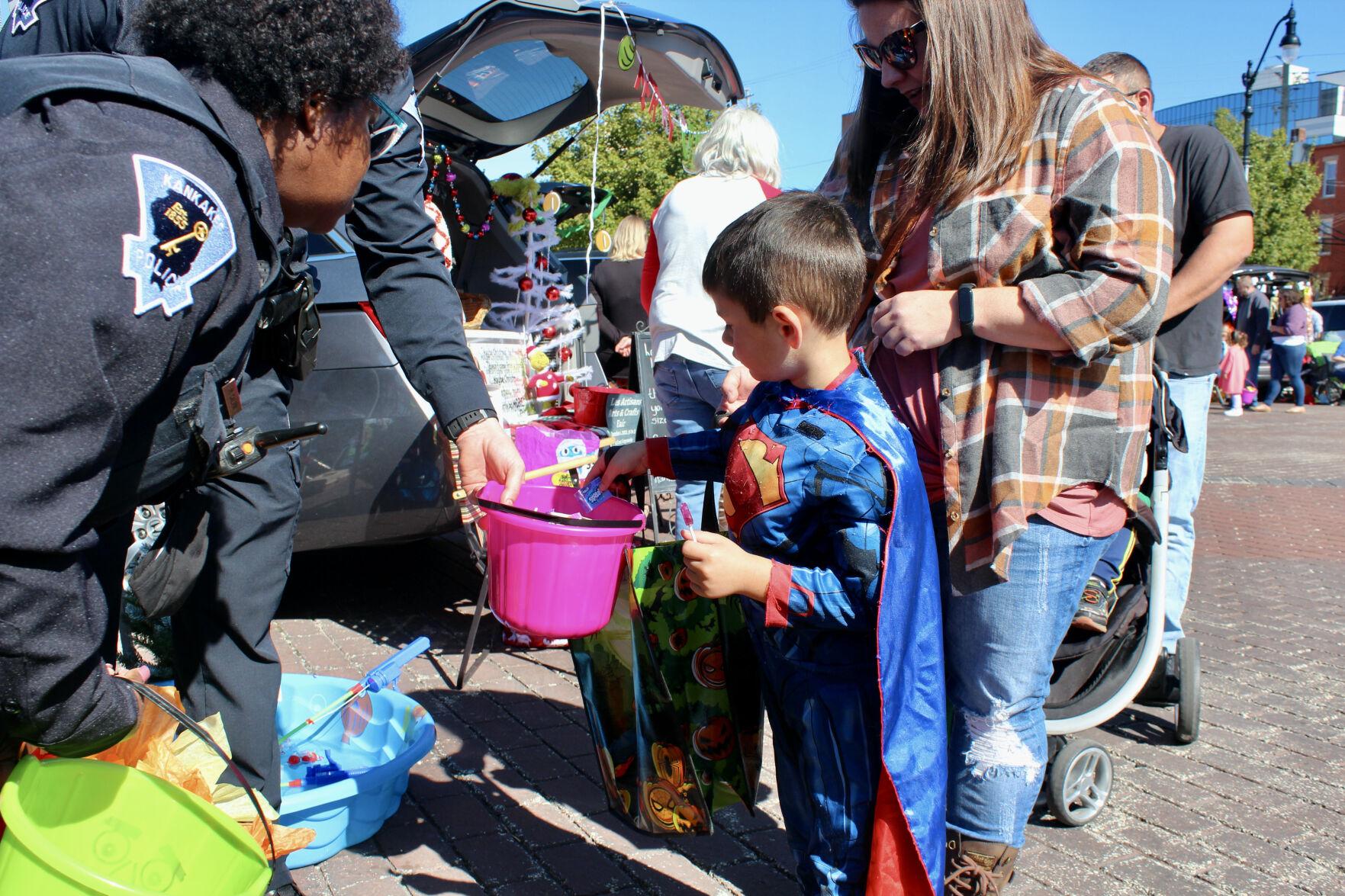 Calvin “Superman” Schweitzer, 4, of Bourbonnais, picks out candy from the offerings of Melvina Calvin, left, and Michael Boyer of the Kankakee Police Department. 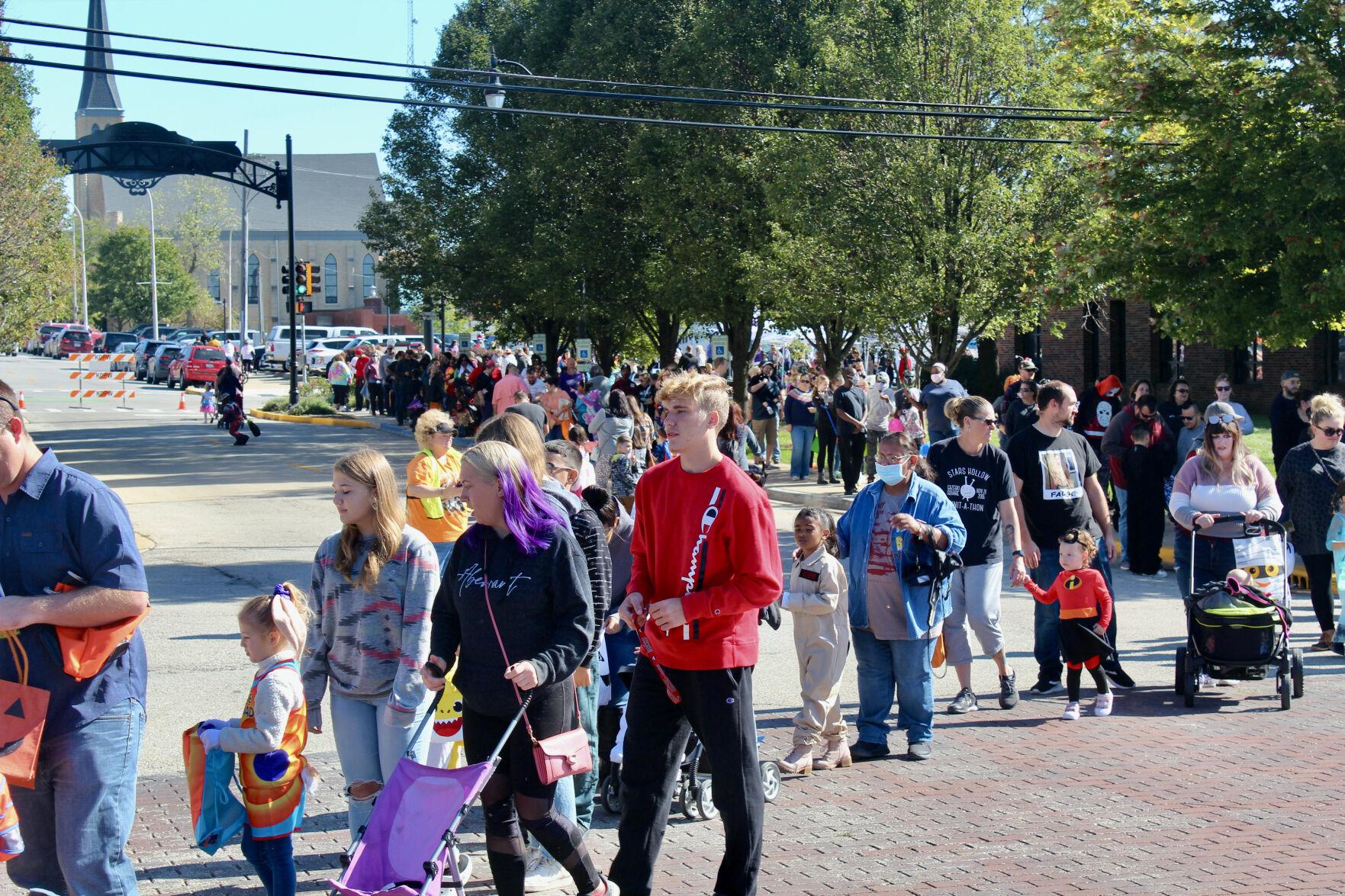 Families line up to take part in the trunk-or-treat portion of Halloween Downtown. The line extended around the block for much of the event.

KANKAKEE — Two Kankakee teenagers were shot and sustained non-life-threatening injuries following a drive-by shooting at about 6 p.m. Friday, according to Kankakee police.

Kankakee Police Chief Robin Passwater described the incident as part of an ongoing feud between a group of boys. He said the injured boys were targeted.

“This was not a random shooting. These two wounded [boys] have been involved in past shootings over the past three months,” Passwater said.

Friday’s shooting took place in the 500 block of South Myrtle Avenue in east Kankakee. The boys were on a porch when a vehicle drove past and fired at them, police said.

The teens were taken to a local hospital for treatment, according to police.

Kankakee police were working to identify the shooters late Friday.

A sight like this could become a growing trend here as housing starts in the Kankakee County region are heading upwards in 2021.

There appears to be at least a flicker, a pulse and maybe a growing heartbeat when it comes to new home construction in Kankakee County.

During last week’s Bradley Village Board meeting, Bradley’s community development director Bruce Page reported that within the first nine months of 2021, the village had issued permits for 29 new houses.

While this number may not blow someone’s socks off, it is an impressive number considering the village’s building department had issued a total of 30 in all of 2019 and 2020.

“Housing is growing,” Page said. “There is great belief in the stability of Bradley for years to come.”

He noted the village has issued 720 building permits as well, which is nearly a 6 percent drop from 2020. He noted, however, due to the pandemic, there was quite a surge in house projects last year as people were much more confined to their home base.

Watson would like to see perhaps 50 to 60 new houses being built in the village on an annual basis in years to come. A figure like that, he reasoned, brings steady, controlled growth and also allows a significant portion of that construction to be completed by local builders, rather than an out-of-town company.

“Years ago, the village of Bradley, like some other communities here, got out in front of itself by platting lots of homes with big companies and not much happened,” he said.

And during these past 10 years or so, there are unfinished platted subdivisions sprinkled throughout the region.

Little by little these subdivision are inching their way toward completion. The mayor, however, noted that when the time is right, he would like to see local builders take much smaller bites when developing new subdivisions. With that approach, he noted, growth can be much more natural thereby not overwhelming services such as the municipalities or school districts.

“I would like to see smaller bites,” he said. That plan is where he is coming up with the range of 50 to 60 houses.

Manteno Mayor Tim Nugent, who is also president and CEO of the Economic Alliance of Kankakee County, has been gauging the interests of local governing bodies to see if there is a willingness to expand special taxing districts making them more welcoming for new housing.

He noted there is renewed interest in new home construction, but the price of building materials has been so high this year that it is making it difficult for prospective homeowners to green-light construction.