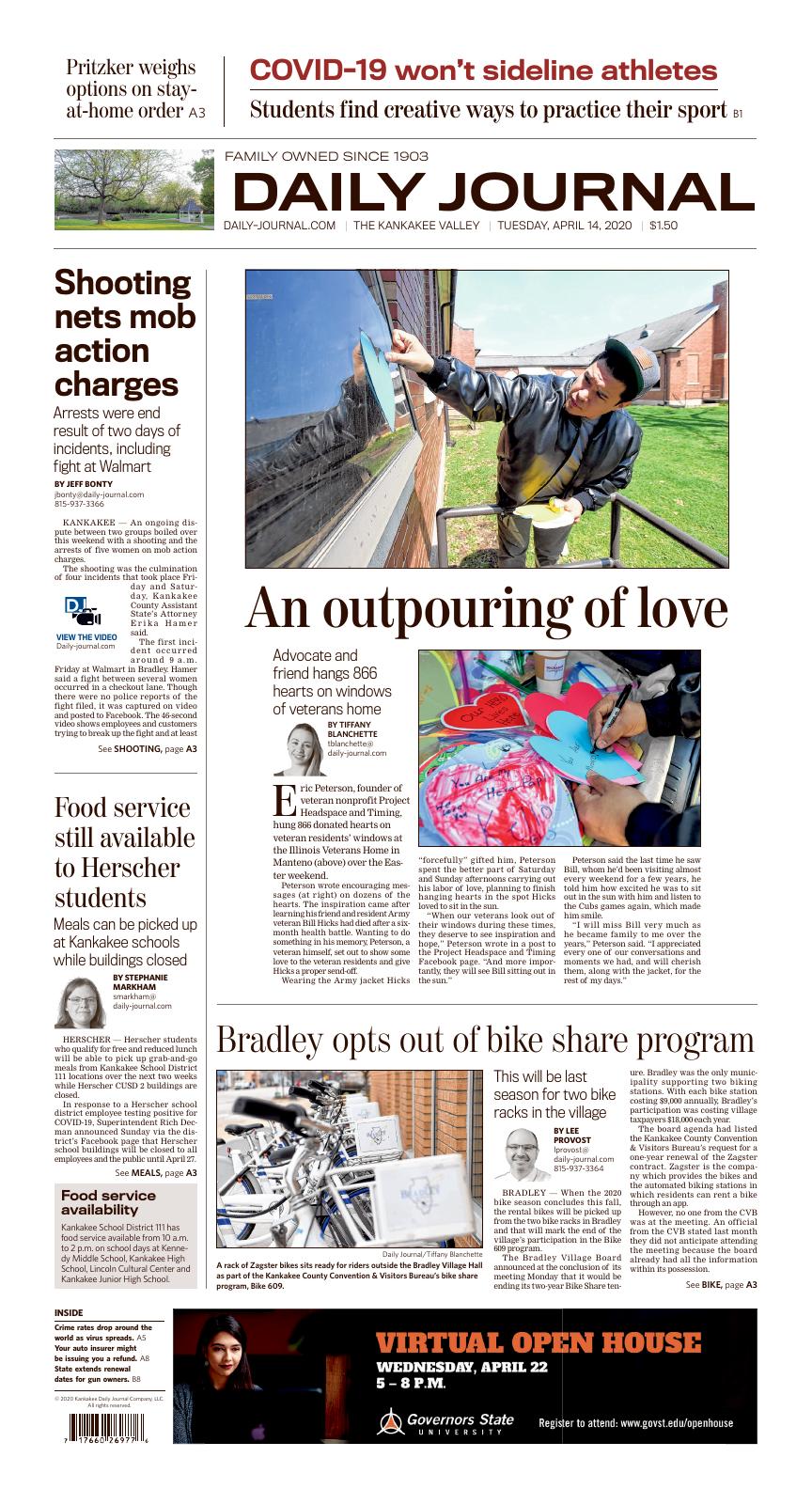 Eric Peterson, founder of veteran nonprofit Project Headspace and Timing, hung 866 donated hearts on veteran residents’ windows at the Illinois Veterans Home in Manteno (above) over the Easter weekend.

Peterson wrote encouraging messages (at right) on dozens of the hearts. The inspiration came after learning his friend and resident Army veteran Bill Hicks had died after a six-month health battle. Wanting to do something in his memory, Peterson, a veteran himself, set out to show some love to the veteran residents and give Hicks a proper send-off.

Wearing the Army jacket Hicks “forcefully” gifted him, Peterson spent the better part of Saturday and Sunday afternoons carrying out his labor of love, planning to finish hanging hearts in the spot Hicks loved to sit in the sun.

“When our veterans look out of their windows during these times, they deserve to see inspiration and hope,” Peterson wrote in a post to the Project Headspace and Timing Facebook page. “And more importantly, they will see Bill sitting out in the sun.”

Peterson said the last time he saw Bill, whom he’d been visiting almost every weekend for a few years, he told him how excited he was to sit out in the sun with him and listen to the Cubs games again, which made him smile.

“I will miss Bill very much as he became family to me over the years,” Peterson said. “I appreciated every one of our conversations and moments we had, and will cherish them, along with the jacket, for the rest of my days.”

BRADLEY — When the 2020 bike season concludes this fall, the rental bikes will be picked up from the two bike racks in Bradley and that will mark the end of the village’s participation in the Bike 609 program.

The Bradley Village Board announced at the conclusion of its meeting Monday that it would be ending its two-year Bike Share tenure. Bradley was the only municipality supporting two biking stations. With each bike station costing $9,000 annually, Bradley’s participation was costing village taxpayers $18,000 each year.

The board agenda had listed the Kankakee County Convention & Visitors Bureau’s request for a one-year renewal of the Zagster contract. Zagster is the company which provides the bikes and the automated biking stations in which residents can rent a bike through an app.

However, no one from the CVB was at the meeting. An official from the CVB stated last month they did not anticipate attending the meeting because the board already had all the information within its possession.

Mayor Pro Tem Mike Watson had noted the board has several new trustees and they had questions regarding the bike program.

The administration noted during the meeting that the CVB had declined the invitation. Watson asked if any trustee would like to make a motion to extend the contract by an additional year. There was no motion made. After the meeting, Watson said the village will move on.

“The board wanted to hear from them. It’s sad. They are certainly welcomed to talk to us, but they have to step forward,” he said.

The Bike 609 program placed 50 bikes at a total of 11 bike stations throughout Kankakee, Bradley, Bourbonnais and Manteno. The program began in July 2018.

In addition to the municipalities, several organizations also help fund the program, each with $9,000 of financial support.

KANKAKEE — An ongoing dispute between two groups boiled over this weekend with a shooting and the arrests of five women on mob action charges.

The first incident occurred around 9 a.m. Friday at Walmart in Bradley. Hamer said a fight between several women occurred in a checkout lane. Though there were no police reports of the fight filed, it was captured on video and posted to Facebook. The 46-second video shows employees and customers trying to break up the fight and at least four women involved in the altercation leaving the store.

The second incident occurred at 9:40 a.m. Friday, with Kankakee police responding to a report of shots fired in the 1200 block of East Locust Avenue. At the scene, officers were told that a person got out of an SUV and fired a handgun into the air.

A vehicle matching the description was later stopped on North Fifth Avenue but no arrests were made, according to police. The incident remains under investigation.

Then, at 10:30 a.m. Friday, police were called to a report of a fight involving some of the same people from the previous two incidents at East Chestnut Street and North Dearborn Avenue.

The final incident occurred at 11:40 a.m. Saturday in the 1500 block of East Court Street in Kankakee. Hamer said Shannon L. Green, 38, of Kankakee, was driving with her mother when she pulled into the parking lot of a business on East Court Street. Green told police that a vehicle pulled up with five women who confronted her, Hamer said. Green told police that she then fired a gun into the air.

Hamer said that a 25-year-old woman in the vehicle was shot and windows were shot out of at least one vehicle.

Green fled in her vehicle northbound on Interstate 57 and the women in the other vehicle pursued her and called 911, Hamer said. Bradley police stopped Green’s vehicle on the interstate and reportedly found a revolver inside the vehicle, Hamer said.

The shooting victim was driven to a local hospital for treatment of a gunshot wound to her hand.

HERSCHER — Herscher students who qualify for free and reduced lunch will be able to pick up grab-and-go meals from Kankakee School District 111 locations over the next two weeks while Herscher CUSD 2 buildings are closed.

In response to a Herscher school district employee testing positive for COVID-19, Superintendent Rich Decman announced Sunday via the district’s Facebook page that Herscher school buildings will be closed to all employees and the public until April 27.

After the two weeks, custodians will return to work to thoroughly clean the buildings, according to the post.

Decman said the district contacted Kankakee school officials who “graciously offered” to allow Herscher students on free and reduced lunch to pick up food at any of their locations serving meals.

“We are very thankful for their assistance,” Decman said in an email to the Daily Journal.

Decman said he is “highly recommending” that teachers and all employees stay out of the buildings for the next two weeks; however, they would be allowed to retrieve something quickly then leave if there is something they absolutely need.

Maintenance staff would also be able to enter buildings in the event of a maintenance emergency, he added.

Prior to this situation, the district’s maintenance staff, custodians and some kitchen staff were still working in the buildings, Decman said.