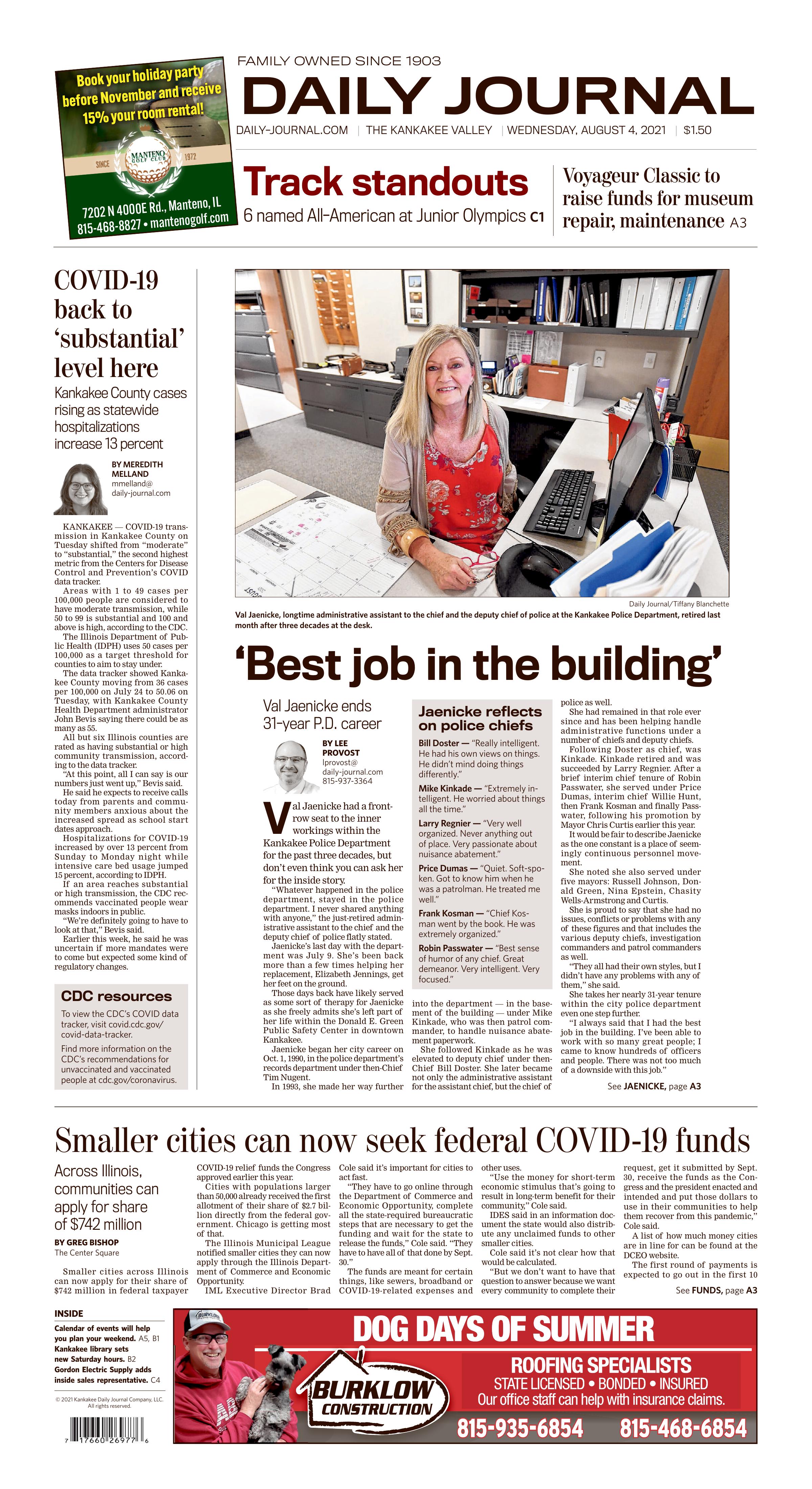 Val Jaenicke, longtime administrative assistant to the chief and the deputy chief of police at the Kankakee Police Department, retired last month after three decades at the desk. READ MORE.

KANKAKEE — Val Jaenicke had a front-row seat to the inner workings within the Kankakee Police Department for the past three decades, but don’t even think you can ask her for the inside story.

Jaenicke’s last day with the department was July 9. She’s been back more than a few times helping her replacement, Elizabeth Jennings, get her feet on the ground.

Those days back have likely served as some sort of therapy for Jaenicke as she freely admits she’s left part of her life within the Donald E. Green Public Safety Center in downtown Kankakee.

In 1993, she made her way further into the department — in the basement of the building — under Mike Kinkade, who was then patrol commander, to handle nuisance abatement paperwork.

She followed Kinkade as he was elevated to deputy chief under then-Chief Bill Doster. She later became not only the administrative assistant for the assistant chief, but the chief of police as well.

She had remained in that role ever since and has been helping handle administrative functions under a number of chiefs and deputy chiefs.

Following Doster as chief, was Kinkade. Kinkade retired and was succeeded by Larry Regnier. After a brief interim chief tenure of Robin Passwater, she served under Price Dumas, interim chief Willie Hunt, then Frank Kosman and finally Passwater, following his promotion by Mayor Chris Curtis earlier this year.

It would be fair to describe Jaenicke as the one constant is a place of seemingly continuous personnel movement.

She is proud to say that she had no issues, conflicts or problems with any of these figures and that includes the various deputy chiefs, investigation commanders and patrol commanders as well.

“They all had their own styles, but I didn’t have any problems with any of them,” she said.

She takes her nearly 31-year tenure within the city police department even one step further.

“I always said that I had the best job in the building. I’ve been able to work with so many great people; I came to know hundreds of officers and people. There was not too much of a downside with this job.”

Jaenicke’s departure means there will be a new face behind the desk in the department’s administrative office. The face belongs to 41-year-old Elizabeth Jennings.

The Manteno resident actually was in the department’s records department, the same place where Jaenicke started her city tenure.

“I was excited about the opportunity to advance,” she said.

Jennings and her husband came to the area in 2010. Her husband is an Illinois State Trooper.

Even though she has been in the department officially for about a month, she said still feels the pressure of replacing Jaenicke.

“Val left behind big shoes to fill,” she said. Asked what she believes will be her most challenging task, she quickly responds: “Being as great as Val.”

Now whether Jennings will have as long of a career as Jaenicke certainly remains unknown, but that’s her goal.

“I have no intention of leaving this job until I’m asked. Hopefully, I’ll never be asked to leave.”

Jaenicke has been a frequent visitor for Jennings. She comes to her desk whenever Jennings calls with a question or has difficultly putting her hands on certain documents.

Jaenicke noted she doesn’t mind. It gives her a chance to see the faces of the people who basically became her family.

The mother of two sons — Andy Mackin, a sergeant with the Kankakee County Sheriff’s Department, and Nathan, who died in a 1997 traffic accident — Jaenicke is also a grandmother.

She finding herself with much time on her hands and she is devoting some of it to her newest career. She repurposes furniture and sells it at The Gathering in Gilman.

A 1976 graduate of Bishop McNamara Catholic High School, Jaenicke actually started her career working in the records department of the sheriff’s department under then-Sheriff Larry Hildebrand. However, in 1982 her first boy arrived and she went home and operated an at-home day care.

She noted when she took the city job in 1990, she experienced a cut in pay. But, she said, she did get healthcare and a pension.

Passwater joked that when Val told him she was calling it a career he tried to talk her out of it.

“She was excellent to work with. She is without a doubt one of the nicest people I’ve ever met. She has been the continuity between the chief,” he said. “It’s going to be tough for Elizabeth to be that person who replaced Val. Val was here for so many years that she just knew all the history.”

Kinkade, who served as chief from January 2000 to June 2010, said he could not have imagined doing his job for all those years without Val taking care of all the details of the office.

“She had the perfect personality for working for all the different types of peole she had to deal with. She has such a pleasant personality and she took her work very seriously,” Kinkade said.

The two worked together for about 20 years. He acknowledged he did not know Jaenicke prior to her taking a seat in his office.

He said she was always friendly, never flustered, self-motivated, extremely organized and “a great help to me and the deputy chief. She will be missed.”

She will also miss those still in the department.

“It’s like you leave a part of yourself behind,” she said of her retirement. “I miss what’s going on. I miss the people.”

There is also one thing she actually did miss. While she participated in the Citizens Police Academy, Jaenicke never made her way into the squad car.

“I never went on a ride-along.”

Now that her calendar has a some flexibility, maybe that can be accomplished in retirement.

Bill Doster - 'Really intelligent. He had his own views on things. He didn't mind doing things differently.'

Mike Kinkade - 'Extremely intelligent. He worried about things all the time.'

Price Dumas - 'Quiet. Soft-spoken. Got to know him when he was a patrolman. He treated me well.'

Frank Kosman - 'Chief Kosman went by the book. He was extremely organized.'

Smaller cities across Illinois can now apply for their share of $742 million in federal taxpayer COVID-19 relief funds the Congress approved earlier this year.

Cities with populations larger than 50,000 already received the first allotment of their share of $2.7 billion directly from the federal government. Chicago is getting most of that.

The Illinois Municipal League notified smaller cities they can now apply through the Illinois Department of Commerce and Economic Opportunity.

“They have to go online through the Department of Commerce and Economic Opportunity, complete all the state-required bureaucratic steps that are necessary to get the funding and wait for the state to release the funds,” Cole said. “They have to have all of that done by Sept. 30.”

The funds are meant for certain things, like sewers, broadband or COVID-19-related expenses and other uses.

“Use the money for short-term economic stimulus that’s going to result in long-term benefit for their community,” Cole said.

IDES said in an information document the state would also distribute any unclaimed funds to other smaller cities.

Cole said it’s not clear how that would be calculated.

“But we don’t want to have that question to answer because we want every community to complete their request, get it submitted by Sept. 30, receive the funds as the Congress and the president enacted and intended and put those dollars to use in their communities to help them recover from this pandemic,” Cole said.

A list of how much money cities are in line for can be found at the DCEO website.

The first round of payments is expected to go out in the first 10 business days of October, according to the DCEO. Reports from the cities to the U.S. Treasury about their spending must be made by the end of October, with subsequent reports throughout the next several years.

“Approximately 12 months after the first tranche of [non-entitlement units] funding is disbursed, the State will disburse the second tranche of NEU funding,” the agency said. “These payments will go to the same NEUs that received first tranche payments. Per Treasury guidelines, there will be no opportunity for the State to amend the list of NEUs eligible for the second tranche payments.”

The money is part of the overall $160 billion in federal taxpayer funds set aside for Illinois since the beginning of the pandemic.

The amount of community transmission in Illinois counties on Aug. 2, according to the Centers for Disease Control and Prevention’s COVID data tracker. Red is high transmission, orange is substantial, yellow is moderate and blue is low.

Courtesy of the CDC

KANKAKEE — COVID-19 transmission in Kankakee County on Tuesday shifted from “moderate” to “substantial,” the second highest metric from the Centers for Disease Control and Prevention’s COVID data tracker.

Areas with 1 to 49 cases per 100,000 people are considered to have moderate transmission, while 50 to 99 is substantial and 100 and above is high, according to the CDC.

The Illinois Department of Public Health (IDPH) uses 50 cases per 100,000 as a target threshold for counties to aim to stay under.

The data tracker showed Kankakee County moving from 36 cases per 100,000 on July 24 to 50.06 on Tuesday, with Kankakee County Health Department administrator John Bevis saying there could be as many as 55.

All but six Illinois counties are rated as having substantial or high community transmission, according to the data tracker.

“At this point, all I can say is our numbers just went up,” Bevis said.

He said he expects to receive calls today from parents and community members anxious about the increased spread as school start dates approach.

Hospitalizations for COVID-19 increased by over 13 percent from Sunday to Monday night while intensive care bed usage jumped 15 percent, according to IDPH.

“We’re definitely going to have to look at that,” Bevis said.

Earlier this week, he said he was uncertain if more mandates were to come but expected some kind of regulatory changes.

Find more information on the CDC's recommendations for unvaccinated and vaccinated people at cdc.gov/coronavirus.