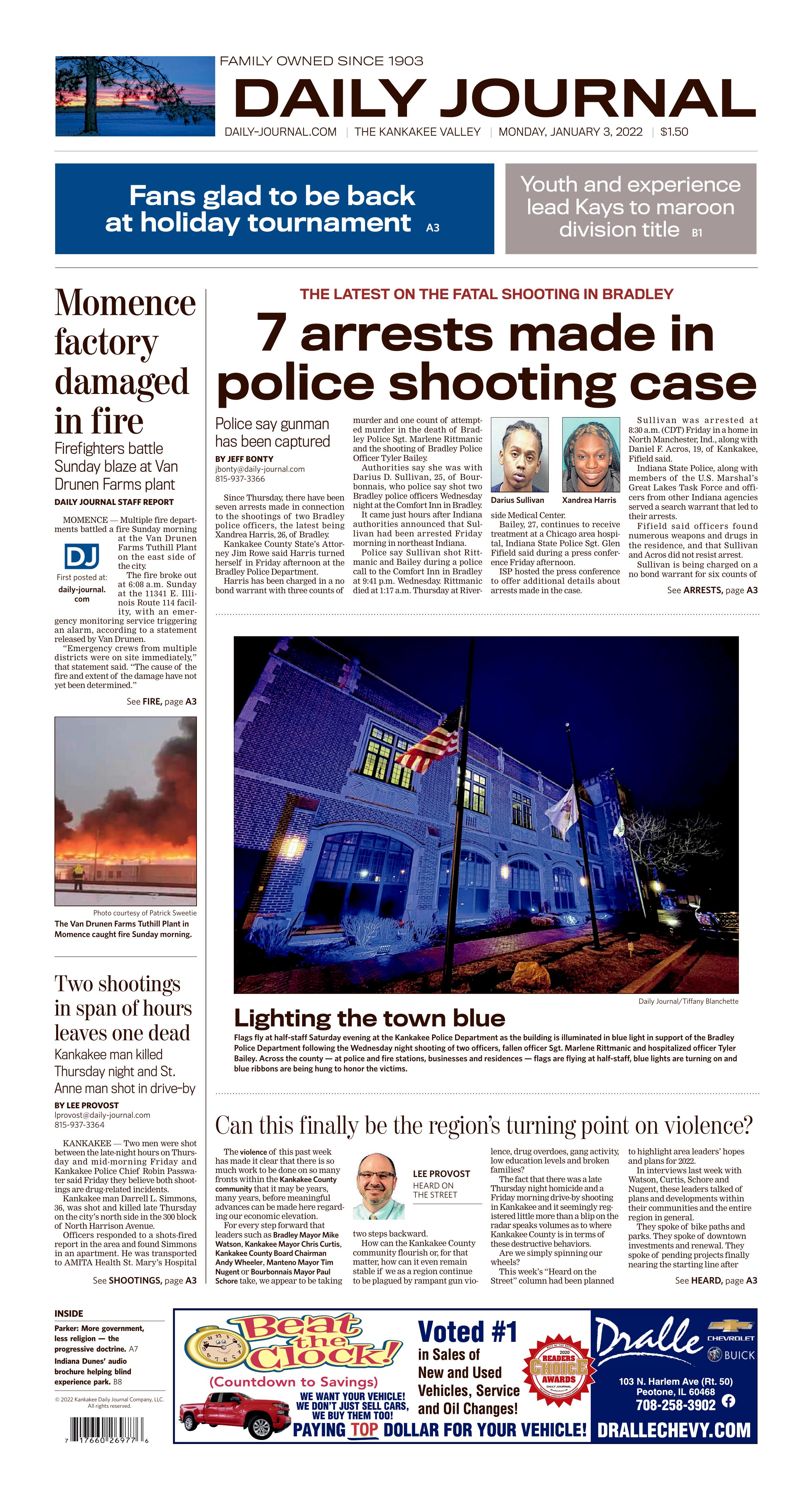 Crime
Second suspect turns self in to Bradley Police; 7 arrests in total
Photo courtesy of the Kankakee County Sheriff Department

Editor’s Note: This story has been updated with new information on Harris’ arrest.

Since Thursday, there have been seven arrests made in connection to the shootings of two Bradley police officers, the latest being Xandrea Harris, 26, of Bradley.

Harris has been charged in a no bond warrant with three counts of murder and one count of attempted murder in the death of Bradley Police Sgt. Marlene Rittmanic and the shooting of Bradley Police Officer Tyler Bailey.

Authorities say she was with Darius D. Sullivan, 25, of Bourbonnais, who police say shot two Bradley police officers Wednesday night at the Comfort Inn in Bradley.

It came just hours after Indiana authorities announced that Sullivan had been arrested Friday morning in northeast Indiana.

Police say Sullivan shot Rittmanic and Bailey during a police call to the Comfort Inn in Bradley at 9:41 p.m. Wednesday. Rittmanic died at 1:17 a.m. Thursday at Riverside Medical Center.

ISP hosted the press conference to offer additional details about arrests made in the case.

Sullivan was arrested at 8:30 a.m. (CDT) Friday in a home in North Manchester, Ind., along with Daniel F. Acros, 19, of Kankakee, Fifield said.

Indiana State Police, along with members of the U.S. Marshal’s Great Lakes Task Force and officers from other Indiana agencies served a search warrant that led to their arrests.

Fifield said officers found numerous weapons and drugs in the residence, and that Sullivan and Acros did not resist arrest.

Sullivan is being charged on a no bond warrant for six counts of murder, two for attempted murder and one count for aggravated discharge of a firearm, Fifield said.

Following a pursuit, both were taken into custody, Fifield said, adding that a handgun and drugs were recovered from the vehicle.

Baker and Adams were charged by Fulton County, Ind., authorities with possession of stolen property, resisting law enforcement, and possession of a handgun without a license.

On Thursday, two people were arrested in Kankakee County in connection to the search for Sullivan and Harris.

Nichele Newton-Carroll, 43, and Jelman J. Sullivan, 21, were both arrested and preliminarily charged by Illinois State Police with obstructing justice, according to officials.

Kankakee County State’s Attorney Jim Rowe said Newton-Carroll is Sullivan’s mother but he was unsure of the connection between Darius Sullivan and Jelman Sullivan.

The two Bradley officers were shot late Wednesday while investigating a call of a barking dog in an unattended vehicle in the parking lot of Comfort Inn in Bradley, according to police.

At 9:41 p.m. Wednesday, Rittmanic and Bailey located the vehicle and the hotel room where the possible owner was staying.

While initiating a conversation, the officers were attacked by the occupants of the room and both were shot, according to police.

Rittmanic, 49, was a 14-year member of the Bradley Department. Prior to that, she was an Iroquois County sheriff deputy from 2000-07.

Bailey has been with the department since May 2018. He was previously an officer with the Momence Police Department.

Since Thursday, there have been seven arrests made in connection to the shootings of two Bradley police officers at the Comfort Inn Hotel in B… 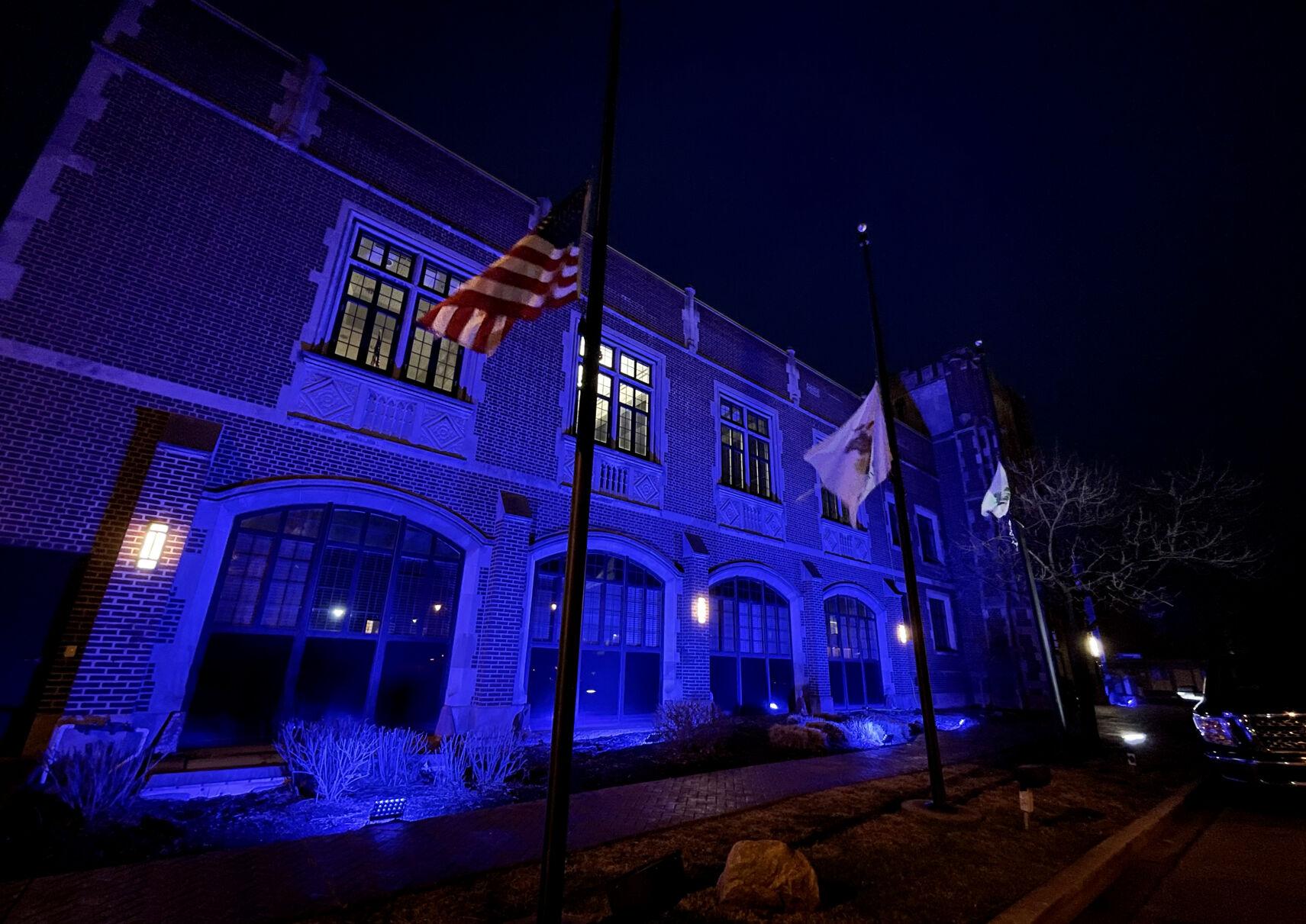 Flags fly at half-staff Saturday evening at the Kankakee Police Department as the building is illuminated in blue light in support of the Bradley Police Department following the Wednesday night shooting of two officers, fallen officer Sgt. Marlene Rittmanic and hospitalized officer Tyler Bailey. Across the county — at police and fire stations, businesses and residences — flags are flying at half-staff, blue lights are turning on and blue ribbons are being hung to honor the victims.

The violence of this past week has made it clear that there is so much work to be done on so many fronts within the Kankakee County community that it may be years, many years, before meaningful advances can be made here regarding our economic elevation.

How can the Kankakee County community flourish or, for that matter, how can it even remain stable if we as a region continue to be plagued by rampant gun violence, drug overdoses, gang activity, low education levels and broken families?

The fact that there was a late Thursday night homicide and a Friday morning drive-by shooting in Kankakee and it seemingly registered little more than a blip on the radar speaks volumes as to where Kankakee County is in terms of these destructive behaviors.

Are we simply spinning our wheels?

This week’s “Heard on the Street” column had been planned to highlight area leaders’ hopes and plans for 2022.

In interviews last week with Watson, Curtis, Schore and Nugent, these leaders talked of plans and developments within their communities and the entire region in general.

They spoke of bike paths and parks. They spoke of downtown investments and renewal. They spoke of pending projects finally nearing the starting line after delays largely instigated by the COVID-19 pandemic. They spoke of the just-started capital campaign for the pending riverwalk project.

Now it hardly seems appropriate to talk about those aspirations as the region reels with sadness and disgust regarding the Wednesday homicide of Bradley Police Sgt. Marlene Rittmanic, the shooting of Bradley Police Officer Tyler Bailey in that same incident and the Thursday night drive-by shooting death of Kankakeean Darrell L. Simmons.

Perhaps it’s the shock of the news of these events which has left me feeling more than a little skeptical of this region taking significant steps forward.

Maybe in a week — maybe it will be several days, who knows — my optimism about regional development will return. I know it will because it always has.

But it is my absolute hope that these events of this past week have shaken our leaders, our citizens, our desire and our resolve that this destructive behavior can no longer be tolerated on any level.

Heads can no longer be turned to look the other way. It can longer be “Kankakee’s problem,” “Bradley’s issue,” or “Momence’s situation.”

We will either swim together or we will drown together. We will decide that fate.

While the solemn procession of Sgt. Rittmanic was painful to watch, it was also inspirational. Citizens lining the streets of Kankakee, Bradley and Bourbonnais as public safety personnel escorted Sgt. Rittmanic from the Kankakee County coroner’s office to Clancy-Gernon Funeral Home.

It provided me at least with some hope that the vast majority of people in this region have witnessed enough senselessness. It is my hope they have reached the limit. It is my hope they will not let the shock fade away and continue on with “life as usual.”

Can this finally be that turning point? That is a question we must answer.

Firefighters try to extinguish a fire at Van Drunen Farms Tuthill Plant in Momence Sunday morning. It caused extensive damage to the facility, which company officials say will be rebuilt.

MOMENCE — Multiple fire departments battled a fire Sunday morning at the Van Drunen Farms Tuthill Plant on the east side of the city.

The fire broke out at 6:08 a.m. Sunday at the 11341 E. Illinois Route 114 facility, with an emergency monitoring service triggering an alarm, according to a statement released by Van Drunen.

“Emergency crews from multiple districts were on site immediately,” that statement said. “The cause of the fire and extent of the damage have not yet been determined.”

Firefighters worked into the afternoon to extinguish hot spots in the plant and had to return to the site at 6:30 p.m. for a rekindle. Fire crews were on scene for a total of 9.5 hours.

“No one was in the plant at the time the fire started, so there were no injuries to any employees,” the Van Drunen statement said. “Our thoughts and prayers are with the first responders and with the many Van Drunen Farms employees who would call this plant their own.”

The Tuthill facility is a freeze-dried ingredient production facility that employs 123 people. The site was formerly owned by the Tuthill Spring Company and has been under Van Drunen Farms ownership for several years.

“This is a tragic loss for this community,” Momence Mayor Chuck Steele said. “Van Drunen Farms plays a big role in this community. It’s heartbreaking to see this happen to anyone.”

Steele said he was grateful for the support of the local fire departments.

Temperatures are in the high teens and low twenties with single-digit wind chill readings.

KANKAKEE — Two men were shot between the late-night hours on Thursday and mid-morning Friday and Kankakee Police Chief Robin Passwater said Friday they believe both shootings are drug-related incidents.

Kankakee man Darrell L. Simmons, 36, was shot and killed late Thursday on the city’s north side in the 300 block of North Harrison Avenue.

Officers responded to a shots-fired report in the area and found Simmons in an apartment. He was transported to AMITA Health St. Mary’s Hospital by the Kankakee Fire Department and died a short time later.

Police say that Simmons was targeted in the shooting, which they say occurred outside the apartment. No arrests have been made.

There was also a second shooting Friday morning only a short distance from where Simmons was shot.

In the second incident, at about 11:20 a.m. Friday on North New Street, a 34-year-old St. Anne man was wounded by a drive-by shooter, Passwater said. The victim was taken to St. Mary’s emergency room and is in stable condition.

At about 2 p.m. Friday, the St. Anne man, Jeffery M. Lawson, was discharged from the hospital and taken into custody and has been booked into the Jerome Combs Detention Center. Lawson was wanted on a U.S. Marshal’s warrant related to a weapon violation.

Investigators are currently following up on leads and asking that anyone with information call the Kankakee Police Department at 815-933-0426.