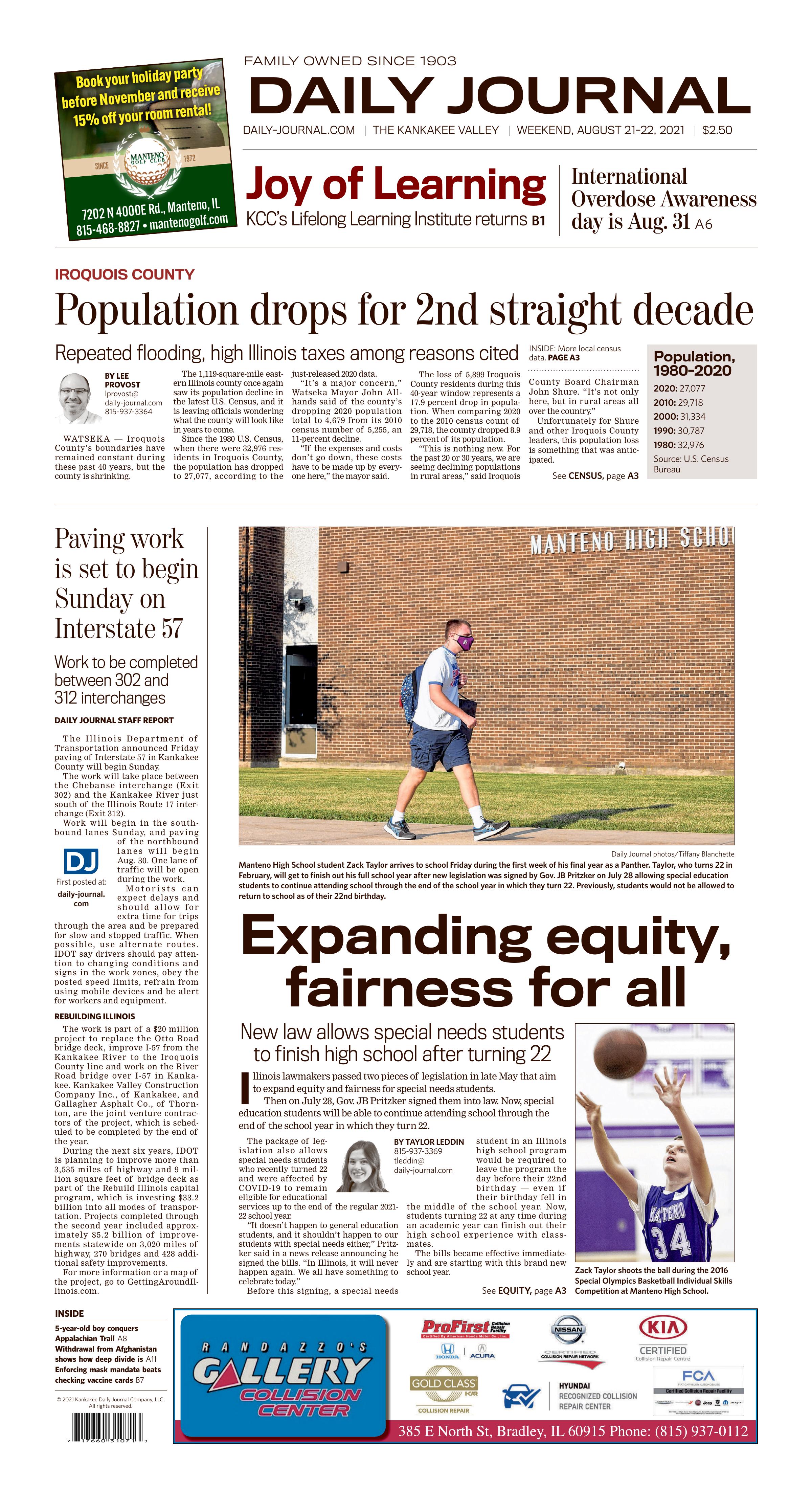 A semi travels south along Route 45/52 into Iroquois County near Chebanse. For the third straight decade, the county's population has decreased according to the census.

Firefighters from Kentland-Jefferson Township Fire navigate their way through a flooded neighborhood north of Route 24 in Watseka in March 2018. Floodwaters from the Iroquois River have plagued the city for years and is being listed among the reasons residents are leaving the community.

WATSEKA — Iroquois County’s boundaries have remained constant during these past 40 years, but the county is shrinking.

The 1,119-square-mile eastern Illinois county once again saw its population decline in the latest U.S. Census, and it is leaving officials wondering what the county will look like in years to come.

“If the expenses and costs don’t go down, these costs have to be made up by everyone here,” the mayor said.

“This is nothing new. For the past 20 or 30 years, we are seeing declining populations in rural areas,” said Iroquois County Board Chairman John Shure. “It’s not only here, but in rural areas all over the country.”

Unfortunately for Shure and other Iroquois County leaders, this population loss is something that was anticipated.

“We were expecting numbers something like this,” he said.

“People might be looking for a different lifestyle. I don’t know,” Shure said. “How far is our population going to go down before it turns around is a hard question to answer.”

Shure is hoping that as more people are able to work for home, that the trend will reverse itself and people will return to the rural communities.

Some say repeated flooding of the Iroquois River has hurt Iroquois County. That flooding eventually caused many homes within Watseka to be abandoned and ultimately demolished.

While some families rebuilt in Watseka, many did not.

Watseka-based county board member Roger Bard believes that flooding wasn’t the only issue. He said the high taxes of Illinois push people to nearby Indiana.

“I know people who have pulled up their roots and moved there,” he said.

Of course, he said, flooding discouraged people to stay.

He said Iroquois County will always remain, but how the location can continue to function with a declining tax base is an issue that must be addressed.

“There is really not much for young people to stay. They go to where the jobs are or they go to college. We talk a lot at the county board level about this county around, but we haven’t come up with an answer yet,” Bard said.

“We have the farmland,” he said. “We will always have that. It’s a frustrating time.”

Allhands said the time has come for Watseka and all of Iroquois County to become more aggressive in the marketing of their communities.

“We have low crime; we offer the basic amenities,” he said. “I see people from outside our area buying houses here.”

Allhands said communities such as Watseka are plagued by the decisions being made in Springfield.

“It all boils down to Springfield starting to work together,” he said. “People are not just leaving Watseka or Iroquois County. They are leaving this state. We must make this state more enticing for people to live here.”

Manteno High School student Zack Taylor arrives to school Friday during the first week of his final year as a Panther. Taylor, who turns 22 in February, will get to finish out his full school year after new legislation was signed by Gov. JB Pritzker on July 28 allowing special education students to continue attending school through the end of the school year in which they turn 22. Previously, students would not be allowed to return to school as of their 22nd birthday.

Zack Taylor shoots the ball during the 2016 Special Olympics Basketball Individual Skills Competition at Manteno High School. Taylor, soon to be 22, started his final year as a Panther this week.

Manteno High School student Zack Taylor arrives to school Friday during the first week of his final year as a Panther. Taylor, who turns 22 in February, will get to finish out his full school year after new legislation signed by Gov. J.B. Pritzker on July 28 allows special education students to continue attending school through the end of the school year in which they turn 22. Previously, students would not be allowed to return to school as of their birthday. READ MORE.

Illinois lawmakers passed two pieces of legislation in late May that aim to expand equity and fairness for special needs students.

Then on July 28, Gov. JB Pritzker signed them into law. Now, special education students will be able to continue attending school through the end of the school year in which they turn 22.

The package of legislation also allows special needs students who recently turned 22 and were affected by COVID-19 to remain eligible for educational services up to the end of the regular 2021-22 school year.

“It doesn’t happen to general education students, and it shouldn’t happen to our students with special needs either,” Pritzker said in a news release announcing he signed the bills. “In Illinois, it will never happen again. We all have something to celebrate today.”

Before this signing, a special needs student in an Illinois high school program would be required to leave the program the day before their 22nd birthday — even if their birthday fell in the middle of the school year. Now, students turning 22 at any time during an academic year can finish out their high school experience with classmates.

The bills became effective immediately and are starting with this brand new school year.

This came as a relief to Terina Taylor, mother of Manteno High School student Zack Taylor, who will be turning 22 in February.

“He’ll get to complete the year in a natural transition instead of breaking it off in February like, ‘OK, you’re done,’” Terina said.

The Taylor family had been preparing Zack for his possible completion in February as they couldn’t be sure the legislation would pass. After the bills were signed, they were able to share with him the good news he could finish out the full school year.

Similar to many parents of special needs children, Terina and her husband rely on the school program to be a place for Zack to go while they are both at work. The extension of Zack’s final high school year gives them more time to prepare for the next step.

“As parents of someone with special needs, you know what’s coming, but I feel like this part of the journey is getting harder,” Terina said. “There’s help along the way, but we have to find it more than having it available during the school day.”

The extension also allows for Zack to finish out the school year with his younger brother who is a senior at Manteno High School. The brothers ride to school together each morning.

Ruff said the extension “allows the school district staff to continue the relationships that have been built with the families and the student, as well as providing continued support and assisting in the transition to independence.”

The director shared that this transition is easier to do at the end of a school year. The benefits of the law change also will be felt by Kankakee School District 111’s transition programming staff.

Karen C. Brown, educational consultant, and Millicent Griffin, supervisor of student support services, are looking forward to having all students remain through the end of the school year.

“[The law] will allow students to maintain their structure, in their daily life and their growth, and they are able to continue to work on their skill development to enhance the skills they were working on previously,” said Griffin, who noted this helps make up in-class and community time that was lost due to last year’s remote learning.

“I’m really happy about this shift that Illinois has taken,” Brown said. “I really think it helps the students’ social and emotional being, and gives them more time to be connected to their community. It’s a benefit to everyone.”

The district works with students and families about planning for post-high school life. Brown said that parents are connected with various agencies in the community that can help serve students after they exit from the high school or transition program.

Along with the leadership and support of Dr. Genevra Walters, the district is working on making services for special needs students even stronger.

“With our minds and new visions and new thoughts and new people coming into the district, we definitely want to enhance [the program],” Griffin said. “I think that’s aligning with the natural progression with where the board and the district see the students being first.”

The legislation will allow students with disabilities to finish the school year and celebrate the milestone of high school completion in the same way as their peers.

House Bill 2748 will allow special education students to remain eligible for services up to the end of the regular 2021-22 school year if a student reached the age of 22 during the time in which the student's in-person instruction, services or activities were suspended for a period of three months or more during the school year as a result of the COVID-19 pandemic.

This legislation will give students an opportunity to regain that critical in-person classroom instruction time and transition to adult special needs services.

Signed into law July 28, both were effective immediately.

Illinois
Paving to begin on I-57

The Illinois Department of Transportation announced Friday paving of Interstate 57 in Kankakee County will begin Sunday.

Motorists can expect delays and should allow for extra time for trips through the area and be prepared for slow and stopped traffic. When possible, use alternate routes. IDOT say drivers should pay attention to changing conditions and signs in the work zones, obey the posted speed limits, refrain from using mobile devices and be alert for workers and equipment.

The work is part of a $20 million project to replace the Otto Road bridge deck, improve I-57 from the Kankakee River to the Iroquois County line and work on the River Road bridge over I-57 in Kankakee. Kankakee Valley Construction Company Inc., of Kankakee, and Gallagher Asphalt Co., of Thornton, are the joint venture contractors of the project, which is scheduled to be completed by the end of the year.

During the next six years, IDOT is planning to improve more than 3,535 miles of highway and 9 million square feet of bridge deck as part of the Rebuild Illinois capital program, which is investing $33.2 billion into all modes of transportation. Projects completed through the second year included approximately $5.2 billion of improvements statewide on 3,020 miles of highway, 270 bridges and 428 additional safety improvements.

For more information or a map of the project, go to GettingAroundIllinois.com.