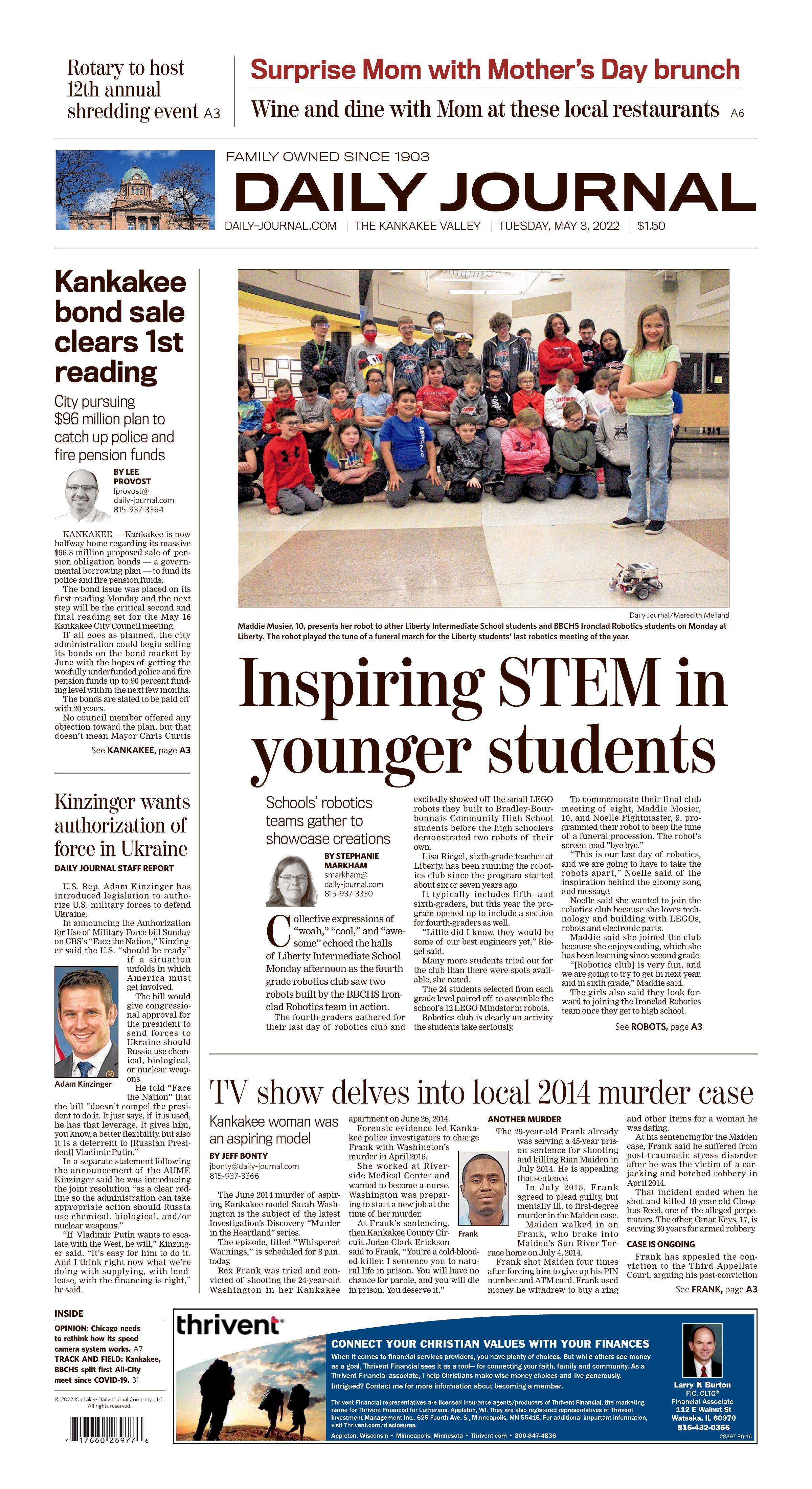 Maddie Mosier, 10, presents her robot to other Liberty Intermediate School students and BBCHS Ironclad Robotics students on Monday at Liberty. The robot played the tune of a funeral march for the Liberty students’ last robotics meeting of the year.

One of the Lego Mindstorm robots built with Lego by Liberty Intermediate School robotics students. Fourth through sixth grade students participate in the program, which was visited by BBCHS Ironclad Robotics students Monday.

From left: Maddie Mosier, 10, sixth grade teacher Lisa Riegel and Noelle Fightmaster, 9, watch as Mosier and Fightmaster’s robot operates in front of Liberty Intermediate School students and BBCHS Ironclad Robotics students on Monday. The robot played the tune of a funeral march for the Liberty club’s last robotics meeting of the year.

The fourth-graders gathered for their last day of robotics club and excitedly showed off the small LEGO robots they built to Bradley-Bourbonnais Community High School students before the high schoolers demonstrated two robots of their own.

Lisa Riegel, sixth-grade teacher at Liberty, has been running the robotics club since the program started about six or seven years ago.

It typically includes fifth- and sixth-graders, but this year the program opened up to include a section for fourth-graders as well.

“Little did I know, they would be some of our best engineers yet,” Riegel said.

Many more students tried out for the club than there were spots available, she noted.

The 24 students selected from each grade level paired off to assemble the school’s 12 LEGO Mindstorm robots.

Robotics club is clearly an activity the students take seriously.

To commemorate their final club meeting of eight, Maddie Mosier, 10, and Noelle Fightmaster, 9, programmed their robot to beep the tune of a funeral procession. The robot’s screen read “bye bye.”

“This is our last day of robotics, and we are going to have to take the robots apart,” Noelle said of the inspiration behind the gloomy song and message.

Noelle said she wanted to join the robotics club because she loves technology and building with LEGOs, robots and electronic parts.

Maddie said she joined the club because she enjoys coding, which she has been learning since second grade.

“[Robotics club] is very fun, and we are going to try to get in next year, and in sixth grade,” Maddie said.

The girls also said they look forward to joining the Ironclad Robotics team once they get to high school.

Emily Bertrand, technology teacher at Liberty, is in her first year of helping with the robotics club.

Bertrand said that after assembling the LEGO robots, students use coding to get the robots to perform certain tasks, such as driving in a perfect square.

One fourth-grader noted it took 20 tries to get the robot to complete that mission.

“I mean, it gets tricky,” Bertrand said. “They are learning geometry, math. They do a lot with measuring distance. It’s all problem solving.”

The BBCHS students demonstrated two robots that they used to compete with robotics teams from other high schools.

Mark Hampton, math and computer science teacher at BBCHS, said the high school’s robotics team has been around about seven years. The team currently has about 40 members and has had up to 60 to 70 in past years.

“I think we have evolved quite a bit,” he said. “This robot with the targeting was way beyond anything we could do in our first year.”

Hampton noted more adult mentors have also gotten involved in helping and working alongside the students over the years.

“We’ve had lots of students come through and go on to successful careers,” he said. “Many of the ones we have started with have now graduated and they are working at places like Apple and IBM and engineering companies, which is really exciting.”

Three of the high schoolers who visited Liberty on Monday also participated in the robotics club when they were younger, including freshman Reese Freedlund and junior Gabe Heather.

Freedlund said she enjoyed seeing the smiles on the kids’ faces when they saw the big robots.

“I absolutely loved robotics as a fourth-grader, and I think that’s why I felt so passionately about wanting to come here today,” she said. “Being able to have that experience at such a young age and getting excited about STEM, I wanted to share that love with these kids.”

Heather recalled how fun and exciting it was when he traveled to a competition in Champaign as a fourth grader in the robotics club.

“I remember it was a big time commitment, but it definitely paid off in the end,” he said.

Heather also said he was happy to hear so many students tried out for the robotics club.

“It’s just so great seeing so many people excited about it,” he said.

Editor's note: This story has been updated to correct the date the “Murder in the Heartland” episode aired. It aired Monday, May 2.

The June 2014 murder of aspiring Kankakee model Sarah Washington is the subject of the latest Investigation Discovery's “Murder in the Heartland” series.

Rex Frank was tried and convicted of shooting the 24-year-old Washington in her Kankakee apartment on June 26, 2014.

She worked at Riverside Medical Center and wanted to become a nurse. Washington was preparing to start a new job at the time of her murder.

At Frank’s sentencing, then Kankakee County Circuit Judge Clark Erickson said to Frank, “You’re a cold-blooded killer. I sentence you to natural life in prison. You will have no chance for parole, and you will die in prison. You deserve it.”

The 29-year-old Frank already was serving a 45-year prison sentence for shooting and killing Rian Maiden in July 2014. He is appealing that sentence.

In July 2015, Frank agreed to plead guilty, but mentally ill, to first-degree murder in the Maiden case.

Maiden walked in on Frank, who broke into Maiden’s Sun River Terrace home on July 4, 2014.

Frank shot Maiden four times after forcing him to give up his PIN number and ATM card. Frank used money he withdrew to buy a ring and other items for a woman he was dating.

At his sentencing for the Maiden case, Frank said he suffered from post-traumatic stress disorder after he was the victim of a carjacking and botched robbery in April 2014.

That incident ended when he shot and killed 18-year-old Cleophus Reed, one of the alleged perpetrators. The other, Omar Keys, 17, is serving 30 years for armed robbery.

In February, the court sent the case back to circuit court, according to its ruling.

It went on to say, “The trial court granted the State’s motion to dismiss the amended petition, finding that nothing was presented to show ineffective assistance of plea counsel. While pronouncing its decision, the court noted that no affidavit, from the defendant or counsel, was attached to the amended petition.”

The next court date is June 22.

The bond issue was placed on its first reading Monday and the next step will be the critical second and final reading set for the May 16 Kankakee City Council meeting.

If all goes as planned, the city administration could begin selling its bonds on the bond market by June with the hopes of getting the woefully underfunded police and fire pension funds up to 90 percent funding level within the next few months.

The bonds are slated to be paid off with 20 years.

No council member offered any objection toward the plan, but that doesn’t mean Mayor Chris Curtis isn’t taking any part of this plan for granted.

“This is a very big move,” Curtis said after the council meeting. “We are talking nearly $100 million here. Those kind of numbers are always a little nerve-racking.”

But the mayor believes the city council and the public are on board with the plan to finally address the long-running problem of massively underfunded public safety pension systems.

“I believe people see the benefits and believe this is worth the risk,” he said.

The state has mandated municipal pension systems be funded at a 90 percent level by 2040. Without this bond plan, the city would have found it extremely difficult to fund the systems without significantly raising taxes.

While the aim of this concept is to properly fund the accounts, the chief concern is to get that substantial task completed without breaking taxpayers’ backs.

The mayor noted that in the first year of this plan, the first payment to the fund will be $9.4 million and the final payment in 2042 will be $10.4 million.

These are obviously massive numbers, but Curtis noted that if the council had done nothing, the 2022 payment would have been $10.3 million — or $900,000 than the payment is now set to be.

While the city had initially anticipated to save $20 million over the course of these payments due to the lower interest rates they would be paying on borrowed money, recent spikes in interest rates have meant the savings will be more likely to come in at $15 million.

Even so, Curtis noted, properly funding these pension without breaking the back of the budget is a major step forward regardless of how much savings will be realized over the course of 20 years.

Council members will get a final walk-through of the program prior to the council vote on May 16 from Robert Vail of Bernardi Securities Inc., of Chicago.

In announcing the Authorization for Use of Military Force bill Sunday on CBS’s “Face the Nation,” Kinzinger said the U.S. “should be ready” if a situation unfolds in which America must get involved.

The bill would give congressional approval for the president to send forces to Ukraine should Russia use chemical, biological or nuclear weapons.

He told “Face the Nation” that the bill “doesn’t compel the president to do it. It just says, if it is used, he has that leverage. It gives him, you know, a better flexibility, but also it is a deterrent to [Russian President] Vladimir Putin.”

In a separate statement following the announcement of the AUMF, Kinzinger said he was introducing the joint resolution “as a clear redline so the administration can take appropriate action should Russia use chemical, biological, and/or nuclear weapons.”

“If Vladimir Putin wants to escalate with the West, he will,” Kinzinger said. “It’s easy for him to do it. And I think right now what we’re doing with supplying, with lend-lease, with the financing is right,” he said.