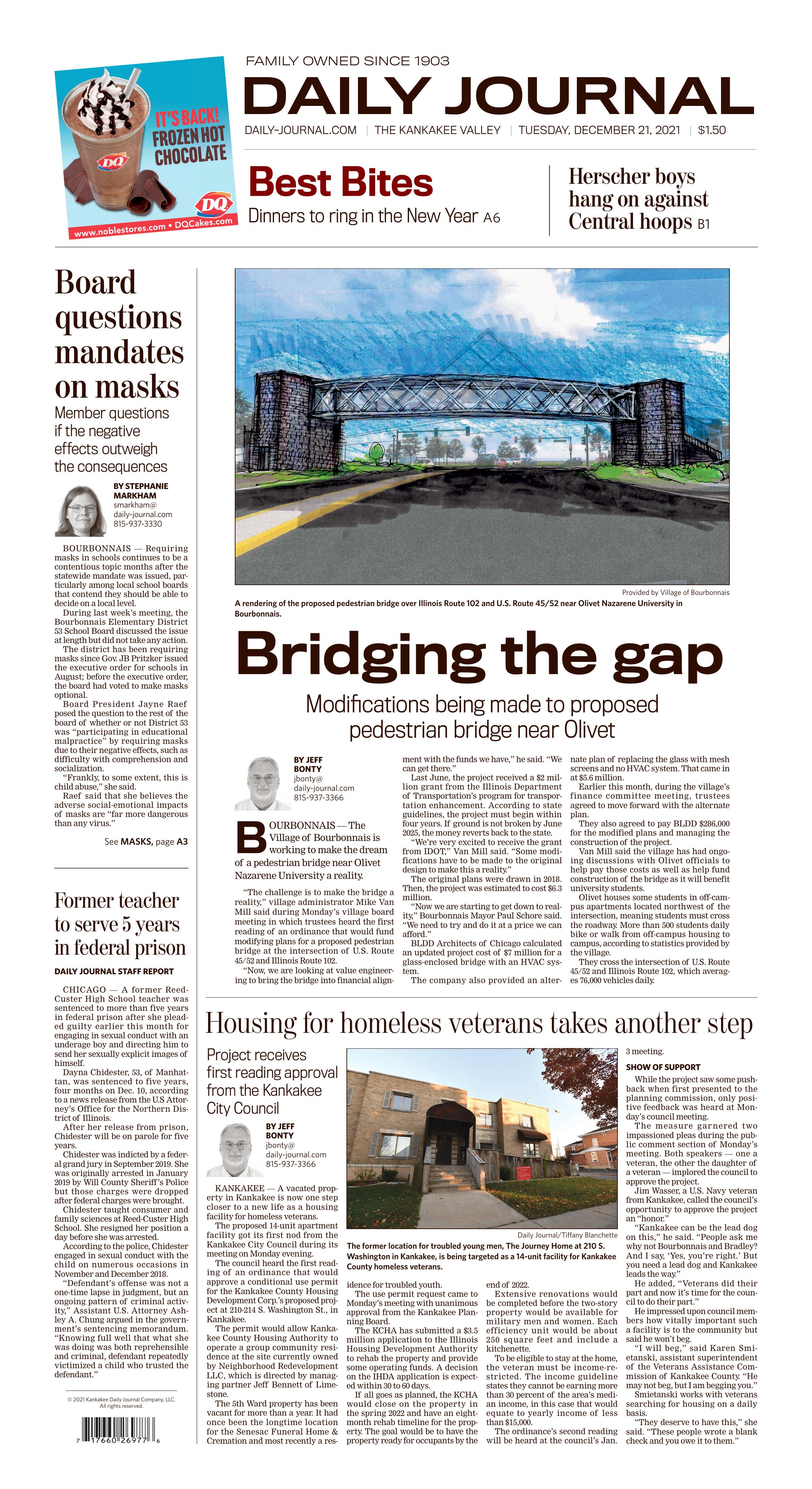 The former location for troubled young men, The Journey Home at 210 S. Washington in Kankakee, is being targeted as a 14-unit facility for Kankakee County homeless veterans.

KANKAKEE — A vacated property in Kankakee is now one step closer to a new life as a housing facility for homeless veterans.

The proposed 14-unit apartment facility got its first nod from the Kankakee City Council during its meeting on Monday evening.

The council heard the first reading of an ordinance that would approve a conditional use permit for the Kankakee County Housing Development Corp.’s proposed project at 210-214 S. Washington St., in Kankakee.

The permit would allow Kankakee County Housing Authority to operate a group community residence at the site currently owned by Neighborhood Redevelopment LLC, which is directed by managing partner Jeff Bennett of Limestone.

The 5th Ward property has been vacant for more than a year. It had once been the longtime location for the Senesac Funeral Home & Cremation and most recently a residence for troubled youth.

The use permit request came to Monday’s meeting with unanimous approval from the Kankakee Planning Board.

The KCHA has submitted a $3.5 million application to the Illinois Housing Development Authority to rehab the property and provide some operating funds. A decision on the IHDA application is expected within 30 to 60 days.

If all goes as planned, the KCHA would close on the property in the spring 2022 and have an eight-month rehab timeline for the property. The goal would be to have the property ready for occupants by the end of 2022.

Extensive renovations would be completed before the two-story property would be available for military men and women. Each efficiency unit would be about 250 square feet and include a kitchenette.

To be eligible to stay at the home, the veteran must be income-restricted. The income guideline states they cannot be earning more than 30 percent of the area’s median income, in this case that would equate to yearly income of less than $15,000.

The ordinance’s second reading will be heard at the council’s Jan. 3 meeting.

While the project saw some pushback when first presented to the planning commission, only positive feedback was heard at Monday’s council meeting.

The measure garnered two impassioned pleas during the public comment section of Monday’s meeting. Both speakers — one a veteran, the other the daughter of a veteran — implored the council to approve the project.

Jim Wasser, a U.S. Navy veteran from Kankakee, called the council’s opportunity to approve the project an “honor.”

“Kankakee can be the lead dog on this,” he said. “People ask me why not Bourbonnais and Bradley? And I say, ‘Yes, you’re right.’ But you need a lead dog and Kankakee leads the way.”

He added, “Veterans did their part and now it’s time for the council to do their part.”

He impressed upon council members how vitally important such a facility is to the community but said he won’t beg.

“I will beg,” said Karen Smietanski, assistant superintendent of the Veterans Assistance Commission of Kankakee County. “He may not beg, but I am begging you.”

Smietanski works with veterans searching for housing on a daily basis.

“They deserve to have this,” she said. “These people wrote a blank check and you owe it to them.”

The Bourbonnais Elementary District 53 School Board and Superintendent Adam Ehrman discuss the statewide mask mandate for schools during a regular board meeting Dec. 14 in the district’s administration building.

BOURBONNAIS — Requiring masks in schools continues to be a contentious topic months after the statewide mandate was issued, particularly among local school boards that contend they should be able to decide on a local level.

During last week’s meeting, the Bourbonnais Elementary District 53 School Board discussed the issue at length but did not take any action.

Board President Jayne Raef posed the question to the rest of the board of whether or not District 53 was “participating in educational malpractice” by requiring masks due to their negative effects, such as difficulty with comprehension and socialization.

“Frankly, to some extent, this is child abuse,” she said.

Raef said that she believes the adverse social-emotional impacts of masks are “far more dangerous than any virus.”

“I have kids coming into my house wearing masks. I say take it off. They say, ‘Well, I’m going to hurt you.’ You’re not going to hurt me,” Raef said.

Board member Priscilla Dwyer said that, while she understands not wanting to wear a mask all day, she also does not want students to lose the ability to participate in athletic competitions and other opportunities.

She also noted that the district could be held liable if a member of the district were to get seriously ill or die from COVID-19.

“For me, it’s not about this. It’s about the repercussions of ignoring the mandate, whether or not the mandate is right,” Dwyer said.

Board Vice President Stephan Moulton said he was frustrated that the state’s mask mandate only seems to be enforced when it comes to schools. Meanwhile, unmasked people are not stopped at places like grocery stores or gas stations.

“I want our kids to be successful. If it’s hindering the progression of learning, then, as a community of educational experts, we need to be providing our expertise,” Moulton said. “Let the scientists do their science; let the educational experts do what they do, and that is teach.”

Moulton said that he doesn’t take discussions around COVID-19 lightly; however, he believes the district needs to “fight for an exit strategy” from the mandated precautions.

“You know, March 24 hits home for me because that’s the day my dad died of COVID,” he said. “And here I am still advocating for our 2,450 students.”

Raef also spoke to the need for an exit strategy from the COVID-19 rules and mandates. “We have experts saying this isn’t going away. Is this our new normal? This is not normal,” she said.

Raef noted that taking precautions around the flu virus is deemed a personal choice, and said she believes COVID-19 should be treated in the same manner.

Board members Betsy Keller and Erika Young both expressed that they would like to revisit the masking issue and discuss possible action at a later time when regional positivity rates are lower.

“I just don’t feel like, in the peak of what’s going on right now, this isn’t necessarily the time to make a decision on unmasking,” Keller said.

Superintendent Adam Ehrman said that he cannot make a recommendation to get rid of masks; however, he noted the importance of the board’s discussion and acknowledged the frustration school leaders are facing as they await future changes.

Local schools are largely unable to plan in regards to COVID-19 because so much is being done through mandates; at the same time, there are no clear answers as to what future plans coming from state officials might be.

CHICAGO — A former Reed-Custer High School teacher was sentenced to more than five years in federal prison after she pleaded guilty earlier this month for engaging in sexual conduct with an underage boy and directing him to send her sexually explicit images of himself.

Dayna Chidester, 53, of Manhattan, was sentenced to five years, four months on Dec. 10, according to a news release from the U.S Attorney’s Office for the Northern District of Illinois.

After her release from prison, Chidester will be on parole for five years.

Chidester was indicted by a federal grand jury in September 2019. She was originally arrested in January 2019 by Will County Sheriff’s Police but those charges were dropped after federal charges were brought.

Chidester taught consumer and family sciences at Reed-Custer High School. She resigned her position a day before she was arrested.

According to the police, Chidester engaged in sexual conduct with the child on numerous occasions in November and December 2018.

“Defendant’s offense was not a one-time lapse in judgment, but an ongoing pattern of criminal activity,” Assistant U.S. Attorney Ashley A. Chung argued in the government’s sentencing memorandum. “Knowing full well that what she was doing was both reprehensible and criminal, defendant repeatedly victimized a child who trusted the defendant.”