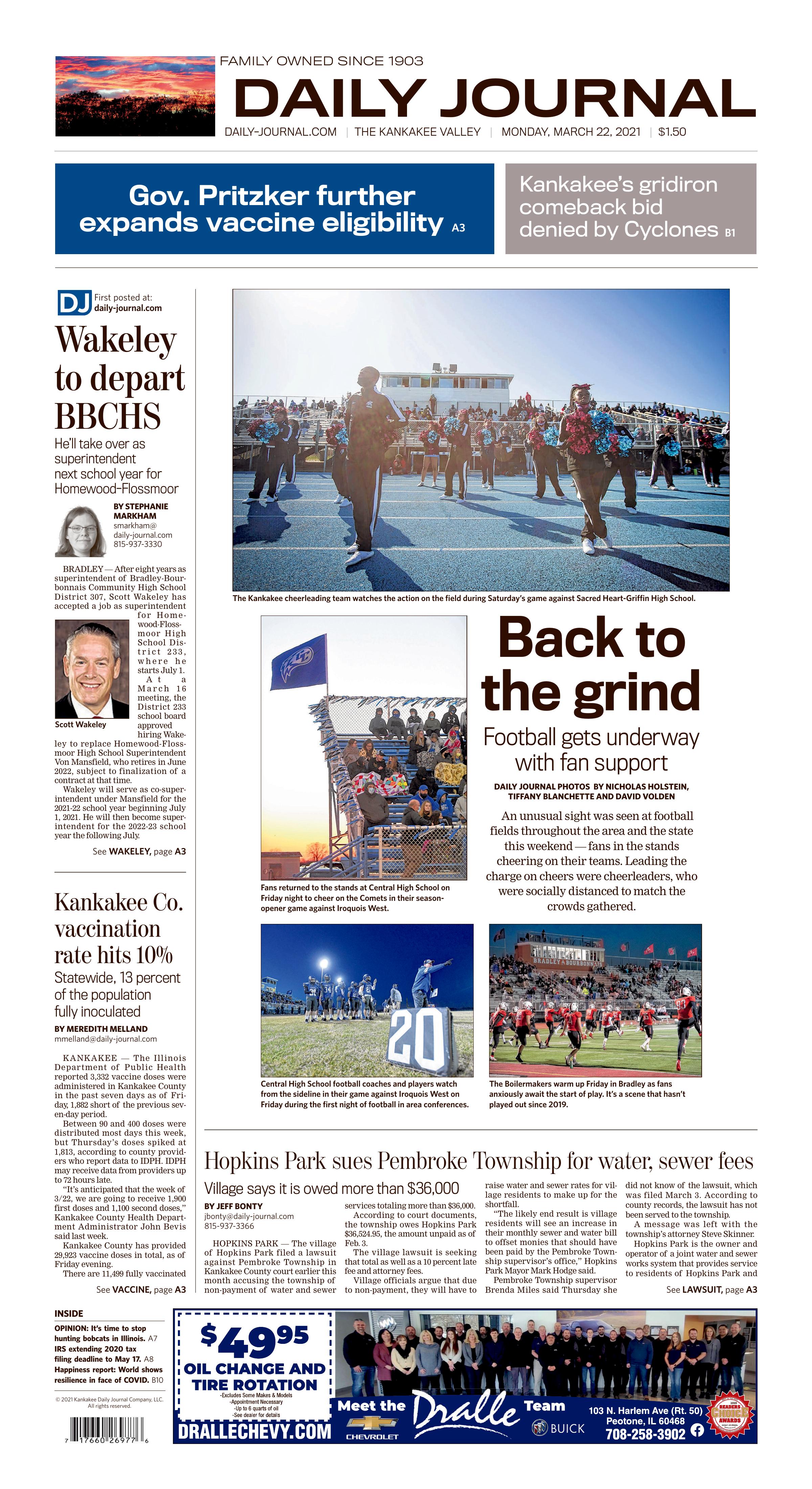 HOPKINS PARK — The village of Hopkins Park filed a lawsuit against Pembroke Township in Kankakee County court earlier this month accusing the township of non-payment of water and sewer services totaling more than $36,000.

According to court documents, the township owes Hopkins Park $36,524.95, the amount unpaid as of Feb. 3.

The village lawsuit is seeking that total as well as a 10 percent late fee and attorney fees.

Village officials argue that due to non-payment, they will have to raise water and sewer rates for village residents to make up for the shortfall.

“The likely end result is village residents will see an increase in their monthly sewer and water bill to offset monies that should have been paid by the Pembroke Township supervisor’s office,” Hopkins Park Mayor Mark Hodge said.

Pembroke Township supervisor Brenda Miles said Thursday she did not know of the lawsuit, which was filed March 3. According to county records, the lawsuit has not been served to the township.

A message was left with the township’s attorney Steve Skinner.

Hopkins Park is the owner and operator of a joint water and sewer works system that provides service to residents of Hopkins Park and Pembroke Township.

The water plant and sewage treatment facility are owned and operated by the village.

Hopkins Park provides water and sewage to the township, which bills township residents monthly. Pembroke Township then pays the village for providing the services to them.

The village filed a Freedom of Information Act request with the township and learned the township has 264 customers (residents and businesses) and bills the customers $10,736 for water and sewer services, according to the lawsuit.

The village argued it has received only $2,700 per month from the township.

Village officials sent the township a letter in November 2020 detailing current and past due charges on eight accounts of $35,650.72.

On Feb. 3, the village sent the township a notice of delinquency for failure to pay the new rate.

The village argued in its lawsuit that for the past three years it has attempted to resolve the issue of bills and appropriate rates, including meetings to discuss rate studies requested by the village and prepared by the Rural Community Assistance Partnership; public meeting and requests to Miles who says the township simply can’t pay.

At a March 16 meeting, the District 233 school board approved hiring Wakeley to replace Homewood-Flossmoor High School Superintendent Von Mansfield, who retires in June 2022, subject to finalization of a contract at that time.

Wakeley will be gone from BBCHS for the 2021-22 school year.

Justin Caldwell, president of the BBCHS school board, said Friday that board members plan to meet and speak with an attorney next week to figure out the next steps for a search process for Wakeley’s replacement.

“We are excited for him to further his career,” Caldwell said. “I can say it’s an extreme loss to the district. We are very happy with him. He’s done a lot with the district over his eight years, and we’re very sad to see him go.”

Caldwell said he is not yet sure whether the search would be done nationally or focused more toward local candidates. He said the right person for the job would have a vision for helping the district move forward with its strategic plan.

“We are in the middle of a strategic plan that was hindered a little bit by the COVID outbreak, but we want to continue to see that plan move forward,” he said. “We’ve made great strides with that, that Dr. Wakeley helped us to implement.”

Wakeley said he has known Mansfield for the past eight years, as both high schools are in the same athletics conference. Mansfield reached out to tell him about the opportunity due to his upcoming retirement.

“It’s always good to continue to challenge yourself,” he said.

Wakeley said he and his wife decided not to dismiss the opportunity. He then went through a series of interviews and was selected.

“It was my experience and all the great things that we have done at BBCHS that have made me a good candidate for a bigger school that has national recognition,” he noted.

Wakeley said he had not been looking to move or find a new job when the opportunity presented.

“I was planning on retiring at BBCHS,” he said. “That was the idea when we came here eight years ago, and that hadn’t changed. Quite frankly, I think if it wasn’t H-F with the opportunities and challenges that come with it, I certainly would still be at BBCHS.”

He said BBCHS is in a strong financial position with a lot of trust built between teachers, the school board and administrators.

“I think for the next person, it’s certainly not a tear-down position or a rebuild, so to speak. It’s them putting their own stamp, working with the staff, looking at the strategic plan and bringing their own ideas,” Wakeley said.

Similar to BBCHS, Homewood-Flossmoor High School is a one-school district where students from separate elementary districts in the villages of Homewood and Flossmoor go to attend high school.

The high schools are also in the same Southwest Suburban Conference for athletics, and both are larger schools.

Homewood-Flossmoor High School has a larger percentage of students of color, but a smaller low-income population compared to BBCHS.

Homewood and Flossmoor are located in the south Chicago suburbs, a little over 30 miles north of Bourbonnais and Bradley.

KANKAKEE — The Illinois Department of Public Health reported 3,332 vaccine doses were administered in Kankakee County in the past seven days as of Friday, 1,882 short of the previous seven-day period.

Between 90 and 400 doses were distributed most days this week, but Thursday’s doses spiked at 1,813, according to county providers who report data to IDPH. IDPH may receive data from providers up to 72 hours late. 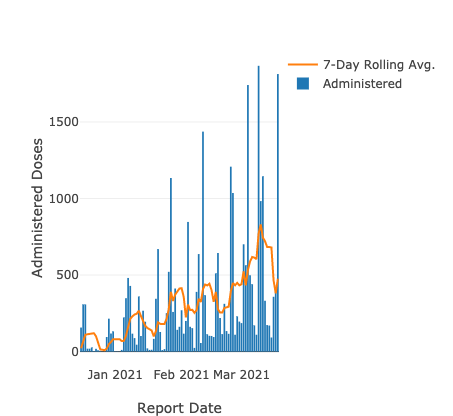 The daily number of doses administered in Kankakee County and the seven-day daily dose average.

Kankakee County has provided 29,923 vaccine doses in total, as of Friday evening.

There are 11,499 fully vaccinated people in the county, which IDPH reports to be 10.45 percent of the county population. The state of Illinois is at 13.27 percent.

The seven-day rolling average of daily doses administered was rising recently and peaked March 10 at 830 doses. It dropped over the past week and stood at 461 doses on Friday.

Bevis does not expect the Johnson & Johnson vaccine to come to Kankakee County until April.

Gov. JB Pritzker announced Thursday that Illinois will enter a new “bridge phase” before Phase 5 when 70 percent of the state’s over 65 population has received at least one vaccine dose. As of Thursday, 58 percent of 65+ Illinoisans have had one dose.

At least 20 percent of intensive care beds must be available and other metrics like the case positivity rate need to stay consistent as well, according to the announcement.

In a reversal of last week’s demographic shift, 50.9 percent of vaccine recipients in the county are ages 16-64 as of Friday. The 16-64 group held a slight majority throughout February and early March until the 65+ barely overtook it last week.

Bevis said the county is “close” to the state’s rate of vaccinating the elderly. “Maybe within a couple of weeks we’ll be there anyway statewide.” 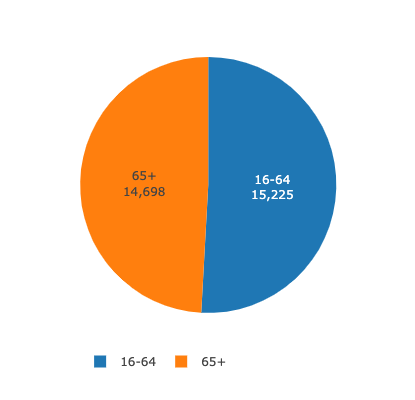 Vaccine recipients by age group in Kankakee County as of March 19.

Vaccine eligibility will expand on April 12 to include anyone living outside of Chicago over the age 16, according to the governor. 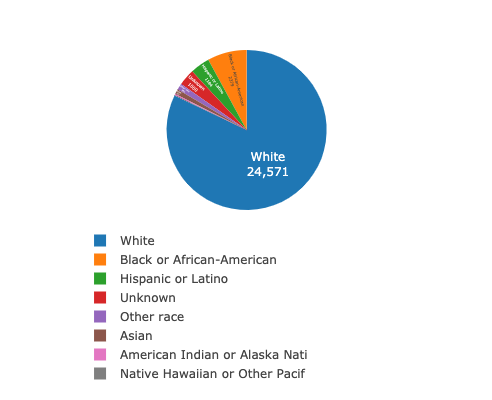 Just under 60 percent of receivers of at least one dose are female, 59.8 percent.