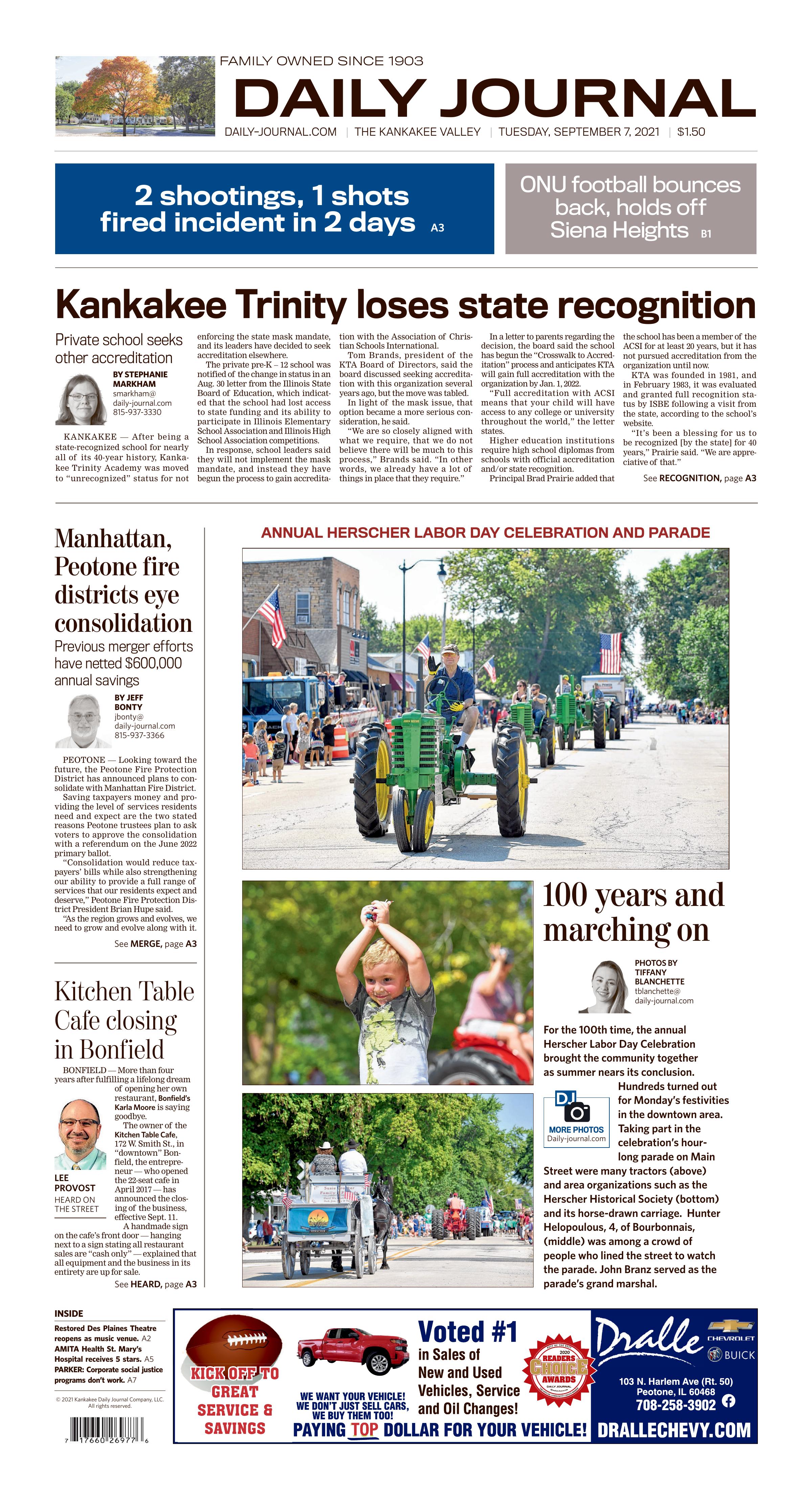 Kankakee Trinity Academy is no longer a state-recognized school after declining to enforce the state mask mandate. School leaders say they expect to gain accreditation from the Association of Christian Schools International later this school year.

KANKAKEE — After being a state-recognized school for nearly all of its 40-year history, Kankakee Trinity Academy was moved to “unrecognized” status for not enforcing the state mask mandate, and its leaders have decided to seek accreditation elsewhere.

The private pre-K – 12 school was notified of the change in status in an Aug. 30 letter from the Illinois State Board of Education, which indicated that the school had lost access to state funding and its ability to participate in Illinois Elementary School Association and Illinois High School Association competitions.

In response, school leaders said they will not implement the mask mandate, and instead they have begun the process to gain accreditation with the Association of Christian Schools International.

Tom Brands, president of the KTA Board of Directors, said the board discussed seeking accreditation with this organization several years ago, but the move was tabled.

In light of the mask issue, that option became a more serious consideration, he said.

“We are so closely aligned with what we require, that we do not believe there will be much to this process,” Brands said. “In other words, we already have a lot of things in place that they require.”

In a letter to parents regarding the decision, the board said the school has begun the “Crosswalk to Accreditation” process and anticipates KTA will gain full accreditation with the organization by Jan. 1, 2022.

“Full accreditation with ACSI means that your child will have access to any college or university throughout the world,” the letter states.

Principal Brad Prairie added that the school has been a member of the ACSI for at least 20 years, but it has not pursued accreditation from the organization until now.

KTA was founded in 1981, and in February 1983, it was evaluated and granted full recognition status by ISBE following a visit from the state, according to the school’s website.

“It’s been a blessing for us to be recognized [by the state] for 40 years,” Prairie said. “We are appreciative of that.”

Prairie said the only state money KTA receives is Title II funding, which is designated for training teachers and principals, but the school does not rely heavily on state funds in the same way public schools do.

The letter from ISBE also indicated the school would no longer be eligible for the Children’s Tuition Fund, a tax-credit program for private schools, Prairie said.

“[State funding] is very minimal,” Brands added. “It’s not anything that impacts our decision whatsoever. The state does almost nothing for us.”

For athletics, Prairie said students will still compete against other Christian schools.

“It would involve some travel,” Prairie noted. “We would definitely be traveling more than if we were playing locally. You have northwestern Indiana schools, the suburbs of Chicago; there’s lots of directions where there’s Christian schools.”

School officials declined to comment on COVID-19 concerns or other precautions the school is taking in the absence of a masking requirement.

About 350 students attend the school.

“We respect the governor’s position in trying to keep everyone safe, and I don’t envy his position,” Prairie said. “We pray for him daily and are asking for God to help us through this.”

PEOTONE — Looking toward the future, the Peotone Fire Protection District has announced plans to consolidate with Manhattan Fire District.

Saving taxpayers' money and providing the level of services residents need and expect are the two stated reasons Peotone trustees plan to ask voters to approve the consolidation with a referendum on the June 2022 primary ballot.

“As the region grows and evolves, we need to grow and evolve along with it. By consolidating our fire districts, we would be well-positioned to deliver robust, quality service over the long haul without having taxpayers pay more.”

In a news release this week, they said without the consolidation, residents in Peotone over the next five to 10 years would be forced to choose between tax increases or a diminished level of service.

Also, Manhattan’s district will need to determine how to deliver and pay for a consistent level of staffing and coverage amid increasing demand for services as the region’s population — and calls for service — increase.

Already — as Aug. 13, 2020 — the two districts have an agreement in which Manhattan provides a fire chief, deputy chief, battalion chief and administrative staff. According to a press release, that agreement generated approximately $600,000 in cost recovery and savings in its first year.

“As things progressed after the agreement, we talked and found this consolidation to be a logical step,” said Steve Malone, who serves as fire chief for both districts. “The communities we serve are better off over the long term with us operating as one district instead of two.

“We’ll be able to further reduce our administrative costs, eliminate duplicative costs and reinvest those dollars into hiring full-time firefighters and paramedics, upgrade our facilities and equipment, and ensure that our personnel has everything they need to serve the residents of Peotone and Manhattan proficiently and professionally.”

All three districts were looking to hire staff, purchase equipment and replace apparatus that was starting to become costly to refurbish.

“The bottom line is that our personnel are our most valued assets,” Hupe said. “Our residents want professional, qualified, trained personnel who are a part of the community they’re serving.

“By consolidating the two districts, we would be able to shift toward a more sustainable and predictable full-time staffing model by hiring men and women truly vested in the communities they’ll serve.”

In this May 2017 file photograph, Jeanine Dunn jokes with Duane Sharper after he paid his lunch tab at the Kitchen Table Cafe in Bonfield. The business is set to close on Sept. 11.

BONFIELD — More than four years after fulfilling a lifelong dream of opening her own restaurant, Bonfield’s Karla Moore is saying goodbye.

The owner of the Kitchen Table Cafe, 172 W. Smith St., in “downtown” Bonfield, the entrepreneur — who opened the 22-seat cafe in April 2017 — has announced the closing of the business, effective Sept. 11.

A handmade sign on the cafe’s front door — hanging next to a sign stating all restaurant sales are “cash only” — explained that all equipment and the business in its entirety are up for sale.

“Thank you, everyone. It’s been my dream to have this restaurant and serve you all but there’s too many problems behind the scenes — Karla,” the sign read.

Contacted late last week, Moore said the reasons for the closing are a private matter at this point. She did note the decision has nothing to do with a lack of resources or customers.

In the tiny town of about 300, the opening of the restaurant was major news. I traveled to Bonfield in May 2017 and met with Moore and had conversations with several of her customers. I even had a hamburger and fries.

To say Moore was thrilled with her accomplishment of opening the restaurant would be an understatement.

“I’ve had a lot of people ask me, ‘Why Bonfield?’ I just think every town needs a good place to gather,” she said then. “This has brought life back to the downtown.”

A 1987 graduate of Bishop McNamara Catholic High School, Moore had previously owned the Foto Quick in the former Meadowview Shopping Center in Kankakee and then along West Broadway Street in Bradley.

Whatever caused Moore to bring an end to her restaurant may be learned in the future, but it is safe to say that this old-school establishment put smiles on a lot of faces and in the process took care of many hungry diners.

I wish Moore nothing but the best. It was a real treat to have shared conversation with her as well as having a chance to enjoy a burger in downtown Bonfield.