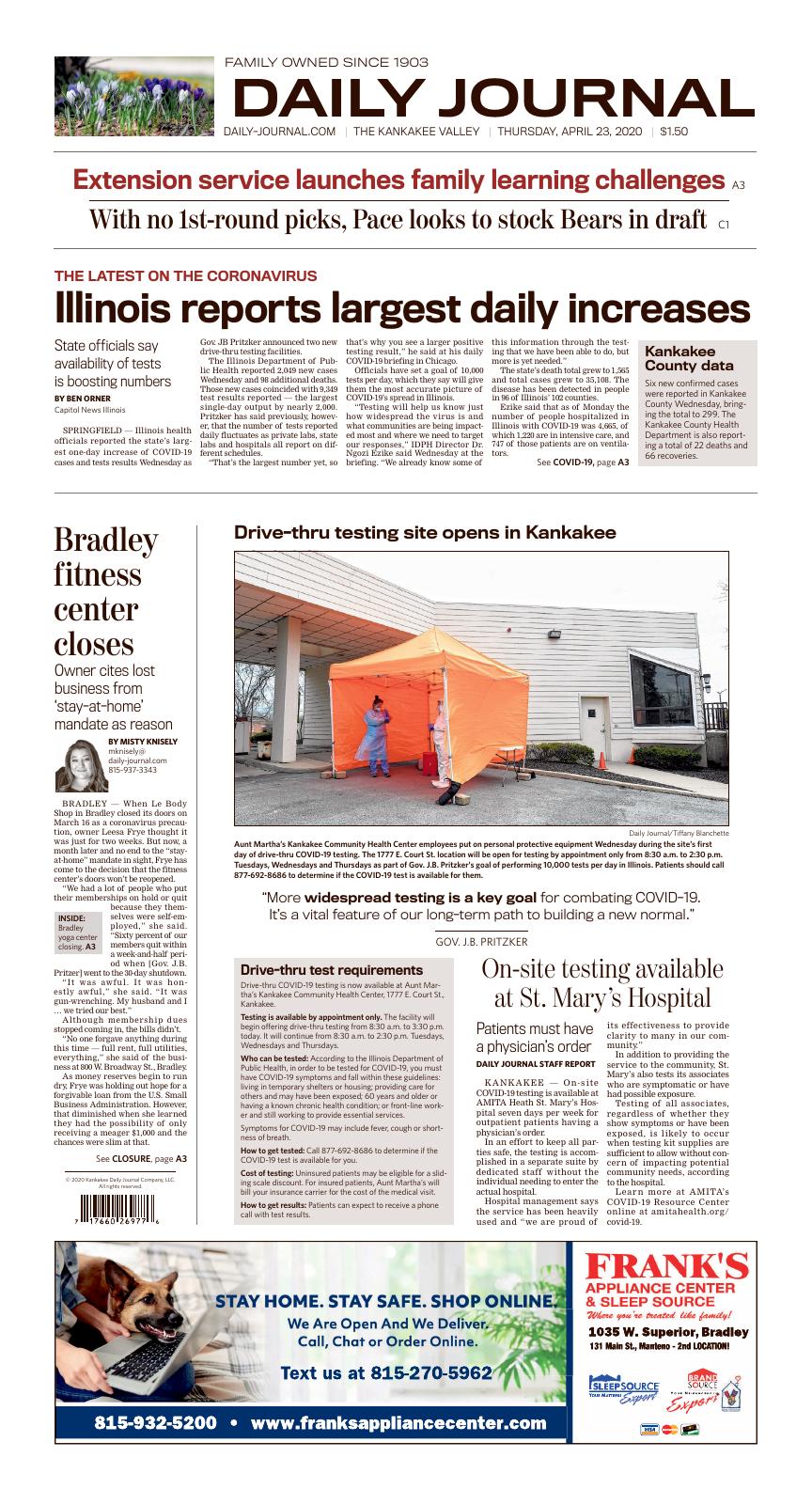 The Illinois Department of Public Health reported 2,049 new cases Wednesday and 98 additional deaths. Those new cases coincided with 9,349 test results reported — the largest single-day output by nearly 2,000. Pritzker has said previously, however, that the number of tests reported daily fluctuates as private labs, state labs and hospitals all report on different schedules.

“That’s the largest number yet, so that’s why you see a larger positive testing result,” he said at his daily COVID-19 briefing in Chicago.

Officials have set a goal of 10,000 tests per day, which they say will give them the most accurate picture of COVID-19’s spread in Illinois.

“Testing will help us know just how widespread the virus is and what communities are being impacted most and where we need to target our responses,” IDPH Director Dr. Ngozi Ezike said Wednesday at the briefing. “We already know some of this information through the testing that we have been able to do, but more is yet needed.”

Ezike said that as of Monday the number of people hospitalized in Illinois with COVID-19 was 4,665, of which 1,220 are in intensive care, and 747 of those patients are on ventilators.

She also said that more than 2,500 health workers have contracted COVID-19, including “potentially eight deaths” – the first time the state has released such numbers. She added that “health workers” can include people from hospital nurses to front desk attendants to nursing home workers.

No decision on stay-at-home order

Pritzker has yet to announce a decision on extending the stay-at-home order that expires at the end of April, nor what changes might come with an extension.

Pritzker said he wants to “find the right balances” to make sure the costs of staying home do not outweigh the costs of reopening the state.

“I understand that it’s challenging for people. There’s a mental health cost in addition to a financial cost for everybody,” he said. “I think we’re all recognizing that normal is going look a little bit different going forward until there’s a vaccine.”

Missouri Gov. Mike Parson is currently planning for a phased-in reopening on May 4, which would make his state one of just a handful to try such a move. Pritzker said he has not talked with Parson about his plan.

Pritzker is instead coordinating Illinois’ strategy with the governors of Ohio, Kentucky, Indiana, Michigan, Wisconsin and Minnesota. Pritzker said that Parson and Iowa Gov. Kim Reynolds declined to join that pact.

“Remember that one of the biggest reasons that we closed state parks originally was the state workers who work there,” he said. “They have to work in close proximity, even though you might think of a state park as being quite large.

“We’ve talked a lot about how we might make changes that would allow people to use state parks,” he said.

Six new confirmed cases were reported in Kankakee County Wednesday, bringing the total to 299. The Kankakee County Health Department is also reporting a total of 22 deaths and 66 recoveries. 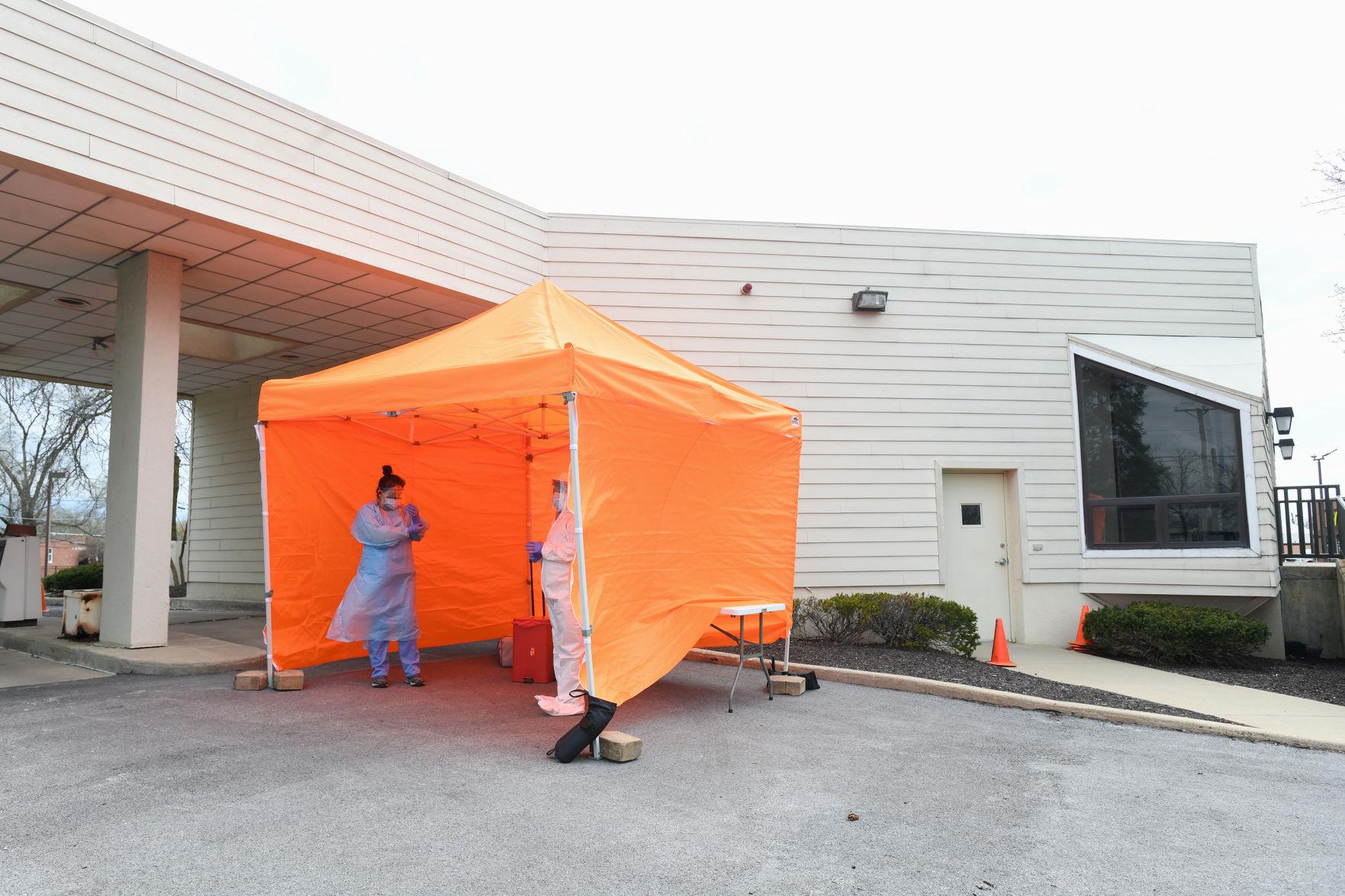 Aunt Martha’s Kankakee Community Health Center employees put on personal protective equipment Wednesday during the site’s first day of drive-thru COVID-19 testing. The 1777 E. Court St. location will be open for testing by appointment only from 8:30 a.m. to 2:30 p.m. Tuesdays, Wednesdays and Thursdays as part of Gov. J.B. Pritzker’s goal of performing 10,000 tests per day in Illinois. Patients should call 877-692-8686 to determine if the COVID-19 test is available for them.

In an effort to keep all parties safe, the testing is accomplished in a separate suite by dedicated staff without the individual needing to enter the actual hospital.

Hospital management says the service has been heavily used and “we are proud of its effectiveness to provide clarity to many in our community.”

In addition to providing the service to the community, St. Mary’s also tests its associates who are symptomatic or have had possible exposure.

Testing of all associates, regardless of whether they show symptoms or have been exposed, is likely to occur when testing kit supplies are sufficient to allow without concern of impacting potential community needs, according to the hospital.

BRADLEY — When Le Body Shop in Bradley closed its doors on March 16 as a coronavirus precaution, owner Leesa Frye thought it was just for two weeks. But now, a month later and no end to the “stay-at-home” mandate in sight, Frye has come to the decision that the fitness center’s doors won’t be reopened.

“We had a lot of people who put their memberships on hold or quit because they themselves were self-employed,” she said. “Sixty percent of our members quit within a week-and-half period when [Gov. J.B. Pritzer] went to the 30-day shutdown.

“It was awful. It was honestly awful,” she said. “It was gun-wrenching. My husband and I … we tried our best.”

As membership dues stopped coming in and money reserves begin to run dry, Frye was holding out hope for a forgivable loan from the U.S. Small Business Administration. However, that diminished when she learned they had the possibility of only receiving a meager $1,000 and the chances were slim at that.

The business has one full-time employee.

While there are other loan programs available, she said she didn’t feel it prudent to invest any additional money into the business which is already carrying a loan.

“We had already put a lot of money into the business, and when we weren’t going to get any type of help from the government, we had to be realistic,” she said.

She said her lack of confidence in society returning to status quo after the coronavirus pandemic subsides further secured her decision to close.

“After the pandemic, I don’t think it’s going to be any better,” she said. “There’s going to be such tight restrictions in place. It’s a shame. We’re not going to be the only business to close because of this pandemic.”

The Fryes opened Le Body Shop at the location in January 2018 as a fitness studio for women. It opening was a “dream and passion.”

“It was just a great place for women,” she said. “We always provided a positive upbeat environment for women to feel not judged. We really prided ourselves on that.”

Frye is in the process of selling the fitness center’s equipment. For now, she will take some time off from her work as a personal trainer.

“This was very upsetting to me,” she said. “I will do something at some point, just not right now.”

It’s been a rough week for fitness centers in Bradley, as Barefoot Yoga has also announced its closure.

The news came through a post on the studio’s Facebook page from owners Kristine Stukenborg and Nicole Gavin.

“It is with great sadness and regret that we are sharing this update with you today,” read Wednesday’s post. “After recent events, much consideration and many tears, we are unfortunately closing Barefoot Yoga Loft permanently.”

The post netted an outpouring of support from its members and stories of how the studio improved their lives. Among them was Steve Szobar.

“The energy was incredible there,” his comment read. “Thank you Nicole and Kristine for creating a beautiful place. You two really shined a light on my life.”

Stukenborg and Gavin said the studio will continue its virtual classes through May 2 and have plans to add some additional classes beyond that. The studio’s Facebook group will remain open indefinitely.