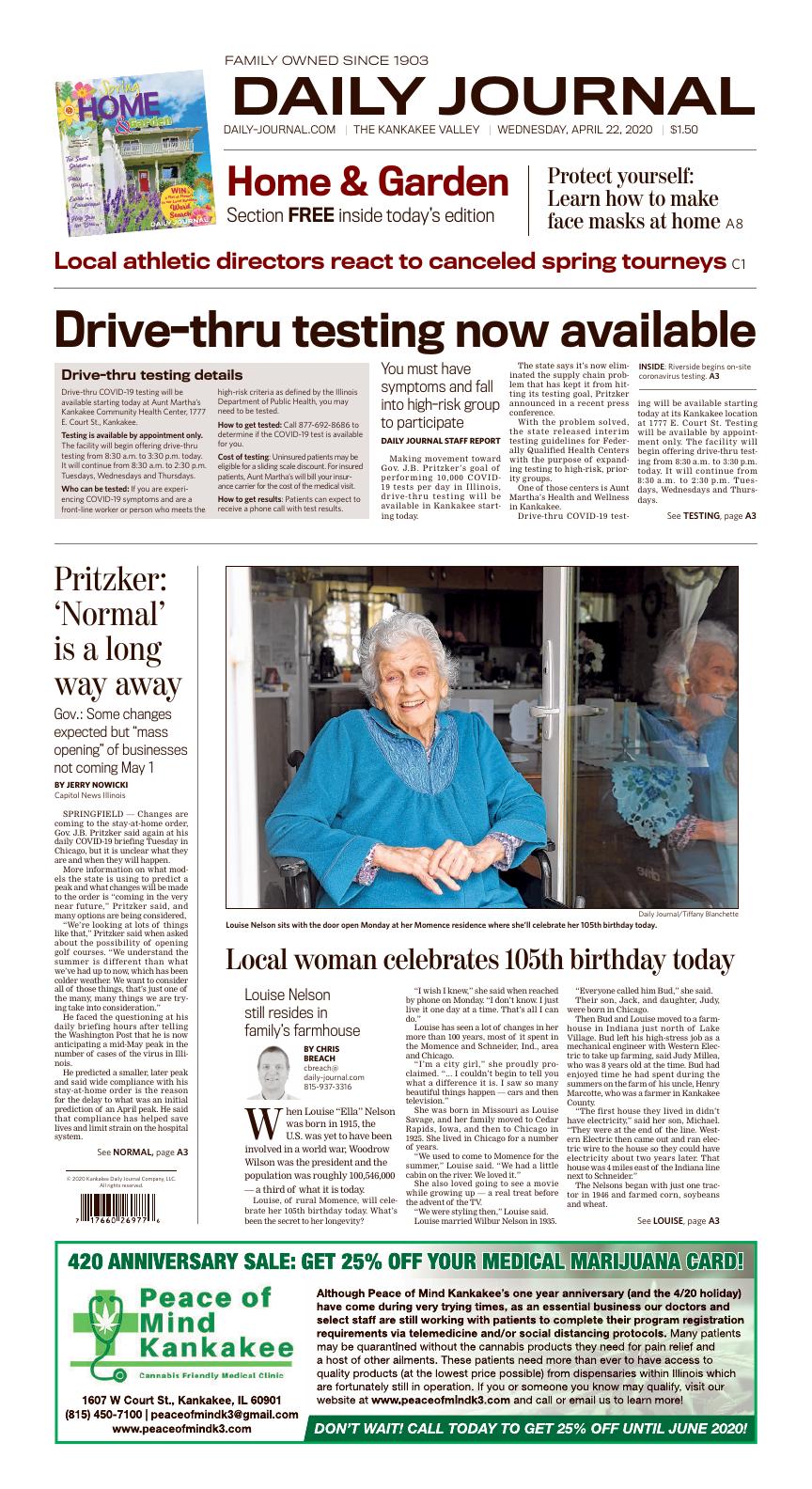 Louise Nelson sits with the door open Monday at her Momence residence where she’ll celebrate her 105th birthday today.

When Louise “Ella” Nelson was born in 1915, the U.S. was yet to have been involved in a world war, Woodrow Wilson was the president and the population was roughly 100,546,000 — a third of what it is today.

Louise, of rural Momence, will celebrate her 105th birthday today. What’s been the secret to her longevity?

Louise has seen a lot of changes in her more than 100 years, most of it spent in the Momence and Schneider, Ind., area and Chicago.

“I’m a city girl,” she proudly proclaimed. “... I couldn’t begin to tell you what a difference it is. I saw so many beautiful things happen — cars and then television.”

She was born in Missouri as Louise Savage, and her family moved to Cedar Rapids, Iowa, and then to Chicago in 1925. She lived in Chicago for a number of years.

“We used to come to Momence for the summer,” Louise said. “We had a little cabin on the river. We loved it.”

She also loved going to see a movie while growing up — a real treat before the advent of the TV.

“We were styling then,” Louise said.

“Everyone called him Bud,” she said.

Their son, Jack, and daughter, Judy, were born in Chicago.

Then Bud and Louise moved to a farmhouse in Indiana just north of Lake Village. Bud left his high-stress job as a mechanical engineer with Western Electric to take up farming, said Judy Millea, who was 8 years old at the time. Bud had enjoyed time he had spent during the summers on the farm of his uncle, Henry Marcotte, who was a farmer in Kankakee County.

“The first house they lived in didn’t have electricity,” said her son, Michael. “They were at the end of the line. Western Electric then came out and ran electric wire to the house so they could have electricity about two years later. That house was 4 miles east of the Indiana line next to Schneider.”

The Nelsons began with just one tractor in 1946 and farmed corn, soybeans and wheat.

“We had a few cattle and pigs,” Millea said. “It was just an old-fashioned farm. One of the first years we lost the whole crop due to terrible weather.”

Louise helped with the farm.

“She drove the tractor, she fed the cattle and she did everything a farmer would do,” Millea said. “It was quite an experience for sure.”

Bud and Louise also helped to establish St. Augusta Catholic Church in Lake Village at the intersection of U.S. Route 41 and Indiana Route 10.

“They helped build it in 1946 so it could be used to hold Mass,” Michael said.

The couple moved to their current farmhouse in Illinois just east of the state line in 1958. Michael lives upstairs of the house, and Louise lives on the first floor. He serves as her caretaker.

Louise’s son Mark, 64, also lives in the area as does Judy. Jack is deceased. Judy became a school teacher and retired from Chicago Public Schools. She lives in Riverside Senior Independent Living in Kankakee.

Louise, who enjoys working crossword puzzles and doing cross stitch, says she has a lot to be thankful for.

“All the blessings that I have received, and I love all the nice people I know,” she said.

Louise said she will celebrate her birthday “very quietly” and enjoy a cake prepared by her good friend, Mary Christianson.

“We’re going to have a family celebration in May or June,” Judy said.

She’ll remain quarantined due to the coronavirus.

“I never had anything like this. It’s terrible,” said Louise, who looks forward to being able to go outside her farmhouse.

“It will be nice to see the flowers,” she said. “I love to go around the house and see all the flowers growing.”

Gov. JB Pritzker talks about assistance that is being made available to people with private loans for college students during the coronavirus pandemic while addressing the media Tuesday in Chicago.

SPRINGFIELD — Changes are coming to the stay-at-home order, Gov. J.B. Pritzker said again at his daily COVID-19 briefing Tuesday in Chicago, but it is unclear what they are and when they will happen.

More information on what models the state is using to predict a peak and what changes will be made to the order is “coming in the very near future,” Pritzker said, and many options are being considered,

“We’re looking at lots of things like that,” Pritzker said when asked about the possibility of opening golf courses. “We understand the summer is different than what we’ve had up to now, which has been colder weather. We want to consider all of those things, that’s just one of the many, many things we are trying take into consideration.”

He faced the questioning at his daily briefing hours after telling the Washington Post that he is now anticipating a mid-May peak in the number of cases of the virus in Illinois.

He predicted a smaller, later peak and said wide compliance with his stay-at-home order is the reason for the delay to what was an initial prediction of an April peak. He said that compliance has helped save lives and limit strain on the hospital system.

“We will be making some changes to the order as it is. But it is true that it is working,” he said, adding that removing it entirely would “open everything back up to infection.”

The latest peak prediction came as the state announced 119 more deaths in the past 24 hours – more than the previous two days combined — bringing total fatalities to 1,468 in Illinois. There were also 1,551 more confirmed cases, bringing the total to 33,059.

Still, Pritzker said, there won’t be any return to “normal” until the state can adequately test and track the virus, and being able to do so is not immediately on the radar.

“There isn’t enough testing and there won’t be for some time,” he said, adding “to really open everything up,” the state is “going to need a whole lot more.”

That means, Pritzker said, “we have to leave things, you know, still in a place that seems not normal for everybody and won’t be for some time.”

“But we’re going to work hard to make it more normal and make it easier for people and certainly we want people to be able to get outside and enjoy themselves,” he said.

The state has now tested 154,997 people for the virus, an increase of 6,639 from the day before as it has yet to near the administration’s goal of 10,000 daily despite claims by Pritzker last week that the state was ramping up testing and had “eliminated our supply chain problems as they relate to viral transport medium (VTM) and swabs.”

Pritzker said he would not follow Georgia’s lead as that state reopens parts of its economy Friday, and he said he would heed the advice of the federal government in taking broader action once the number of new cases and deaths has decreased for 14 straight days.

“I want to caution that there isn’t – I don’t think there’s going to be some mass opening of, you know, lots and lots and lots of businesses come May 1,” he said when asked if there would be enough hand sanitizer and cleaning supplies when businesses reopen.

Dr. Ngozi Ezike, director of the Illinois Department of Public Health, also said there is a risk of a COVID-19 resurgence in the fall if there is still no treatment or vaccine, as is expected.

“It’s very concerning that that could be a significant second wave or a second surge,” she said.

He also announced families with school-age children who receive food assistance will qualify for additional benefits.

Pritzker said the recently-passed federal CARES Act provided relief for people struggling with federal student debt due to the pandemic, including automatic suspension of monthly payments and interest and halting involuntary collection activity until Sept. 30.

But he said that left out millions of people nationwide, including about 140,000 Illinoisans, who owe money on private and nonfederal student loans.

Pritzker said those former students will now qualify for similar relief through agreements reached by the Illinois Department of Financial and Professional Regulation with 20 student loan servicers.

The agreement allows borrowers to request a 90-day forbearance on payments with no negative credit reporting during that period. Other relief options include waived late payment fees, ceased debt collection lawsuits for 90 days and borrower assistance programs, such as income-based repayment.

Pritzker said borrowers having issues with their lenders can call the IDPFR Division of Banking at 217-785-2900 or file a complaint at idfpr.com/admin/banks/DoBcomplaints.asp.

Pritzker also announced the state has received federal approval to provide expanded benefits to about 300,000 Illinois families with school-age children through the Supplemental Nutrition Assistance Program or SNAP, providing about $112 million in additional food assistance to those families.

“For families already receiving SNAP benefits, this increased assistance will be automatically added to families’ link cards,” he said. “There's no need for you to call or visit.”

He said households with children who are eligible for free or reduced meals when school is in session, but who do not receive SNAP benefits, will be able to submit a simplified application for benefits as early as next week at ABE.Illinois.gov.

“No child should ever have to worry about where their next meal is coming from,” Pritzker said. 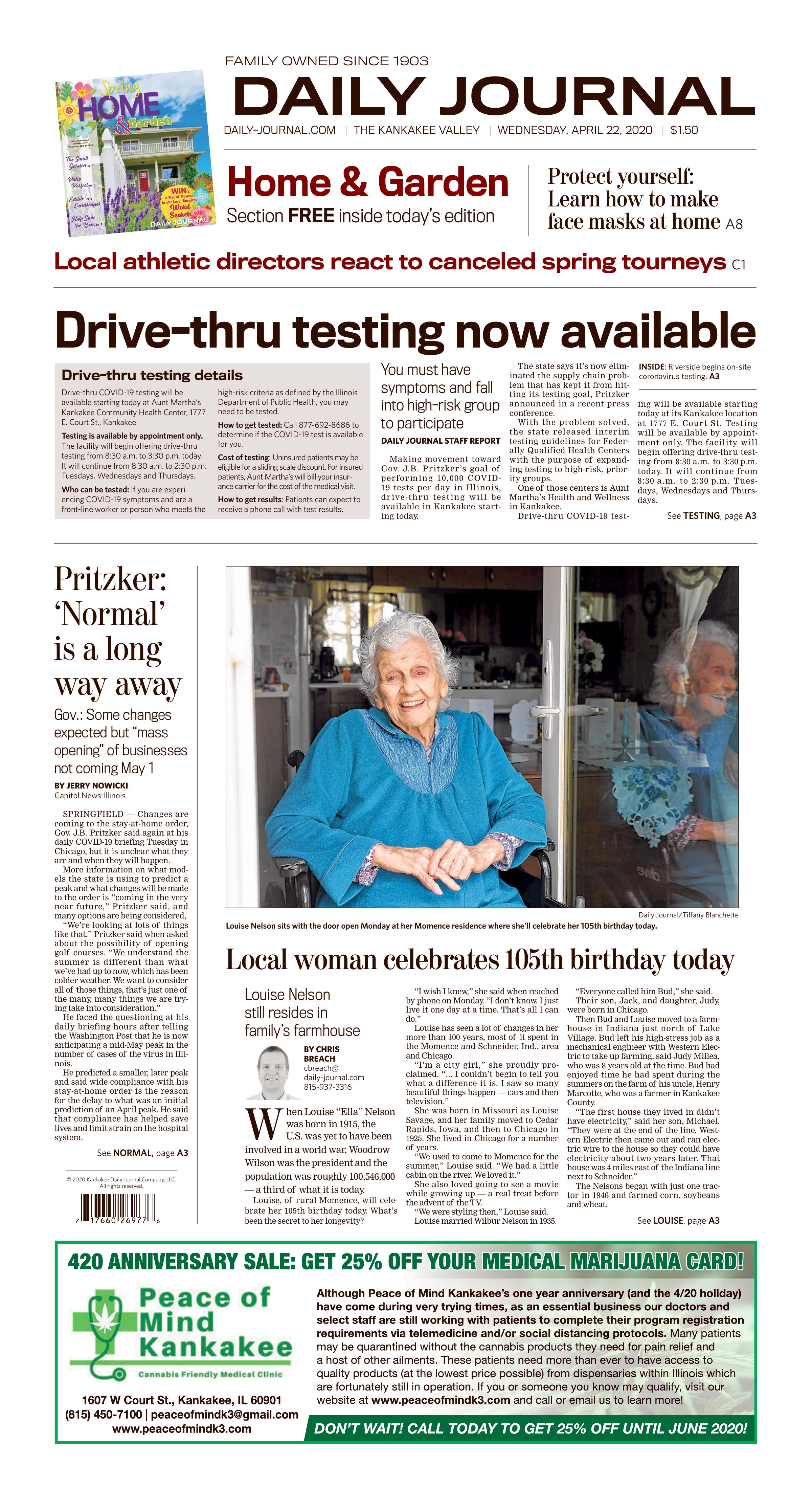