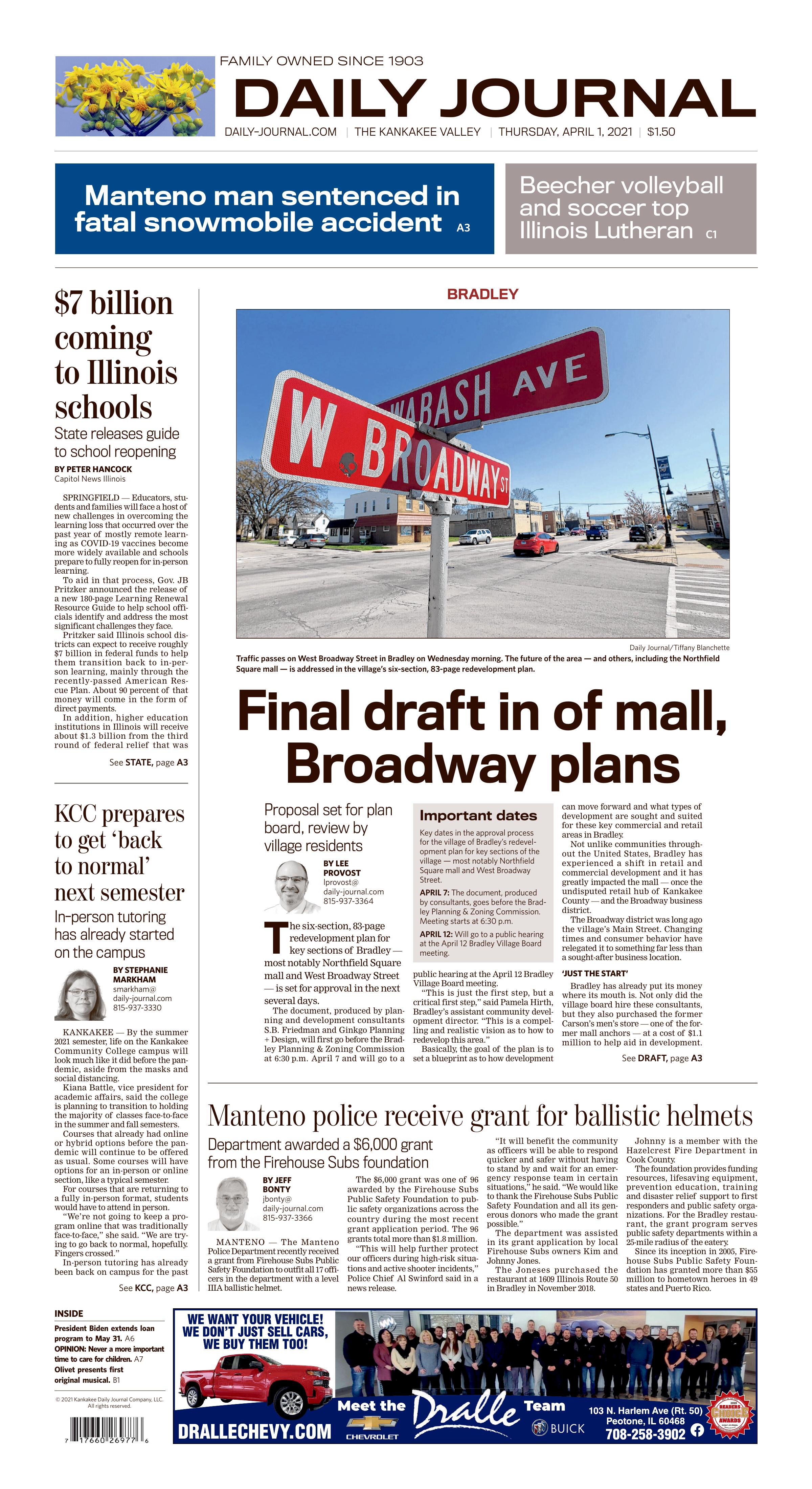 Traffic passes on West Broadway Street in Bradley on Wednesday morning. The future of the area — and others, including the Northfield Square mall — is addressed in the village’s six-section, 83-page redevelopment plan. READ MORE.

BRADLEY — The six-section, 83-page redevelopment plan for key sections of Bradley — most notably Northfield Square mall and West Broadway Street — is set for approval in the next several days.

The document, produced by planning and development consultants S.B. Friedman and Ginkgo Planning + Design, will first go before the Bradley Planning & Zoning Commission at 6:30 p.m. April 7 and will go to a public hearing at the April 12 Bradley Village Board meeting.

“This is just the first step, but a critical first step,” said Pamela Hirth, Bradley’s assistant community development director. “This is a compelling and realistic vision as to how to redevelop this area.”

Basically, the goal of the plan is to set a blueprint as to how development can move forward and what types of development are sought and suited for these key commercial and retail areas in Bradley.

Not unlike communities throughout the United States, Bradley has experienced a shift in retail and commercial development and it has greatly impacted the mall — once the undisputed retail hub of Kankakee County — and the Broadway business district.

The Broadway district was long ago the village’s Main Street. Changing times and consumer behavior have relegated it to something far less than a sought-after business location.

Bradley has already put its money where its mouth is. Not only did the village board hire these consultants, but they also purchased the former Carson’s men’s store — one of the former mall anchors — at a cost of $1.1 million to help aid in development. The village is currently working with a potential developer who is studying the location’s use as a conference center/banquet facility.

“It helps us to have a goal,” Hirth added, before noting these are strategies which will likely take many years to fully realize.

“We will put this before the public. We want the public to stay engaged.”

The plan’s two-prong focus is the approximate 53-acre Northfield property, which is basically in the heart of the village’s retail district along Illinois 50. The second focus is West Broadway, chiefly between Schuyler Avenue and Kennedy Drive.

The focus is to reinvigorate the mall by bringing new uses to the complex and eliminating portions of the actual mall, opening it up to community uses as well as well as potential living areas.

However, before any of those steps are taken, funding for such ambitious plans must be identified as they take shape.

Friedman and Ginkgo representatives said the village could consider an “economic development toolkit” which could include establishing Tax Increment Financing districts to help fund these projects for developers. The consultants also say the village should consider establishing business districts — which can establish inclusive taxing district. Those funds can then be used for development.

An example of such a taxing district would be downtown Kankakee’s business district which imposes a tax on itself to aid improvement for business owners.

Money and plenty of it will most certainly be needed. Bradley Mayor Pro Tem Mike Watson is well aware of that fact.

“This is an essential step. This commercial corridor has had 15 years of neglect. This area helps [the village] pay our bills, our employees. We have reinvest so this area stays viable,” he said.

Watson said he is looking far into the future with these plans.

“This is about future [village] boards being able to function financially,” he said. “We have to invest here. We are looking to upgrade our community.”

"This is a compelling and realistic vision as to how to redevelop this area."

Key dates for the approval process for the village of Bradley's redevelopment plan for key sections of the village — most notably Northfield Square mall and West Broadway Street.

• APRIL 12: Will go to a public hearing at the April 12 Bradley Village Board meeting.

MANTENO — The Manteno Police Department recently received a grant from Firehouse Subs Public Safety Foundation to outfit all 17 officers in the department with a level IIIA ballistic helmet.

The $6,000 grant was one of 96 awarded by the Firehouse Subs Public Safety Foundation to public safety organizations across the country during the most recent grant application period. The 96 grants total more than $1.8 million.

“This will help further protect our officers during high-risk situations and active shooter incidents,” Police Chief Al Swinford said in a news release.

“It will benefit the community as officers will be able to respond quicker and safer without having to stand by and wait for an emergency response team in certain situations,” he said. “We would like to thank the Firehouse Subs Public Safety Foundation and all its generous donors who made the grant possible.”

The department was assisted in its grant application by local Firehouse Subs owners Kim and Johnny Jones.

The Joneses purchased the restaurant at 1609 Illinois Route 50 in Bradley in November 2018.

Johnny is a member with the Hazelcrest Fire Department in Cook County.

Since its inception in 2005, Firehouse Subs Public Safety Foundation has granted more than $55 million to hometown heroes in 49 states and Puerto Rico.

Local
KCC prepares to get 'back to normal' next semester

KANKAKEE — By the summer 2021 semester, life on the Kankakee Community College campus will look much like it did before the pandemic, aside from the masks and social distancing.

Kiana Battle, vice president for academic affairs, said the college is planning to transition to holding the majority of classes face-to-face in the summer and fall semesters.

Courses that already had online or hybrid options before the pandemic will continue to be offered as usual. Some courses will have options for an in-person or online section, like a typical semester.

For courses that are returning to a fully in-person format, students would have to attend in person.

“We’re not going to keep a program online that was traditionally face-to-face,” she said. “We are trying to go back to normal, hopefully. Fingers crossed.”

In-person tutoring has already been back on campus for the past few weeks, in addition to online tutoring that’s also offered.

Current in-person tutoring hours are 8 a.m. to 3 p.m., with the plan being to return to regular hours by the fall semester.

In terms of COVID-19 precautions, the college plans to continue following the recommended CDC guidance for social distancing and mask wearing, in addition to increased cleaning efforts and requiring a daily assessment to be completed before entering a college facility. The assessment asks for verification that the visitor is not experiencing COVID-19 symptoms.

Battle said the desire from students to be on campus was the guiding factor in the decision to return to a pre-pandemic format.

“Students are expressing that they really miss being here and the face-to-face, social aspect of being on campus and being in front of their instructors and classmates,” she said.

This summer, six-week and eight-week options are available. Classes begin the week of May 24.

“We’re not going to keep a program online that was traditionally face-to-face. We are trying to go back to normal, hopefully. Fingers crossed.”