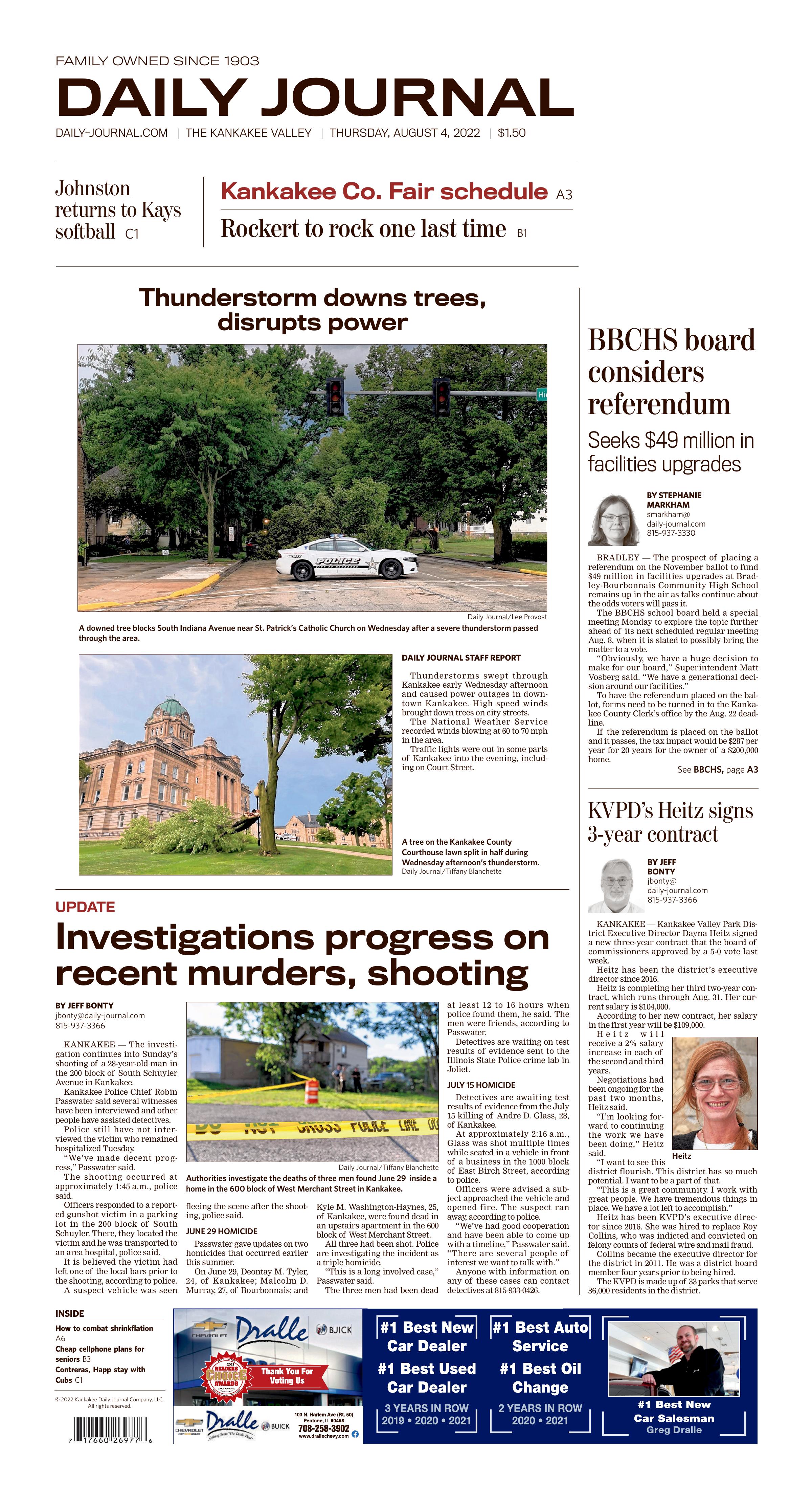 A tree blocks the road on South Chicago Avenue.

A tree on the Kankakee County Courthouse lawn split in half during Wednesday afternoon's thunderstorm.

A tree on the Kankakee County Courthouse lawn split in half during Wednesday afternoon's thunderstorm.

A tree covers a van along South Chicago Avenue near Eagle Street as another tree blocks the road in the background in the Riverview Historic District.

An uprooted tree on South Eighth Street near the Kankakee County Museum.

A woman walks her dogs across South Eighth Street Wednesday after thunderstorms tore trees down.

A tree snapped at its base lays on the grounds of the Kankakee County Museum.

A downed tree blocks South Indiana Avenue near St. Patrick's Catholic Church on Wednesday after a severe thunderstorm passed through the area.

A downed tree rests on a vehicle on West Vanmeter Street Wednesday afternoon following a severe thunderstorm that passed through the area. Several other trees were blocking roadways throughout the city of Kankakee.

The National Weather Service recorded winds blowing at 60 to 70 mph in the area.

Traffic lights were out in some parts of Kankakee into the evening, including on Court Street.

As of Thursday morning, all critical facilities had power restored, but approximately 200 customers in Kankakee were still without power, according to the City of Kankakee Facebook page.

The 5th ward and Rosewood Avenue/Greenwood Avenue area continue to be the most impacted by outages, the city's post said. Power is expected to be restored by this afternoon.

A peak of over 3,250 customers were without power yesterday, according to the city's post.

No injuries have been reported to the city.

The Department of Public Works team has been conducting cleanup and removal since 6 a.m. today, starting with trees and debris blocking roadways. Alleys will be cleaned once street cleanup is complete, the city's post said.
Cleanup is expected to continue into next week, according to the city.
Local
BBCHS board talks possibilities for facilities referendum
Submitted photo

A rendering shows a possible new exterior entry of BBCHS.

BRADLEY — The prospect of placing a referendum on the November ballot to fund $49 million in facilities upgrades at Bradley-Bourbonnais Community High School remains up in the air as talks continue about the odds voters will pass it.

The BBCHS school board held a special meeting Monday to explore the topic further ahead of its next scheduled regular meeting Aug. 8, when it is slated to possibly bring the matter to a vote.

“Obviously, we have a huge decision to make for our board,” Superintendent Matt Vosberg said. “We have a generational decision around our facilities.”

To have the referendum placed on the ballot, forms need to be turned in to the Kankakee County Clerk’s office by the Aug. 22 deadline.

Board President Justin Caldwell noted that if the vote is not unanimous, the public perception will be that the board doesn’t fully back the referendum or agree that the funding is needed.

“If the vote doesn’t go unanimous one way or another, it’s going to be a struggle either way,” he said.

Vosberg agreed that a unanimous vote would be ideal.

“From what I’ve been told, if we don’t have unanimous board support, then that doesn’t send a positive message to the community that this is what we need to do,” Vosberg said.

Board members agreed on the need for the facilities upgrades but expressed doubt around the timing of placing a referendum on the ballot this November.

The board discussed the recent community survey which indicated a slim majority [52%] of voters were in favor of the referendum and noted concerns over whether the 150-person sample size would translate to success at the polls.

The goal was to survey at least 250 people.

“Support was at 52%, which is very tight,” Vosberg said. “We have a small margin of error. If we were to run a campaign, it would have to be a really, really strong campaign.”

District employees and board members are limited to what they can say in terms of promoting the referendum, Vosberg noted.

“Really, we can talk about the facility needs,” he said. “But advocating the referendum, especially using school resources, is in violation of election laws.”

Vosberg said he could present information about the school’s facility needs to parent groups throughout the fall, particularly at the feeder districts.

“I don’t know how many elementary parents know that 400 kids leave the building every hour to go to portable classrooms that are 15 years old,” he said. “I know that St. George [Elementary] just passed a referendum a couple years ago based on getting rid of their portables, and they were able to do that this school year.”

In addition to those presentations, a community-led effort to spread the word would also be needed, he said.

Vosberg said that, although community forums were sparsely attended, a few of the people who went indicated they would be on board with helping in this way.

“The board potentially could vote on this next Monday, and Chris [Hammond, chief school business official] and I would start on the 9th identifying people in the community,” he said.

Vosberg said he would research what kind of timeline is needed to mobilize such an effort and bring information back to the board before its Aug. 8 meeting.

The possibility of waiting for a later election was brought up as well.

It was noted that factors like rising inflation and the village of Bourbonnais asking for a 1% sales tax increase on the same ballot may drive more people to the polls who would not normally vote.

However, waiting to get a referendum passed would also mean further delaying addressing facilities needs which are already pressing.

Caldwell said he is concerned with whether the district has the resources or the time to carry out its campaign by November.

He also questions if the timing is right in general, he said.

“When we started this discussion back in December, gas prices weren’t $5 a gallon,” he said. “Your eggs didn’t double in price and everything like that… So is this the right time?”

The consultants that conducted the survey suggested that if the referendum is skipped this November, the next best chance of it passing would be November 2024.

The reason is that 18- to 44- year-olds were the biggest group supporting the referendum in the survey, and this demographic turns out in smaller numbers for primary elections.

“I don’t know if I agree with that [timing] or not,” Caldwell added. “We have to take that under consideration, but it’s a long time for needs that we have in this building now.”

The board also brought up the 119-acre farm land that the district purchased years ago with the intention of building a new campus.

The land is currently being leased, as former referendums failed to secure the funding to construct a new building there.

The district is considering using the land for solar panels, Vosberg said, though proposals from solar companies have not been formally requested.

Constructing a new building on the land is projected to cost $160 million.

“The consultant did ask voters [in the survey], and only 16% thought we should build a new school out there,” Vosberg noted. “That’s pretty clear that’s not viable any time soon.”

Caldwell said the possibilities for selling the property or finding another use for it should be fully explored.

“Yes, that property has gone down in value, but at what point are we going to continue to hold onto it, or sell it to move on?” Caldwell asked. “We’re not going to build on it, but we are getting crop rent for it. It’s not doing us any good… That land is a liability for us.”

Board member Ann Brezinski agreed that the “loose end” of what to do with the farm property needs to be resolved.

“It’s sitting there. It’s not doing anything,” she said. “I think we need to address how that’s going to be handled and perhaps get that solved before we move to a referendum. I have no doubt there’s a need. I support that fully. I am just concerned about this November.”

At the conclusion of the special meeting held Monday, the board had not yet decided whether or not a vote on the matter of the referendum would be held then.

Heitz has been the district’s executive director since 2016.

Heitz is completing her third two-year contract, which runs through Aug. 31. Her current salary is $104,000.

According to her new contract, her salary in the first year will be $109,000.

Heitz will receive a 2% salary increase in each of the second and third years.

Negotiations had been ongoing for the past two months, Heitz said.

“I’m looking forward to continuing the work we have been doing,” Heitz said.

“This is a great community. I work with great people. We have tremendous things in place. We have a lot left to accomplish.”

Heitz has been KVPD’s executive director since 2016. She was hired to replace Roy Collins, who was indicted and convicted on felony counts of federal wire and mail fraud.

Collins became the executive director for the district in 2011. He was a district board member four years prior to being hired.