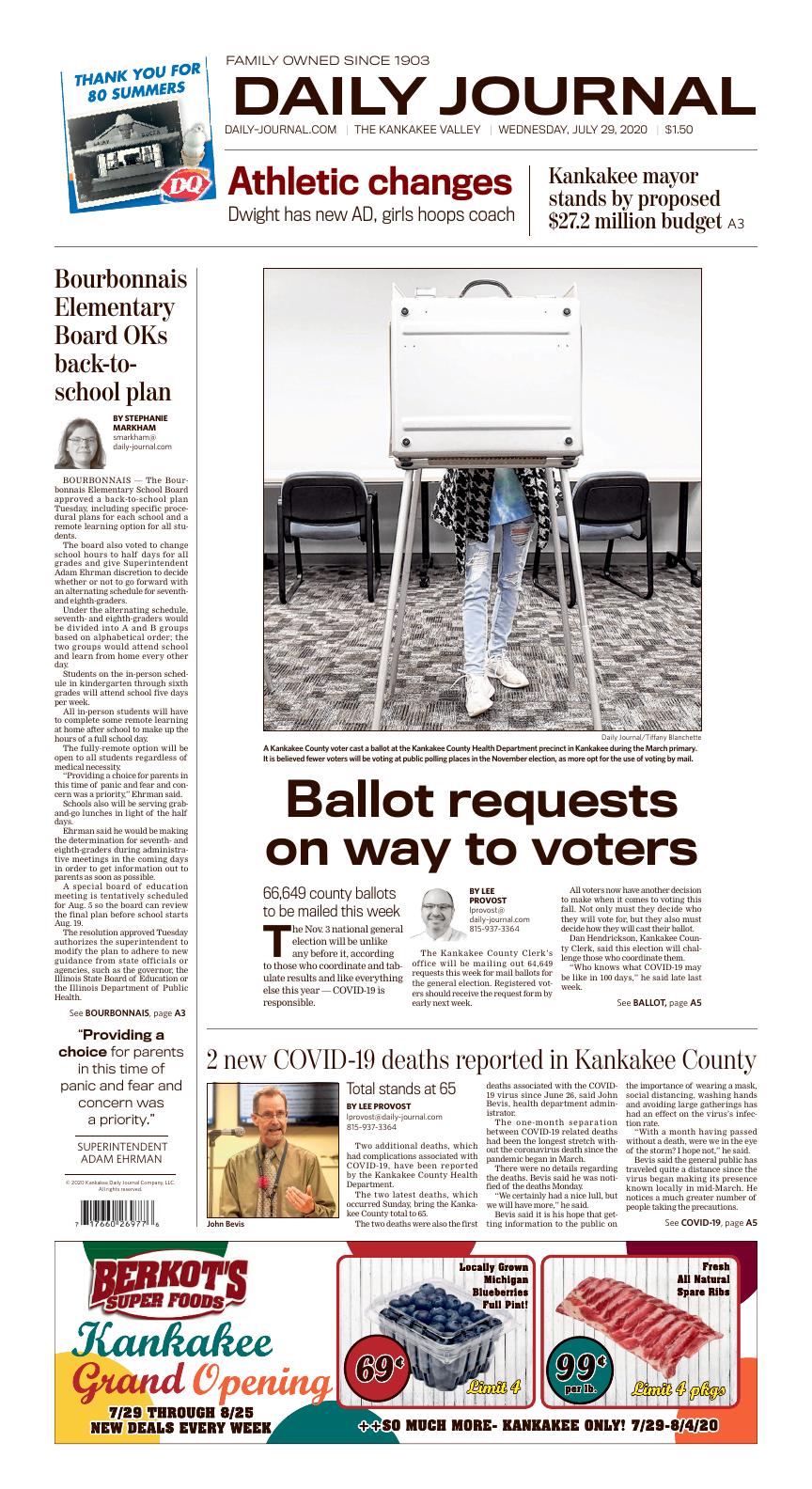 A Kankakee County voter cast a ballot at the Kankakee County Health Department precinct in Kankakee during the March primary. It is believed fewer voters will be voting at public polling places in the November election, as more opt for the use of voting by mail.

A Kankakee County voter cast a ballot at the Kankakee County Health Department precinct in Kankakee during the March primary. It is believed fewer voters will be voting at public polling places in the November election, as more opt for the use of voting by mail.

KANKAKEE — The Nov. 3 national general election will be unlike any before it, according to those who coordinate and tabulate results and like everything else this year — COVID-19 is responsible.

The Kankakee County Clerk’s office will be mailing out 64,649 requests this week for mail ballots for the general election. Registered voters should receive the request form by early next week.

All voters now have another decision to make when it comes to voting this fall. Not only must they decide who they will vote for, but they also must decide how they will cast their ballot.

Dan Hendrickson, Kankakee County Clerk, said this election will challenge those who coordinate them.

“We don’t know what this election may look like.”

So, that leads to the at-home voting option, where ballots will be returned by mail. In addition to the request form, voters will only be required to provide their own postage.

Regarding the possibility of voter fraud, meaning someone other than the person who requested the ballot actually filling out the ballot, Fancher said there is no way of policing that behavior, and she doesn’t believe that will be an issue.

“I don’t buy into the whole widespread voter fraud thing,” she said.

Basically, she said, people will be on a honor system.

“It’s obviously OK for someone to get help, but as long as the (at-home) ballot is signed, there is no way of knowing if someone helped or influenced the voter,” she said.

According to a University of Virginia study, of the 332 million U.S. residents, 235 million are of voting age and are U.S. citizens, meaning 70 percent of the overall population will be eligible to vote in 2020.

The Democratic voter-targeting firm Catalist projects that some 156 million people could cast ballots in 2020, a significant increase from the 139 million total of 2016.

While it may seem impossible, early voting is now less than two months away. Early voting begins on Sept. 24 and concludes on Nov. 2, the day before the general election polling places open.

“We want people to participate, but we want them to be safe,” said Hendrickson, regarding the health concerns. “People do not have to vote by mail, but it is the safest way.”

The clerk said that Oct. 29 will be the deadline for the return of the postcards seeking a mailed ballot. Registered voters who plan to vote in person can simply dispose of the mailed postcard seeking the at-home ballot.

Hendrickson said that in 2016, about 5 percent of the county’s voting public used the at-home ballot. Iroquois was in that same range.

Mailed ballots must be postmarked by Nov. 3 to be counted. With that in mind, Hendrickson said it may be impossible to declare a winner on Election Night in a tight race.

He said he hopes voters return completed at-home ballots as soon as possible, so they can be imputed into the system.

Two additional deaths, which had complications associated with COVID-19, have been reported by the Kankakee County Health Department.

The two latest deaths, which occurred Sunday, bring the Kankakee County total to 65.

The one-month separation between COVID-19 related deaths had been the longest stretch without the coronavirus death since the pandemic began in March.

There were no details regarding the deaths. Bevis said he was notified of the deaths Monday.

“We certainly had a nice lull, but we will have more,” he said.

Bevis said it is his hope that getting information to the public on the importance of wearing a mask, social distancing, washing hands and avoiding large gatherings has had an effect on the virus’s infection rate.

“With a month having passed without a death, were we in the eye of the storm? I hope not,” he said.

Bevis said the general public has traveled quite a distance since the virus began making its presence known locally in mid-March. He notices a much greater number of people taking the precautions.

He is also aware of people experiencing illnesses staying at home.

“The risks of transmission have been greatly reduced,” he said.

Bevis, however, said there still is a long road to be traveled, as there is no vaccine for the virus, so the public must keep up its vigilance.

According to the health department, Kankakee County has 426 active infection cases, but there have been 1,190 recoveries from the illness.

Statewide, there have been 7,416 deaths, as well as 172,655 confirmed cases, according to the Illinois Department of Public Health.

Editor's Note: This story has been updated to reflect the correct tentative date of the next school board meeting.

BOURBONNAIS — The Bourbonnais Elementary School Board approved a back-to-school plan Tuesday, including specific procedural plans for each school and a remote learning option for all students.

The board also voted to change school hours to half days for all grades and give Superintendent Adam Ehrman discretion to decide whether or not to go forward with an alternating schedule for seventh- and eighth-graders.

Under the alternating schedule, seventh- and eighth-graders would be divided into A and B groups based on alphabetical order; the two groups would attend school and learn from home every other day.

Students on the in-person schedule in kindergarten through sixth grades will attend school five days per week.

All in-person students will have to complete some remote learning at home after school to make up the hours of a full school day.

The fully-remote option will be open to all students regardless of medical necessity.

“Providing a choice for parents in this time of panic and fear and concern was a priority,” Ehrman said.

Schools also will be serving grab-and-go lunches in light of the half days.

Ehrman said he would be making the determination for seventh- and eighth-graders during administrative meetings in the coming days in order to get information out to parents as soon as possible.

A special board of education meeting is tentatively scheduled for Aug. 12 at 7 p.m. so the board can review the final plan before school starts Aug. 19.

The resolution approved Tuesday authorizes the superintendent to modify the plan to adhere to new guidance from state officials or agencies, such as the governor, the Illinois State Board of Education or the Illinois Department of Public Health.

Ehrman stressed that the plan is fluid due to constantly changing information surrounding COVID-19, and the district is prepared to implement fully-remote learning again if required.

“There is no right answer here,” he said. “School districts across the state are slicing this apple in many different ways.”

Other details of the plan include that students at all schools will be required to wear face masks in buildings and go directly to class when they arrive at school. Homeroom teachers will take students’ temperatures, and parents will be asked to certify that any student sent to school is symptom free.

Students’ desks will all face the same direction in classrooms, with no desks facing each other or placed in groups. School offices will keep updated copies of classroom seating charts.

Bourbonnais Education Association President Lauren Lundmark addressed the board Tuesday and shared results of a teacher survey regarding returning to school.

According to the survey, 82 percent of teachers want to return to school in some fashion, but 67 percent would prefer a blended model.

“Teachers are not feeling the normal back-to-school excitement we normally feel,” Lundmark said. “Some are scared.”

Among teacher concerns were maintaining social distancing with the number of students in each classroom, having adequate PPE and having adequate time for cleaning and disinfecting classrooms, Lundmark said.

Teachers also expressed concern for the quality of learning that would take place in an environment where students’ desks have to face one direction and group collaboration is limited. 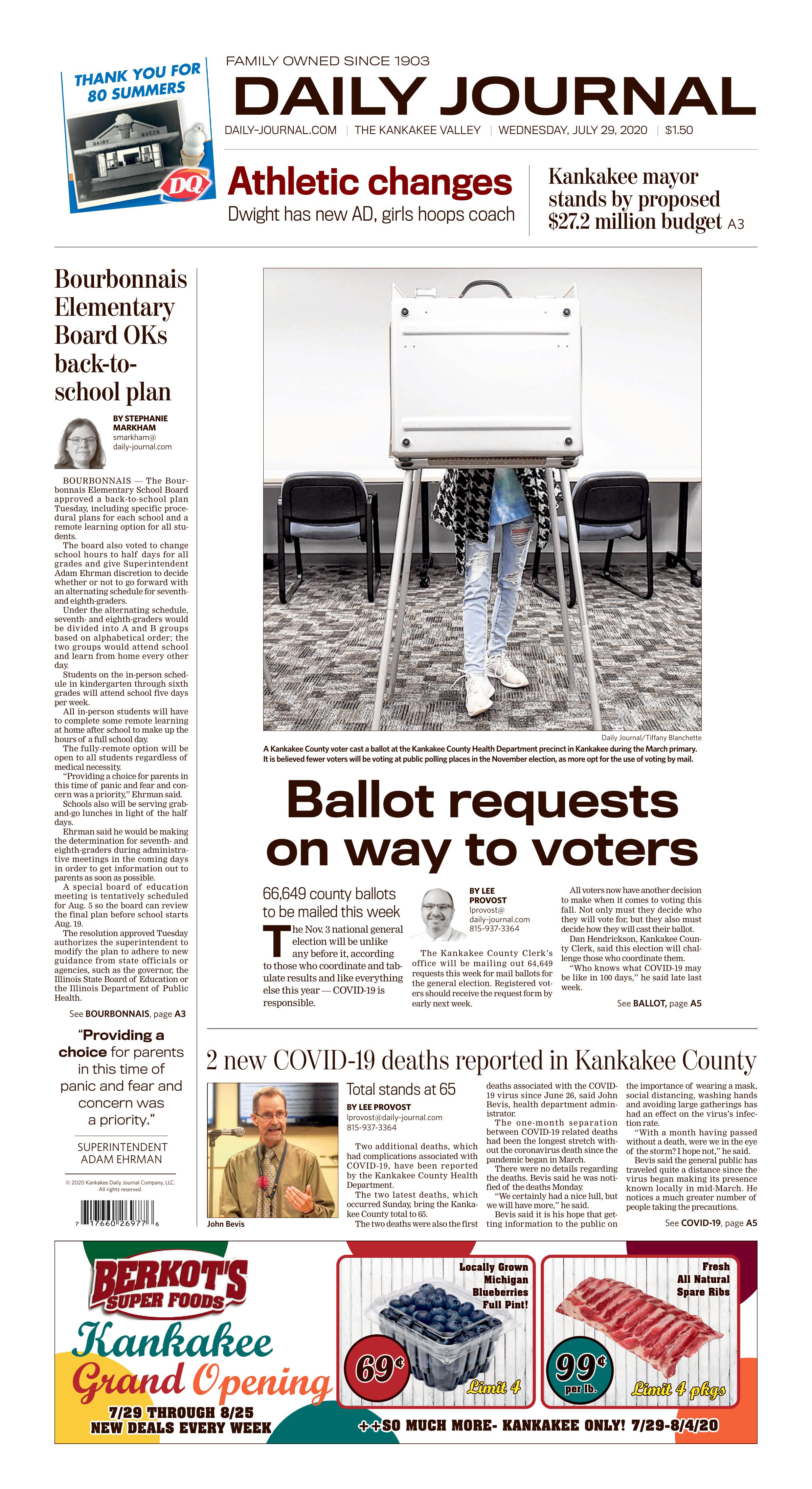