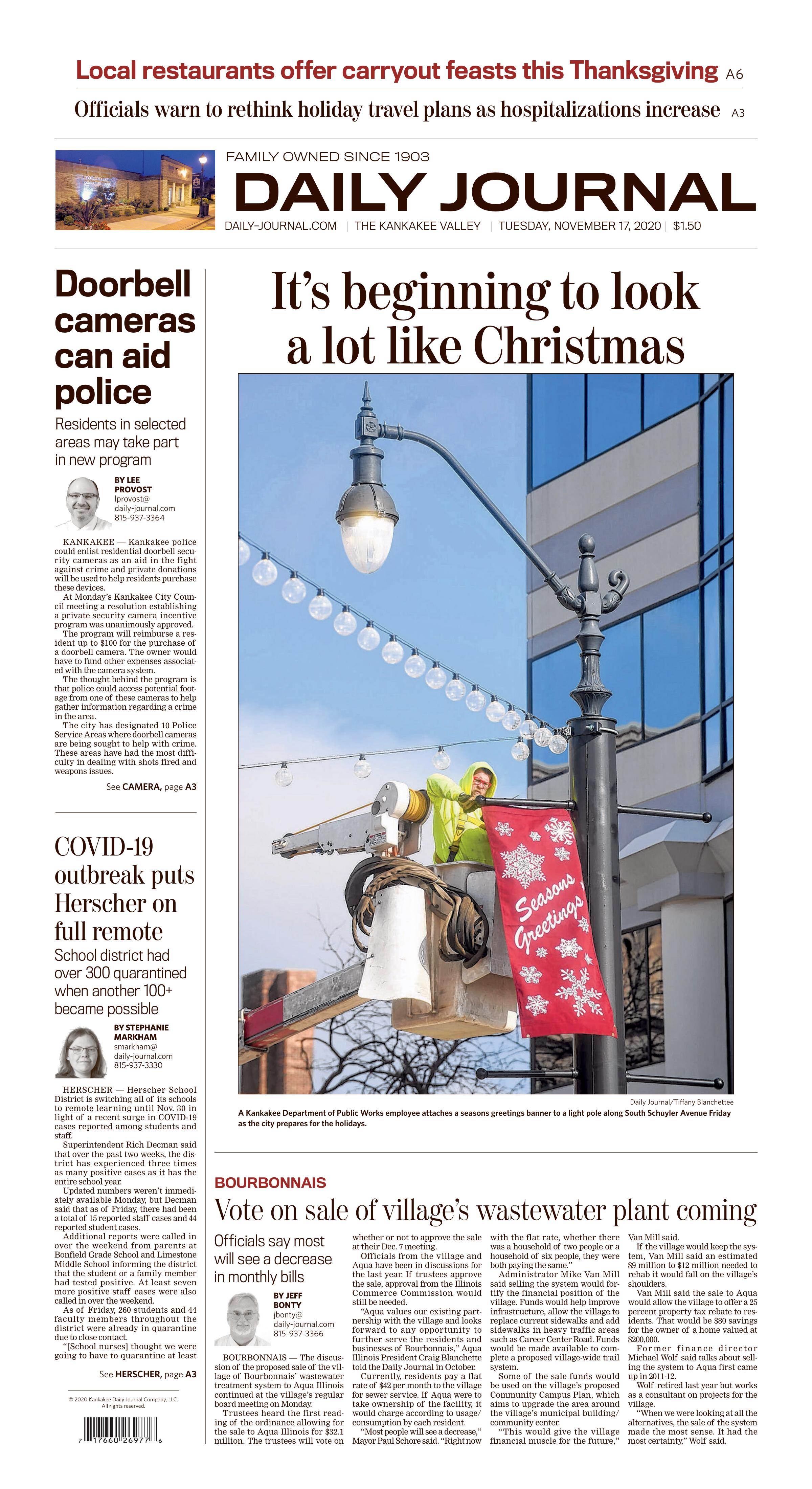 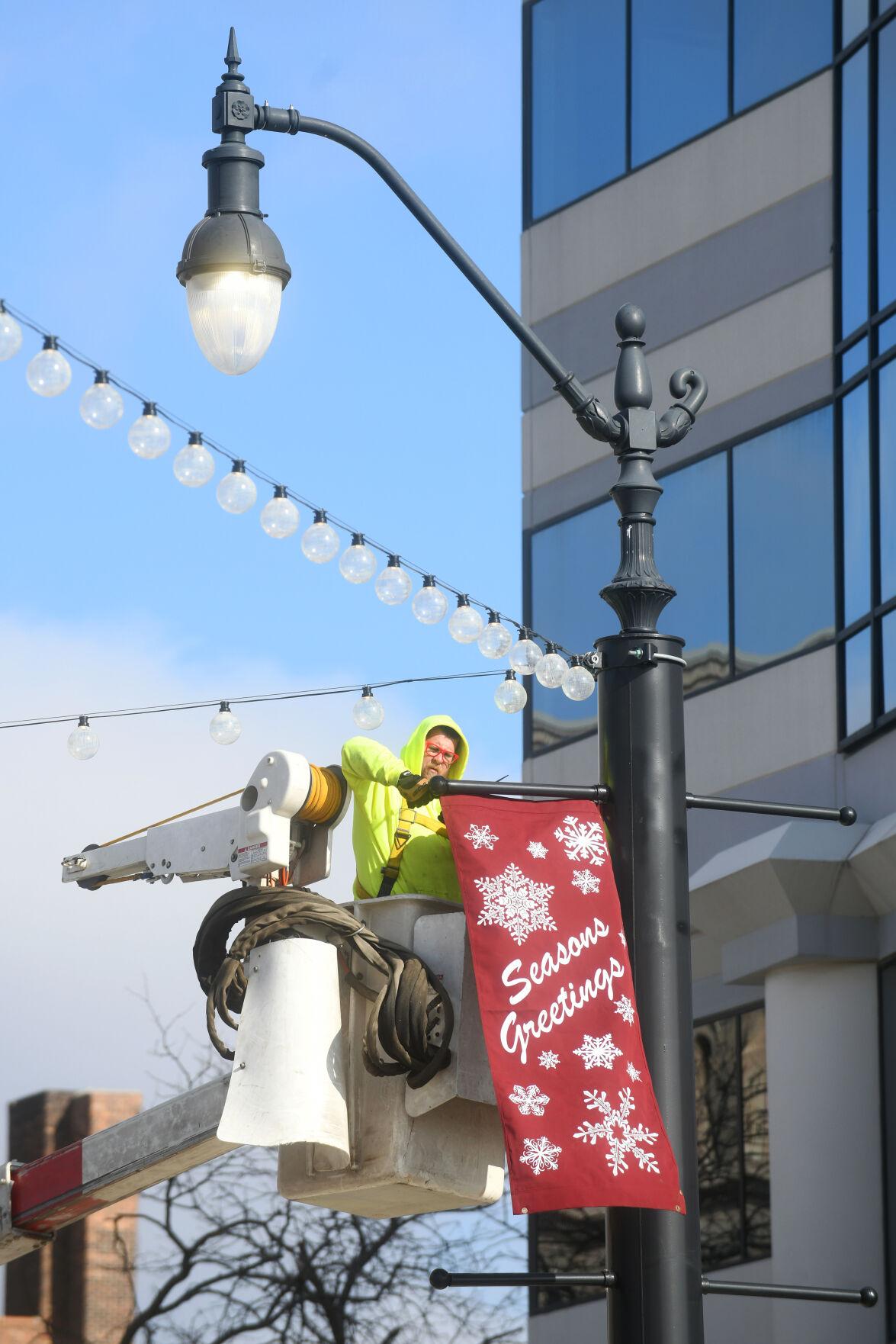 A Kankakee Department of Public Works employee attaches a seasons greetings banner to a light pole along South Schuyler Avenue Friday as the city prepares for the holidays.

BOURBONNAIS — The discussion of the proposed sale of the village of Bourbonnais’ wastewater treatment system to Aqua Illinois continued at the village’s regular board meeting on Monday.

Trustees heard the first reading of the ordinance allowing for the sale to Aqua Illinois for $32.1 million. The trustees will vote on whether or not to approve the sale at their Dec. 7 meeting.

Officials from the village and Aqua have been in discussions for the last year. If trustees approve the sale, approval from the Illinois Commerce Commission would still be needed.

“Aqua values our existing partnership with the village and looks forward to any opportunity to further serve the residents and businesses of Bourbonnais,” Aqua Illinois President Craig Blanchette told the Daily Journal in October.

Currently, residents pay a flat rate of $42 per month to the village for sewer service. If Aqua were to take ownership of the facility, it would charge according to usage/consumption by each resident.

“Most people will see a decrease,” Mayor Paul Schore said. “Right now with the flat rate, whether there was a household of two people or a household of six people, they were both paying the same.”

Administrator Mike Van Mill said selling the system would fortify the financial position of the village. Funds would help improve infrastructure, allow the village to replace current sidewalks and add sidewalks in heavy traffic areas such as Career Center Road. Funds would be made available to complete a proposed village-wide trail system.

Some of the sale funds would be used on the village’s proposed Community Campus Plan, which aims to upgrade the area around the village’s municipal building/community center.

“This would give the village financial muscle for the future,” Van Mill said.

If the village would keep the system, Van Mill said an estimated $9 million to $12 million needed to rehab it would fall on the village’s shoulders.

Van Mill said the sale to Aqua would allow the village to offer a 25 percent property tax rebate to residents. That would be $80 savings for the owner of a home valued at $200,000.

Wolf retired last year but works as a consultant on projects for the village.

“When we were looking at all the alternatives, the sale of the system made the most sense. It had the most certainty,” Wolf said.

KANKAKEE — Kankakee police could enlist residential doorbell security cameras as an aid in the fight against crime and private donations will be used to help residents purchase these devices.

The program will reimburse a resident up to $100 for the purchase of a doorbell camera. The owner would have to fund other expenses associated with the camera system.

The thought behind the program is that police could access potential footage from one of these cameras to help gather information regarding a crime in the area.

The city has designated 10 Police Service Areas where doorbell cameras are being sought to help with crime. These areas have had the most difficulty in dealing with shots fired and weapons issues.

To access any potential information on a device, the property owner must grant permission to the police department.

Barbi Brewer-Watson, executive director of the city’s Economic & Community Development Agency, said $5,000 has already been donated by businesses and individuals to fund camera purchases. She is hopeful another $5,000 can be brought in.

“These cameras can be the first line of public safety,” she said.

She noted so often residents in these targeted blocks don’t feel they have any way of protecting themselves.

“This is about providing for comfort and control,” Brewer-Watson said after the council meeting. “These are areas where residents may not feel like they have any control.”

This doorbell camera rebate program can bring some sense of assurance to these areas, she said. Communities such as Elgin and Carol Stream have operated this type of program.

Application forms are available on the city’s website at citykankakee-il.gov. Funding will not be available until Nov. 23. People who have purchased a doorbell camera system since July 1, can also be reimbursed if they become part of the program.

The city has designated these 10 Police Service Areas where doorbell cameras are being sought to help with crime. These areas have had the most difficulty in dealing with shots fired and weapons issues.

HERSCHER — Herscher School District is switching all of its schools to remote learning until Nov. 30 in light of a recent surge in COVID-19 cases reported among students and staff.

Superintendent Rich Decman said that over the past two weeks, the district has experienced three times as many positive cases as it has the entire school year.

Updated numbers weren’t immediately available Monday, but Decman said that as of Friday, there had been a total of 15 reported staff cases and 44 reported student cases.

As of Friday, 260 students and 44 faculty members throughout the district were already in quarantine due to close contact.

“[School nurses] thought we were going to have to quarantine at least another 50 to 100 kids as well as additional staff members,” Decman said. “We were close to a breaking point already, so that was kind of the straw that broke the camel’s back.”

Herscher High School students returned to classrooms about a week ago after a two-week remote shift in response to multiple connected cases within the school, which the Kankakee County Health Department deemed an outbreak.

Decman said he hoped the spread of the virus would stabilize after the high school students’ return, but clearly that hasn’t been the case.

“It’s very possible that [remote learning] will be extended, but we are going to see what happens in a week or so,” he said. “Right now we don’t have anybody quarantined beyond Nov 30; however, that obviously can change every single day.”

The district will be performing deep cleanings of each building during the remote shift as a precaution, Decman said.

While in-person school is held, buildings are being cleaned multiple times daily, in addition to the enforcement of social distancing, wearing face masks and hand washing.

Despite all the precautions, the virus is still finding its way into school systems.

“We firmly believe that most of this is being brought in from outside,” Decman said. “We just can’t control it. We don’t think it’s spreading in school.”

Decman said contact tracing shows most cases are originating from social gatherings or from family members in the same household.

The Herscher School Board approved a plan in October to increase in-person instructional hours from half days to full six-hour school days starting Jan. 5.

Decman said this is still the district’s goal, but its implementation will depend on COVID-19 numbers in the schools and community.

“Who knows if we’ll even be in person then?” he said. “Based upon the numbers we have now, it wouldn’t shock me if we were still in remote learning at that time.”

Manteno CUSD 5 has announced a transition to remote learning for the entire district to limit the spread of coronavirus after the Thanksgiving holiday, according to a district Facebook post.

The district previously announced plans for only its high school to temporarily go remote due to staffing concerns brought on by the virus. The high school was previously set to resume in-person learning Nov. 30.

According to the district’s website, there are 27 positive COVID-19 cases in the district as of Nov. 13, up from 17 cases reported from Nov. 9.