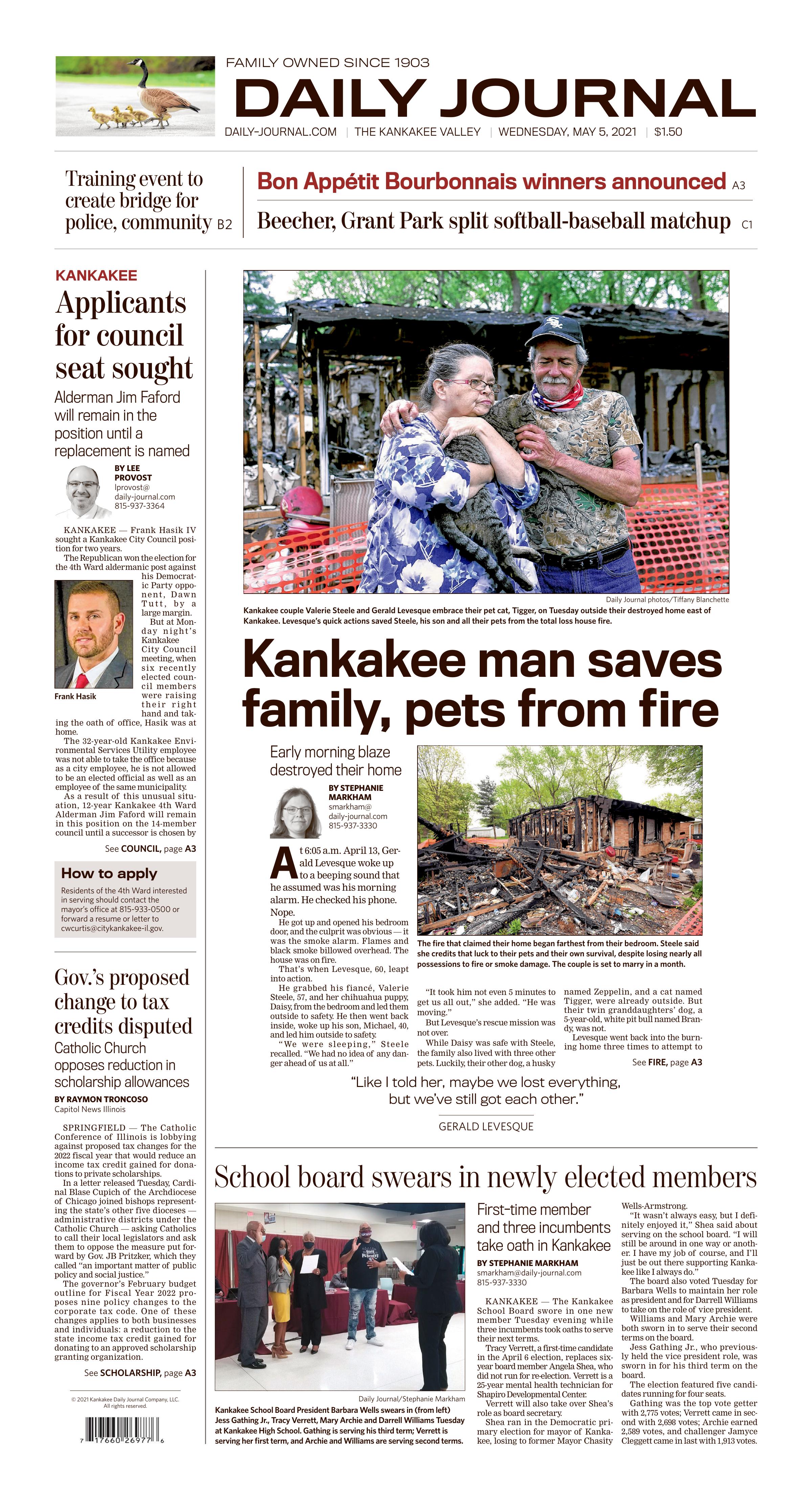 Kankakee couple Valerie Steele and Gerald Levesque embrace their pet cat, Tigger, on Tuesday outside their destroyed home east of Kankakee. Levesque’s quick actions saved Steele, his son and all their pets from the total loss house fire.

Kankakee couple Valerie Steele and Gerald Levesque stand outside their recently burned home east of Kankakee. Levesque’s quick actions saved Steele, his son and all their pets from the total loss house fire.

The fire that claimed the home of Kankakee couple Gerald Levesque and Valerie Steele east of Kankakee began farthest from their bedroom. Steele said she credits that luck to their pets and their own survival, despite losing nearly all possessions to fire or smoke damage.

Gerald Levesque checks the condition of a chest that belonged to his mother outside his fire damaged home east of Kankakee. Levesque's quick actions saved his fiancé, Valerie Steele, his son and all their pets from the total loss house fire. READ MORE.

Gerald Levesque wipes his hands after rummaging through some rooms in his fire damaged home east of Kankakee. Levesque’s quick actions saved his fiancé, Valerie Steele, his son and all their pets from the total loss house fire.

KANKAKEE — At 6:05 a.m. April 13, Gerald Levesque woke up to a beeping sound that he assumed was his morning alarm. He checked his phone. Nope.

He got up and opened his bedroom door, and the culprit was obvious — it was the smoke alarm. Flames and black smoke billowed overhead. The house was on fire.

That’s when Levesque, 60, leapt into action.

“We were sleeping,” Steele recalled. “We had no idea of any danger ahead of us at all.”

But Levesque’s rescue mission was not over.

While Daisy was safe with Steele, the family also lived with three other pets. Luckily, their other dog, a husky named Zeppelin, and a cat named Tigger, were already outside. But their twin granddaughters’ dog, a 5-year-old, white pit bull named Brandy, was not.

Levesque went back into the burning home three times to attempt to rescue Brandy, who was hiding under the bed. She was too terrified to come out despite his attempts.

A garbage man driving by the home had called the fire department, and Steele quickly got on the phone with 911 as well. They counted at least 13 fire trucks had arrived on their block east of Kankakee to fight the fire.

“Within about 8 minutes of us being out of the house, the whole thing was just totally engulfed,” Steele said. “The smoke, it went pretty deep. If we had slept another 10 minutes, I don’t think we’d be here.”

After about 45 minutes went by, they assumed the worst for Brandy.

Suddenly, a firefighter called out that he saw a dog in the bedroom window.

Levesque ran back to the house — falling in a ditch on the way but getting back up — and reached through the bedroom window to grab Brandy, pulling her outside to safety. Though he singed the top of his head in the process, he has no regrets.

“[The dog] was just so happy, oh my Lord,” he recalled. “My granddaughters call me a hero. It was a rescue dog when they got her; now it’s kind of twice over [being rescued]. I just can’t believe it.”

Neighbors have helped out by providing food and shelter for Tigger, an indoor/outdoor cat that was used to roaming the neighborhood. Steele noted she was grateful Tigger was not inside at the time of the fire, as she likes to hide in closets.

Come September, Levesque and Steele will have been together for three years. They have plans to get married in one month. Levesque is a retired painter and Steele is retired from Shapiro Developmental Center.

The cause of the fire is unknown; fire officials told the family it might have been an electrical issue, but they could not determine the point origin with certainty because of the extent of the damage.

“Everyone who’s seen the house said they don’t know how we got out alive,” Levesque said. “It’s unreal.”

The couple has been told they will have to demolish the house before insurance coverage comes through, but they are unsure how they will pay for it upfront.

They had just paid the house off two months ago. On top of the loss of their home, they also lost nearly all of their belongings in the fire.

“I didn’t want to grab nothing but who I loved and get them out of there,” Levesque said. “That’s all I cared for right there in that second.”

Levesque said this was his first time ever being in a house fire, and he’s had to see his doctor due to nightmares and trouble sleeping since the incident.

“I never want to go through that ever again,” he said.

Despite the hardship, Levesque said he has no intention of postponing their wedding plans.

“This is not gonna stop me,” he said. “We are still getting married.”

He was happy to have been able to recover one particular item undamaged from the debris — his fiancé’s wedding band.

“Like I told her, maybe we lost everything, but we’ve still got each other.”

“Like I told her, maybe we lost everything, but we’ve still got each other.”

A Go Fund Me page has been set up for Levesque and Steele at gofundme.com/f/valerie-and-jr-house-fire?utm_campaign=p_cp+share-sheet&utm_medium=copy_link_all&utm_source=customer.

KANKAKEE — The Kankakee School Board swore in one new member Tuesday evening while three incumbents took oaths to serve their next terms.

Tracy Verrett, a first-time candidate in the April 6 election, replaces six-year board member Angela Shea, who did not run for re-election. Verrett is a 25-year mental health technician for Shapiro Developmental Center.

Verrett will also take over Shea’s role as board secretary.

“It wasn’t always easy, but I definitely enjoyed it,” Shea said about serving on the school board. “I will still be around in one way or another. I have my job of course, and I’ll just be out there supporting Kankakee like I always do.”

The board also voted Tuesday for Barbara Wells to maintain her role as president and for Darrell Williams to take on the role of vice president.

Williams and Mary Archie were both sworn in to serve their second terms on the board.

Jess Gathing Jr., who previously held the vice president role, was sworn in for his third term on the board.

Gathing was the top vote getter with 2,775 votes; Verrett came in second with 2,698 votes; Archie earned 2,589 votes, and challenger Jamyce Cleggett came in last with 1,913 votes.

Kankakee School Board race ends in victory for 3 incumbents, 1 newcomer

The race to claim four seats on the Kankakee School Board culminated with the three incumbents on the ballot retaining their spots.

The Republican won the election for the 4th Ward aldermanic post against his Democratic Party opponent, Dawn Tutt, by a large margin.

But at Monday night’s Kankakee City Council meeting, when six recently elected council members were raising their right hand and taking the oath of office, Hasik was at home.

The 32-year-old Kankakee Environmental Services Utility employee was not able to take the office because as a city employee, he is not allowed to be an elected official as well as an employee of the same municipality.

As a result of this unusual situation, 12-year Kankakee 4th Ward Alderman Jim Faford will remain in this position on the 14-member council until a successor is chosen by Mayor Chris Curtis.

The mayor will have 30 days to fill the post once it has been declared vacant. Curtis said Tuesday he could have a candidate selected as early as the May 17 council meeting.

On Tuesday afternoon, Hasik told the Journal he has not submitted a letter stating he is vacating his position to Mayor Curtis.

Following the swearing-in ceremony at Monday’s meeting, Mary Ryan Norwell, the city’s in-house counsel, stated because Hasik failed to take the oath of office, the question becomes: What happens to the position of 4th Ward alderman?

“Illinois law clearly states that the alderman who has held the office for the term of four years hold that office until his successor is elected and qualified [sworn in],” she said.

By not taking the oath, Hasik, in effect, “has not qualified for the office of alderman,” she said.

She added, “The law also states that the current alderman is not only entitled, but is also obligated to exercise the functions and duties of the office until the successor is lawfully chosen and qualified.”

That statement means Faford will stay in his current office until a successor is put into place. The other 4th Ward council member is Danita Grant-Swanson.

Norwell cited two sections of the Illinois Compiled Statues backing up her opinion. She also cited an Illinois appellate case regarding her direction to keep Faford in place on a tentative basis.

Those interested in serving should contact the mayor’s office at 815-933-0500 or forward a resume or letter to cwcurtis@citykankakee-il.gov.

Residents of the 4th Ward interested in serving should contact the mayor's office at 815-933-0500 or forward a resume or letter to cwcurtis@citykankakee-il.gov.