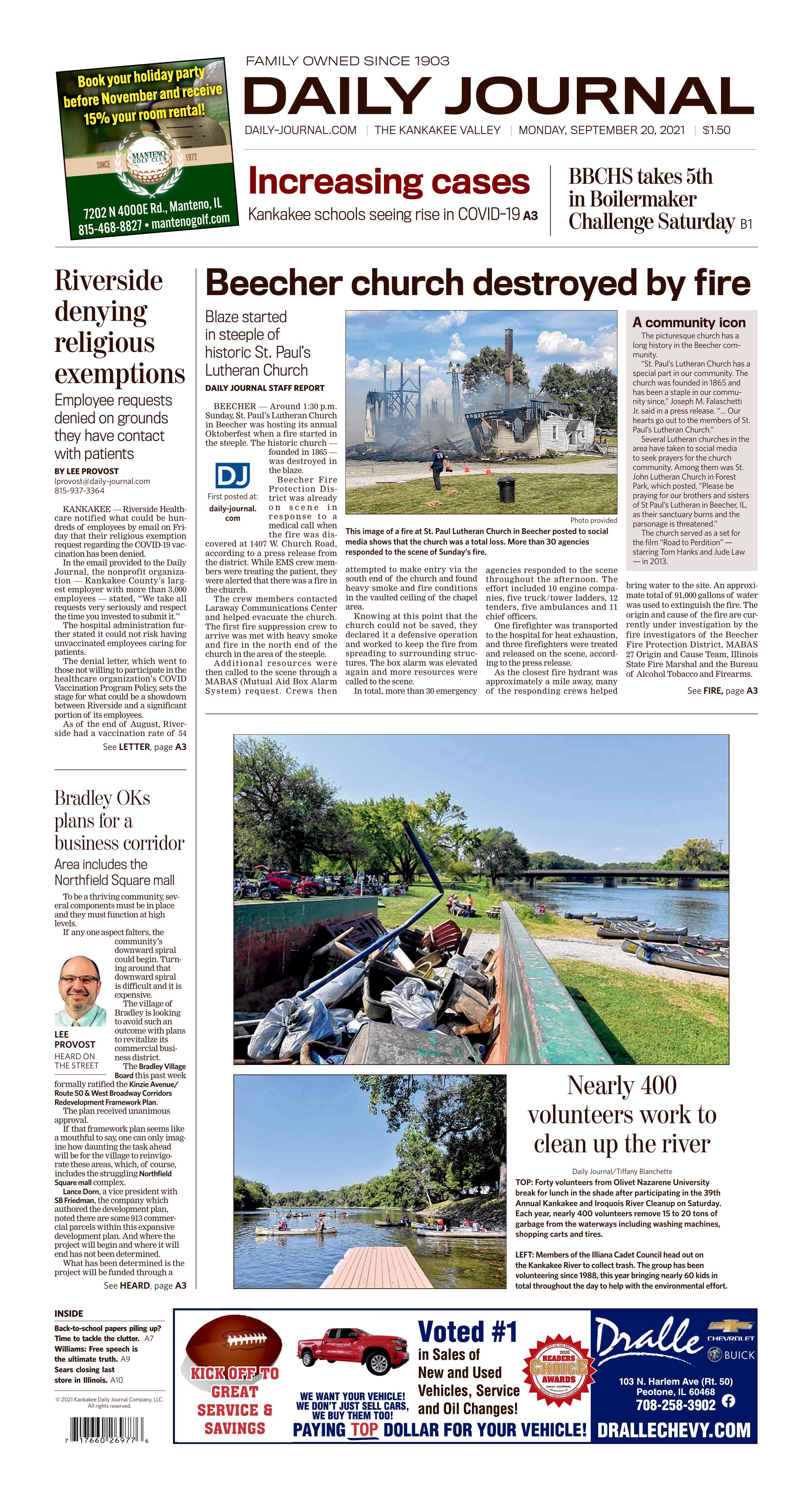 This image of a fire at St. Paul Lutheran Church in Beecher posted to social media shows that the church was a total loss. More than 30 agencies responded to the scene of Sunday’s fire.

St. Paul Lutheran Church in Beecher was hosting its Oktoberfest at the time of the fire. READ MORE.

This image of a fire at St. Paul Lutheran Church in Beecher was posted to social media.

BEECHER — Around 1:30 p.m. Sunday, St. Paul’s Lutheran Church in Beecher was hosting its annual Oktoberfest when a fire started in the steeple. The historic church — founded in 1865 — was destroyed in the blaze.

Beecher Fire Protection District was already on scene in response to a medical call when the fire was discovered at 1407 W. Church Road, according to a press release from the district. While EMS crew members were treating the patient, they were alerted that there was a fire in the church.

The crew members contacted Laraway Communications Center and helped evacuate the church. The first fire suppression crew to arrive was met with heavy smoke and fire in the north end of the church in the area of the steeple.

Additional resources were then called to the scene through a MABAS (Mutual Aid Box Alarm System) request. Crews then attempted to make entry via the south end of the church and found heavy smoke and fire conditions in the vaulted ceiling of the chapel area.

Knowing at this point that the church could not be saved, they declared it a defensive operation and worked to keep the fire from spreading to surrounding structures. The box alarm was elevated again and more resources were called to the scene.

One firefighter was transported to the hospital for heat exhaustion, and three firefighters were treated and released on the scene, according to the press release.

As the closest fire hydrant was approximately a mile away, many of the responding crews helped bring water to the site. An approximate total of 91,000 gallons of water was used to extinguish the fire. The origin and cause of the fire are currently under investigation by the fire investigators of the Beecher Fire Protection District, MABAS 27 Origin and Cause Team, Illinois State Fire Marshal and the Bureau of Alcohol Tobacco and Firearms.

The picturesque church has a long history in the Beecher community.

Several Lutheran churches in the area have taken to social media to seek prayers for the church community. Among them was St. John Lutheran Church in Forest Park, which posted, “Please be praying for our brothers and sisters of St Paul's Lutheran in Beecher, IL, as their sanctuary burns and the parsonage is threatened.”

The church served as a set for the film “Road to Perdition” — starring Tom Hanks and Jude Law — in 2013. 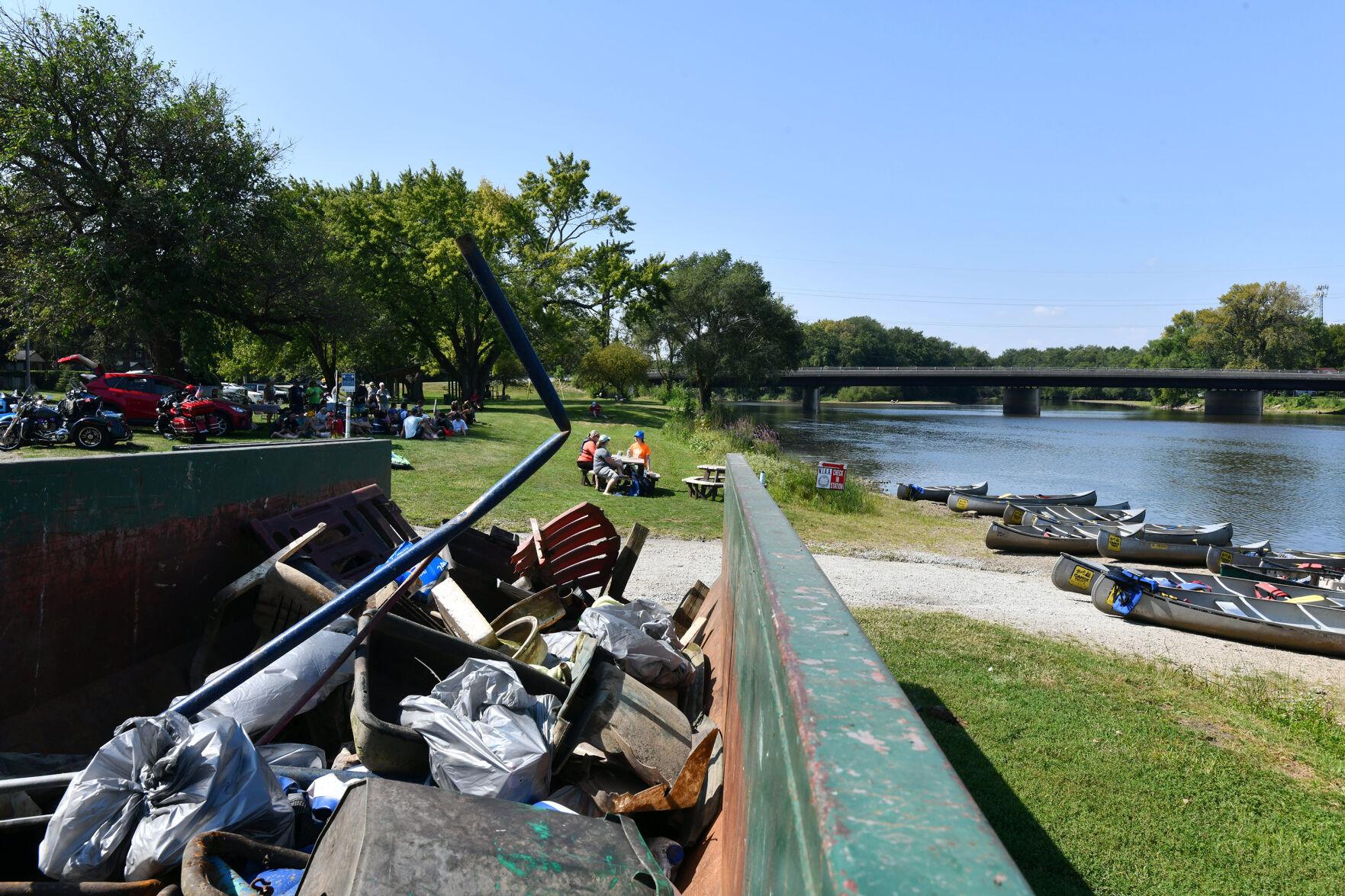 Nearly 400 volunteers work to clean up the river

Forty volunteers from Olivet Nazarene University break for lunch in the shade after participating in the 39th Annual Kankakee and Iroquois River Cleanup on Saturday. Each year, nearly 400 volunteers remove 15 to 20 tons of garbage from the waterways including washing machines, shopping carts and tires. 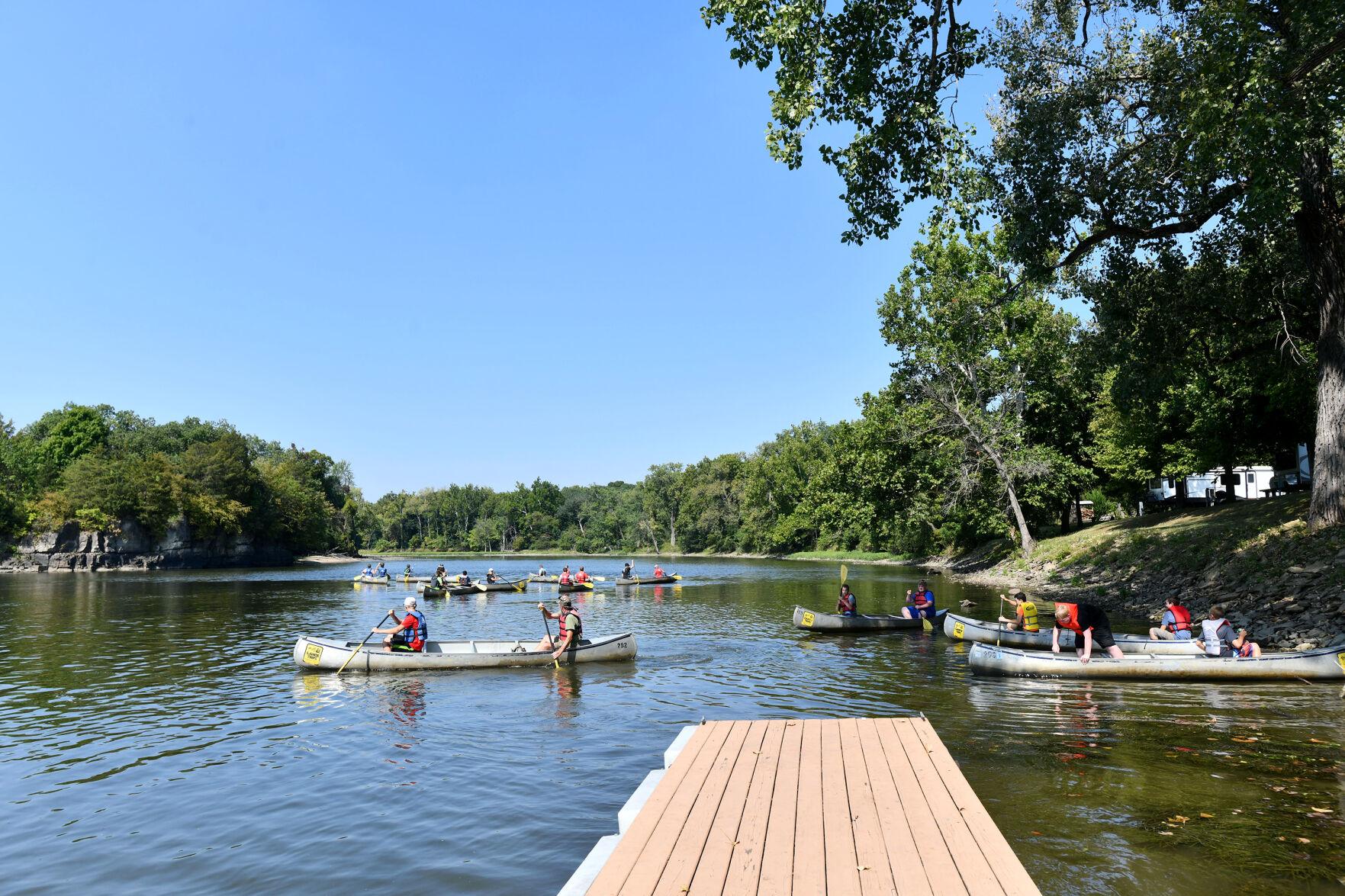 Members of the Illiana Cadet Council head out on the Kankakee River to collect trash during the 39th Annual Kankakee and Iroquois River Cleanup on Saturday. The group has been volunteering since 1988, this year bringing nearly 60 kids in total throughout the day to help with the environmental effort.

Riverside Medical Center could be headed for a showdown with a significant portion of its workforce due to the COVID-19 vaccination.

KANKAKEE — Riverside Healthcare notified employees by email on Friday that their religious exemption request regarding the COVID-19 vaccination has been denied.

In the email provided to the Daily Journal, the nonprofit organization — Kankakee County’s largest employer with more than 3,000 employees — stated, “We take all requests very seriously and respect the time you invested to submit it.”

The hospital administration further stated it could not risk having unvaccinated employees caring for patients.

The denial letter, which went to those not willing to participate in the healthcare organization’s COVID Vaccination Program Policy, sets the stage for what could be a showdown between Riverside and a significant portion of its employees.

As of the end of August, Riverside had a vaccination rate of 54 percent. The current rate was not available.

The denial form letter further stated, “Based on our review of your declination request and our COVID Vaccination Program Policy, your request has been denied. Although your religious or strongly held belief may otherwise qualify for an exemption, Riverside has decided to deny your request because you are in a patient-facing position.”

The hospital’s letter stated the safety of its patients and residents are its top priority. The letter stated unvaccinated staff working in patient-facing positions, creates an “undue hardship of safety risks and legal liability” due to the increased risk of transmission of the virus.

The letter went on to state employees not willing to become vaccinated may consider applying for non-patient-facing positions.

Riverside had previously informed its workforce that it has until Oct. 31 to become vaccinated. If at that deadline employees do not gain the vaccination, they will be placed on unpaid leave and eventually the non-complying employees will be fired.

AMITA Health St. Mary’s Hospital has a similar policy, but its deadline is Nov. 12.

In a Sept. 17 memo, Phil Kambic, Riverside’s president and CEO, reminded employees of the Aug. 27 announcement of the mandatory vaccination policy.

“This was done after careful consideration of the scientific evidence of the vaccine’s effectiveness and our obligation to protect the health and safety of our patients, staff and community members,” he wrote.

Kambic noted that President Joe Biden’s executive order regarding vaccinations for healthcare workers does not allow for a testing alternative in lieu of getting the vaccine.

“Riverside’s vaccination policy is consistent with the Biden executive order,” he said.

The approximate 53-acre site where the mall sits at North Kinzie Avenue is central to any plans the village has regarding moving forward on village redevelopment plans.

To be a thriving community, several components must be in place and they must function at high levels.

The village of Bradley is looking to avoid such an outcome with plans to revitalize its commercial business district.

If that framework plan seems like a mouthful to say, one can only imagine how daunting the task ahead will be for the village to reinvigorate these areas, which, of course, includes the struggling Northfield Square mall complex.

Lance Dorn, a vice president with SB Friedman, the company which authored the development plan, noted there are some 913 commercial parcels within this expansive development plan. And where the project will begin and where it will end has not been determined.

What has been determined is the project will be funded through a business district that will access an additional 1 percent sales tax — not including groceries nor medicine — to fund it. The new tax will take effect Jan. 1.

The business district will have a 23-year lifespan and early projections are the tax could produce some $160 million — a lofty number — which can only be used for upgrades within the designated business district.

The overriding thought is if significant attention is not placed upon this area sooner rather than later, it could fall into such disrepair that it could never recover.

Dorn said 84 percent of those parcels — or 774 of them — have shown deterioration. The district also faces a 21 percent vacancy rate. That is correct, one of every five properties is unoccupied.

The Bradley administration under the leadership of Mayor Mike Watson has demonstrated it is not afraid to take on challenges. One needs to only look at the purchase of the former Carson’s men’s store and the former JCPenney store in the Northfield Square property.

According to the district’s financial plan, $72 million would be committed to public works upgrades such as streets, sidewalks and utilities; $35 million toward existing building rehab; and $35 million for new construction.

Without attention paid to the area, Dorn doesn’t believe growth would be likely to occur.

Watson said it will likely take months for development plans to be completed, but he noted that was OK because it will take some time for the district to generate working capital.

The 913-parcel project footprint comprises 1,187 acres and there are many land uses within the district, meaning that while the area is a majority of commercial, industrial and parking lots, there is some residential within the district.

This will be a massive undertaking as Bradley is an older community and older communities, like an old house, have many issues not recognized until a layer or two has been pulled back.

Good luck, Bradley. And congratulations on an ambitious — and long overdue — plan.

Speaking of Bradley, how many people noticed this news nugget from last week?

The last remaining Sears store in Illinois will soon close. The Sears located in Schaumburg will close on Nov. 14. Sears’ parent company, Transformco, said the closure was part of a plan to redevelop the property as a part of a strategy to “unlock the value of the real estate” and to pursue a higher and better use for the location.