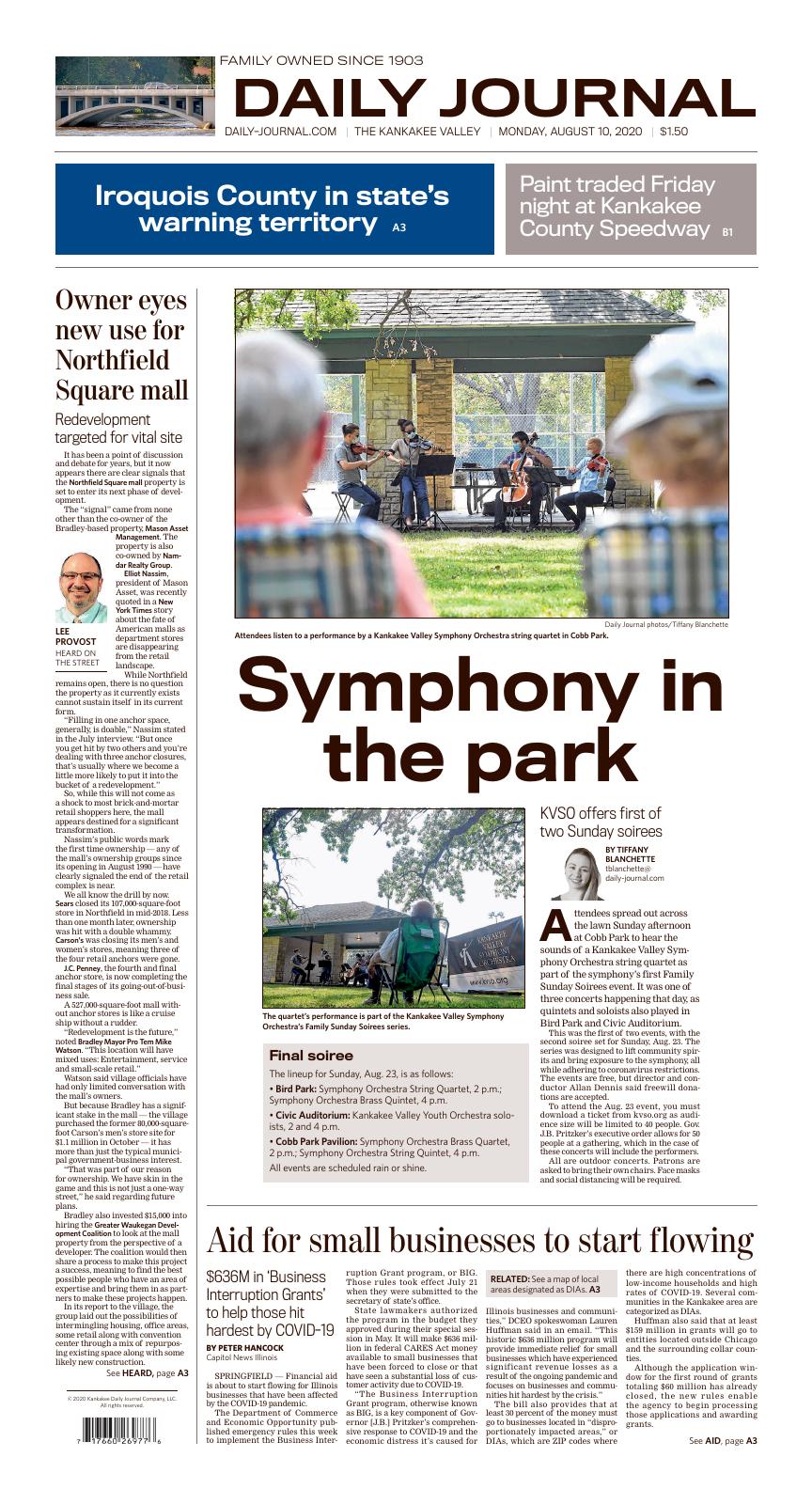 Attendees listen to a performance by a Kankakee Valley Symphony Orchestra string quartet in Cobb Park.

Two attendees picked a shady spot in Cobb Park to enjoy the sounds of the symphony.

Attendees listen to a performance by a Kankakee Valley Symphony Orchestra string quartet from their socially-distanced lawn chairs at Cobb Park on Sunday afternoon.

Attendees spread out across the lawn Sunday afternoon at Cobb Park to hear the sounds of a Kankakee Valley Symphony Orchestra string quartet as part of the symphony’s first Family Sunday Soirees event. It was one of three concerts happening that day, as quintets and soloists also played in Bird Park and Civic Auditorium.

This was the first of two events, with the second soiree set for Sunday, Aug. 23. The series was designed to lift community spirits and bring exposure to the symphony, all while adhering to coronavirus restrictions. The events are free, but director and conductor Allan Dennis said freewill donations are accepted.

To attend the Aug. 23 event, you must download a ticket from kvso.org as audience size will be limited to 40 people. Gov. J.B. Pritzker’s executive order allows for 50 people at a gathering, which in the case of these concerts will include the performers.

All are outdoor concerts. Patrons are asked to bring their own chairs. Face masks and social distancing will be required.

All events are scheduled rain or shine.

The bill provides that at least 30 percent of the money must go to businesses located in “disproportionately impacted areas,” with several communities in the Kankakee area falling into that category.

SPRINGFIELD — Financial aid is about to start flowing for Illinois businesses that have been affected by the COVID-19 pandemic.

The Department of Commerce and Economic Opportunity published emergency rules this week to implement the Business Interruption Grant program, or BIG. Those rules took effect July 21 when they were submitted to the secretary of state’s office.

State lawmakers authorized the program in the budget they approved during their special session in May. It will make $636 million in federal CARES Act money available to small businesses that have been forced to close or that have seen a substantial loss of customer activity due to COVID-19.

“The Business Interruption Grant program, otherwise known as BIG, is a key component of Governor [J.B.] Pritzker’s comprehensive response to COVID-19 and the economic distress it’s caused for Illinois businesses and communities,” DCEO spokeswoman Lauren Huffman said in an email. “This historic $636 million program will provide immediate relief for small businesses which have experienced significant revenue losses as a result of the ongoing pandemic and focuses on businesses and communities hit hardest by the crisis.”

The bill also provides that at least 30 percent of the money must go to businesses located in “disproportionately impacted areas,” or DIAs, which are ZIP codes where there are high concentrations of low-income households and high rates of COVID-19. Several communities in the Kankakee area are categorized as DIAs.

Huffman also said that at least $159 million in grants will go to entities located outside Chicago and the surrounding collar counties.

Although the application window for the first round of grants totaling $60 million has already closed, the new rules enable the agency to begin processing those applications and awarding grants.

During the first round, priority is being given to small businesses located in DIAs. Specifically, $20 million will be distributed to small businesses located in DIAs where there was property damage during recent civil unrest. Another $20 million is set aside for bars and restaurants; $10 million for barbershops and salons; and $10 million for gyms and fitness centers.

Those businesses must have met certain income requirements during 2019. They also must have been in business for at least three months prior to March 2020 and have incurred at least $10,000 in qualifying expenditures since March 21.

The BIG program also sets aside $270 million for licensed day care centers. An initial round of those grants are to be awarded by Sept. 30. Those grants are being administered by the Department of Human Services and will be awarded to facilities that receive at least 25 percent of their revenue through the Child Care Assistance Program and whose operating capacity has been reduced due to group size restrictions imposed by the Department of Children and Family Services to combat the spread of the novel coronavirus.

If funds allow, another round of grants will be awarded for the period Oct. 1 through Nov. 30, according to DCEO.

Grant awards may be used to cover operational costs such as staff wages and benefits, occupancy costs, materials, supplies and professional services that are eligible for federal Coronavirus Relief Fund reimbursements and are not otherwise covered by another grant or loan program such as the Payroll Protection Program or other disaster relief programs.

More information on how to apply for the grants is available on the DCEO website.{span class=”print_trim”}

Shoppers enter the Sears at Northfield Square Mall in Bradley during its final days of closing sales.

It has been a point of discussion and debate for years, but it now appears there are clear signals that the Northfield Square mall property is set to enter its next phase of development.

The “signal” came from none other than the co-owner of the Bradley-based property, Mason Asset Management. The property is also co-owned by Namdar Realty Group.

Elliot Nassim, president of Mason Asset, was recently quoted in a New York Times story about the fate of American malls as department stores are disappearing from the retail landscape.

While Northfield remains open, there is no question the property as it currently exists cannot sustain itself in its current form.

“Filling in one anchor space, generally, is doable,” Nassim stated in the July interview. “But once you get hit by two others and you’re dealing with three anchor closures, that’s usually where we become a little more likely to put it into the bucket of a redevelopment.”

So, while this will not come as a shock to most brick-and-mortar retail shoppers here, the mall appears destined for a significant transformation.

Nassim’s public words mark the first time ownership — any of the mall’s ownership groups since its opening in August 1990 — have clearly signaled the end of the retail complex is near.

We all know the drill by now. Sears closed its 107,000-square-foot store in Northfield in mid-2018. Less than one month later, ownership was hit with a double whammy. Carson’s was closing its men’s and women’s stores, meaning three of the four retail anchors were gone.

J.C. Penney, the fourth and final anchor store, is now completing the final stages of its going-out-of-business sale.

A 527,000-square-foot mall without anchor stores is like a cruise ship without a rudder.

Watson said village officials have had only limited conversation with the mall’s owners.

But because Bradley has a significant stake in the mall — the village purchased the former 80,000-square-foot Carson’s men’s store site for $1.1 million in October — it has more than just the typical municipal government-business interest.

“That was part of our reason for ownership. We have skin in the game and this is not just a one-way street,” he said regarding future plans.

Bradley also invested $15,000 into hiring the Greater Waukegan Development Coalition to look at the mall property from the perspective of a developer. The coalition would then share a process to make this project a success, meaning to find the best possible people who have an area of expertise and bring them in as partners to make these projects happen.

In its report to the village, the group laid out the possibilities of intermingling housing, office areas, some retail along with convention center through a mix of repurposing existing space along with some likely new construction.

In other words, whatever direction development may take at Northfield Square mall is that what we see there today is most certainly what we will not see in the future if this site is to remain a key piece in the future development of Kankakee County.

In fact, this property — based on where it sits between the expanding manufacturing plants of CSL Behring and Nucor Steel, along with retail growth along Illinois Route 50 here — must remain vital. This area cannot develop to its highest and best use if the mall property fails to become vibrant.

The region took its shot with a mall. Unfortunately, the development turned out to be on the back end of mall’s popularity with shoppers. This fact doesn’t mean the location is cursed or wrong. It only means there is a new opportunity for getting it right.

Our region cannot afford getting it wrong. 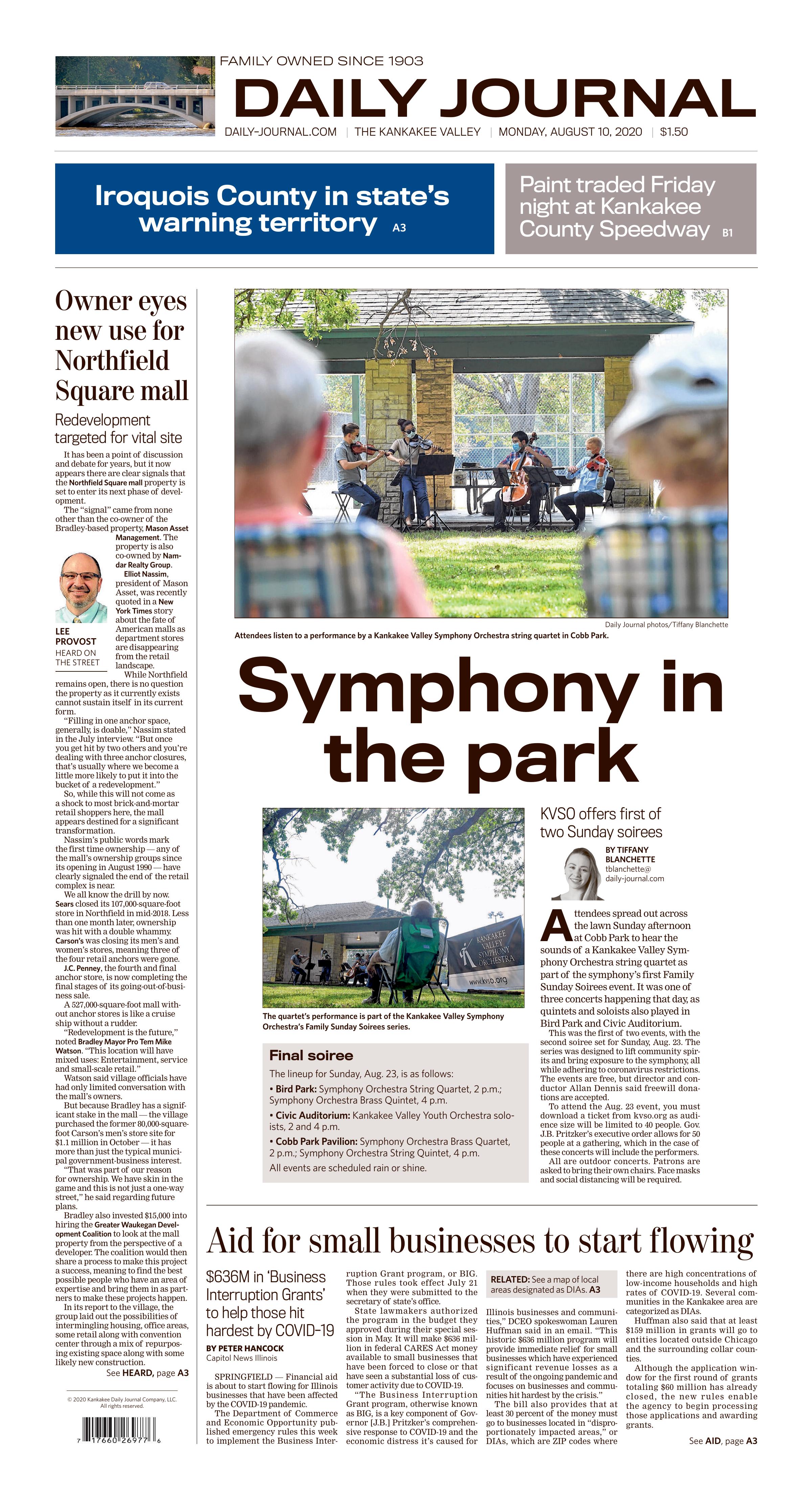