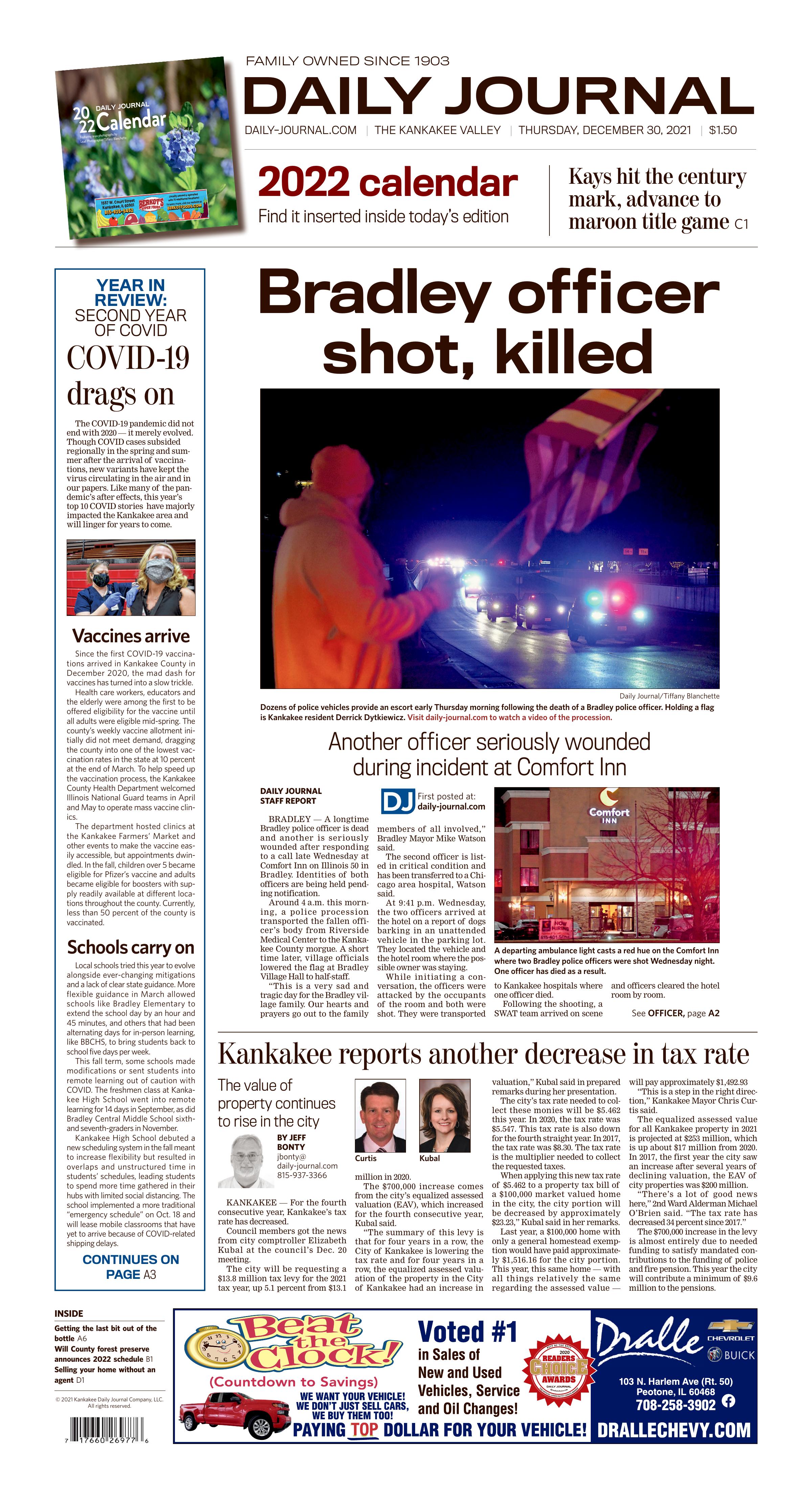 A departing ambulance light casts a red hue on the Comfort Inn where two Bradley police officers were shot Wednesday night. One officer has died as a result.

Officers from multiple agencies gather in the lobby of the Comfort Inn where two Bradley Police officers were shot Wednesday night. One officer has died as a result.

Police cars blockade the entrance to the Northfield Square Mall Loop near the Comfort Inn where two Bradley Police officers were shot Wednesday night. One officer has died.

BRADLEY — A longtime Bradley police officer is dead and another is seriously wounded after responding to a call late Wednesday at Comfort Inn on Illinois 50 in Bradley. Identities of both officers are being held pending notification.

Around 4 a.m. this morning, a police procession transported the fallen officer’s body from Riverside Medical Center to the Kankakee County morgue. A short time later, village officials lowered the flag at Bradley Village Hall to half-staff.

“This is a very sad and tragic day for the Bradley village family. Our hearts and prayers go out to the family members of all involved,” Bradley Mayor Mike Watson said.

The second officer is listed in critical condition and has been transferred to a Chicago area hospital, Watson said.

At 9:41 p.m. Wednesday, the two officers arrived at the hotel on a report of dogs barking in an unattended vehicle in the parking lot. They located the vehicle and the hotel room where the possible owner was staying.

While initiating a conversation, the officers were attacked by the occupants of the room and both were shot. They were transported to Kankakee hospitals where one officer died.

Following the shooting, a SWAT team arrived on scene and officers cleared the hotel room by room.

Around 4 a.m., Kankakee County Sheriff Department took to Facebook to seek the public’s help in finding Darius D. Sullivan, 25. An arrest warrant has been issued for Sullivan and police are also looking for another person of interest believed to be involved, according to a news release from the Bradley Police Department.

Police say that if you encounter Sullivan, do not attempt to confront him as he is believed to be armed and dangerous. Rather, police say, call the Illinois State Police Hotline at 815-698-2315. You can remain anonymous through that hotline or through CrimeStoppers at 815-93-CRIME.

Sullivan was featured on the sheriff department’s Warrant Wednesday on June 16. He was wanted on a warrant for residential burglary, theft/deception and knowingly damaging property.

He was also featured in May 2018, wanted on warrants for burglary, theft, and criminal damage to government property.

This is the first time Kankakee County has seen an officer shot in the line of duty since the death of Anthony Samfay in 1996.

A Kankakee police officer, Samfay was shot and killed on Oct. 17, 1996, during a routine traffic stop. He was 26 years old and had been on the job for just two years.

Council members got the news from city comptroller Elizabeth Kubal at the council’s Dec. 20 meeting.

The $700,000 increase comes from the city’s equalized assessed valuation (EAV), which increased for the fourth consecutive year, Kubal said.

When applying this new tax rate of $5.462 to a property tax bill of a $100,000 market valued home in the city, the city portion will be decreased by approximately $23.23,” Kubal said in her remarks.

Last year, a $100,000 home with only a general homestead exemption would have paid approximately $1,516.16 for the city portion. This year, this same home — with all things relatively the same regarding the assessed value — will pay approximately $1,492.93

“This is a step in the right direction,” Kankakee Mayor Chris Curtis said.

The equalized assessed value for all Kankakee property in 2021 is projected at $253 million, which is up about $17 million from 2020. In 2017, the first year the city saw an increase after several years of declining valuation, the EAV of city properties was $200 million.

The $700,000 increase in the levy is almost entirely due to needed funding to satisfy mandated contributions to the funding of police and fire pension. This year the city will contribute a minimum of $9.6 million to the pensions. 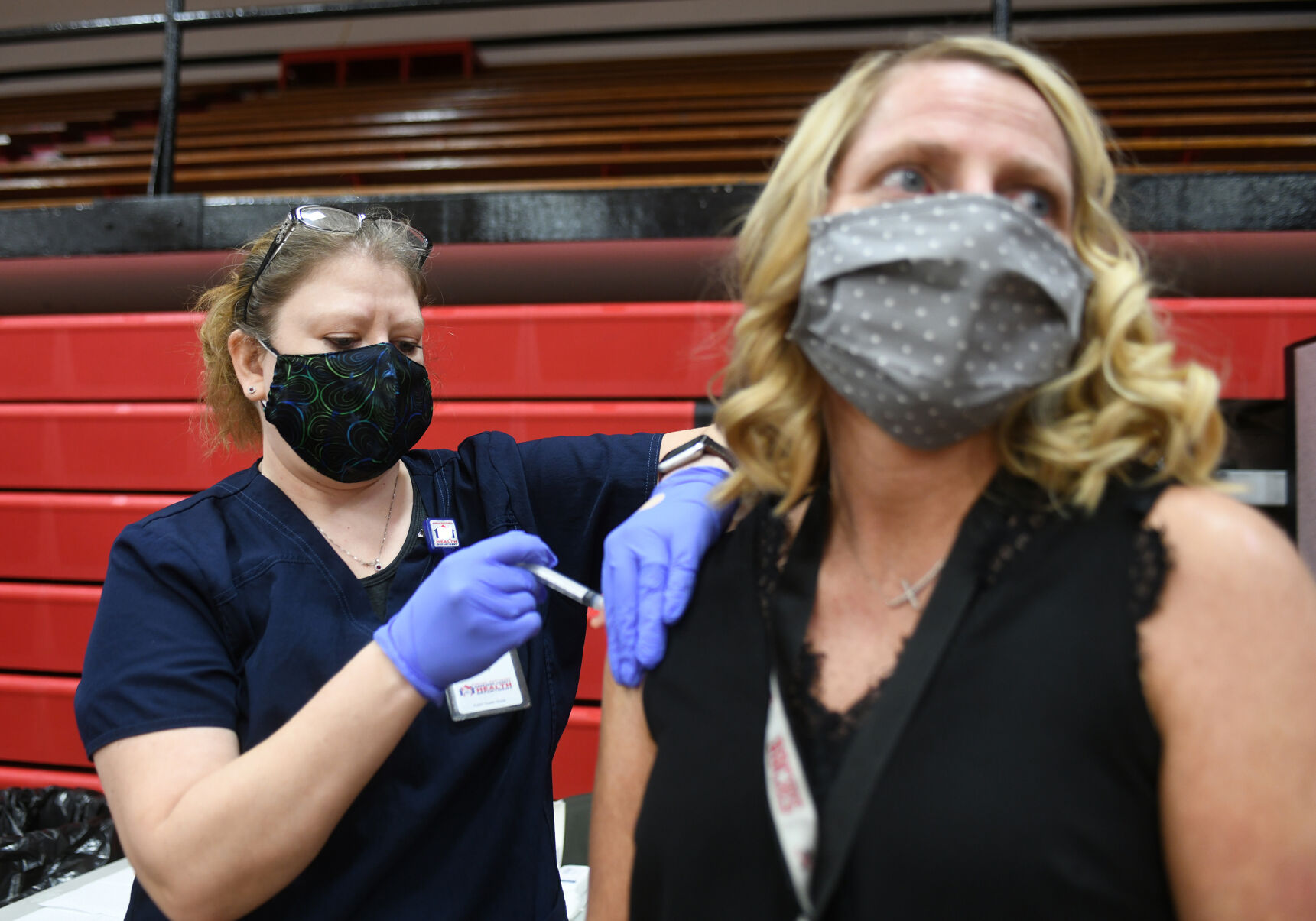 Kelly VandenHout, administrative assistant for Bradley-Bourbonnais Community High School’s athletic office, looks away as she receives her first dose of the COVID-19 vaccine in January from Kankakee County Health Department public health nurse Audrey Shivers. VandenHout said she decided to get the vaccine to get back to normal life, and hopefully the return of sports for students.