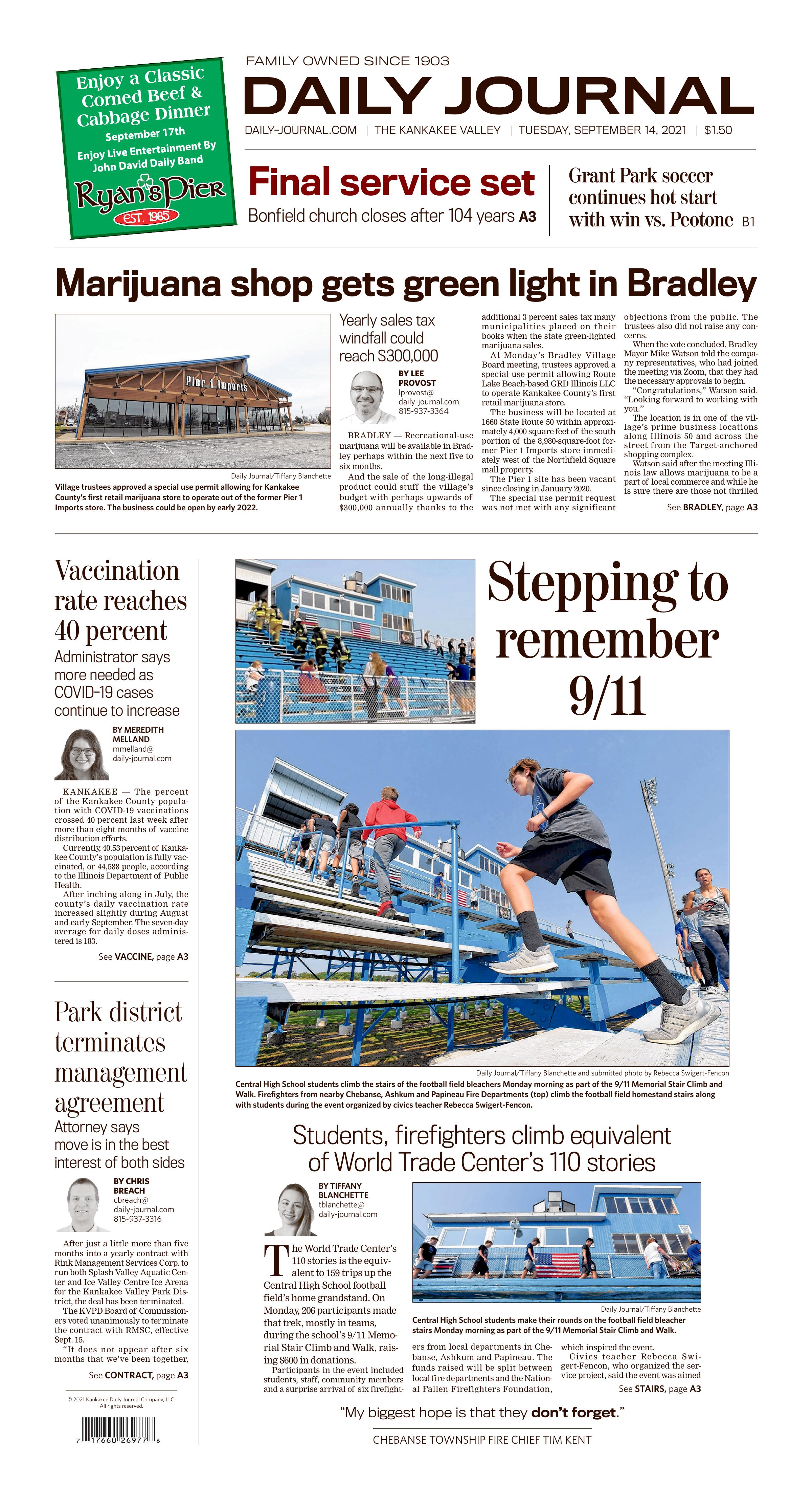 Village trustees approved a special use permit allowing for Kankakee County’s first retail marijuana store to operate out of the former Pier 1 Imports store. The business could be open by early 2022.

BRADLEY — Recreational-use marijuana will be available in Bradley perhaps within the next five to six months.

And the sale of the long-illegal product could stuff the village’s budget with perhaps upwards of $300,000 annually thanks to the additional 3 percent sales tax many municipalities placed on their books when the state green-lighted marijuana sales.

The business will be located at 1660 State Route 50 within approximately 4,000 square feet of the south portion of the 8,980-square-foot former Pier 1 Imports store immediately west of the Northfield Square mall property.

The Pier 1 site has been vacant since closing in January 2020.

The special use permit request was not met with any significant objections from the public. The trustees also did not raise any concerns.

When the vote concluded, Bradley Mayor Mike Watson told the company representatives, who had joined the meeting via Zoom, that they had the necessary approvals to begin.

“Congratulations,” Watson said. “Looking forward to working with you.”

The location is in one of the village’s prime business locations along Illinois 50 and across the street from the Target-anchored shopping complex.

Watson said after the meeting Illinois law allows marijuana to be a part of local commerce and while he is sure there are those not thrilled with the prospect of having a retail devoted to this type of product, the law is clear on this subject.

He said while some may object to this being in a highly visible area, he said that may aid the business in terms of making sure everything operates properly.

If all goes as hoped by the ownership group, headed by Nevil Patel, of Columbia, Mo., the business could be open by early 2022. At last week’s Bradley Planning & Zoning Commission, Patel said upwards of $300,000 to $500,000 could be invested into the site to get it ready for business.

The location is owned by Dr. Theodore Pantos, of Grosse Pointe, Mich.

Similar to alcohol, a purchaser of marijuana must be 21 years of age.

Adult-use marijuana sales is a big and growing business in Illinois. According to the state’s Illinois Department of Financial and Professional Regulations, the department which oversees the retail sale of marijuana, some $121.9 million of the substance was sold statewide in August. In August 2020, the state’s sales figure was $63.9 million.

Central High School students climb the stairs of the football field bleachers Monday morning as part of the 9/11 Memorial Stair Climb and Walk. Firefighters from nearby Chebanse, Ashkum and Papineau Fire Departments (top) climb the football field homestand stairs along with students during the event organized by civics teacher Rebecca Swigert-Fencon.

Central High School students make their rounds on the football field bleacher stairs and the track below on Monday morning as part of the 9/11 Memorial Stair Climb and Walk.

The World Trade Center’s 110 stories is the equivalent to 159 trips up the Central High School football field’s home grandstand. On Monday, 206 participants made that trek, mostly in teams, during the school’s 9/11 Memorial Stair Climb and Walk, raising $600 in donations.

Participants in the event included students, staff, community members and a surprise arrival of six firefighters from local departments in Chebanse, Ashkum and Papineau. The funds raised will be split between local fire departments and the National Fallen Firefighters Foundation, which inspired the event.

Civics teacher Rebecca Swigert-Fencon, who organized the service project, said the event was aimed to be a way for the students to learn and remember a historic moment in United States history combined with a way to give back to the community.

“Having them see the firefighters out here climbing the stairs and hearing the students say they had chills from watching them is really meaningful and exactly what we wanted them to get out of this,” she said. “This is bigger than just an assignment that goes in the grade book, this is something that is so meaningful.”

Students helped to plan the event and reached out to the community along with participating in a webinar on Friday hosted by the National September 11 Memorial & Museum in New York, which offered a collection of first-person accounts and guest speakers from the museum among other interactive segments.

One student, senior Kamryn Jemar, said seeing the firefighters walk the stairs in full uniform with them was memorable.

“I’m guessing it reminded some of them just how much of an impact they make on us, because they definitely do,” he said.

Chebanse Township Fire Chief Tim Kent, a firefighter since 1993, said seeing the students participate in the climb, or walk the distance around the track, showed a huge amount of respect.

“We’ve got firemen that are out here walking that were just 1 year old when it happened,” Kent said. “It’s good to see that they’re out here. My biggest hope is that they don’t forget.”

That sentiment was echoed by many staff and community members — never forget.

“It’s still surreal to me that these students weren’t alive,” Swigert-Fencon said. “It needs to be remembered; it can’t go away. By doing this, it doesn’t go away.”

"My biggest hope is that they don't forget.”

The Moderna COVID-19 vaccine is prepared at a recent vaccine clinic.

Currently, 40.53 percent of Kankakee County’s population is fully vaccinated, or 44,588 people, according to the Illinois Department of Public Health.

After inching along in July, the county’s daily vaccination rate increased slightly during August and early September. The seven-day average for daily doses administered is 183.

“That’s still 60 percent of our population that is not vaccinated,” he said. “It’s helping to cause this surge that Kankakee is seeing, and even though the region’s [COVID] numbers may be going down, Kankakee County’s numbers are still staying the same or slightly increasing.”

The test positivity seven day average for Region 7, which includes Kankakee and Will counties, has lowered from around 7 percent at the end of August to 5.9 percent on Sept. 10, according to IDPH data. Kankakee County’s average dipped last week but reached 8.5 percent on Sept. 10.

According to the Centers for Disease Control and Prevention’s COVID data tracker, Kankakee County had 314 new COVID-19 cases and 25 new hospital admissions in the past seven days, as of Monday.

“Vaccination is the No. 1 way to help slow this COVID-19 down, but I can’t make people do what they don’t want to do,” Bevis said. “Or in some cases, they’re not eligible for a vaccine based upon their age, so I understand that.”

All surrounding counties except Iroquois County have higher vaccination rates, with Will County at 54.04 percent vaccinated as of Monday. Illinois’ total population is 53.88 percent vaccinated, according to IDPH.

In recent weeks, AMITA Health and Riverside Healthcare both announced their staff must be fully vaccinated by fall deadlines.

Illinois Gov. JB Pritzker also has required all teachers, professors, higher education students and health care workers in the state to get the first dose of the vaccine or submit weekly testing by Sept. 5.

Last Thursday, President Joe Biden announced a mandate where employers with over 100 workers must require employees to be vaccinated or test for the virus weekly. Executive branch government workers and contractors and health workers whose facilities receive Medicare or Medicaid funding will be required to be vaccinated as well.

The Kankakee Valley Park District Board is ending its contract that oversees the management of Ice Valley Centre Ice Arena and Splash Valley Aquatic Park.

After just a little more than five months into a yearly contract with Rink Management Services Corp. to run both Splash Valley Aquatic Center and Ice Valley Centre Ice Arena for the Kankakee Valley Park District, the deal has been terminated.

The KVPD Board of Commissioners voted unanimously to terminate the contract with RMSC, effective Sept. 15.

“It does not appear, after six months that we’ve been together, that it is a good fit for them or us,” said Dayna Heitz, KVPD executive director.

Heitz said she has asked board attorney David Freeman to work with RMSC’s owner Tom Hillgrove and his attorney to sever ties. Initially, RMSC left the option open for the park district to opt out of the agreement.

Freeman said the district received a letter from RMSC’s attorney that they agreed in general that it was in the best interest to terminate the agreement. RMSC has incurred higher insurance cost due to COVID.

“It looks as though this can move forward to an amicable resolution rather than a fight,” Freeman said.

“We really need to get those covered right away,” said Hillgrove, who was attending the meeting via Zoom. “There’s really no reason not to.”

Heitz said the district needs to look at all the financials, and that she will go over those with Freeman to determine how much is still owed to RMSC.

“If there’s anything owed, the district will honor that,” Heitz said.

Freeman said they’ve just started the process of terminating the contract, and they have to look at all the numbers.

Board member Bill Spriggs asked why would the district owe the management firm that much money.

“Tom says it’s $99,000,” Heitz said. “It may be, it may not. However, whatever is their payroll, there are bills that we have paid. I don’t know if our bills are included in their financials, or they aren’t. There’s a lot of moving parts to this. Basically, don’t be upset about the amount of money because we would have paid it anyway.”

Heitz will get with Freeman today to go over the financials and determine how much is owed to RMSC. Freeman told Hillgrove any money owed would be paid within 30 days of the contract termination date.

“We’re willing to walk away and have a professional transition, relieve all our contracts with our employees so everybody can go to work for you and we’ll do that,” Hillgrove said. “We’ll do it cheerfully, but we need to get paid. The park district was supposed to fund this. We shouldn’t be this far out, so all we’re asking is, ‘Live up to the agreement.’”

The park district will now take over running Ice Valley again, beginning this week. Heitz said there was some good that came out of the agreement with RMSC. She said the district couldn’t have reopened Splash Valley without its help.