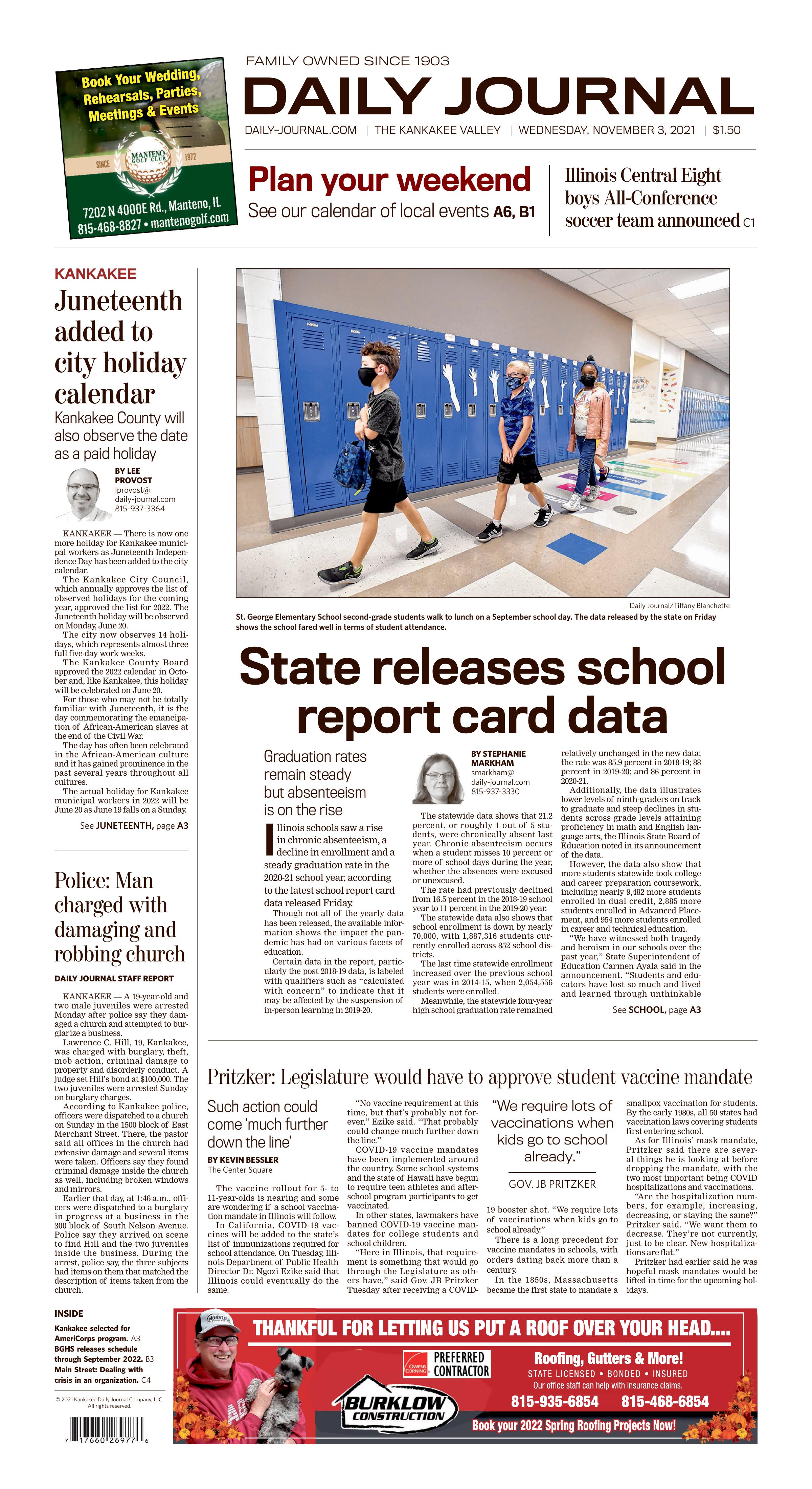 St. George Elementary School second-grade students walk to lunch on a September school day. The data released by the state on Friday shows the school fared well in terms of student attendance.

Illinois schools saw a rise in chronic absenteeism, a decline in enrollment and a steady graduation rate in the 2020-21 school year, according to the latest school report card data released Friday.

Though not all of the yearly data has been released, the available information shows the impact the pandemic has had on various facets of education.

Certain data in the report, particularly the post 2018-19 data, is labeled with qualifiers such as “calculated with concern” to indicate that it may be affected by the suspension of in-person learning in 2019-20.

The statewide data shows that 21.2 percent, or roughly 1 out of 5 students, were chronically absent last year. Chronic absenteeism occurs when a student misses 10 percent or more of school days during the year, whether the absences were excused or unexcused.

The statewide data also shows that school enrollment is down by nearly 70,000, with 1,887,316 students currently enrolled across 852 school districts.

The last time statewide enrollment increased over the previous school year was in 2014-15, when 2,054,556 students were enrolled.

Additionally, the data illustrates lower levels of ninth-graders on track to graduate and steep declines in students across grade levels attaining proficiency in math and English language arts, the Illinois State Board of Education noted in its announcement of the data.

“We have witnessed both tragedy and heroism in our schools over the past year,” State Superintendent of Education Carmen Ayala said in the announcement. “Students and educators have lost so much and lived and learned through unthinkable obstacles, but loss is not the whole story.”

The state plans to release its delayed district- and school-level standardized test data on Dec. 2, as the testing window was extended last spring because of the pandemic. Summative school designations for 2020-21 have not been calculated. The designation provides a snapshot of how schools are doing based on attendance, test scores, survey participation and other indicators.

How do Kankakee County school districts compare with statewide trends?

County schools are mostly on par with the statewide attendance rate of 92.5 percent.

On the low end of attendance in the county was Pembroke School District, which had a rate of 83.4 percent.

Kankakee School District’s student attendance rate was highest of the county schools at 99.4 percent; the district’s chronic absenteeism rate was also an outlier at just 1.2 percent.

Kankakee Superintendent Genevra Walters explains that the difference is a result of the way the district calculated attendance during the 2020-21 year.

“The students we counted as chronically absent during the pandemic were those students that we did not have contact with at all or that we seldom had contact with,” she said.

The district conducted home visits and phone calls to maintain contact, which was very effective with younger kids, she said; there were only a few that could not be reached.

“A lot of kids were fully remote, so as long as they were doing some work weekly, and they had contact with a teacher or administrator on a regular basis, then we counted them as positive attendance,” she said.

The bigger problem the district had was in getting students to complete their work, she added.

When it comes to Kankakee High School’s four-year graduation rate of 73.4 percent last year, Walters noted that a significant number of students were not completing their work — many had started working to support their families or were otherwise distracted by the pandemic.

“We had a significant number of students that weren’t doing the work they needed to graduate,” she said.

The district is keeping track of about 70 students that did not graduate last year because they fell behind on earning enough credits, and Walters expects most of them will finish by the end of this school year. Those students would be counted in next year’s five-year graduation rate.

St. Anne Community High School had almost the same four-year graduation rate last year at 73.9 percent; the statewide rate was 86 percent, and most Kankakee County high schools were above that in the mid-90 percent range.

St. Anne also had a higher dropout rate than other county high schools at 5.2 percent; the state average was 2.1 percent.

The vaccine rollout for 5- to 11-year-olds is nearing and some are wondering if a school vaccination mandate in Illinois will follow.

In California, COVID-19 vaccines will be added to the state’s list of immunizations required for school attendance. On Tuesday, Illinois Department of Public Health Director Dr. Ngozi Ezike said that Illinois could eventually do the same.

“No vaccine requirement at this time, but that’s probably not forever,” Ezike said. “That probably could change much further down the line.”

COVID-19 vaccine mandates have been implemented around the country. Some school systems and the state of Hawaii have begun to require teen athletes and after-school program participants to get vaccinated.

In other states, lawmakers have banned COVID-19 vaccine mandates for college students and school children.

“Here in Illinois, that requirement is something that would go through the Legislature as others have,” said Gov. JB Pritzker Tuesday after receiving a COVID-19 booster shot. “We require lots of vaccinations when kids go to school already.”

There is a long precedent for vaccine mandates in schools, with orders dating back more than a century.

In the 1850s, Massachusetts became the first state to mandate a smallpox vaccination for students. By the early 1980s, all 50 states had vaccination laws covering students first entering school.

As for Illinois’ mask mandate, Pritzker said there are several things he is looking at before dropping the mandate, with the two most important being COVID hospitalizations and vaccinations.

“Are the hospitalization numbers, for example, increasing, decreasing, or staying the same?” Pritzker said. “We want them to decrease. They’re not currently, just to be clear. New hospitalizations are flat.”

Pritzker had earlier said he was hopeful mask mandates would be lifted in time for the upcoming holidays.

KANKAKEE — There is now one more holiday for Kankakee municipal workers as Juneteenth Independence Day has been added to the city calendar.

The Kankakee City Council, which annually approves the list of observed holidays for the coming year, approved the list for 2022. The Juneteenth holiday will be observed on Monday, June 20.

The Kankakee County Board approved the 2022 calendar in October and, like Kankakee, this holiday will be celebrated on June 20.

For those who may not be totally familiar with Juneteenth, it is the day commemorating the emancipation of African-American slaves at the end of the Civil War.

The day has often been celebrated in the African-American culture and it has gained prominence in the past several years throughout all cultures.

The actual holiday for Kankakee municipal workers in 2022 will be June 20 as June 19 falls on a Sunday.

The Juneteenth name is actually a blending of two words: June and nineteenth. For more than 150 years, African-American communities have celebrated this day. It is believed this day was first celebrated in 1866.

Kankakee is one of the first governmental bodies to approve its 2022 holiday calendar.

The state of Illinois officially made Juneteenth a state holiday when Gov. JB Pritzker signed the bill in June 2021 to commemorate the date. While the state will recognize the holiday in 2022, it will not have the corresponding paid holiday because June 19 falls on a Sunday.

The first time the state will have the holiday as a paid day off will be in 2023.

KANKAKEE — A 19-year-old and two male juveniles were arrested Monday after police say they damaged a church and attempted to burglarize a business.

According to Kankakee police, officers were dispatched to a church on Sunday in the 1500 block of East Merchant Street. There, the pastor said all offices in the church had extensive damage and several items were taken. Officers say they found criminal damage inside the church as well, including broken windows and mirrors.

Earlier that day, at 1:46 a.m., officers were dispatched to a burglary in progress at a business in the 300 block of South Nelson Avenue. Police say they arrived on scene to find Hill and the two juveniles inside the business. During the arrest, police say, the three subjects had items on them that matched the description of items taken from the church.