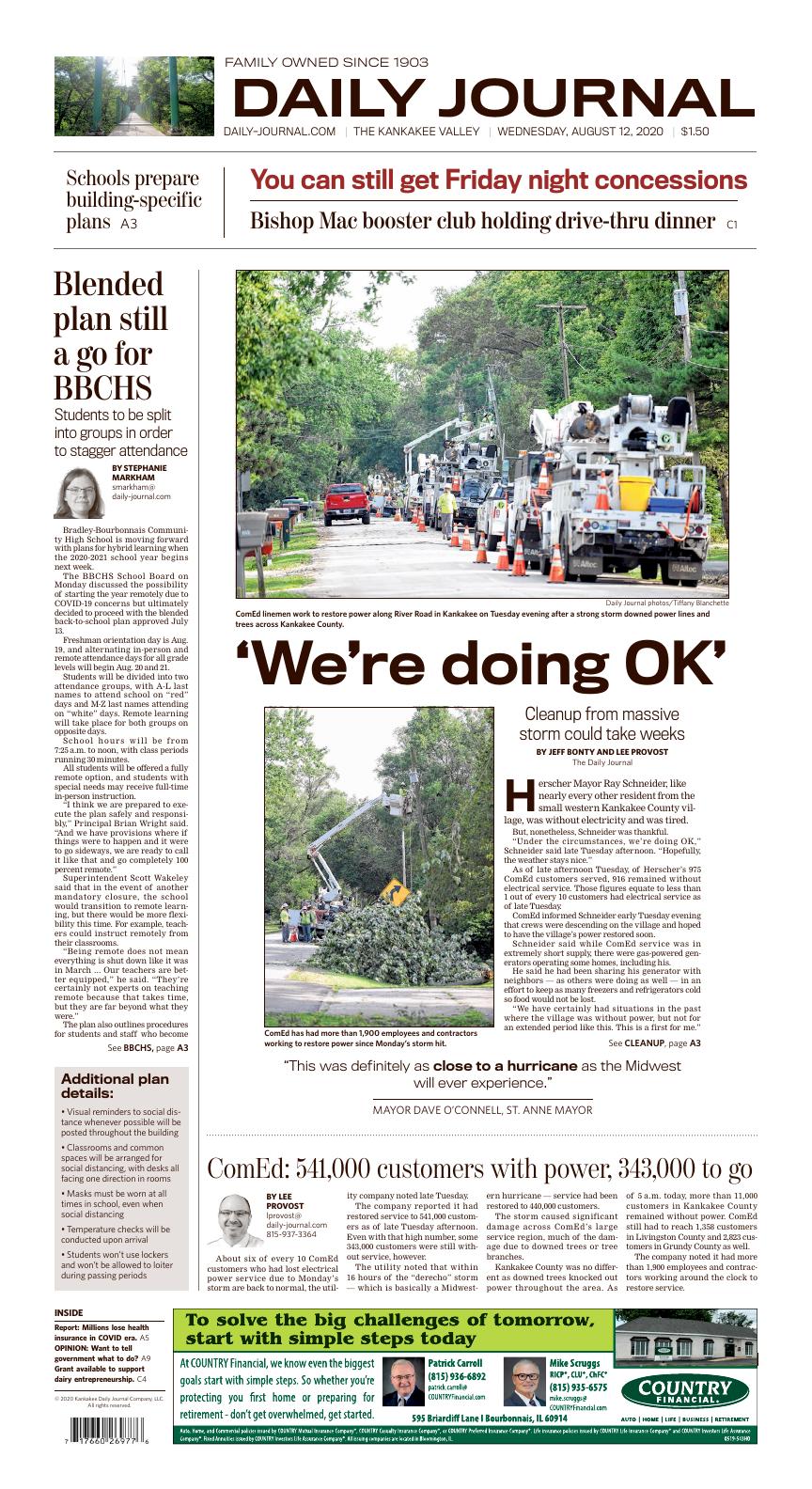 Herscher Mayor Ray Schneider, like nearly every other resident from the small western Kankakee County village, was without electricity and was tired.

But, nonetheless, Schneider was thankful.

ComEd informed Schneider early Tuesday evening that crews were descending on the village and hoped to have the village’s power restored soon.

Schneider said while ComEd service was in extremely short supply, there were gas-powered generators operating some homes, including his.

He said he had been sharing his generator with neighbors — as others were doing as well — in an effort to keep as many freezers and refrigerators cold so food would not be lost.

“We have certainly had situations in the past where the village was without power, but not for an extended period like this. This is a first for me.” Thank goodness we’re not in the winter or its 100 degrees out. We will endure.”

While the village was largely powerless, Schneider was aware other Kankakee County communities were hit even harder — specifically Kankakee.

“This storm was massive, but as far as I know, no one was hurt. We are blessed for that. Everything else can be fixed and cleaned up.”

Kankakee’s lower Riverview section may have suffered the most storm damage, but the west side also absorbed massive blows as well, officials noted.

Countless trees, many being decades-old oak trees were toppled in Riverview and with limited areas to fall, several wound up crashing into homes and garages on their way down.

“It will take weeks to get through all of this,” a city worker noted. “This storm came through with a vengeance. This is not going to be an easy fix.”

As of Tuesday afternoon, 95 percent of the residents of Pembroke Township were without power, Township Supervisor Brenda Miles said.

“The only people with power are those who live off the grid or have a generator,” Miles said.

ComEd said it would be Aug. 15 for the power to be restored in the township.

“We are hoping and praying it is sooner,” Miles said.

Residents who have wells as their water source have no access due to the power outage. The 67-year-old Miles said it was one of the worst storms she has seen.

“It wasn’t just one section [of Pembroke]. This hit the whole [township],” she said.

On Tuesdays each week, township officials hand out fresh fruit and vegetables to residents at the Community Center’s senior citizens center. Miles said they instead delivered to homes on this Tuesday.

On Marla Terrace, Memenga said an oak tree measuring about 60 inches in diameter snapped at its base and fell on a pickup truck, a garage and a vehicle inside the garage.

“We’ve got two to three days left out there,” he said Tuesday afternoon.

They will be picking up storm debris throughout the village the rest of this week. Memenga said they will haul away 75 to 80 dump truck loads of storm debris.

Crews were out from 4 to 8 p.m. Monday clearing streets and stacking debris that crews picked up on Tuesday.

Mayor Dave O’Connell said while plenty of damage was suffered in St. Anne, things could have been much worse. He noted by late Tuesday afternoon, much of the village had electrical service.

“This was definitely as close to a hurricane as the Midwest will ever experience. This storm was fast moving that’s for sure.”

The mayor noted clean up will take a couple weeks and village hall sustained some roof damage.

“And our ‘Welcome to St. Anne’ sign was also blown down. I’m not sure what that means,” he joked.

The National Weather Service’s observation station at the Greater Kankakee Airport was knocked out when the airport lost power, leaving meteorologists with no records of wind speeds during the storm.

The last reading came at 3:36 p.m. before the storm hit. The temperature was 90 degrees with a dew point of 79 percent under mostly cloudy skies. Winds were out of the southwest at 13 mph.

Airport manager Jeff Benoit said they had not heard back from ComEd as to how long it would take to get the power restored.

"This was definitely as close to a hurricane as the Midwest will ever experience."

About six of every 10 ComEd customers who had lost electrical power service due to Monday’s storm are back to normal, the utility company noted late Tuesday.

The company reported it had restored service to 541,000 customers as of late Tuesday afternoon. Even with that high number, some 343,000 customers were still without service, however.

The utility noted that within 16 hours of the “derecho” storm — which is basically a Midwestern hurricane — service had been restored to 440,000 customers.

The storm caused significant damage across ComEd’s large service region, much of the damage due to downed trees or tree branches.

The company noted it had more than 1,900 employees and contractors working around the clock to restore service.

Bradley-Bourbonnais Community High School is moving forward with plans for hybrid learning when the 2020-2021 school year begins next week.

The BBCHS School Board on Monday discussed the possibility of starting the year remotely due to COVID-19 concerns but ultimately decided to proceed with the blended back-to-school plan approved July 13.

Freshman orientation day is Aug. 19, and alternating in-person and remote attendance days for all grade levels will begin Aug. 20 and 21.

Students will be divided into two attendance groups, with A-L last names to attend school on “red” days and M-Z last names attending on “white” days. Remote learning will take place for both groups on opposite days.

School hours will be from 7:25 a.m. to noon, with class periods running 30 minutes.

All students will be offered a fully remote option, and students with special needs may receive full-time in-person instruction.

“I think we are prepared to execute the plan safely and responsibly,” Principal Brian Wright said. “And we have provisions where if things were to happen and it were to go sideways, we are ready to call it like that and go completely 100 percent remote.”

Superintendent Scott Wakeley said that in the event of another mandatory closure, the school would transition to remote learning, but there would be more flexibility this time. For example, teachers could instruct remotely from their classrooms.

“Being remote does not mean everything is shut down like it was in March ... Our teachers are better equipped,” he said. “They’re certainly not experts on teaching remote because that takes time, but they are far beyond what they were.”

The plan also outlines procedures for students and staff who become exposed to or develop symptoms of COVID-19.

Students and staff who display COVID-19 symptoms will be immediately quarantined from the rest of the school and sent home. A student or staff member who tests COVID-19 positive must meet specific criteria proving they are no longer positive to be allowed to return to school.

Additionally, students and staff who were in close contact (within 6 feet for more than 15 minutes) with an individual who tested positive must self-isolate for 14 days.

Superintendent Scott Wakeley said school leadership across the country have been feeling the pressure to make decisions on how to mitigate risks with coronavirus despite not having a medical background. Some administrators he has spoken with from other states have received death threats regarding their back-to-school decisions.

“I feel like, I have 15 years of college and I’m a school psychologist and I have several degrees in educational leadership; none of them make me qualified to make medical decisions for your family, for my family or anyone else,” he said. “But that is exactly what’s been asked of us, not only in Illinois but in this country.”

Wakeley said that some positive COVID-19 cases are inevitable with the return to school, and realistically, it might take years to be anywhere near 100 percent safe to return.

Wakely also emphasized that requiring face masks be worn at all times in school will be critical in reducing risk. Students that do not want to wear them to school would have to do remote learning instead.

“Everybody can say we want to come back,” he said. “If masks aren’t worn, we’re exposed ... If a kid comes in and says I’m not gonna [wear a mask], then they’re not getting in.”

Board President Justin Caldwell added that, just like with influenza or measles, it would not be possible to completely prevent coronavirus cases even when a vaccine is available.

“Coronavirus is here. It’s real,” Caldwell said. “I get that, but the other thing, too, if we get a vaccine, we’re foolish to think we’re not gonna have any cases for the rest of this year, all of next year and for years to come.”

The plan specifies that extracurricular activities will be allowed to resume with adherence to Illinois Department of Public Health guidelines on masks, social distancing and gathering size. Certain sports have resumed as well per Illinois High School Association guidance.

“I don’t know about you, but when I was in high school, I have lots of great memories; not all of them were algebra,” Wakeley said. “Extracurriculars are an important experience.”

Choir and orchestra students will be required to keep masks on, while band students will have specialized masks to use while playing their instruments in addition to utilizing the North Gym for social distancing.

Drivers education may also resume with masks and no more than two students and one instructor per vehicle.

“Being remote does not mean everything is shut down like it was in March ... Our teachers are better equipped."

• Visual reminders to social distance whenever possible will be posted throughout the building;

• Classrooms and common spaces will be arranged for social distancing, with desks all facing one direction in rooms;

• Masks must be worn at all times in school, even when social distancing;

• Temperature checks will be conducted upon arrival;

• Students won’t use lockers and won’t be allowed to loiter during passing periods. 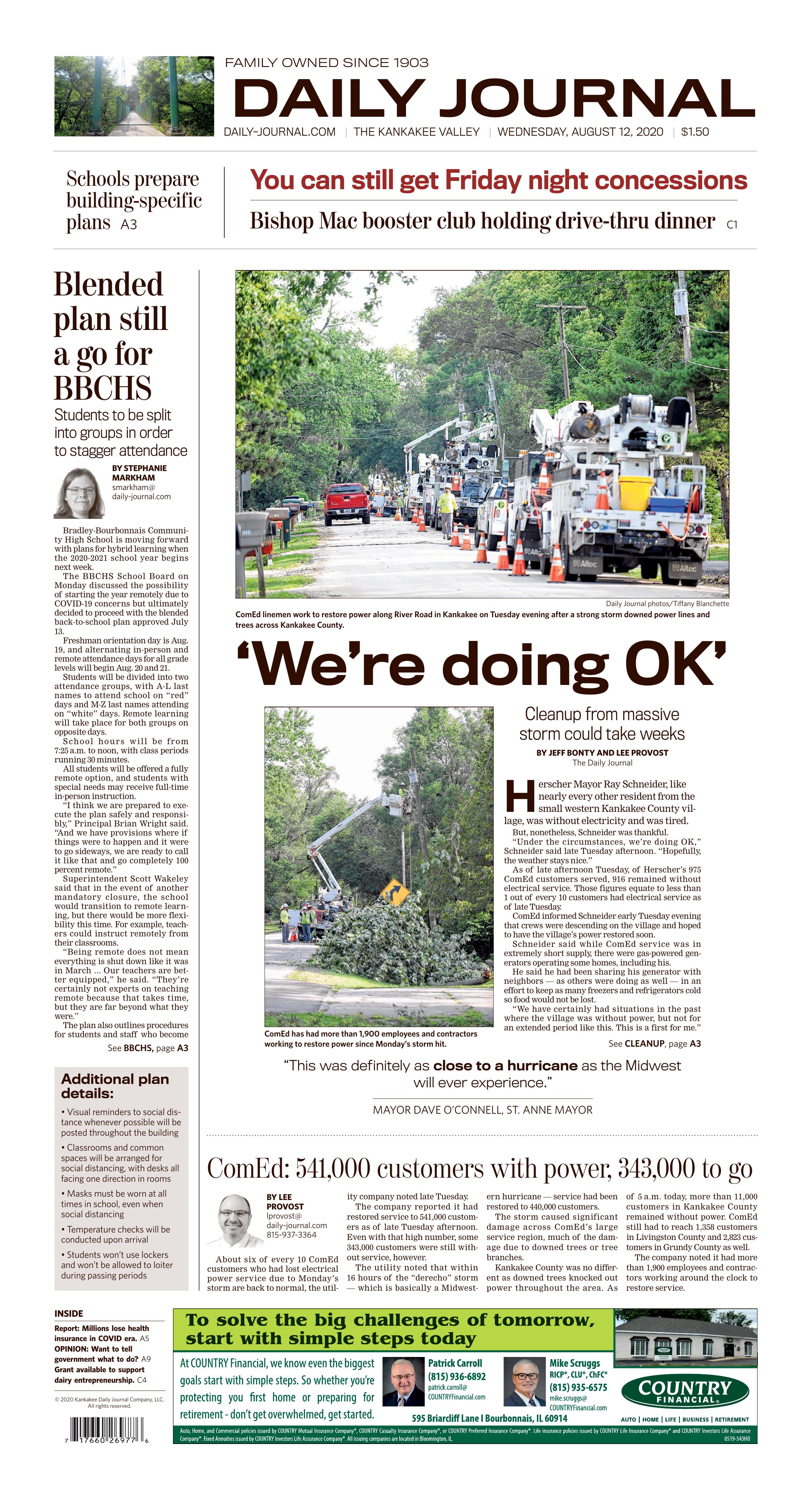