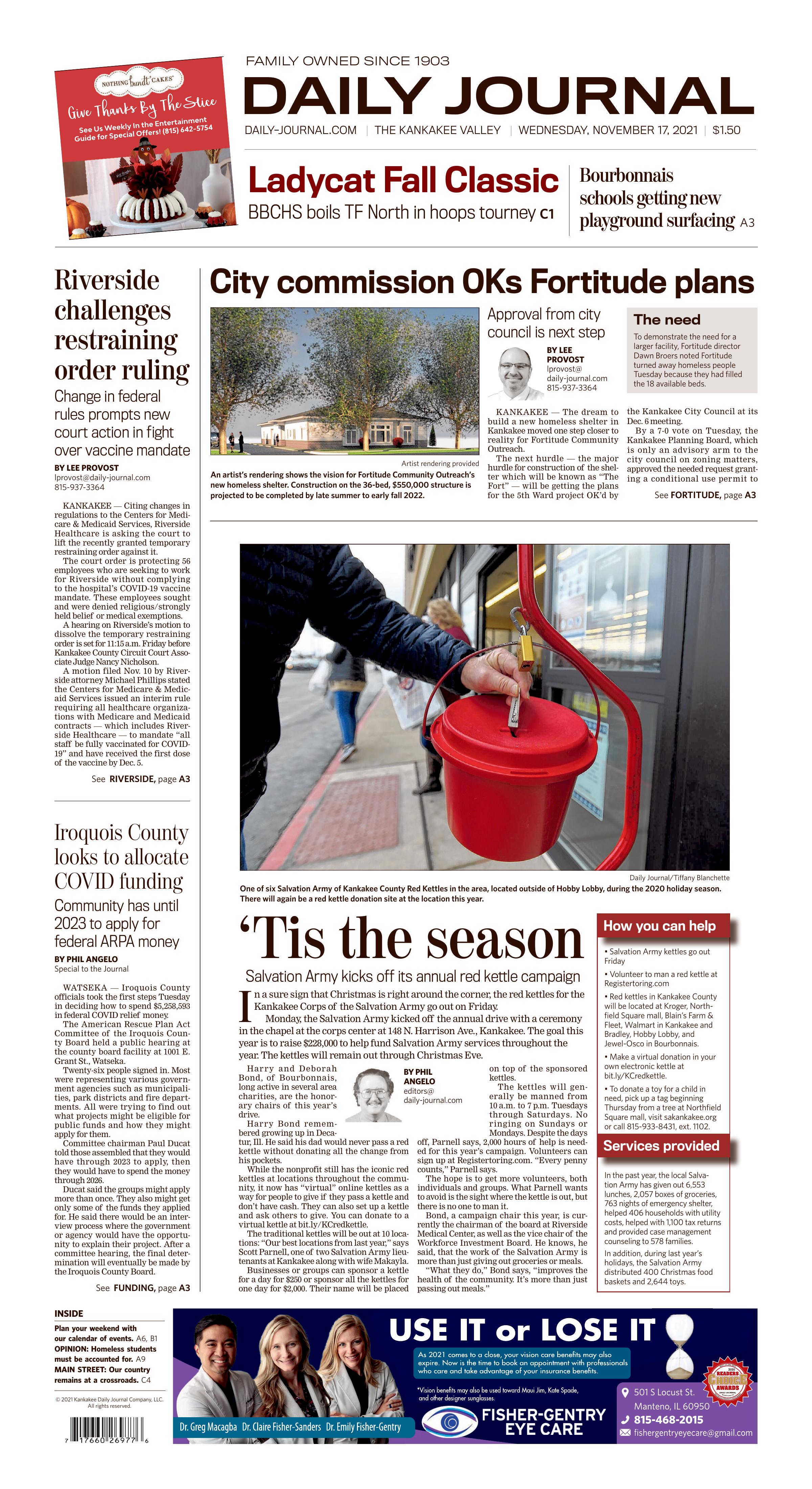 KANKAKEE — The dream to build a new homeless shelter in Kankakee moved one step closer to reality for Fortitude Community Outreach.

The next hurdle — the major hurdle for construction of the shelter which will be known as “The Fort” — will be getting the plans for the 5th Ward project OK’d by the Kankakee City Council at its Dec. 6 meeting.

By a 7-0 vote on Tuesday, the Kankakee Planning Board, which is only an advisory arm to the city council on zoning matters, approved the needed request granting a conditional use permit to operate a shelter care facility in a commercially zoned district.

Fortitude also had to have the donated residential properties rezoned from residential to commercial. The board then OK’d the permit to operate a shelter care facility within a commercial district.

At Tuesday’s hearing, Fortitude director Dawn Broers, indicated she did not see any major hurdles which would prevent the new shelter from realizing its planned Oct. 1, 2022, opening.

To demonstrate the need for a larger facility, Broers noted Fortitude turned away homeless people from the shelter Tuesday because they had filled the 18 beds.

The first year for the new site would have the shelter operating on its existing schedule of Oct. 1 to May 1.

Currently, Fortitude operates its program five nights a week out of the former St. Paul’s Lutheran School in downtown Kankakee. About a year ago, the city council put the organization on notice that it was not in favor of the shelter continuing to operate at St. Paul’s. Fortitude then began exploring other options.

The organization, which operates Kankakee County’s only homeless shelter, is targeting an April 2022 groundbreaking on two vacant lots in the 100 block of North Washington Avenue.

“Barring some major drawback, we should be able to open in October,” Broers told the board.

She was asked why the North Washington location was selected. The first reason, she explained, was the two-lot location was donated. She also noted the location is still close to needed services for the homeless and it remains close to River Valley Metro bus stops, which is a key asset.

The planned shelter will initially provide nightly care for up to 36 homeless people. Future plans consist of day-time programs and operating the shelter on a year-round basis.

Broers explained to the planning board that by having their own location, the program will be able to offer more services.

There was a late move during the hearing to place a five-year time frame on the conditional use permit. Such a restriction would have meant Broers would have had to reapply for the permit at that time to operate there.

She was asked if such a restriction would hamper fundraising for the project. She said it would.

The restriction was not made part of the conditional use permit.

Fortitude has been in existence only since April 2018. It started offering nightly shelter in January 2019 at rotating shelters in Kankakee, Bradley and Bourbonnais.

To demonstrate the need for a larger facility, Fortitude director Dawn Broers noted Fortitude turned away homeless people Tuesday because they had filled the 18 beds.

One of six Salvation Army of Kankakee County Red Kettles in the area, located outside of Hobby Lobby, during the 2020 holiday season. There will again be a red kettle donation site at the location this year.

In a sure sign that Christmas is right around the corner, the red kettles for the Kankakee Corps of the Salvation Army go out on Friday.

Monday, the Salvation Army kicked off the annual drive with a ceremony in the chapel at the corps center at 148 N. Harrison Ave., Kankakee. The goal this year is to raise $228,000 to help fund Salvation Army services throughout the year. The kettles will remain out through Christmas Eve.

Harry and Deborah Bond, of Bourbonnais, long active in several area charities, are the honorary chairs of this year’s drive.

Harry Bond remembered growing up in Decatur, Ill. He said his dad would never pass a red kettle without donating all the change from his pockets.

While the nonprofit still has the iconic red kettles at locations throughout the community, it now has “virtual” online kettles as a way for people to give if they pass a kettle and don’t have cash. They can also set up a kettle and ask others to give. You can donate to a virtual kettle at bit.ly/KCredkettle.

The traditional kettles will be out at 10 locations: “Our best locations from last year,” says Scott Parnell, one of two Salvation Army lieutenants at Kankakee along with wife Makayla.

Businesses or groups can sponsor a kettle for a day for $250 or sponsor all the kettles for one day for $2,000. Their name will be placed on top of the sponsored kettles.

The kettles will generally be manned from 10 a.m. to 7 p.m. Tuesdays through Saturdays. No ringing on Sundays or Mondays. Despite the days off, Parnell says, 2,000 hours of help is needed for this year’s campaign. Volunteers can sign up at Registertoring.com. “Every penny counts,” Parnell says.

The hope is to get more volunteers, both individuals and groups. What Parnell wants to avoid is the sight where the kettle is out, but there is no one to man it.

Bond, a campaign chair this year, is currently the chairman of the board at Riverside Medical Center, as well as the vice chair of the Workforce Investment Board. He knows, he said, that the work of the Salvation Army is more than just giving out groceries or meals.

“What they do,” Bond says, “improves the health of the community. It’s more than just passing out meals.”

How you can help

• Volunteer to man a red kettle at Registertoring.com

• Make a virtual donation in your own electronic kettle at bit.ly/KCredkettle.

In the past year, the local Salvation Army has given out 6,553 lunches, 2,057 boxes of groceries, 763 nights of emergency shelter, helped 406 households with utility costs, helped with 1,100 tax returns and provided case management counseling to 578 families.

KANKAKEE — Citing changes in regulations to the Centers for Medicare & Medicaid Services, Riverside Healthcare is asking the court to lift the recently granted temporary restraining order against it.

The court order is protecting 56 employees who are seeking to work for Riverside without complying to the hospital’s COVID-19 vaccine mandate. These employees sought and were denied religious/strongly held belief or medical exemptions.

A motion filed Nov. 10 by Riverside attorney Michael Phillips stated the Centers for Medicare & Medicaid Services issued an interim rule requiring all healthcare organizations with Medicare and Medicaid contracts — which includes Riverside Healthcare — to mandate “all staff be fully vaccinated for COVID-19” and have received the first dose of the vaccine by Dec. 5.

The legal brief states this vaccination rule “undoubtedly preempts any state law that conflicts with it,” including the basis for the temporary restraining order which is the Illinois Healthcare Right to Conscience Act.

As a result, Phillips’ motion states, Nicholson should immediately dissolve the Oct. 25 restraining order so the yet-unvaccinated staff members can meet the Dec. 5 vaccination deadline.

The legal firm representing the 56 unvaccinated Riverside employees filed a 13-page response to the hospital’s emergency motion nothing that Riverside has yet to establish policies and procedures to consider religious accommodation requests consistent with Title VII of the Civil Rights Act. Title VII prohibits employment discrimination based on race, color, religion, sex and national origin.

Attorney Jeff Schwab with the Liberty Justice Center said Riverside has no basis to terminate the employees and therefore cannot claim the restraining order conflicts with the Centers for Medicare & Medicaid Services.

If the court does not agree to dissolve the order, Riverside is asking the judge to require the employees to each post at least a $1,500 bond as they work under the protection of a temporary restraining order to offer protection to the healthcare system.

The American Rescue Plan Act Committee of the Iroquois County Board held a public hearing at the county board facility at 1001 E. Grant St., Watseka.

Twenty-six people signed in. Most were representing various government agencies such as municipalities, park districts and fire departments. All were trying to find out what projects might be eligible for public funds and how they might apply for them.

Ducat said the groups might apply more than once. They also might get only some of the funds they applied for. He said there would be an interview process where the government or agency would have the opportunity to explain their project. After a committee hearing, the final determination will eventually be made by the Iroquois County Board.

Ducat made one point a couple of times — if you have received other COVID relief money, please exhaust those funds before seeking any additional money. Also, communities are encouraged to work together on projects.

Beyond that, there are a long list of projects that do qualify:

But Johnson says, not every government project will qualify.

Ducat says his preference is to do projects that benefit “a majority of the people.”

“At the end of the day,” he said, “this is still our tax money and we should spend it the best way possible.”

One specific suggestion did come from Watseka attorney Dale Strough, who said the county should investigate whether it could install water and sewer lines on its own property and open that up for development. He also suggested solar panels of flat-roofed public buildings with an eye toward cutting down utility bills.

Other than Strough, there are relatively few questioners. Most wanted to know how the process would work.

Ducat said he was pleased with turnout. All who came were given a 15-page handout that included a grant application form.